Iran’s Revolutionary Guards unveiled a new ballistic missile on February 9. State media said that the missile, the Khaibar Shekan, had a range of 1,450 kilometers (900 miles), which could put its enemy Israel – as well as many U.S. bases in the region – well within its range. Iran’s western border is some 620 miles from Israel.

Iran’s missile program, which dates back to the monarchy, has become an increasingly important element of its military staple since the 1979 revolution, as the Islamic Republic’s warplanes became obsolete. Since the late 1980s, Iran has developed a more sophisticated arsenal that is critical to its offensive capabilities, as well as its strategy of defensive deterrence.

Iran claims that each generation of the Fateh-110 family offers improved range and accuracy:

Only the first three generations of the missile family have been used in combat. The Revolutionary Guards said that the new medium-range model, had three advantages over previous generations of missiles:

The range of the Khaibar Shekan, however, was not a game changer. Iran already has several surface-to-surface missiles with greater ranges. The Islamic Republic is the only country to develop a 2,000-km missile without first having a nuclear weapons capability. 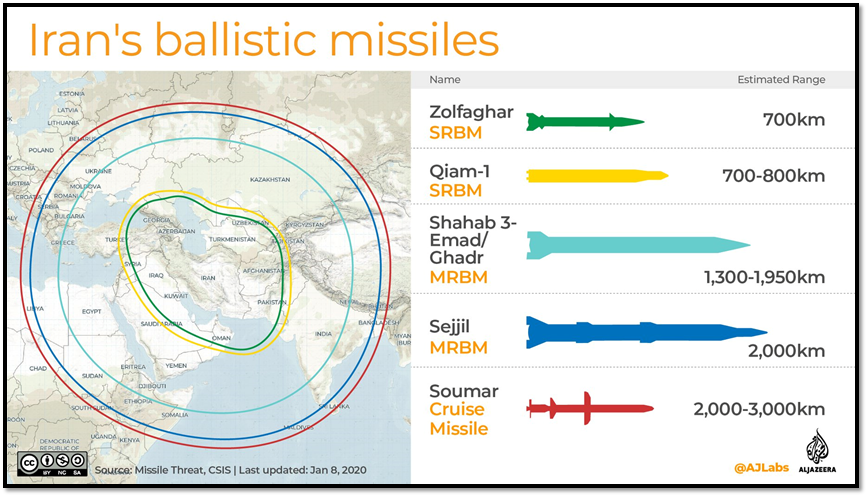 The Pentagon did not comment on the Khaibar Shekan specifically but highlighted the dangers posed by Iran’s missile arsenal, the largest and most diverse in the Middle East. Tehran is “advancing a Ballistic Missile Program that is designed for offensive purposes to inflict harm and damage,” Pentagon Press Secretary John Kirby said on February 9 when asked about the Khaibar Shekan. “We don't look at this as a messaging issue. We look at it as a legitimate national security threat issue in the region to our people, to our facilities, and to those of our allies and partners.”

Iran introduced the missile two days before the 43rd anniversary of the Islamic revolution. Iran has previously unveiled new weapons or displayed armaments, points of national pride, around the annual celebration. In 2019, for the 40th anniversary, it unveiled new drone and missile systems.

The announcement also came amid heightened tensions with Israel. Israeli leaders oppose the restoration of the 2015 nuclear deal, arguing that it does not go far enough in restricting Iran’s nuclear capabilities and that it does not address its missile program or its support for militant proxies. “The agreement will pour money, billions of dollars, into the Iranian terror machine – more UAVs, more attacks on ships, more rockets on Israel and our allies through its proxies,” Prime Minister Naftali Bennett warned on February 20.

Bennett and other Israeli officials have repeatedly pledged to maintain freedom of action against Iran even if diplomats from the world’s major powers and Iran reach a deal. In mid-January, a U.S. official attended an Israel Air Force drill simulating a strike on Iran’s nuclear program.

“The enemies of Islam, of the Revolution, and of the Islamic Republic do not understand any language except for the language of force,” Major General Mohammad Bagheri, the chief of staff of Iran’s armed forces, said during the televised unveiling ceremony for the missile.

The Revolutionary Guards did not explicitly threaten to attack Israel, but Khaibar Shekan or “Khaibar Buster,” is a reference to a famous battle between Muslims and Jews. In the seventh century, Muslim warriors conquered Jewish fortresses at the Khaibar oasis, in present-day Saudi Arabia. In 2021, Iran held a military drill named “Conquerors of Khaibar” that was intended to deter Israel and Islamic State militants. Iran also produces an assault rifle called Khaibar. Khaibar has often been referenced in anti-Israel chants across the world.

Garrett Nada, managing editor of The Iran Primer, and Brett Cohen, a research assistant at the Woodrow Wilson Center, assembled this report.