Syria has become a sporadic battlefield for Iran-backed militias, which support the Assad regime, and U.S.-led coalition forces since 2017. The following is a detailed timeline.

May 18: U.S.-led coalition forces struck Iran-backed militants that were breaching the 55-kilometer (34-mile) deconfliction zone surrounding the al Tanf Garrison in southern Syria. “This action was taken after apparent Russian attempts to dissuade Syrian pro-regime movement south towards At Tanf were unsuccessful, a coalition aircraft show of force, and the firing of warning shots,” U.S. Central Command said in a statement. The deconfliction zone had been established in 2016 as part of an understanding between the United States and Russia. 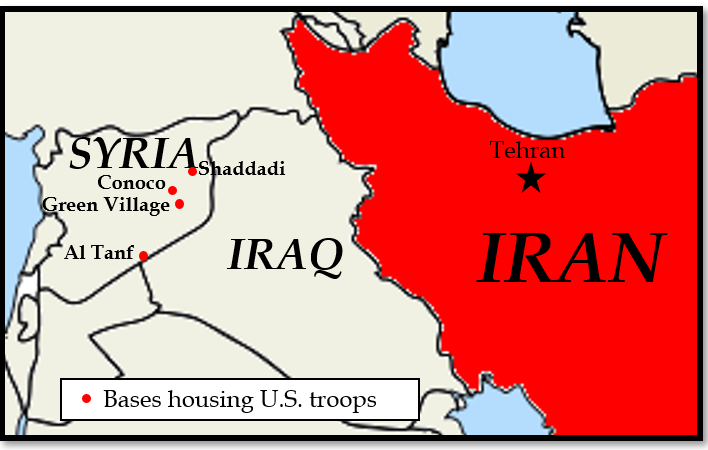 June 8: Two armed trucks advanced toward U.S.-led coalition forces within the deconfliction zone surrounding al Tanf. Coalition forces destroyed the vehicles, which were driven by Iran-backed forces. Later in the day, a U.S. F-15E fighter jet shot down an Iranian-made Shahed-129 drone that had dropped a weapon near coalition and partner forces in southern Syria. The drone, which was carrying additional weapons, missed its target, and no casualties were reported.

June 20: A U.S. F15-E fighter jet shot down an Iranian-made Shahed-129 drone near al Tanf. The United States intercepted the armed drone after it advanced on coalition forces.

February 7:  Around 500 pro-Assad regime fighters initiated an unprovoked attack against the headquarters of the Syrian Democratic Forces (SDF) --  a Kurdish-led militia working with coalition forces -- in eastern Syria while coalition service members, including a team of about 30 U.S. Special Forces, were reportedly present. About “20 to 30 artillery and tank rounds landed within 500 meters” of the headquarters, said U.S. Army Colonel Thomas Veale, a spokesperson for the coalition. Coalition forces struck the attackers in self-defense.

The pro-regime forces suffered heavy casualties; at least 100 fighters were reportedly killed. Though initial reports did not provide a breakdown of the pro-regime forces, an investigation by German magazine Der Spiegel later revealed that the fighters included members of Iran-backed militias. Additionally, some 300 private military contractors linked to a Russian firm were reportedly killed or injured.

The airstrikes were in response to a rocket attack against the K1 military airbase near Kirkuk in northern Iraq on December 27, the Pentagon said. One U.S. civilian contractor was killed, and four American and two Iraqi service members were wounded.

February 16: An Iranian-backed militia group reportedly breached the deconfliction zone surrounding al Tanf before being repelled by Maghaweir al Thowra, a U.S.-backed Syrian opposition group. U.S. forces were present at the base at the time of the attack.

Feb. 25: The United States conducted airstrikes in eastern Syria against Iran-backed militias in the first military action by the Biden administration. The Pentagon said that warplanes struck “several facilities” used by Kataib Hezbollah and Kataib Sayyid al Shuhada, two Iraqi Shiite militias trained, armed and funded by Iran. The facilities were located near the Abu Kamal border crossing on the Syrian side of the border with Iraq. The exact death toll was unclear; Kataib Hezbollah claimed that one of its fighters was killed, while a Britain-based monitor claimed that at least 22 militants had been killed. On March 1, the Pentagon said that one fighter was killed and two others were injured.

The airstrikes were in response to three separate rocket attacks against U.S. and partner forces in Iraq earlier in the month. The deadliest attack occurred on February 15, when rockets hit the Erbil Air Base that houses U.S. troops in Iraq’s Kurdistan region. One Filipino contractor was killed, and a U.S. service member and eight other contractors were wounded.

June 27: The United States conducted airstrikes against three targets operated by two Iraqi militias—Kataib Hezbollah and Kataib Sayyid al Shuhada—that are trained, armed, funded and sometimes directed by Iran. F-15 and F-16 fighters targeted operational and weapons storage facilities at two locations in Syria and one location in Iraq. Reports of the death toll were inconsistent; Iraqi military officials told The Associated Press that four men were killed in Syria, while a Britain-based monitor reported that at least seven were killed.

The U.S. strikes were in response to a string of at least six drone attacks attributed to Iraqi militias since April 2021. No casualties were reported. In a statement about the U.S. strikes, Pentagon Press Secretary John Kirby said that the United States “took necessary, appropriate, and deliberate action designed to limit the risk of escalation - but also to send a clear and unambiguous deterrent message.”

June 28: U.S. forces were attacked by multiple rockets, a coalition spokesperson said in a tweet. Syrian and Iranian media reported that eight rockets were fired at U.S. forces near the Omar oil fields. The United States reportedly returned artillery fire toward the origin of the attack. No casualties were reported. No group claimed responsibility, but social media channels used by Iran-backed militias circulated video footage of the attack.

July 10: Indirect fire targeted U.S. forces at Conoco in northeast Syria. No injuries or damage were reported. No group claimed responsibility for the attack, but experts aid that the incident fit a pattern of other attacks allegedly perpetrated by Iran-backed groups.

October 20: The U.S. base at al Tanf in southern Syria was hit by drones and rockets in a “deliberate and coordinated attack,” Central Command said. Iran appeared to be responsible for the attack, which included up to five drones carrying explosives, U.S. officials told the Associated Press. The drones were Iranian but were launched from within Syria, officials told CBS News.

The U.S. military was warned about the attack and evacuated some 200 troops on C-130 military transport planes. Only about two dozen remained at al Tanf but were unharmed, although bomb fragments were found near sleeping quarters and guard posts, according to Fox News. The Pentagon did not specify the source of the warning.

Fars News Agency, an Iranian outlet tied to the Revolutionary Guards, attributed the attack to the “Allies of Syria,” a little-known group of pro-Iran militias formed in 2015. The “Allies of Syria” was attacked, reportedly in an Israeli airstrike, near Palmyra in central Syria on October 13. In a statement, it claimed that the attack came from the direction of al Tanf and vowed “very harsh” retaliation. Israel has reportedly carried out hundreds of strikes on Iran-linked targets in Syria since the civil war broke out in 2011.

December 15: A British Typhoon fighter jet shot down one of two small drones that penetrated the al Tanf deconfliction zone. No damage or casualties were reported. U.S. Central Command did not speculate as to who owned the drones.

December 31: Coalition forces were targeted by indirect fire near Shaddadi in northeastern Syria. The rounds impacted civilian areas and did not damage any coalition areas. The SDF detained four people suspected of involvement in the attack. No group claimed responsibility.

January 5: An Iran-backed militia fired eight rockets at the Green Village in northeast Syria. The rockets caused minor damage to the base, but no casualties were reported “The Iran-backed malign actors fired on the Coalition from within civilian infrastructure with no regard for civilian safety.” U.S. Central Command said in a statement. Coalition and SDF forces responded by firing six rounds of artillery.

May 17: Iran-backed forces attacked Patrol Base Shaddadi, according to Operational Inherent Resolve, which did not publicize details.

July 26: Four rockets were fired near Patrol Base Shaddadi, a base hosting U.S. forces in northeastern Syria. No casualties or damage were reported. "The attempted strikes were ineffective and landed well outside the Coalition base. Our Syrian Democratic Partners quickly responded to the incident and have the lead for any further response” a senior coalition official reportedly said. No group claimed responsibility.

August 15: Two drones approached the al Tanf Garrison, a remote outpost in southern Syria. Coalition forces intercepted one drone, but a second one detonated in a compound used by Maghaweir al Thowra,  a U.S.-backed Syrian opposition group. No casualties or damage were reported, Operational Inherent Resolve said in a statement. The Pentagon later said the drones, produced in Iran, were launched from Babil, Iraq by Iran-backed groups.

In a separate incident, militants fired rockets at the Green Village. “Thankfully on this occasion, there were no casualties and no damage reported. However, attacks like this risk both the lives of innocent civilians and important infrastructure due to their indiscriminate nature,” Maj. Gen. John Brennan, the commander of Operation Inherent Resolve, said.

U.S. Central Command later attributed both attacks to Iran-backed groups. “Such attacks put the lives of innocent Syrian civilians at risk and undermine the significant efforts by our Partner Forces to maintain the lasting defeat of ISIS,” Brennan said. “Coalition personnel retain the right to self-defense, and we will take appropriate measures to protect our forces.”

August 23: U.S. warplanes struck nine bunkers in eastern Deir Ezzor province. The targets had reportedly been used for ammunition storage and logistics support by Iran-backed groups. A Britain-based monitor said that at least six militants were killed. The airstrikes were in response to attacks on U.S and partner forces on August 15. The United States does not want Iran to “draw the wrong conclusion that they can continue just doing this and get away with it,” said Colin Kahl, under secretary of defense for policy.

In response, U.S. forces used helicopters, gunships and artillery to destroy three vehicles and rocket launchers used in the previous attack. Two or three militants were killed, according to the Pentagon. U.S. warplanes and artillery later fired on militants preparing to launch rockets. One additional militant was killed.

Research assistants Katelyn Balke, from the Woodrow Wilson Center, and James Motamed, from the U.S. Institute of Peace contributed to the timeline.