Seven years after it was negotiated, Iranian public opinion was split on the 2015 nuclear deal. Some 48 percent disapproved of the agreement while 47 percent approved of it, according to a new poll by the Center for International and Security Studies at Maryland (CISSM) and IranPoll. The deal had a much higher approval rating – 76 percent – in mid-2015, when Iran and the world's six major powers concluded two years of diplomacy. It subsequently declined in popularity because it failed to deliver the economic benefits promised in the deal.

IranPoll surveyed a nationally representative sample of 1,014 Iranians from June 22 to July 3, 2022. Unless specified otherwise, the results were based on the full sample and the margin of error was 3.1 percent. The following are key results. 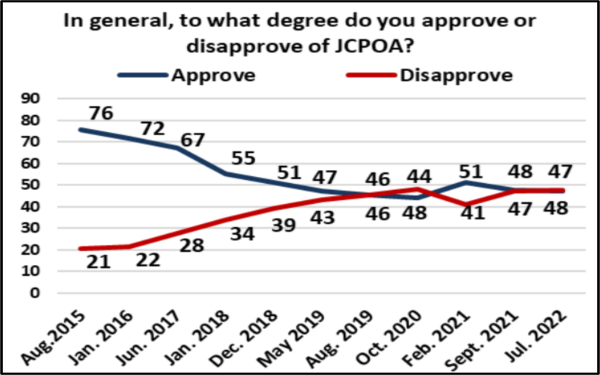 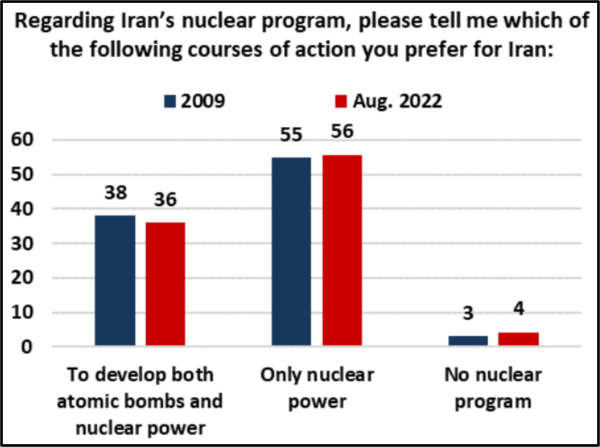 Why do you think Iran should develop atomic bombs?

*(Only asked respondents who said that Iran should develop nuclear weapons, answers were open-ended)

Some say developing nuclear weapons is against the teachings of Islam and some disagree and say Islam does not prohibit the development of nuclear weapons. Which of these views is closer to yours?