On August 10, the Justice Department announced charges against an Iranian national for plotting to murder John Bolton, who served as national security advisor to President Donald Trump from 2018 to 2019. Shahram Poursafi, 45, planned the operation, “likely in retaliation” for the U.S. assassination of General Qassem Soleimani, the commander of Iran’s elite Qods Force. Soleimani was killed in a U.S. drone strike in Baghdad in early 2020.

The Biden Administration “will not waiver in protecting and defending all Americans against threats of violence and terrorism,” National Security Advisor Jake Sullivan said. “Should Iran attack any of our citizens, to include those who continue to serve the United States or those who formerly served, Iran will face severe consequences.” 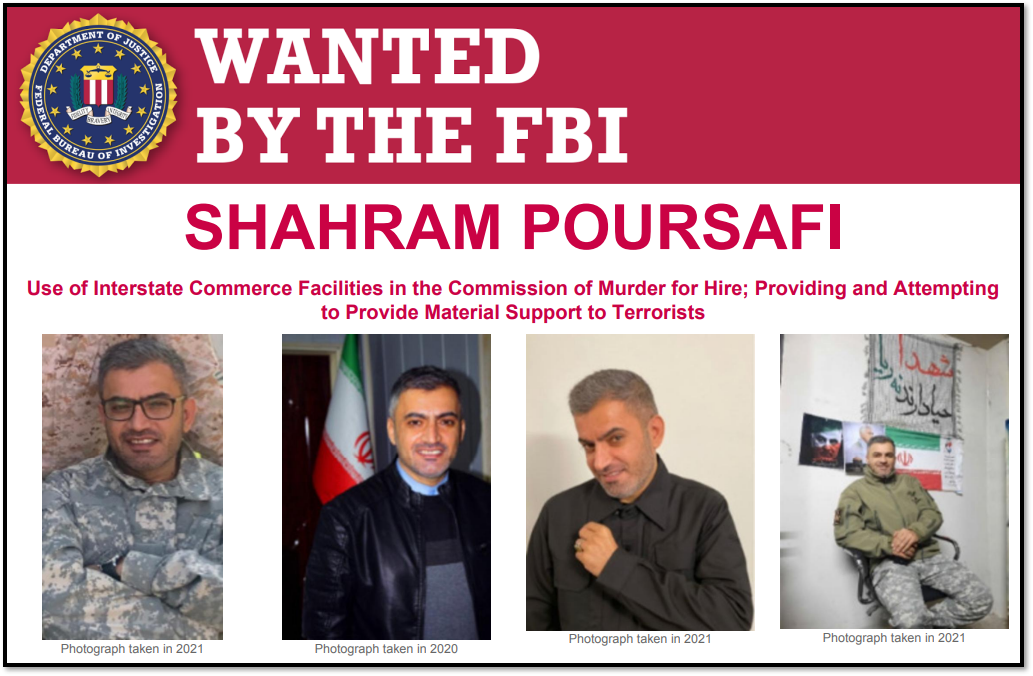 Poursafi is allegedly a member of the Islamic Revolutionary Guard Corps (IRGC). Messages from his online accounts suggest that he was in Tehran while trying to hire people in the United States for the mission. The murder was to occur in Washington, D.C. or Maryland.

In November 2021, the indictment states, Poursafi offered $250,000 to an unnamed individual to “eliminate” Bolton. The amount was later upped to $300,000. In December 2021, he sent a photograph of two plastic bags appearing to contain stacks of U.S. currency. In April 2022, Poursafi sent $100 to the individual’s cryptocurrency wallet to prove payment could be made.

Poursafi also mentioned that he had a second job for $1 million. The Justice Department did not specify who the target was beyond a former “high-ranking” Trump Administration official. Former Secretary of State Mike Pompeo was reportedly a target of that plot, according to Axios.

Tehran denied the allegations. Iran “strongly warns against any action against Iranian citizens under the pretext of these ridiculous accusations,” Foreign Ministry Spokesperson Nasser Kanaani said.

Iranian officials have repeatedly pledged revenge for the death of Soleimani, who was considered a military hero for directing Iranian military operations across the Middle East. In 2021, Iran sanctioned Bolton and other senior U.S. officials in connection with the assassination and for “their role in terrorist and anti-human rights activities against Iran and its citizens.” Bolton long advocated for regime change in Tehran and the use of military force against the Islamic Republic.

Bolton responded with a sharp statement attacking Iran’s leaders. “While much cannot be said publicly right now,” he wrote, “one point is indisputable: Iran’s rulers are liars, terrorists, and enemies of the United States. Their radical, anti-American objectives are unchanged; their commitments are worthless; and their global threat is growing.” He also thanked the Justice Department, the FBI and the Secret Service for protecting him and other Americans. The following is a video statement from the Justice Department and the FBI, the Justice Department press release, and Bolton's statement.

Video statement from the Justice Department and the FBI:

An Iranian national and member of Iran’s Islamic Revolutionary Guard Corps (IRGC) was charged by complaint, unsealed today in the District of Columbia, with use of interstate commerce facilities in the commission of murder-for-hire and with providing and attempting to provide material support to a transnational murder plot.

According to court documents, beginning in October 2021, Shahram Poursafi, aka Mehdi Rezayi, 45, of Tehran, Iran, attempted to arrange the murder of former National Security Advisor John Bolton, likely in retaliation for the January 2020 death of Iran’s Islamic Revolutionary Guard Corps – Qods Force (IRGC-QF) commander Qasem Soleimani. Poursafi, working on behalf of the IRGC-QF, attempted to pay individuals in the United States $300,000 to carry out the murder in Washington, D.C. or Maryland.

“The Justice Department has the solemn duty to defend our citizens from hostile governments who seek to hurt or kill them,” said Assistant Attorney General Matthew G. Olsen of the Justice Department’s National Security Division. “This is not the first time we have uncovered Iranian plots to exact revenge against individuals on U.S. soil and we will work tirelessly to expose and disrupt every one of these efforts.”

“Iran has a history of plotting to assassinate individuals in the U.S. it deems a threat, but the U.S. Government has a longer history of holding accountable those who threaten the safety of our citizens,” said Executive Assistant Director Larissa L. Knapp of the FBI’s National Security Branch. “Let there be no doubt: The FBI, the U.S. government, and our partners remain vigilant in the fight against such threats here in the U.S. and overseas.”

“Iran’s Islamic Revolutionary Guard Corps, through the Defendant, tried to hatch a brazen plot: assassinate a former U.S. official on U.S. soil in retaliation for U.S. actions,” said U.S. Attorney Matthew M. Graves for the District of Columbia. “Iran and other hostile governments should understand that the U.S. Attorney’s Office and our law enforcement partners will do everything in our power to thwart their violent plots and bring those responsible to justice.”

“An attempted assassination of a former U.S. Government official on U.S. soil is completely unacceptable and will not be tolerated,” said Assistant Director in Charge Steven M. D’Antuono of the FBI Washington Field Office. “The FBI will continue to identify and disrupt any efforts by Iran or any hostile government seeking to bring harm or death to U.S. persons at home or abroad. This should serve as a warning to any others attempting to do the same – the FBI will be relentless in our efforts to identify, stop, and bring to justice those who would threaten our people and violate our laws.”

On Nov. 9, 2021, Poursafi contacted the CHS on an encrypted messaging application, and then directed the CHS to a second encrypted messaging application for further communications. Poursafi offered the CHS $250,000 to hire someone to “eliminate” the former National Security Advisor. This amount would later be negotiated up to $300,000. Poursafi added that he had an additional “job,” for which he would pay $1 million.

Poursafi directed the CHS to open a cryptocurrency account to facilitate payment, but stipulated that the CHS would likely have to carry out the murder before he/she could be paid. He further explained to the CHS that if he/she was paid and the murder was not completed, Poursafi’s “group” would be angry. A later search of one of Poursafi’s online accounts revealed pictures of Poursafi wearing a uniform with an IRGC patch. During their communications, the CHS made several references to Poursafi being associated with IRGC-QF. Poursafi never denied his involvement with IRGC-QF.

On Nov. 14, 2021, the CHS asked Poursafi for help locating the former National Security Advisor. Poursafi subsequently provided the CHS with the target’s work address in Washington, D.C. According to results from the search of one of Poursafi’s online accounts, on Nov. 25, 2021, Poursafi took screenshots of a map application showing a street view of the former National Security Advisor’s office. One screenshot noted that the address was “10,162 km away,” which is the approximate distance between Washington, D.C. and Tehran, Iran.

Poursafi also advised the CHS to communicate about the plot in construction and building terms.  For example, when the CHS asked Poursafi to specify how the murder was to be carried out, Poursafi told the CHS that he only asked the CHS to build a structure, but the method of construction was up to the CHS.

On Dec. 29, 2021, Poursafi asked the CHS when the murder would be carried out and informed the CHS that his “group” wanted it done quickly.

On Jan. 3, 2022, Poursafi noted he was under pressure from “his people” to complete the murder and that Poursafi had to report any delays. The CHS asked Poursafi how many people were involved. Poursafi told the CHS that he only had to report to one person, but that there was a chain of command to whom his superior reported. That same day, Poursafi expressed regret that the murder would not be conducted by the anniversary of Qasem Soleimani’s death. He stated he was concerned that if it was not carried out soon, the job would be taken from Poursafi and the CHS. Poursafi counseled the CHS that if he/she used a “small weapon,” he/she would have to get close to the target, but if he/she used a “larger weapon,” he/she could stay farther away.

On Jan. 18, 2022, the CHS sent Poursafi publicly available information that suggested the former National Security Advisor might be travelling out of the Washington, D.C., area during the time Poursafi indicated he would like the CHS to carry out the murder. Poursafi told the CHS that he needed to “check something.” Within an hour, he told the CHS that the target was, in fact, not travelling. He then provided the CHS with specifics regarding the former National Security Advisor’s schedule that do not appear to have been publicly available.

On Jan. 21, 2022, Poursafi told the CHS that after successful completion of the first “job,” he had a second “job” for the CHS and informed the CHS that surveillance of the second target was complete. Poursafi said the information was gathered “from the United States,” not “via Google,” indicating someone working on behalf of the IRGC-QF had already conducted pre-operational surveillance on the second target in the United States.

On Feb. 1, 2022, Poursafi told the CHS that if he/she did not eliminate the target within two weeks, the job would be taken from the CHS. He also informed the CHS that someone checked the area around the former National Security Advisor’s home, and he believed there was not a security presence, so the CHS should be able to “finish the job.”

On March 10, 2022, Poursafi told the CHS he had another assassination job for the CHS in the United States, but to “keep [the former National Security Advisor] in the back of your mind.” Approximately one month later, Poursafi encouraged the CHS to accept this offer, explaining that if it was done successfully, Poursafi would be able to ingratiate himself with his “group” and regain the tasking to murder the former National Security Advisor.

On April 28, 2022, the CHS told Poursafi that he/she would not continue to work without being paid. Poursafi agreed to send the CHS $100 in cryptocurrency to a virtual wallet the CHS created earlier that day, to prove payment could be made. Later that day, the cryptocurrency wallet received two payments totaling $100.

We have said this before and we will say it again:  the Biden Administration will not waiver in protecting and defending all Americans against threats of violence and terrorism.  Should Iran attack any of our citizens, to include those who continue to serve the United States or those who formerly served, Iran will face severe consequences.  We will continue to bring to bear the full resources of the U.S. Government to protect Americans.

We commend the Department of Justice and the Federal Bureau of Investigation for their diligence and professionalism in this matter.

I wish to thank the Justice Dept for initiating the criminal proceeding unsealed today; the FBI for its diligence in discovering and tracking the Iranian regime’s criminal threat to American citizens; and the Secret Service for providing protection against Tehran’s efforts. pic.twitter.com/QDjkX6gUWM