Human Rights: Iran’s intelligence ministry announced the arrest of an unspecified number of members of the Baha’i faith with links to a Baha’i religious center in Israel. The individuals were arrested for allegedly spreading propaganda and proselytizing in schools. The Islamic Republic considers the Baha’is members of a heretical sect.

Economy: The United States sanctioned six companies for helping to sell millions of dollars’ worth of Iranian oil and petrochemical products to East Asian buyers. “Until Iran is ready to return to full implementation of the JCPOA (Joint Comprehensive Plan of Action), we will continue to use our sanctions authorities to target exports of petroleum, petroleum products, and petrochemical products from Iran,” Secretary of State Antony Blinken said.

Nuclear: “Iran has the technical ability to build an atomic bomb, but such a program is not on the agenda,” Mohammad Eslami, the head of the Atomic Energy Organization of Iran (AEOI), said.

Nuclear: AEOI spokesperson Behrouz Kamalvandi said that Iran had injected gas into “hundreds” of new centrifuges, cylindrical machines that enrich uranium, including both first-generation IR-1s and advanced IR-6s. A single IR-6 has a claimed output of more than 10 times the output of an IR-1.

Diplomacy: The foreign ministry said that Tehran conveyed its views of a new draft deal to restore the JCPOA proposed by E.U. foreign affairs chief Josep Borrell. “There will likely be a new round of Iran talks,” Foreign Ministry Spokesman Nasser Kanaani said.

Diplomacy: Secretary of State Antony Blinken appeared to back the new E.U. proposal to revive the JCPOA. “It's very consistent with something that they put forward in March that we've we agreed to, that we would pursue it in March,” he told reporters. “But it remains to be seen whether Iran is willing and able to move forward.”

United States and China: Iran’s foreign ministry condemned the visit of Nancy Pelosi, the Speaker of the House of Representatives, to Taiwan. “The Islamic Republic of Iran views respect to the territorial integrity of countries as the basis of its foreign policy, and support for one-China policy in this framework is unquestionable.”

International: The U.S. Department of Justice requested the seizure of a Boeing 747 cargo plane grounded in Argentina. Mahan Air, an Iranian airline under U.S. sanctions for links to terrorism, had sold the U.S.-made jet to a Venezuelan company, also under U.S. sanctions, in violation of U.S. export control laws.

Diplomacy: E.U. diplomat Enrique Mora said that he was traveling to Vienna to convene a new round of talks based on Borrell’s text. Robert Malley, the U.S. special envoy for Iran, said that he was heading to Vienna with expectations “in check.” Ali Bagheri Kani, Iran’s chief negotiator, said that the onus was still on the United States.

Preparing to travel to Vienna for talks on basis of @JosepBorrellF's text. Our expectations are in check, but the United States welcomes EU efforts and is prepared for a good faith attempt to reach a deal. It will shortly be clear if Iran is prepared for the same.

Diplomacy: Two-thirds of Americans likely to vote support a new agreement to limit Iran’s nuclear program, according to a poll by Data for Progress conducted July 8 to 11, 2022. Eighty percent of 1,330 respondents were “very concerned” or “somewhat concerned” about Iran developing the capability to produce a nuclear weapon. 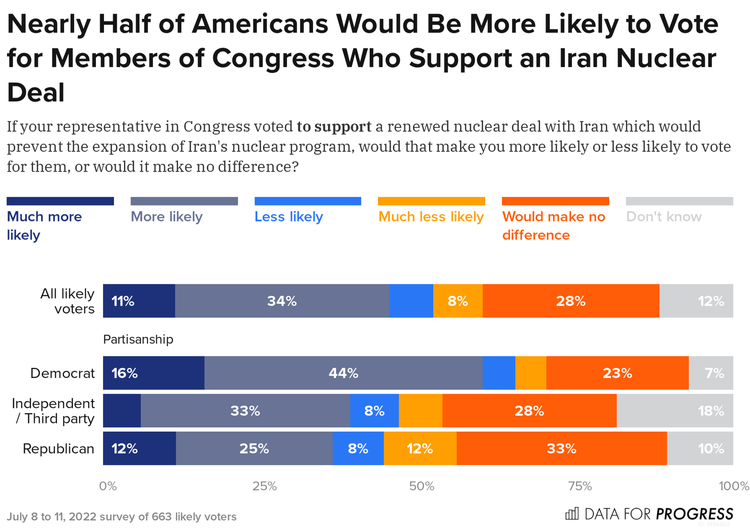 Human Rights: U.S. National Security Advisor Jake Sullivan spoke with Masih Alinejad, an Iranian-American human rights activist, and her husband Kambiz Foroohar following the arrest of an armed man outside their home in New York. Sullivan "affirmed that the U.S. Government will use all tools at its disposal to disrupt and deter threats from Iran, including those which target U.S. citizens and dissidents living in the United States."