On September 13, Toomaj Salehi, a popular young rapper, was arrested at his home in Isfahan and charged with propaganda against the regime. Salehi gained popularity for his songs—such as “Normal Life,” released in June 2021—that spotlighted poverty, corruption and repression in Iran. His detention prompted a local and international outcry. On social media, thousands of Iranians—including Hichkas, a pioneer in Iranian rap—demanded his release. Amnesty International called on Iran to unconditionally free Salehi, “a dissident rap artist detained solely for exercising his right to freedom of expression. In his songs, he spoke out against repression, corruption, poverty and impunity & called for accountability.” Salehi was released on bail on September 21, while awaiting trial.

Salehi’s case is a microcosm of the cleavages in Iranian society four decades after the 1979 revolution. His dedicated online following and popularity among youth contrasts sharply with the regime’s aging leaders. More than 60 percent of Iran’s 85 million people have been born since the revolution. Many are more concerned with personal freedoms and economic survival than revolutionary ethos. Salehi’s lyrics also reflect a deep-seated dissatisfaction with the standard of living. In 2021, a majority of Iranians described the economic situation as “very bad,” and a similar majority cited domestic mismanagement and corruption as having a more negative impact on the economy than U.S. sanctions.

For the two generations of Iranians born after the revolution, music has gradually become an important space for rebellion. All forms of music were initially banned after the revolution. In the 1990s, the regime began to allow limited pop, rock and folk music that conformed to the government’s strict moral standards. In the early 2000s, the rise of rap, spearheaded by figures such as Hichkas, created a new audience for songs that criticized the regime and reflected the struggles of everyday Iranians. The lyrics in Salehi’s songs became controversial because of the political overtones. 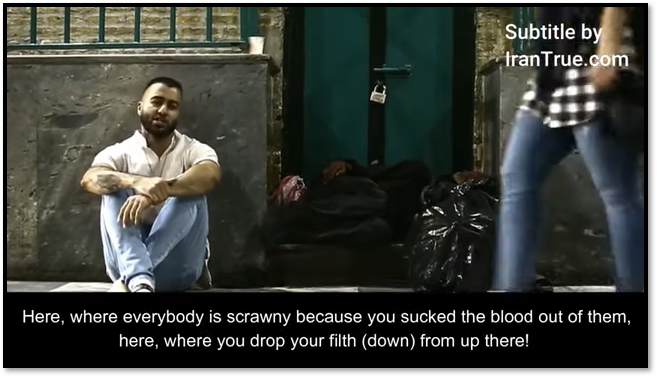 In “Normal,” he raged about the gap between Iran’s elite and the oppressed.

Here people are only alive.
They don’t have a life.
Our children sleep hungry at night.
Excuse me, but how does your conscience sleep at night?

In “Mouse Hole” (Soorakh Moosh), he rapped about groups complicit in Iran’s corruption:

There’s no neutrality in this war,
If you covered your eyes your hands are drenched with blood .
You’re a traitor if you have a platform but your words reek of lies.

Before his arrest, Salehi, who had been employed in a metalwork factory, publicly alleged that the government wanted to detain him. “I am not afraid of death, imprisonment, and torture,” he tweeted, “What I fear is to see women sell their bodies out of want and shut my mouth. I am afraid of watching people bend into the trash bin up to their waist [to find food] but remain silent; to see you beat a worker and stay quiet; to witness your killing of a protester and torturing of his justice-seeking family, and shut up… There’s a sea of blood between you and me.”

Saleh’s lyrics have even dared to mention religious dogma, including references to the core Shiite belief that a hidden imam, or “mahdi,” will someday return for the Last Judgment. In one song, he wrote, “We’re the saviors of our time, our own Hidden Imam.” After he was released on bail, he issued a video thanking his followers for being his voice. “When I was [in detention], I kept wondering who was even thinking about me right now,” he said emotionally. “But when I was [released], I realized [that I had been wrong].” The following are videos and excerpted translations from Salehi’s best known or most political songs.

If you saw people’s pain but looked away,
If you saw the suppression of the oppressed but walked right past,
If you did it out of fear or for your own interests,
You’re the hand of the tyrant, you’re a criminal too.

If you put yourself to sleep when they raided houses,
If you’re worried about your money when they’re taking youth,
If you play the middle and say “politics, what’s that?”
Just know there are no blank votes, there’s no neutrality in this war.

If you covered your eyes, your hands are drenched with blood,
You’re a traitor if you have a platform but your words reek of lies,
Though you’re far from the homeland, we still see.
Remember, filth always leaks even from behind the clouds.

If you covered up murders, you’re equally guilty,
To cover up crimes, you’re walking through blood,
Without your cover-ups this regime is incomplete,
Iran has so many prisons that you would all fit in.

The laborer is a pomegranate, squeeze it!
Give him bread and water, just enough to stay alive.
Slavery system is the prison!

The laborer is a pomegranate, suck his blood, throw its peel away!
We shouldn't see its growing tree.

Human (life) is cheap, the laborer is a pomegranate, Iran is a wealthy, fertile land.
You (the Islamic Republic) are the only ruler, you're both the criminal and the judge.

I'm the voice of division and poverty, supporter of striking and (seeking) rights.
(I'm) narrator of battles and protests until freedom in revolution time.

The song is about the March 2021 agreement between Iran and China. But the title refers to the 1828 Treaty of Torkmanchay, which forced Iran to cede territory in the South Caucasus to Russia after the Russo-Persian War.

Shameless, whore, arrogant with no money, toxic, corrupt, aloof,
If you’re a theocratic regime, why are you China’s servant?
Why do you take it from us and give it as payment to your enemy?
Why do you always deviate from your “straight line”? Why do your always hang your critics?

Brett Cohen is a research assistant at the Woodrow Wilson Center.