Human Rights: Iran executed more than 250 people in 2020 and at least 230 in 2021 so far, the U.S. special rapporteur for Iran, Javaid Rehman, told the U.N. General Assembly. He noted that the regime had executed minors in both years.

United States: Iran appeared to be responsible for the attack on the U.S. base at al Tanf in southern Syria, U.S. officials told the Associated Press. The drones used in the strike were Iranian but were launched from within Syria, officials told CBS News.

Nuclear: Iran began feeding uranium gas enriched to 20 percent into a single IR-6 centrifuge at the Natanz facility outside Isfahan, the International Atomic Energy Agency reported. Iran was already enriching small amounts of uranium to 60 percent purity—far above the cap of 3.67 percent set by the JCPOA—at Natanz. Iran could learn more about the enrichment process by feeding advanced IR-6 centrifuges, which are faster and more efficient than previous models. Iran was not retaining the enriched uranium, the agency noted, but the move prompted the IAEA to “increase the frequency and intensity of its safeguards activities” at the facility. Uranium enriched to 90 percent or above is considered weapons-grade.

Cyber: A cyberattack disabled government-issued cards that allow many Iranians to buy subsidized fuel. Sales at some 4,300 gas stations nationwide were disrupted. No group or country claimed responsibility.

Nuclear: During a trip to Europe, President Joe Biden will aim to form a “united front [with European partners] after four years of division on Iran policy in the last administration,” National Security Advisor Jake Sullivan said. Biden was slated to participate in the Group of 20 (G20) conference in Rome on October 30-31 and then the U.N. Climate Change Conference (COP26) in Glasgow.

Syria: Iranian firm Peymanir struck a $115 million agreement with Syria’s electricity ministry to restore the Mhardeh power plant. A Syrian-state outlet said that rehabilitating the plant will take 26 months and result in 576 megawatts in energy-production capabilities. 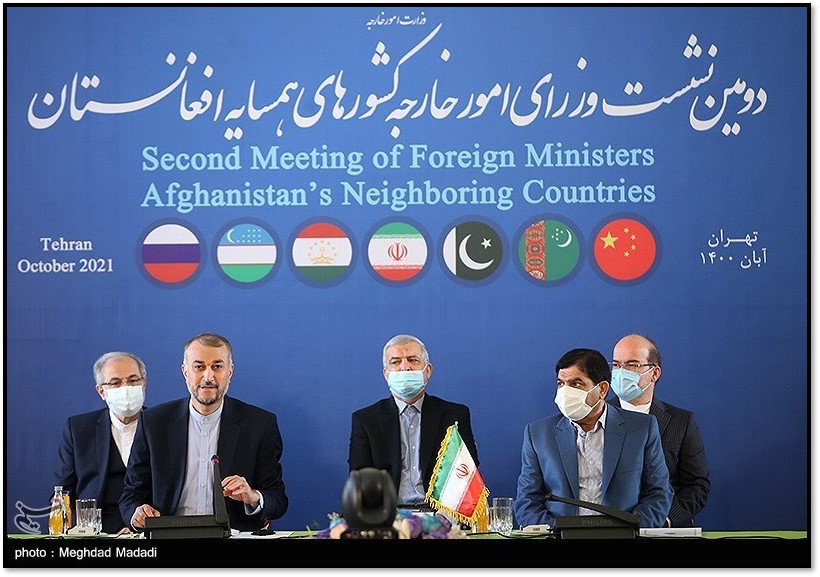 Afghanistan: Iran will strive to help improve the security and economic situation in Afghanistan, Foreign Minister Hossein Amir-Abdollahian wrote in an op-ed in the Tehran Times. He highlighted efforts by Iran to coordinate efforts by Afghanistan’s neighbors to help stabilize the country following the U.S. withdrawal and Taliban takeover. “The neighboring countries want a stable, secure, and economically prosperous Afghanistan, emphasizing the fact that the issue of displaced people and the livelihood of Afghanistan's people required intense attention in the short-term.”

On the following day, Iran hosted the foreign ministers of the six countries bordering Afghanistan and Russia to discuss the situation in Afghanistan. Ministers from Pakistan, Tajikistan, Uzbekistan and Turkmenistan traveled to Tehran. The Chinese and Russian diplomats joined via video link. In a joint statement, the participants encouraged all Afghan parties, including the Taliban, to continue dialogue. An “inclusive and broad-based political structure with the participation of all ethno-political groups is the only solution to Afghanistan issues,” they said.

Nuclear: Iran’s lead negotiator announced a return to nuclear talks with the world’s six major powers by end of November. Ali Bagheri, the new deputy foreign minister, tweeted the announcement after meeting in Brussels with Enrique Mora, the E.U. coordinator for the talks.

Human Rights: Iran permitted Baquer Namazi, a detained 84-year-old Iranian-American, to receive life-saving surgery to remove an artery blockage in his brain. Namazi’s attorney Jared Genser said that the operation appeared to be successful, but he urged Iran to allow his client to leave the country. He cited “dire concerns remain about the quality of aftercare available in Iran, the significant risk of Covid-19 exposure in the hospital, and the need for a stress-free environment for recovery.” Iran detained the former U.N. Children’s Fund representative in 2016, when he was visiting his imprisoned son Siamak.