Khamenei on U.S. and Foreign Intervention 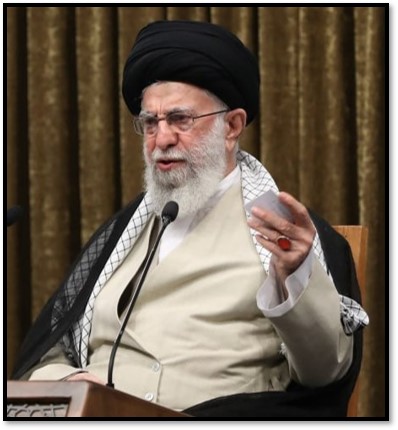 In a wide-ranging speech, Supreme Leader Ayatollah Ali Khamenei condemned the United States for interfering in its neighboring regions, notably Afghanistan. The Americans “stayed in that country for 20 years killing people, committing crimes, occupying, promoting addictive drugs, and destroying the limited infrastructure of Afghanistan,” he told graduates of the Imam Hussain Military Academy on October 3. “The Hollywood pictures that the U.S. and countries like the U.S. produce about their armies are untrue.”

Khamenei also warned governments worldwide against depending on outsiders to ensure their national security. “You have witnessed in the recent tensions between the Europeans and the United States, in which the Europeans have declared that the Americans have stabbed them in the back,” he said, referring to the diplomatic crisis between the United States and France over AUKUS, a new security pact between Australia, Britain and the United States. “The main point is that the Europeans need to ensure their security themselves with their own forces and regardless of NATO, whose main sponsor is the U.S.” The following is an excerpt from his speech.

Our Armed Forces take pride in that they are a strong fortress in our dear country. They are a solid castle for the country and the nation. As the Commander of the Faithful [Imam Ali (pbuh)] said, “The army is, by the will of God, the fortress of its people.” [Nahjul Balaghah, Letter 53] This has been realized in the country in the true sense of the word. Today, the organizations in our Armed Forces–including the Army, the Guard Corps, the Police Force and the Basij [paramilitary]–are a defensive shield in the true sense of the word against the harsh threats posed by the enemies inside and outside the country.

Being a soldier for such a nation is a source of pride. You who are wearing a military uniform–of each and every military organization–feel proud of having prepared yourselves for defending the Iranian nation and for defending the Islamic, national, revolutionary identity of the country and ensuring the security of Iran.

Security is the most important issue to consider when looking at the Armed Forces. The security of a country is the fundamental infrastructure for all activities for progress. The infrastructure for all economic, scientific and political activities and all activities related to health and to public services is security. If security is absent in a country, then all these important, essential activities will be seriously disrupted. Therefore, the Armed Forces take pride in that they possess this infrastructure which has been achieved with their determination, willpower and their very lives. You should pay attention to this point. Every step you take is toward this great goal, and this is something that pleases God and the Friends of God.

You have witnessed in the recent tensions between the Europeans and the United States, in which the Europeans have declared that the Americans have stabbed them in the back, the main point is that the Europeans need to ensure their security themselves with their own forces and regardless of NATO whose main sponsor is the U.S. In other words, when the security of developed European countries is in the hands of or dependent on another country’s military force— even though that other force is not an open enemy of that country and even though they are part of the same group in appearances–they feel they have a serious shortcoming. And this is the truth of the matter. They do have a shortcoming.

The less developed countries whose armies are completely under the control of the U.S. Army and the like are in an even worse situation. If a country can ensure its security with its own skilled, trained forces, this is a great honor. Those who think that their security will be ensured by relying on other countries should know that they will soon pay a hefty price [for entrusting their security to foreigners].

One of the most catastrophic disasters for countries occurs when other countries interfere in their matters of security, plan their war and peace, and define their policies. It is a grave disaster for every country that is in such a situation. As I have mentioned, even European countries that breathe under NATO’s umbrella wish to move independently today.

What does it mean when we speak of the authority of our Armed Forces? This is an important point. Obviously, the authority of the Armed Forces depends on their training, resourcefulness, various scientific advancements, equipment and organizational discipline. These matters themselves are essential and the Armed Forces definitely need them, just like and even more than other organizations. However, there is another very important element, and that is having good spirits and spirituality while being healthy in beliefs and morals. This is a very important matter that plays an extraordinary role in the authority of the Armed Forces. If this factor is missing in an army, even if they possess ample weapons and ammunitions, that army cannot claim to be an army with authority.

As you witnessed, the U.S. army, equipped with all kinds of weapons–conventional and unconventional— entered our neighboring country, Afghanistan, to overthrow the Taliban government. They stayed in that country for 20 years killing people, committing crimes, occupying, promoting addictive drugs and destroying the limited infrastructure of Afghanistan. Then after 20 years, they handed over the government to the Taliban and left. They had come to remove the Taliban from power and they stayed in that country in that situation based on that claim for 20 years. They committed all these crimes, inflicted all this suffering and incurred this huge material and human loss. But in the end, they handed over the government to the Taliban and returned to their own country. This means that a fundamental, vital element was missing in their army, namely the spiritual, moral element. This means paying attention to God, the Exalted, and to spirituality. This is a lesson for all countries.

Moreover, we should pay attention to this fact that this is the nature of the U.S. army. The Hollywood pictures that the U.S. and countries like the U.S. produce about their armies are untrue. The reality of their army is what you have seen in recent days. They went to Afghanistan making extravagant claims and then left in such a disastrous way. The same is more or less true about their presence in other countries too. In other countries where the U.S. army is present, even if the rulers in those countries have not had the courage to throw them out, the Americans are hated by those nations. In every country where they are present–for example, in East Asian countries where the U.S. army has been present for many years–they are hated by the people in those countries.

Well, we should pay attention to this that the presence of foreign armies, including the U.S. army, in our own region is a source of destruction and war. Everyone should try to keep countries and their armies independent by relying on their own nations and cooperating with the armies of their neighboring countries and other armies in the region. This is in the best interest of the region. We and they should not allow foreign armies to travel thousands of miles–under the pretext of safeguarding their national interests while these issues have nothing to do with their nations–and to interfere in the affairs of our countries and our armies and to maintain a military presence here. The armies of regional nations can run the region on their own and you should not allow others to enter.

The events that are taking place in the northwest of our country in some of our neighboring countries are matters that must be resolved using this same logic. Of course, our country and our Armed Forces are acting wisely. Our approach in all matters is to act wisely, authority coupled with wisdom. It is good if other governments act wisely too and not permit the region to face serious problems. “Those who dig a hole for their brothers will be the first to fall into it.” [Speaking in Arabic]

I hope that God, the Exalted, will bestow success on all of you dear ones every day, on the honorable commanders of the Armed Forces and the commanders of various ranks, and finally on you, the dear youth who have a large, effective presence in the Armed Forces so that you can continue to have the honor to serve this country, to serve this system (the Islamic Republic), to serve the Revolution and to serve our pious, faithful people, and so that you can increase your preparedness on a daily basis.

Fortunately, the academies of our Armed Forces are progressive academies. Of course, not all of them are at the same level. Some of them move faster, more successfully and more efficiently and some have to try and make more promising moves. The reports I have from the academies are satisfactory in general. As I mentioned in the beginning of my speech, the Iranian nation should be congratulated for having you pious, determined and brave youth. God willing, God will protect all of you and raise our dear martyrs with the Friends of God and the Holy Prophet.

Greetings be upon you and God’s mercy and blessings.