By the Wisconsin Project on Nuclear Arms Control

This article is based on an Iran Watch report by the Wisconsin Project. The full report can be found here. 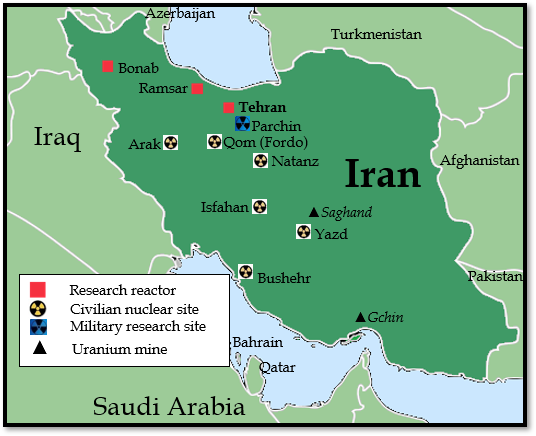 Iran began its centrifuge effort in the late 1980s with know-how obtained from the notorious proliferation network led by the late Pakistani metallurgist A.Q. Khan. Khan stole centrifuge designs from Urenco, a British-German-Dutch company, for Pakistan in the 1970s. Khan later covertly transferred centrifuge designs and components to several countries, including Iran. Iran used these transfers to design and manufacture its own centrifuges.

Iran has installed centrifuges at enrichment facilities at Natanz, which is in Isfahan Province, and Fordow, an underground facility outside the city of Qom, as part of its nuclear program. They include:

Iran also has a centrifuge production plant at Karaj, on the outskirts of Tehran.

The 2015 nuclear deal, known as the Joint Comprehensive Plan of Action (JCPOA), limited Iran to using only the IR-1, its most basic centrifuge, to produce enriched uranium. Iran began breaching its obligations under the JCPOA in mid-2019, a year after President Trump withdrew the United States from the accord and reimposed sweeping sanctions. In late 2020, Iran began using more efficient IR-2m and IR-4 centrifuges to enrich uranium at both facilities at Natanz. In early 2021, it began installing advanced IR-6 centrifuges at Fordow. In April 2021, Iran began using IR-4 and IR-6 centrifuges at PFEP to produce uranium enriched to 60 percent—which is close to the level required to fuel a weapon.

Iran’s so-called “breakout time”—or how long it takes to produce enough fuel for nuclear weapons at known facilities—is determined in part by the number and power of its centrifuges. The breakout time can be shortened with more powerful centrifuges.

Iran's ability to accomplish a “sneakout”—or the production of enough fuel for nuclear weapons at secret sites—is also determined in part by the power of its centrifuges. The more powerful the centrifuges, the fewer are required to produce the same quantity of fuel. These sites may be smaller and, therefore, easier to conceal.

Iran has insisted that it does not seek a nuclear weapon, and obtaining one would breach its obligations as a signatory of the Nuclear Nonproliferation Treaty (NPT). But Iran’s progress in centrifuge development and operation also has implications for nuclear diplomacy. Centrifuge production can be halted, and uranium stockpiles can be diminished, but knowledge is irreversible—and transferrable. Each technological step forward marks a permanent advance in Iran’s nuclear capabilities. 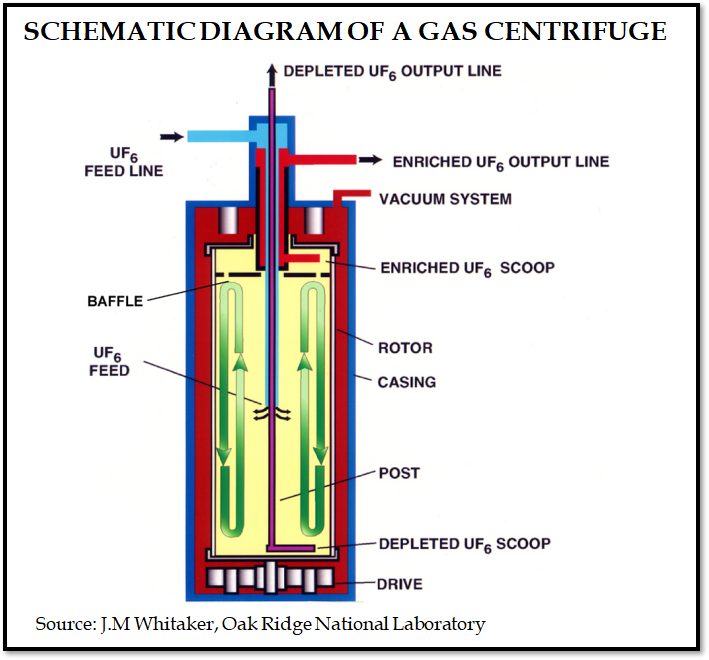 The power of each centrifuge is based on the efficiency with which it separates the different isotopes in uranium. In nature, most uranium is heavier U-238. A centrifuge separates out U-238 to increase the concentration of the much less abundant U-235, which is lighter and suitable for fission—or splitting the nucleus of an atom into two. The resulting product—enriched uranium—is used as nuclear fuel. Uranium enriched to 3 percent to 5 percent concentration of U-235 is suitable for nuclear reactors. Weapons-grade uranium is usually defined as 90 percent U-235.

The output of a centrifuge is measured in “separative work units” (SWU) per year. SWU reflect the effort needed to separate the two uranium isotopes in the enrichment process. A centrifuge with a higher SWU per year can enrich greater quantities of uranium to higher levels in shorter periods of time than a less efficient centrifuge.

The rotor of a centrifuge is what spins the uranium hexafluoride (UF6) gas to separate uranium isotopes. Centrifuges use “bellows” between rotors to form a rotor assembly that allows for flexibility when spinning at higher speeds. The bellows and the rotors themselves must be made with strong, lightweight material. Carbon fiber is an ideal material for this purpose, but aluminum and specialty steels such as maraging steel can also be used.

As of late 2021, Iran’s centrifuges could be divided into four generations.

The workhorse: the IR-1

The IR-1, based on a design provided by Khan, is the most widely deployed centrifuge in Iran’s facilities. Research and design on the IR-1 began in earnest in the late 1990s, when Iran first successfully tested a centrifuge and made a decision to scale up its program. The output of a single IR-1 in a cascade is estimated to be about 0.8 SWU per year, which is low compared to Iran’s more advanced models.

As of August 2021, Iran was operating approximately 6,000 IR-1 centrifuges, with thousands more in storage. The rotors of the IR-1 are made from aluminum. Its bellows are made from maraging steel.

Second-generation: the IR-2m and IR-4

Iran experimented with a second generation of centrifuges based on drawings and components of Pakistan’s P-2 provided by Khan. Iran subsequently modified those designs to develop the IR-2m and the IR-4. The rotor assembly of the IR-2m is made of carbon fiber and maraging steel; the IR-4’s rotor assembly is made entirely from carbon fiber. The output of both the IR-2m and the IR-4 is estimated to be roughly 4 SWU to 5 SWU per year—or four to five times greater than an IR-1.

Iran has been testing the IR-2m and IR-4 since 2009. It began installing IR-2m centrifuges at the FEP at Natanz by February 2013. Until 2019, Iran did not use either type of centrifuge to stockpile enriched uranium—in accordance with the JCPOA—but it did continue research and development with them.

Iran reportedly first produced the IR-6 in 2009. In February 2013, the International Atomic Energy Agency (IAEA) confirmed that Iran was using IR-6 and IR-6s (a variant) centrifuges at the PFEP at Natanz. In 2020, Iran began testing larger cascades of the IR-6. Its rotor assembly is likely made of carbon fiber. Iran claims that the output of the IR-6 is 10 SWU per year, approximately double the claimed output of the IR-2m and IR-4.

In 2021, Iran began using a cascade of IR-6 centrifuges to produce uranium enriched up to 60 percent at the PFEP at Natanz. For the first time, it also began installing two cascades of IR-6 machines at Fordow. The plan is to feed uranium enriched up to 5 percent back into IR-1 machines to be further enriched to 20 percent. Iran also announced plans to install a single cascade of 174 IR-6 centrifuges at the FEP at Natanz, but it had not begun as of August 2021.

Fourth generation: the IR-8 and IR-9 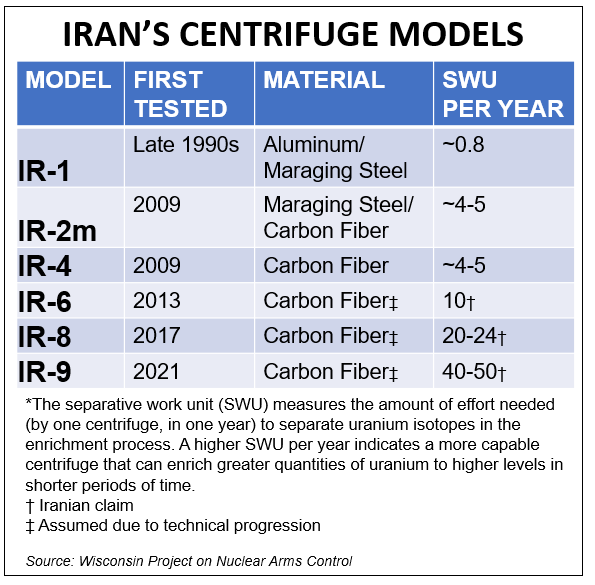 In December 2013, Tehran informed the IAEA of its intention to install the IR-8. It soon installed an empty casing for it at the PFEP at Natanz, possibly to include the IR-8 under the Joint Plan of Action, the precursor to the JCPOA. The IR-8’s rotor assembly is probably made of carbon fiber. Iran claims that the output of the IR-8 is between 20 SWU and 24 SWU per year, twice that of the IR-6.

Iran began testing the IR-8 at the PFEP at Natanz in January 2017. In 2019, Iran tested two other variants, the IR-8s and IR-8B, shortly after declaring them to the IAEA.

Iran has also tested an IR-9, which may represent a fifth generation of centrifuges. In November 2019, Iranian journalists visiting Natanz were shown the IR-9, which reportedly has an output of 40 to 50 SWU per year, double that of the IR-8. By February 2021, one IR-9 centrifuge was being tested at Natanz.

Developing centrifuges with higher SWU per year is challenging. Machines that are taller and spin faster have better output, but they must be exactingly designed so as not to tear themselves apart at high rotational speeds. Each generational category used by Iranian officials to classify centrifuges thus does not necessarily represent a substantial improvement in quality and reliability, but the classifications have made sense technologically. Tehran called the IR-2m a second-generation centrifuge because it has a simplified design and uses different materials than the IR-1. Iran dubbed the IR-6 a third-generation centrifuge because it has a wider rotor and other innovations. Iran called the IR-8 a fourth-generation machine because it is taller and wider than any previous centrifuge. The IR-9, which is taller still, may be a fifth generation.

Iran has claimed that each new generation of centrifuges was twice as powerful as its predecessor. But Iran’s advanced centrifuges have not been used long enough for their output to be reliably assessed. Iran initially claimed that the IR-1’s output was 2 SWU to 3 SWU per year. Its actual output, 0.8 SWU per year, fell short.

Iran needs to produce advanced centrifuges in greater quantities to increase its capacity to enrich uranium. The materials necessary to operate a centrifuge cascade fall broadly into three categories:

Once dependent on imports, Tehran was less reliant by the time nuclear diplomacy resumed in 2021, although items produced domestically may be of lower quality. Iran has shown that it can produce larger numbers of the IR-2m and IR-4; it had more than 1,000 IR-2m machines installed as of August 2021. It has also begun to deploy hundreds of IR-6 centrifuges. Iran may well have the capacity to continue the development, manufacture and use of advanced centrifuges in quantity, in defiance of limits sought by the international community.

Implications for Weapons Production and Diplomacy

The increased risk of a “sneakout” is perhaps the biggest implication of Iran’s growing mastery of centrifuge design and manufacturing. Iran could produce enough weapon-grade uranium for a single weapon in as little as four months, or enough for five weapons in 20 months, if it uses IR-2m centrifuges in one site only twice as large as the ice surface of a professional hockey rink. Using IR-6 centrifuges in the same small site, Iran could produce enough fuel for a single weapon in two months and for five weapons in as few as 10 months. In both cases, these estimates assume that Iran would be starting a clandestine process from scratch with natural uranium—rather than uranium already partially enriched.

Iran does not yet appear to have produced enough IR-2m or IR-6 centrifuges to operate such clandestine sites. The IAEA, however, has been unable to monitor Iran’s production of centrifuges since February 2021, when Iran suspended inspections of its Karaj centrifuge production plant. Iran subsequently removed IAEA cameras from the Karaj site after an alleged sabotage attack in June. Tehran has since refused to replace the cameras or allow IAEA personnel to access the site. As a result, the IAEA would find it more difficult to detect the production of more advanced centrifuges or the diversion of centrifuge parts from the Karaj plant to secret sites.

Another implication is for nuclear diplomacy. Iran’s recent technological advances in centrifuge development cannot be reversed by a return to the JCPOA or as part of a new agreement. Iran’s negotiating partners therefore need to consider the fact that some increases in the country’s nuclear capability will be permanent. These locked-in gains will continue to accumulate as long as Iran continues to manufacture, test, and operate new centrifuges.