On November 7, three quadcopter drones were launched at the home of Iraqi Prime Minister Mustafa al Kadhimi inside the well-guarded Green Zone in Baghdad. Kadhimi was unharmed, but six guards were reportedly wounded. “Cowardly rocket and drone attacks don’t build homelands and don’t build a future,” Kadhimi said in a televised address. His office blamed unspecified “criminal armed groups” for the assassination attempt.

General Kenneth McKenzie Jr., the head of U.S. Central Command, blamed Iran-backed militias for the attack. “What we have seen are groups linked to Iran that see that they cannot legally cling to power, and now they are resorting to violence to achieve their goals, and this is not good,” he told Alhurra TV on November 8. 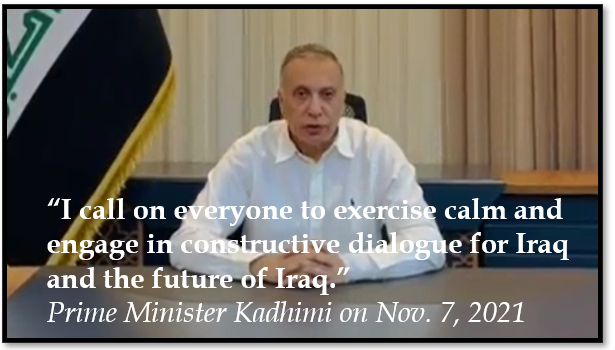 No party claimed responsibility, but the attack was initially linked to Kataib Hezbollah and Asaib Ahl al Haq (AAH), Shiite militias supported by Iran. The assassination attempt followed two days of protests by Shiite militias and political parties after they lost some two-thirds of their seats in parliamentary elections on October 10.

Under the umbrella of the Fatah (Conquest) Coalition, the political wings of AAH and other Iran-backed groups won only 17 seats in 2021, down from 48 seats in 2018, when the coalition became the second largest bloc in parliament. The Huqooq (Rights) Movement, a new party affiliated with Kataib Hezbollah, secured only one seat in 2021.

Shiite cleric Muqtada al Sadr, who has had an erratic relationship with Iran and its Iraqi allies, was the clear winner. His bloc won 73 seats. 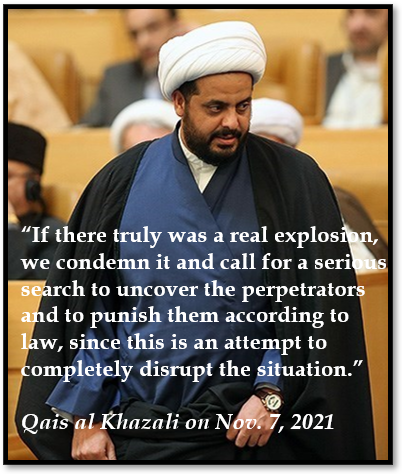 Kataib Hezbollah and AAH denied involvement. “If there is anyone who wants to harm this Facebook creature, there are many ways that are less costly and more guaranteed to achieve that,” Kataib Hezbollah leader Abu Ali al Askari wrote on Telegram.

AAH leader Qais al Khazali questioned the government's account. “If there truly was a real explosion, we condemn it and call for a serious search to uncover the perpetrators and to punish them according to law, since this is an attempt to completely disrupt the situation,” Khazali said. “This is because it took place just one day after the clear crime of killing the protestors.”

Some Shiite militias condemned the attack. Hadi al Amiri, a member of parliament and the leader of the Fatah Coalition that includes AAH, alleged that an unspecified third party was engaging in “sedition.”

Hours after the attack, Brigadier General Esmail Ghaani, the leader of Iran’s elite Qods Force that patronizes several Shiite militias in Iraq, arrived in Baghdad for talks with Kadhimi, President Barham Salih and other officials. “Iran has nothing to do with this attack,” Ghaani said, according to Iraqi politicians. He also reportedly met with leaders of Iran-backed militias and urged self-restraint.

Without offering evidence, Iran implicated the United States. Iraqis should be vigilant against “conspiracies targeting Iraq’s security and development,” Foreign Ministry Spokesperson Saeed Khatibzadeh warned on November 7. “Such incidents are in line with the interests of parties that have violated the stability, security, independence, and territorial integrity of Iraq over the past 18 years, and through creation of terrorist and seditionist groups, seek to achieve their sinister objectives in the region.” Iran had previously blamed the United States, also without any evidence, for the creation of ISIS and destabilizing Iraq.

The drone attack “must be traced back to foreign think tanks, which have brought nothing but insecurity, discord & instability to oppressed Iraqi people through creation & support of terrorist groups & occupation of this country for years,” Ali Shamkhani, the secretary of the Supreme National Security Council, tweeted.

The international community denounced the perpetrators. President Joe Biden said that those responsible for the “terrorist attack” must be held accountable. “I condemn in the strongest terms those using violence to undermine Iraq’s democratic process,” he said on November 7. Biden also offered assistance to Iraqi security forces investigating the incident. Secretary of State Antony Blinken reiterated the same points in a call with Kadhimi.

On November 7, U.N. Secretary General Antonio Guterres urged “all political actors to uphold the constitutional order and resolve differences through peaceful and inclusive dialogue.” He added that violence and unlawful acts “must not be allowed to undermine Iraq’s stability and derail its democratic process.” In a statement on November 8, the U.N. Security Council “underlined the need to hold perpetrators, organisers, financiers and sponsors of these reprehensible acts of terrorism accountable and bring them to justice.”

The political and security situation in Iraq has been tenuous since the preliminary results of the October 10 parliamentary elections were announced. Both the Fatah Coalition and the Huqooq Movement, Shiite parties, rejected the election outcome that marginalized them. “We will not accept these fabricated results whatever the cost, and we will defend the votes of our candidates and voters with full force,” declared Amiri, the leader of the Fatah Coalition. The Huqooq Movement and AAH demanded a manual recount of the ballots. The following is a timeline of the events leading up to the drone attack.

Supporters of the Popular Mobilization Forces (PMF) gathered in Baghdad's Badr Street near the Iraqi presidential palace to protest against Iraq's electoral commission after they lost a dramatic number of their seats in the latest election.

October 19: Hundreds of supporters of the Popular Mobilization Forces (PMF)—which includes Kataib Hezbollah, AAH and several other militias backed by Iran—began a sit-in near the Green Zone to protest the October 10 election results. “No to fraud, no to America,” they chanted. The demonstrators, who set up tents and erected banners, demanded a recount of ballots cast in the election.

October 30: Militants launched three Katyusha rockets towards the heavily fortified Green Zone in Baghdad late at night. But they landed in the nearby residential areas of Mansour and Al Harithiyah. No group claimed responsibility for the strike, which was the first rocket attack to target the Green Zone since July 29, 2021. Sabreen News, a Telegram channel linked to the Iran-backed militias, first reported on the attack. Social media channels linked to the militias said that the intended target was the U.S. Embassy. But Shafaq News reported that the actual target was the National Intelligence Service headquarters and that Kadhimi was in the building at the time of the attack.

November 4: AAH leader Qais al Khazali told al Ahd TV that “the participants of the sit-in cannot return to their homes as losers.” Abdulamir al Teiban, a lawmaker from al Sadiqoon, AAH’s political wing, accused the United States and the United Arab Emirates of orchestrating elections and urged Iraqi politicians who were not reelected to challenge the results. “If you swallow the bait and turn a blind eye to this farce in exchange for fleeting benefits, your fate will be like the end of Muammar Gadhafi, whose head was torn off by uncontrolled gangs under French supervision,” al Teiban tweeted.

November 5: Hundreds of PMF supporters marched on the Green Zone and clashed with security forces. Protestors threw stones at police, who fired their weapons into the air and eventually pushed the crowd back. At least 125 people were injured, Iraq’s heal ministry reported. AAH said that three people were killed. At least one protestor reportedly died at a hospital.

Khazali, the AAH leader, held Kadhimi responsible for the death and injury of protestors. “Avenging the blood of the martyrs is our responsibility, and we will do this by putting you on trial,” Khazali told supporters after arriving at the scene late at night.

November 6: PMF supporters continued the protest outside of the Green Zone. Many shouted “No to America!,” “No to Fraud!” They carried posters depicting Kadhimi as a criminal chained and behind bars. The rally was attended by AAH’s Khazali and other senior leaders from Iran-backed militias, including Kataib Hezbollah, Kataib Sayyid al Shuhada (KSS), the Badr Organization, and Kataib Imam Ali.

November 7: Three quadcopter drones carrying explosives were launched at Iraqi Prime Minister Kadhimi’s residence in the highly fortified Green Zone. Iraqi forces downed two, but one crashed into the house, wounding several guards. Kadhimi was unharmed, although he wore a bandage on his wrist when he appeared on television to call for calm.

For years, a wide variety of actors – including ISIS, Shiite militias, tribes, and drug smugglers – have used drones for reconnaissance, combat or moving goods. U.S.-led coalition forces have been attacked by armed drones for years. The growing threat from small and inexpensive drones is “the most concerning tactical development since the rise of the improvised explosive device in Iraq,” General McKenzie warned in February 2021. “I’m not just talking about large unmanned platforms, which are the size of a conventional fighter jet that we can see and deal with by normal air defense means. I’m talking about ones you can go out and buy at Costco right now for $1,000.”

The drones and explosives used in the attack on Kadhimi were Iranian made, Iraqi security officials and sources close to Iran-backed militias told Reuters. At least four Iraqi militias – the Badr Organization, Kataib Hezbollah, Kataib Jund al Imam and Harakat Hezbollah al Nujaba – have demonstrated drone capabilities. The PMF, “with the help of (Iranian) advisers, now knows how to operate and manufacture drones,” a Badr official told Reuters in 2015.

The kind of quadcopter drones used in the November 7 attack have been sighted at least four other times since July 2020, according to The Washington Institute for Near East Policy and Fenix Insight.

Kadhimi became prime minister in May 2020 after serving as Iraq’s intelligence chief for four years. Early on, Kadhimi demonstrated willingness to rein in armed groups that are not accountable to Baghdad. In June 2020, he ordered a raid on Kataib Hezbollah, which had attacked U.S. forces and was allegedly planning a rocket attack on the Green Zone and Baghdad International Airport, both locations where U.S. troops were present. For years, Kataib Hezbollah and other militias have targeted U.S. bases, supply convoys and diplomatic facilities.

In July 2020, Hisham al Hashimi, a counterterrorism advisor to Kadhimi who had researched the militias, was assassinated. The prime minister blamed Hashimi’s killing on groups operating “outside the law” – an apparent reference to the militias. Kataib Hezbollah, which had threatened to kill Hashimi, was linked to the murder. “Any weapons outside government control will not be tolerated,” Kadhimi told journalists during a trip to Washington on August 20, 2020.

Kadhimi has repeatedly emphasized that Iraq wants to defuse escalating tensions between Washington and Tehran. “We were very direct toward both parties that we do not accept Iraq to become a battleground,” he told American reporters on July 26, 2021 after meeting with President Biden. “And we work to achieve calm despite that. There were some violations by some outlaw groups—towards which we took measures. We fought and conducted arrests against some of these groups.”

The relationship between Kadhimi and Iran-backed groups further soured after the 2021 parliamentary elections. They performed poorly and disputed the results, holding Kadhimi responsible for alleged fraud. “The farce of the elections organized under a legal name was the biggest theft and ploy committed against the Iraqi people,” Kataib Hezbollah leader Askari said in a statement on October 17. “Al Kadhimi must be tried for committing fraud and cooperating with our enemies.”

After the November drone attack, Iraq’s Minister Council for National Security warned that the perpetrators would not escape punishment. “Whoever thinks that the hand of our forces cannot reach him is delusional,” the council said in a written statement. “No one is above the law.”