Esfandyar Batmanghelidj is the founder and chief executive of the Bourse & Bazaar Foundation, a think tank focused on economic diplomacy and development in the Middle East and Central Asia.

Iran reportedly has more than $100 billion in frozen assets held in banks abroad. Why are the assets an issue? Why were they frozen to begin with?

The United States has long used sanctions to impede Iran’s access to its foreign exchange reserves. These reserves, which are assets held in foreign currencies by the Central Bank of Iran, are important for the normal operation of Iran’s economy. The reserves are used, among other things, to help manage the exchange rate. And the availability of the foreign currency reserves is directly tied to the supply of foreign currencies available to Iranian companies, which need to sell rials and buy euros, yen or other currencies to purchase goods and services from foreign suppliers. 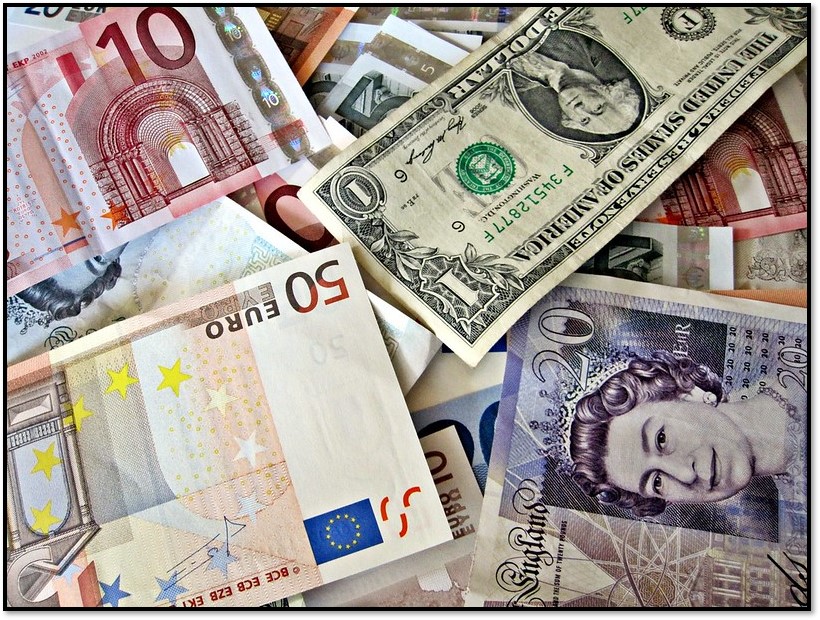 Foreign currency reserves are also important for managing crises when Iran’s balance of payments falls into a serious deficit, as it did during the early days of the COVID-19 pandemic. While Iran has limited external debt, the size of its foreign reserves also gives confidence to the Iranian market that the government can meet its financial obligations or cover the obligations of other institutions that might default.

The Obama administration (2009-2017) used sanctions to pressure Iran to curtail its nuclear program and come to the negotiating table. Through a series of regulations and designations, Washington made clear that foreign companies and financial institutions that provided “material support” to the Iranian financial system – even by simply processing Iran-related transactions – could find themselves similarly designated and therefore cut off from the U.S. financial system.

Foreign banks that hold Iranian foreign exchange reserves responded to these so-called secondary sanctions by freezing Iran’s access to their reserves. Iranian requests to make transfers or payments have often been refused, even when transactions are technically permissible under exemptions intended to protect humanitarian trade.

Limiting Iran’s access to the reserves weakened the rial, made the economy more vulnerable to a balance of payments crisis, and made it harder for the Iranian government and Iranian companies to do business abroad.

In 2014, Iran gained access to a small portion of its reserves after it reached an interim nuclear deal the world’s six major powers – Britain, China, France, Germany, Russia, and the United States. Iran was allowed to repatriate $4.2 billion in oil revenues held abroad.

In 2015, the same countries reached a final agreement, known as the Joint Comprehensive Plan of Action (JCPOA), in which Iran agreed to significantly curb its nuclear program in exchange for sanctions relief. As a result, Tehran regained access to more than $100 billion in assets abroad.

What countries hold Iran’s assets? What were they purchasing from Iran? 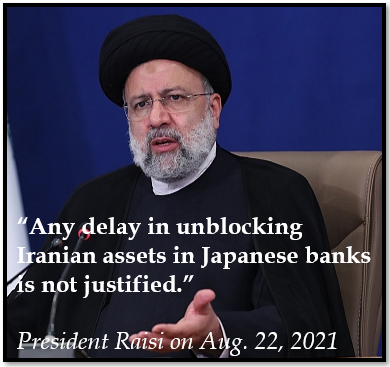 Iran’s total foreign exchange reserves amounted to $115.4 billion at the end of the 2020 financial year, which ended on April 30, according to the International Monetary Fund (IMF). But as of October 2021, only $12.2 billion was “readily available and controlled by the monetary authorities after the re-introduction of financial sanctions,” according to a new IMF estimate.

Most of Iran’s foreign exchange reserves have accrued in countries buying crude oil from Iran. Determining where exactly Iran maintains the reserves is difficult: the government treats information regarding the location and value of these reserves as a matter of national security.

Media reports, however, suggest that significant reserves are held in South Korea and Japan (historically major customers of Iranian oil) and Iraq (a country that buys electricity from Iran). Iran’s central bank also maintains accounts in several other countries, including China, Germany, India, Turkey, and the United Arab Emirates. Since the reimposition of U.S. secondary sanctions in 2018, Iranian economic diplomacy has focused in large part on bilateral negotiations with these countries to seek the release of funds.

Iran’s inability to access the reserves is more a function of the hesitance of financial institutions to process any Iran-related transactions – including humanitarian trade – without a greenlight from the U.S. government. (Under U.S. law, humanitarian goods are not subject to sanctions, but some foreign companies and banks have been reluctant to do business with Iran for fear of running afoul of U.S. sanctions.) Faced with this predicament, Iran has pressured the South Korean, Japanese, and Iraqi governments to seek approvals from the United States.

What impact would the release of the frozen assets have on Iran’s economy?

For years, critics of the JCPOA have warned that unfreezing some or all of Iran’s foreign exchange reserves could be a windfall for the government. A key concern is that Tehran could use the billions of dollars to fund militant proxies and other malign activities.

But historically, Iran has not drawn down large sums from its reserves. Part of the reason why Iran has accrued significant foreign exchange reserves is that, like most countries, it is happy to let its reserves grow. In 2002, Iran had around $21 billion of foreign exchange reserves. By 2015, total reserves had risen to $128 billion. In 2016, Iran regained access to its assets abroad as part of the JCPOA. By 2017, reserves had only fallen to $112 billion.

Even if the outflow of funds from the reserves were limited, the economic impacts of unfreezing could be significant. The accessibility of reserves serves to stabilize the value of the rial and restore a degree of economic resilience in the face of crises.

For example, had Iran had access to its reserves during the COVID-19 pandemic, it would have been better able to weather the economic impacts. Easier access to reserves would have helped Iran pay for imported medicine and medical equipment, especially Personal Protective Equipment (PPE) and devices such as ventilators that were in short supply in the first phase of the pandemic. Payment challenges put Iran at the back of the line for these goods, despite it being one of the first countries hit by the pandemic.

In March 2020, Iran applied for an emergency financing package from the IMF worth $5 billion. Because it’s reserves were not readily accessible, Iran technically qualified for such a loan, drawn from a pool of financing earmarked for economies facing balance of payments crises. In the end, the loan did not come through, both because of political opposition by the United States but also because of the technical challenges posed by U.S. secondary sanctions.

Why does Iran want the funds so badly? Is it mainly interested in accessing foreign exchange for purchasing goods from abroad?

Tehran maintains that it needs the reserves at least in part for humanitarian reasons, to pay for COVID-19 vaccines and medical supplies, and to pay dues to the United Nations. 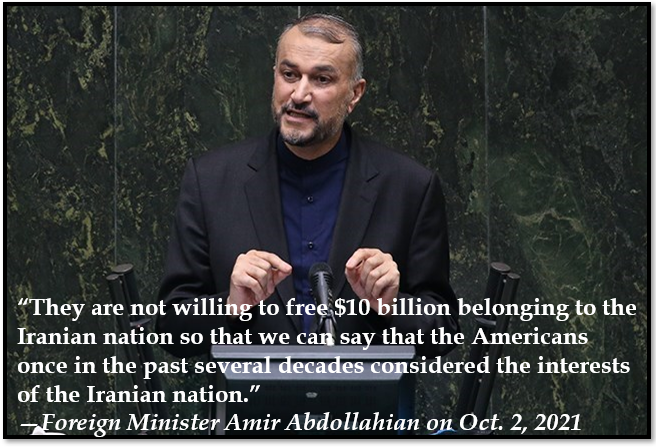 Iran has also called on the Biden administration to unfreeze some of its reserves as a goodwill gesture. In September 2021, Foreign Minister Hossein Amir-Abdollahian urged the United States to release at least $10 billion before resuming talks on restoring the JCPOA.

“The Americans tried to contact us through different channels in New York (at the U.N. General Assembly), and I told the mediators if America's intentions are serious then a serious indication was needed,” Amir-Abdollahian later explained in a televised interview.

The United States, however, refused to offer concessions to bring Iran back to the negotiating table. From April to June 2021, Iran and the world’s six major powers held six rounds of talks. Diplomacy stalled in June during Iran’s presidential campaign and the political transition as Ebrahim Raisi took office and appointed his cabinet in August. On October 27, Iran’s new lead negotiator announced that nuclear talks would resume by the end of November.

Notably, Iran has complained that the United States is obstructing the release of around $7 billion of reserves reportedly held at two South Korean banks, the Industrial Bank of Korea and Woori Bank. In October 2021, Foreign Minister Amir-Abdollahian warned that Iran’s central bank could sue the South Korean banks if they didn’t release the funds. “U.S. pressure (on Seoul) is a fact, but we cannot continue... to turn a blind eye to this question,” he said.

Beyond the need for humanitarian aid, Iran is seeking access to the funds for two main reasons. First, at a political level, unfreezing the reserves is perhaps the clearest way that Iranian officials can indicate to domestic audiences that sanctions relief has been implemented. Just as critics of the JCPOA view the release of billions of dollars of reserves as a threat, Iranian officials point to those large numbers as a boon.

Second, Iran cannot operate normally in the global economy without the ability to use its foreign exchange reserves and to make transfers between currencies. For example, Iran runs trade surpluses with some countries and deficits with others. Effective reserve management requires converting reserves earned in countries where Iran runs a surplus, into the currency of those countries in which it is necessary to make up for a deficit.

Photo Credits: Money from around the world by www.taxrebate.org.uk via Flickr (CC BY 2.0); Ali Salehabadi by Marzieh Noorali via IRNA: Amir-Abdollahian by MohammadHosein MovahediNejad for Tasnim News Agency (CC BY 4.0)