Iran’s presidential election triggered backlash from across the political spectrum after the Guardian Council approved only seven men out of 592 candidates to run for president. Highly anticipated candidates were barred from running. They included Ali Larijani, speaker of parliament from 2008 to 2020, and Eshaq Jahangiri, who has served as vice president since 2013. The list faced challenges from Sadegh Larijani, a member of the Guardian Council and the brother of Ali Larijani. The hardliner blasted the disqualifications as “indefensible.” Even Ebrahim Raisi, the judicial chief and presumptive frontrunner, also criticized the field as too narrow. The list was also criticized by two high-profile descendants of Ayatollah Ruhollah Khomeini, who led the 1979 revolution and was the supreme leader for the first decade after the monarchy. In separate statements, Khomeini’s daughter and grandson warned that the Guardian Council was weakening the republican aspect of Iran’s political system. 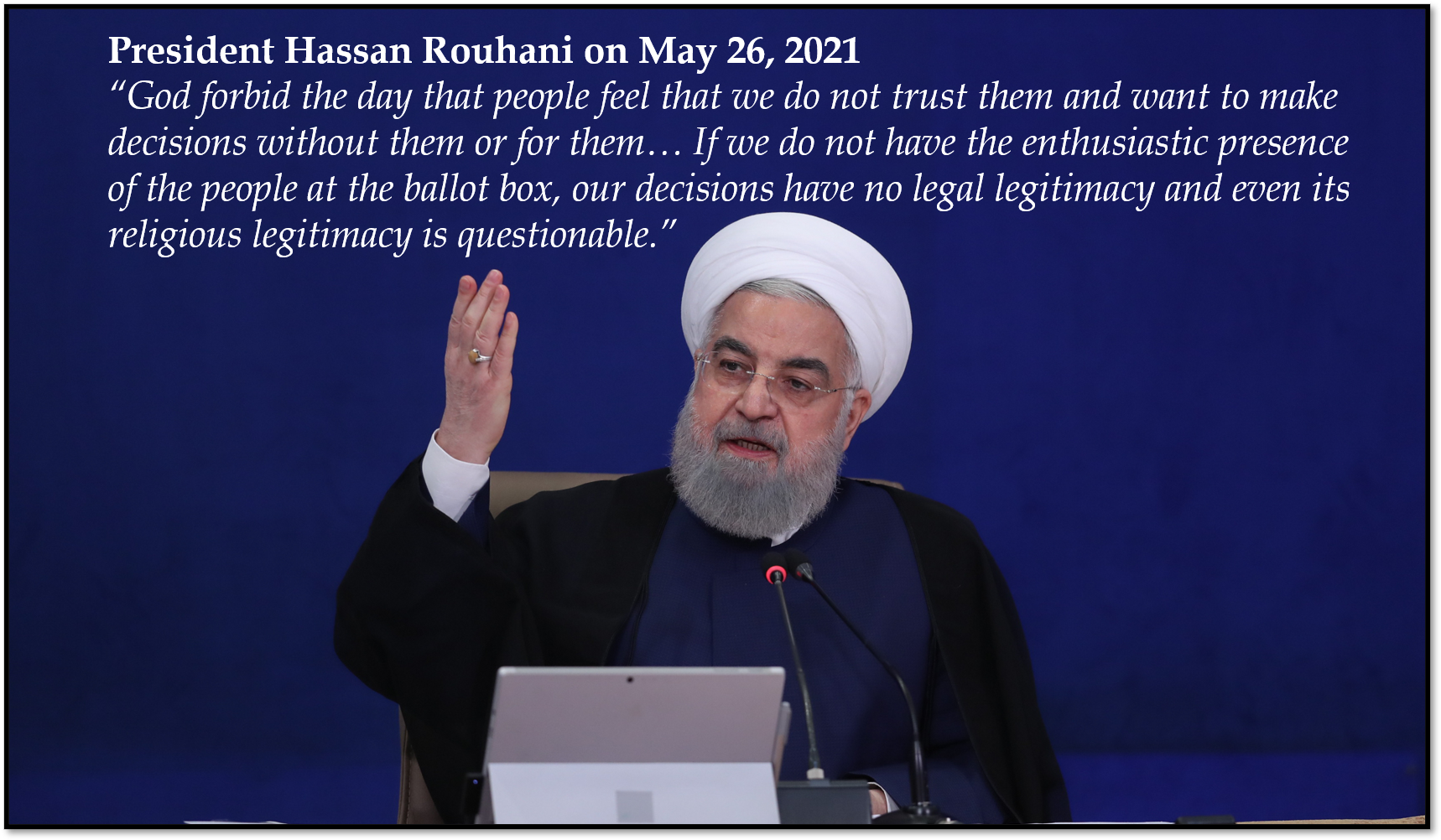 President Hassan Rouhani implored Supreme Leader Ayatollah Ali Khamenei to add more candidates to the race. “I sent a letter to the supreme leader yesterday on what I had in mind and on whether he can help with this,” Rouhani revealed in a cabinet meeting on May 26. “The heart of elections is competition. If you take that away it becomes a corpse,” he warned. The president said that he was concerned about a low turnout and that the political system’s “continued legitimacy” was at stake. Rouhani was at the end of his second term and thus not eligible to run in the election. The following are reactions from across the Iranian political spectrum to the disqualifications.

Sadegh Amoli Larijani, a Guardian Council member and the younger brother of rejected candidate Ali Larijani, blasted the decision in a series of tweets on May 25. "I have never found the council's decisions to be so indefensible, whether in approvals or disqualifications," he wrote. Sadegh, who is also chairman of the Expediency Council, blamed “security bodies” for influencing the Guardian Council decision with “false reports.” From 2009 to 2019, Sadegh served as judiciary chief, the same position held by presidential frontrunner Ebrahim Raisi. Sadegh had a personal rivalry with Raisi; in 2019, Raisi opened a corruption probe into Sadegh.

Mahmoud Ahmadinejad, the former president and a disqualified candidate, said in a video released on May 26 that he would boycott the elections.

Ebrahim Raisi, the judiciary chief and presidential candidate, disagreed with the Guardian Council’s decision. “I have made contacts and I am holding consultations to make the election scene more competitive and participatory,” he said in a video posted to Twitter on May 25.

Kian Abdollahi, the editor-in-chief of Tasnim, a hardline news agency, criticized the Guardian Council in a tweet on May 25. Elections should reflect “different perspectives” within the political system and even many “Hezbollahis” (hardliners) are unsatisfied with the candidate list, he wrote. “Your decisions should be publicly justifiable.”

Eshaq Jahangiri, First Vice President under President Hassan Rouhani since 2013, was among the disqualified candidates. Jahangiri harshly criticized the Guardian Council’s ruling in a statement on May 25. The disqualification of “many worthy people” is a “serious threat to public participation and fair competition,” he warned. Nevertheless, he accepted the decision and encouraged citizens to vote. Jahangiri’s candidacy had been backed by several reformist factions.

Mohsen Mehrlizadeh, the sole reformist candidate to qualify, criticized the decision to disqualify other reformists and asked the Guardian Council to allow for a more competitive election. “Promote others!” he tweeted on May 26.

Azar Mansoori, a member of the Reformist Front, an umbrella of smaller factions, blasted the decision as “illegal” and a “violation of people’s rights to vote in free elections,” The Guardian reported on May 25. “It has made elections meaningless,” she said.

The Reformist Front said on May 26 that the disqualifications “deal a heavy blow to people’s trust and hope for making any change through the ballot box.” In a statement, the group charged that the move not only eliminated reformists but excluded people from the decision-making process.

Etemad, a reformist newspaper, published an op-ed on May 25 that condemned the disqualifications. “The list of seven shows that there is a complete disconnect between the forces involved in the Guardian Council and society, with each travelling in their own world.”

Arman-e Melli, a reformist newspaper, published a headline outlining how “five major hopefuls” from across the political spectrum had been disqualified. “Well Done, Really!” the front page read on May 26. “In Unprecedented Move, Guardian Council Decreases Competitiveness of Iran Elections by Disqualifying Major Candidates.”

Shahrvand, a reformist newspaper, published a headline on the decision’s impact on voter participation, “No One Will Win an Election with Small Turnout,” the front page read on May 26. 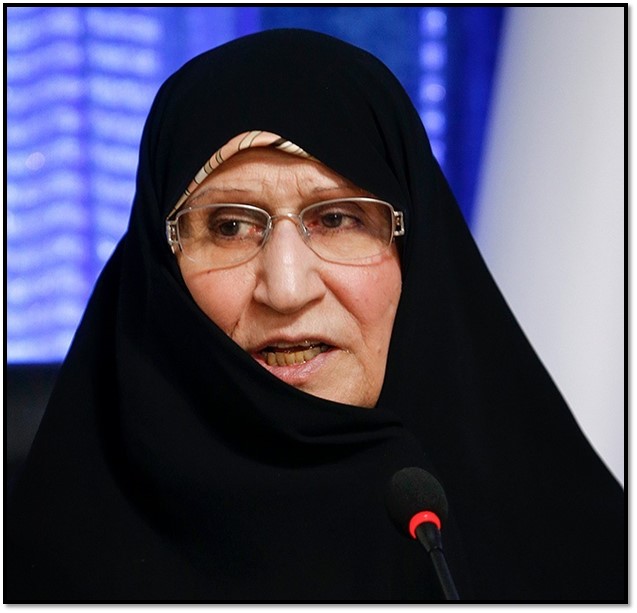 Zahra Mostafavi, Khomeini’s daughter, wrote that the disqualification of so many experienced officials, especially Larijani and Jahangiri, was “unbelievable.” She added that such decisions had been endangering the Islamic Republic for many years. “No system can stand against problems and dangers without relying on the support and trust of the people,” Mostafavi warned on May 25. 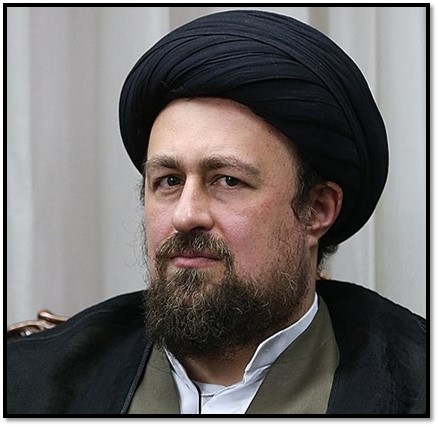 Seyyed Hassan Khomeini, a grandson of Ayatollah Khomeini, said on May 26 that any actions that weaken the republican aspects of the political system are “anti-revolutionary.” He asked rhetorically if today’s system could be the same one his grandfather set up if the people have no say in it. Khomeini, who had considered running for the presidency, said that he would resign if he were one of the seven approved candidates. He warned that the government that emerges from the election will not be able to solve the country’s problems. Khomeini he is widely considered the heir apparent of his grandfather’s legacy.