Iran’s presidential election is scheduled for June 18. Registration for candidates began on May 11, and seven candidates were selected to run on May 25. The poll will be pivotal to Iran's future since President Hassan Rouhani cannot run again; the Islamic Republic has a limit of two consecutive terms. The next president will set policy on both foreign relations, including diplomacy on Iran's nuclear program, and domestic affairs at a time of crisis due to economic sanctions as well as the COVID-19 pandemic.

In Iran, the presidency has often flipped between reformists or centrists and conservatives or principlists. The reformists have promised an array of social openings, press freedoms and accountability on human rights. They emphasize that the Islamic Republic of Iran is first and foremost a republic in which Islam is to be a guide and a check on the traditional institutions of power. Hardliners generally adhere to the rigid dogma of the 1979 revolution and argue that the supreme leader and God's law are the ultimate power. President Mohammad Khatami (1997-2005) is viewed as the most reformist president, while Mahmoud Ahmadinejad (2005-2013) is viewed as the most hardline. President Hassan Rouhani (2013-2021) is considered a centrist allied with the reformist faction.

On May 11, Supreme Leader Ayatollah Ali Khamenei said that the next government could benefit from harnessing the power of Iran’s youth. “The youth has all the requirements of a movement towards development, which are new thinking, creativity, strength and courage to act,” he said in an address to students. “Transformation is necessary.” Khamenei called for a “young revolutionary government” made up of experienced statesmen as well as youth. The supreme leader expressed public support for the list of candidates selected by the Guardian Council and called for high voter turnout. "Dear nation of Iran, do not pay attention to those who promote that voting is useless," he said on June 27.

There is widespread speculation both inside Iran and among experts abroad that the next president may be more conservative than Rouhani. The 2021 election was also be distinguished by the number of veterans from the Islamic Revolutionary Guard Corps (IRGC) contending for the presidency. The powerful Guardian Council – an unelected panel of 12 Islamic jurists and scholars – approved the final list of candidates. In the 2020 parliamentary election, it disqualified 7,296 candidates out of the more than 14,500 who registered to run. The vetting prevented reformists, including incumbents, from fielding candidates for 230 out of parliament’s 290 seats. The following is a rundown of the candidates, elections rules, and schedule as election season begins.

On May 25, Iran approved seven candidates to run for president. A total of 592 candidates, 552 men and 40 women, had registered to run. The Guardian Council said that only 40 men met the basic qualifications. The council whittled the list down to seven candidates – less than two percent of those who registered. It included five conservatives, one centrist and one reformist:

The Guardian Council barred at least four experienced politicians; three had been cleared to run in previous elections. They included:

Piety and background: Article 115 of the constitution stipulates the qualifications for presidential candidates: “The President must be elected from among religious and political personalities possessing the following qualifications: Iranian origin; Iranian nationality; administrative capacity and resourcefulness; a good past-record; trustworthiness and piety; convinced belief in the fundamental principles of the Islamic Republic of Iran and the official religion of the country.”

Gender: The constitution does not specify a gender for the presidency. The Guardian Council has never cited gender as grounds for disqualification, although it has never qualified a female candidate. The first woman to register to run, in 1997, was Azam Taleghani, a women’s rights advocate and the daughter of a prominent revolutionary cleric. Women have continued to register in increasing numbers. In 2017, a record number of women—137– registered. In September 2020, Abbas-Ali Kadkhodaei, a Guardian Council spokesman, said that there was no legal prohibition against a woman president. But he added that the body had also not yet ruled on how to interpret the article—or the word rejal, which comes from the Arabic word for men but could also mean “personalities.”

The president must receive more than half the vote. If no candidate wins more than 50 percent, the two top candidates compete in a runoff. Since the 1979 revolution, Iran has only had one runoff. In 2005, Ali Akbar Hashemi Rafsanjani won 21 percent and Mahmoud Ahmadinejad won 19 percent. Ahmadinejad won in the runoff with 62 percent of the vote.

Data on Past Elections 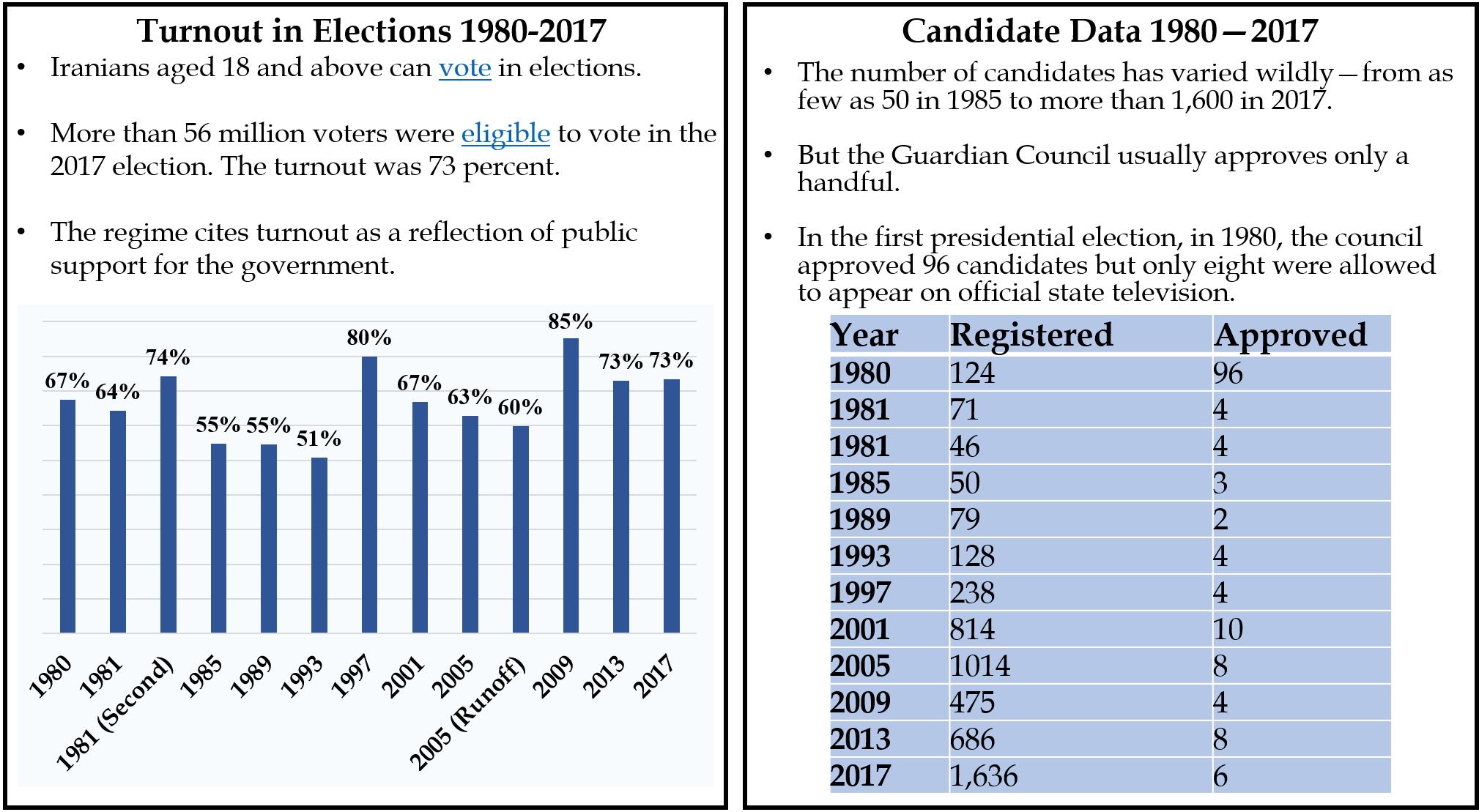