On June 22, Michelle Bachelet, the U.N. High Commission for Human Rights, criticized Iran for its “widespread use of the death penalty, and its arbitrary imposition for a range of acts that under international law do not constitute ‘most serious crimes.’” The following is her statement to the U.N. Human Rights Council on a new report on human rights violations in Iran. 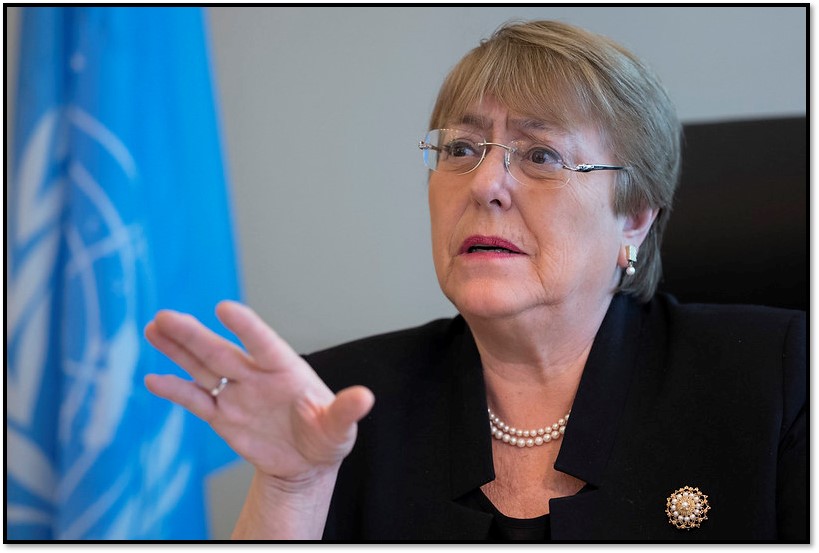 U.N. High Commissioner for Human Rights Michelle Bachelet on June 22, 2021: “Pursuant to General Assembly resolution 75/191, the Council has been presented with the report of the Secretary General concerning the situation of human rights in the Islamic Republic of Iran, A/HRC/47/22. It covers the period from 1 June 2020 to 17 March 2021.

“Economically, the country is facing deteriorating living standards, high inflation, and widespread unemployment, fuelling discontent and protests. At the political level, the authorities have shown no willingness to adopt meaningful reforms. Sectoral sanctions have aggravated economic distress, and the COVID-19 pandemic has badly hurt the already strained health sector.

“The Secretary-General continues to be deeply concerned by widespread use of the death penalty, and its arbitrary imposition for a range of acts that under international law do not constitute "most serious crimes". In violation of human rights law, death sentences are also frequently imposed based on forced confessions extracted through torture or after serious violations of the right to a fair trial.

“In 2020, at least 267 people, including nine women, were executed – but only 91 of these executions were announced. So far in 2021, at least 95 people have been executed in Iran, six of them women. Over 80 child offenders are on death row, with at least four at risk of imminent execution. There has been an increase in executions for drug-related crimes, in particular of individuals from ethnic and religious minorities.

“Last year at least 69 Kurdish individuals were executed, including some after convictions under vaguely defined charges – "acting against national security" or "membership of Salafi groups". Many individuals from the Arab minority remain on death row or have been subjected to enforced disappearance following arrest. Three were executed in secret on 28 February. There also appears to be an increase in executions of members of the Baloch minority and other minority groups.

“The report documents additional violations faced by ethnic, religious and other minorities.

“I note also that the retrial of three demonstrators previously sentenced to death for participating in the protests of November 2019 has yet again been postponed. Let me again emphasise my concern, and that of the Secretary-General, regarding the use of unsubstantiated charges to condemn protestors to death.

“The use of inappropriate force by security forces against protesters and bystanders in November 2019 amounted to the worst incident of State violence at protests in decades. However, protesters, human rights defenders, lawyers, journalists and civil society actors continue to be subjected to intimidation, arbitrary detention and criminal prosecution, including the death penalty.

“To date, there has been no accountability for any of the gross human rights violations committed by security forces in response to protests. Neither has there been any notable effort to address large numbers of documented cases of torture and ill-treatment of children, women and men, linked to the justice system's reliance on forced confessions. In this as in many other respects, persistent impunity for human rights violations remains a crucial concern.

“I also note the high number of reprisals carried out by State agents and entities against people who cooperate with our UN human rights mechanisms.

“Regarding the continued repression of civil society activity, Iran's largest and best-known civil society group, Imam Ali's Popular Students Relief Society, was forcibly dissolved through a court decision in March. A range of measures have undermined the independence of Iran's bar associations, and several lawyers have been charged or convicted on national security charges for participating in workshops outside Iran, or simply for defending their clients.

“Other lawyers – as well as numerous civil society activists – have been imprisoned for advocating women's rights and an end to compulsory veiling laws. The law on "preserving the dignity and protection of women against violence", which is currently before Parliament, is a step forward in criminalizing violence and sexual harassment of girls and women, but it fails to provide effective guarantees to protect women against violence, or to ensure remedies. It also does not criminalize child marriage or marital rape, and fails to repeal the multiple discriminatory provisions against women in Iran's Civil Code.

“The Sentence Reduction Law, which entered into force last year, is a positive step and has led to the release of some imprisoned human rights offenders. Among them, the Secretary-General's report welcomes the release of Narges Mohammadi, a female journalist and former deputy director of the Defenders of Human Rights Centre. Regrettably, last month she was again arbitrarily convicted, and was sentenced to 30 months imprisonment and 80 lashes – prohibited under international human rights law, and part of a pattern in which new charges are brought against human rights defenders and political prisoners to prevent their release or return them to prison. Just a few days ago she was also violently attacked by apparent State Security agents who warned her that her activities threatened the State and should be stopped.

“The report also confirms consistent testimony of mistreatment of prisoners, including widespread and extended use of solitary confinement – used as a form or punishment and to prevent information from inside the prison to reach the outside world.

“Overall, the report finds a disturbing human rights landscape for Iranian women and men of every religious faith, ethnic origin, social class and other status. We regret that the framework for the right to political participation is not in line with international standards.

“The Office stands ready to work with Iran's leadership to establish a more secure human rights foundation for the country.”