In a nationwide public opinion poll, almost half of Iranian voters surveyed said that they favored Ebrahim Raisi, the hardline chief of the judiciary, in the seven-way contest for president on June 18. But less than 42 percent of voters said that they were likely to vote, which would be the lowest turnout for a presidential election since the 1979 revolution. The poll of 5,000 registered voters was conducted in face-to-face interviews by the Iranian Student Polling Agency (ISPA) between May 30 and June 1.

Who Will Iranians Vote For?

Raisi was the early frontrunner among a plurality of voters (48.6 percent).

The other six candidates fared poorly among voters—all around three percent or less. Mohsen Rezaei, a former Revolutionary Guards commander, was the only other candidate to poll above two percent. Abdolnasser Hemmati, the former Central Bank governor under President Hassan Rouhani, polled only 1.3 percent support. Reformist candidate Mohsen Mehralizadeh came in last at only 0.1 percent.

But the poll also reflected voter uncertainty. As of June 1, more than 40 percent of respondents said that they had not decided on a candidate.

In the past, Iranians have also turned to dark horse candidates in the final days of the campaign. In 1997, voters elected Mohammad Khatami, the head of the Iranian library system. In 2005, they elected Mahmoud Ahmadinejad, the hardline mayor of Tehran, instead of former president Akbar Hashemi Rafsanjani.

In a separate question, voters were asked how they would vote if the election were held immediately. Raisi fared even better with an overwhelming 70.4 percent.

How Committed Are Voters?

Iranian voters were largely committed to their choices. More than three-quarters of those surveyed (77.8 percent) said that they would not change their mind in the final three weeks of the short campaign. Only 18.4 percent of respondents said that they were open to changing their mind.

Will Iranians Turn Out? 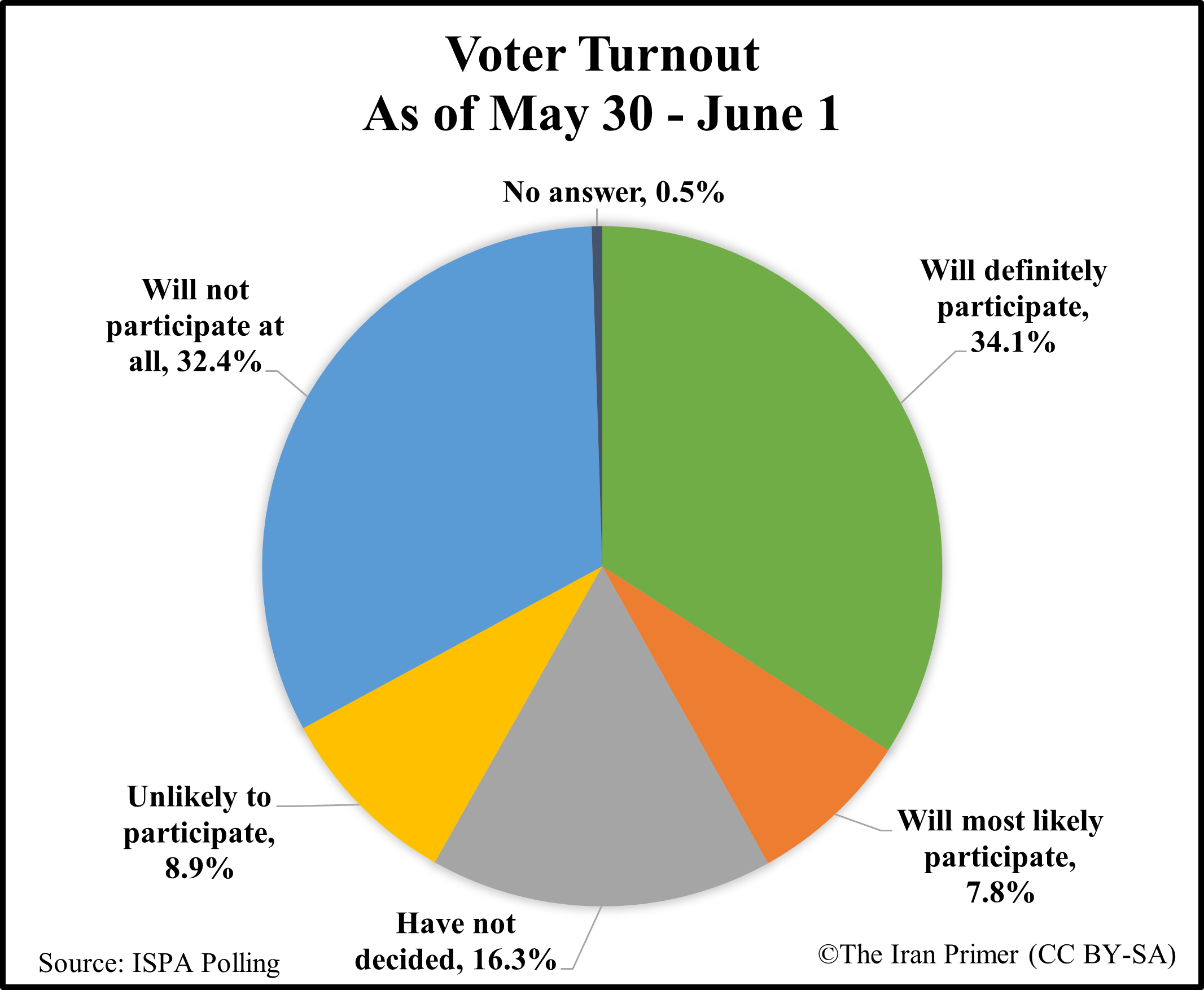 In the June poll, less than three weeks before the election, less than half of all voters (41.9 percent) surveyed said that they would “definitely” or “most likely” participate in the election. An equal number (41.3 percent) said that “will not” or were “unlikely” to vote.

Andrew Hanna, a program specialist at the U.S. Institute of Peace, compiled this report.