On July 28, Supreme Leader Ayatollah Ali Khamenei accused the United States of being “obstinate” and “cowardly” in talks on restoring full compliance with the 2015 nuclear deal. “On paper and in words, they promise to remove the sanctions, but they have not and will not remove them,” he told President Hassan Rouhani and his cabinet.

From April to June, Iran and the world’s six major powers—Britain, China, France, Germany, Russia and the United States—held six rounds of talks in Vienna. The talks stalled during and after the June 18 presidential election, which was won by Ebrahim Raisi, the hardline head of the national judiciary. Iran said it would not return to Vienna for a seventh round of talks until after Raisi’s inauguration on August 5. Khamenei, however, blamed the United States and European powers for the break in the talks. “The West and the United States are totally unjust and malicious in their negotiations,” he added. Khamenei also warned Iranian officials against trusting the West. The following are excerpts from his address. 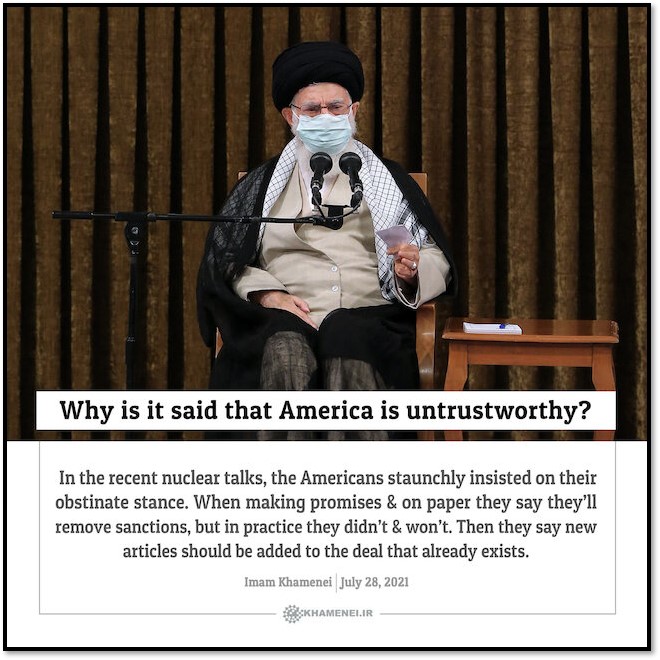 “It became clear in this administration that trusting the West will not work as they are not going to help us, and they will strike a blow whenever they can. When they do not strike a blow, it is because they do not have the means to do so. Whenever they could, they struck a blow. This is a very important lesson.”

“Whenever you made our affairs contingent on reaching an agreement with the West and the U.S., you were unsuccessful and unable to advance. But whenever you didn’t count on them and began to use different methods of our own, you made progress.”

“The Americans have stuck to their obstinate position. On paper and in words, they promise to remove the sanctions, but they have not and will not remove them.”

“The Americans have set a condition. They say, ‘If you want the sanctions to be removed, we should include a clause in the agreement which states that we must negotiate and agree over certain matters in the future. If you do not accept this clause, we do not have an agreement at the present time.’ What is this clause? This clause is actually a pretext for their future interference.”

“This is about the JCPOA (Joint Comprehensive Plan of Action) itself, about renewing it and about various other matters such as missiles and regional issues. If we say later on that we are not going to negotiate over these matters because the policies of the country and our parliament do not allow us to do so, they will say that there is no deal because we have supposedly violated it.”

“They have already violated the agreement one time without facing any cost for doing so. Now too, when they are told to promise and guarantee that they will not violate it another time, they respond that they cannot give such a guarantee. They are saying this explicitly to our friends and our diplomats. They say they cannot and will not promise such a thing.”