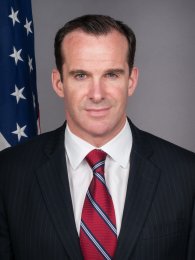 Before he was appointed to the National Security Council, Brett McGurk criticized the Trump administration’s “maximum pressure” campaign against Iran as counterproductive to U.S. interests. “Iran is now behaving more provocatively, not less,” despite extensive U.S. sanctions, he wrote in Foreign Affairs in January 2020. “It’s stockpiling more enriched uranium, not less. It’s spinning more centrifuges, not fewer, and continuing to support proxy groups in Iraq, Syria, Lebanon, and Yemen.”

McGurk resigned as presidential envoy for the anti-ISIS coalition in December 2018 after President Donald Trump threatened to withdraw U.S. forces from Syria. He became a vocal critic of the Trump administration’s Iran strategy after leaving office. “Washington cannot point to any goal that the policy has advanced, it now touts economic pressure as an end in itself, as if the policy were designed simply to make Iran poorer, as opposed to changing Iran’s nuclear and regional policies (all of which are now worse) for the better,” he wrote. In January 2021, Biden appointed him coordinator on Middle East and North African issues at the National Security Council. The following are remarks by McGurk on Iran.

On diplomacy to restore the 2015 nuclear deal

At a Carnegie Endowment for International Peace event on Jan. 27, 2022: “This morning, the former chief of the Israeli Israel Defense Forces that the last administration's decision to get out of the JCPOA was a strategic mistake, and it led to an unshackled Iranian nuclear program. And I just go back and read where we were at the end of, you know, a couple of months before we walked in here and say December 2020, we had two dozen rockets falling at our embassy in Baghdad. We were flying B-52 bombers from continental United States, the Middle East and back to shows of force. We had Iran enriching uranium to 20 percent. This is something that we inherited from that decision. And we're not we're not placing blame. That's not our job. This is on our watch. It is our responsibility.

“But this problem is not one that we should be having because the JCPOA, whatever you want to say about it, it didn't put a cabinet on Iran's nuclear program through 2031 and where we are right now, given the advances of Iran's nuclear program, and it was predicted when that decision was made by some that Iran would never dare restart its nuclear program. I think anyone who knows Iran has dealt with the Iranians has looked at it would have said that's actually the opposite. What's going to happen? So we're now on the verge of a nuclear crisis because Iran's program has advanced, even as it has faced tremendous setbacks, it continues to advance. And it's getting to the point where the breakout time, the time out, which would have enough fissile material to be able to divert material for a weapons program and we could not detect it, prospectors cannot detect it. We're starting to approach that window. So this is an extremely serious situation.

“At the same time as Secretary Blinken and others have said repeatedly, these talks will have a combination point and we're actually reaching that combination point pretty soon. And we're going to know very soon whether or not it is possible for the Iranians to return to compliance with the nuclear deal on terms that we and the international community can accept. So I'll just say, Aaron, we have over the last year united the P5 plus one. The Iranians have been surprised by the United Front that they have hit, especially the new Raisi regime. And we're basically now in the negotiations back to where we were at the end of last summer, which means there's a chance for a deal. And there's also a pretty good chance there's not going to be a deal. And I will tell you we are prepared for either scenario, right? It's less true if there's no deal, we're very prepared for.”

“When the Raisi team came back to talks in December, they walked in the door with all sorts of walking back everything that had been done over the course of the summer in the former administration of Rouhani, and we had a choice, we could just walk away from the table. In fact, what happened was the Iranians met a united front not only the E3, but also the Russians. The riyal collapsed, the Iranian currency collapsed to an all time low, and the Iranians came back a week later with completely different proposals. So you know that, in my view, is pretty good diplomacy. We're in the ballpark of a possible deal. But again, I am not going to put odds on this. There’s a very good chance these talks collapse very soon, and then we're going to shift to something else, we're ready for that.”

Essay in Foreign Affairs on Jan. 22, 2020: “Economic pressure was supposed to enhance American leverage and make Iran more pliant going into new negotiations. Trump himself said he intended to end wars and move forces out of the Middle East region altogether. The unforeseen escalatory cycle is evidence of a policy not working as intended.

“As for the aims the secretary of state listed two years ago, the maximum pressure policy is failing to achieve any of them. Iran is now behaving more provocatively, not less. It’s stockpiling more enriched uranium, not less. It’s spinning more centrifuges, not fewer, and continuing to support proxy groups in Iraq, Syria, Lebanon, and Yemen. Because Washington cannot point to any goal that the policy has advanced, it now touts economic pressure as an end in itself, as if the policy were designed simply to make Iran poorer, as opposed to changing Iran’s nuclear and regional policies (all of which are now worse) for the better.

“Indeed, even where the [maximum pressure] policy has been effective in choking Iran’s economy, it has done so at the cost of aggravating the very allies Washington needs if it is to sustain a competition against great-power rivals. The United States has increasingly imposed what are known as “secondary sanctions” on Iran. These constrain U.S. allies, including France, Germany, and the United Kingdom, as well as their private companies, from engaging in trade with Iran that is otherwise legal. Washington is effectively using its economic might to coerce allies into enabling a policy that those allies believe is self-defeating and unacceptably high-risk.”

On Iran’s support for armed proxies

Essay in Foreign Affairs on Jan. 22, 2020: “Beginning this past October, Kataib Hezbollah (KH), an Iranian-backed militia in Iraq, began what senior U.S. military commanders called a ‘sustained campaign’ of rocket attacks on Iraqi bases hosting American forces. These were the first such strikes that KH had undertaken in more than eight years. Having failed to anticipate Iranian reprisals against maximum pressure, the United States later failed to deter the assault or to act effectively once it began. Senior U.S. officials have even speculated that the lack of any American response to the earlier attacks in the Gulf may have encouraged the subsequent attacks on Americans in Iraq.”

“[A] weak Iraqi government risks making the United States unable to stay in Iraq at all, an outcome that has long been Iran’s ultimate aim.”

Speaking on MSNBC on Jan. 3, 2020: “We [the U.S.] need to presume that we are in a state of war with Iran. This has been a covert war, a shadow war, for 40 years but with this action I think we need to presume — to protect our people in the region, to protect our interests — that we’re in a state of war with Iran. And that it not something that the Trump administration appears to have been prepared for.”

“We’re now drawn back into the Middle East and we need to be very well-prepared.”

Question: “How significant were Iran’s attacks on U.S. troops in Iraq in response to Soleimani’s assassination?”

McGurk: “It's a major escalation - the first time Iran is really taking credit for a kind of military attack against us.”

“I think this might be the end of Iranian-sponsored direct military attacks, but their MO is to act through proxy. So, you know, all the provocations we've seen since May of last year, which has led to the American troop deployments, the attacks against Gulf shipping, the attacks against Aramco in Saudi Arabia, Iran is not taking credit for any of those attacks.”

“Soleimani did have real discipline over this group. So his removal from the scene, while I think is a net positive but also does increase the risk of some of them acting on their own, acting with less discipline and sparking something that could get out of hand”

Essay in Foreign Affairs on Jan. 22, 2020: “The strike on Soleimani brought U.S. policy contradictions to a head. Tehran has reacted by working to consolidate its grip internally.”

“The impression the president left was that the Soleimani strike was a tactical operation to protect Americans, not part of a strategic reorientation one way or the other. Trump asked NATO ‘to become much more involved in the Middle East’—something the alliance is unlikely to do, given that it acts only with the unanimity of 29 capitals, many of which blame Trump for the current crisis.”