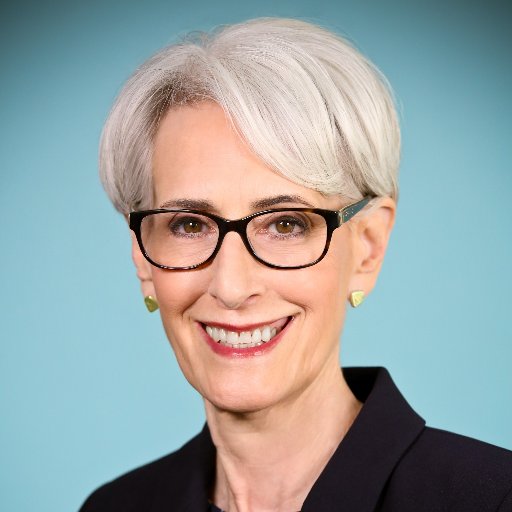 Before she was appointed Deputy Secretary of State, Wendy Sherman had pushed for a swift return to the 2015 nuclear deal, formally known as the Joint Comprehensive Plan of Action (JCPOA). She urged the Biden administration to immediately begin consultations with Europe, Russia and China on preserving the JCPOA after taking office. “It's important for the U.S. to start its consultations as quickly as a new administration can,” Sherman said at Johns Hopkins University on November 19, 2020. Any new diplomacy with Tehran, she said, should also focus on Iran’s ballistic missile arsenal. “There are lots of issues that we have to address, including ballistic missiles all over the world, because particularly long-range ballistic missiles are a threat to the United States if they can carry a nuclear weapon.”

During her confirmation hearing, Sherman was circumspect about the prospect of new diplomacy. "The facts on the ground have changed, the geopolitics of the region have changed, and the way forward must similarly change," she told the Senate Foreign Relations Committee on March 3. Sherman was confirmed by a vote of 56 to 42 on April 13. The following are remarks by Sherman on Iran.

Confirmation hearing on March 3, 2021: “With respect to Iran, as the lead of the U.S. negotiating team for the JCPOA, I remain clear-eyed about the threat that Iran poses to our interests and those of our allies. I am ready to address your questions about the JCPOA, but would note that 2021 is not 2015 when the deal was agreed, nor 2016 when it was implemented. The facts on the ground have changed, the geopolitics of the region have changed, and the way forward must similarly change.”

Question: “Joe Biden wants back into the Iran nuclear deal. How much harder was that task made by the assassination of Iran's top nuclear scientist the other day?”

Sherman: “It has undoubtedly complicated it. The actions of the parliament, the Majles, as it's called in Iran, and the Guardian Council, which stepped in yesterday to say they're going to accelerate their program and give the United States until probably about mid-February to lift some of the oil and bank sanctions in retaliation, in part at least for that assassination, complicates diplomacy, but it absolutely does not foreclose it. And I strongly support the president-elect wanting to reenter this deal.”

Question: “Was that the goal of the killing? While many believe it was Israel, they haven't claimed responsibility, was the goal to make it more difficult for President-elect Biden to re-enter the deal?”

Sherman: “There certainly has been that speculation, but I don't think the intention is really the driving force here. When you negotiate, when you try to solve a world problem, you have to deal with the facts on the ground. And the facts on the ground now are some complications. So, I must say some of the most profound complications are Iranian politics. They have an election coming up in June. It means that they're going to start focusing on that. Their parliamentary elections last year went over to the folks I call the hard hardliners, the very most conservative in their country.  See if that's the case for the presidency. But they also have an economy that's devastated and a COVID surge of their own. So Iranian politics matter here too.”

Question: “Have the sanctions worked or has Iran just gotten more dangerous since we left the nuclear deal?”

Question: “Speaking of strategy, there are reports that in early November [2020] he was talked out of a strike on some of Iran's nuclear facilities. How concerning would that be to you?”

Sherman: “Extremely, for a number of reasons. One, in terms of getting a nuclear weapon, we can eliminate their nuclear facilities, but then they would be most likely rebuilt underground and in secret and be able to do so within three to five years because you can't bomb away knowledge. They know how to do all of this. Secondly, even if someone thought you could do a quote unquote surgical strike and just deal with their nuclear facilities, they would feel they had to retaliate and we might get into an escalatory cycle that would lead to an Arab-Persian war, which certainly is not anything the American people want. It's not anything that increases stability in the region. As the president-elect said, diplomacy is really the only thing permanently and verifiably that can create stability.”

Question: “What is it that the United States would need from Iran and what is possible for any American administration to give in order to resuscitate the deal?"

Wendy Sherman: "I certainly think that will include consultations with the U.K., France and Germany, as well as the European Union writ large. It will even include some consultations with Russia and China, with whom we will have very complicated relations in the next administration. And it will take some homework on our part to see where we are, what sanctions have been added, where our partners in the JCPOA are, where Iran is.

“Iran will be doing its own thinking. They are approaching a presidential election in 2021, which you probably know better than I will be quite a conservative election because the parliamentary election this last year put what I call more ‘hard hardliners’ in place instead of hardliners. And I suspect that's the way the presidential election will go as well. Rouhani cannot run again.

"Iran has had to deal with COVID just like every other country has and has had a very rough time. Then again, the United States has had a very rough time, but Iran is continuing to build its relations with countries to try to position itself in the best place possible for the Biden-Harris administration. But I don't think it's going to be on day one [that] everything will fall back into place. That's not going to happen."

Question: “There's been some debate about whether it's beneficial for the United States to aggressively try to start the process with the existing Iranian administration, given the fact that they have a vested interest in the JCPOA and have already negotiated once with the United States or to actually wait until there is a new order in Iran. What are your thoughts?”

Sherman: “It's important for the U.S. to start its consultations as quickly as a new administration can."

Op-ed in Foreign Affairs on Aug. 13, 2018: "Trump has turned Iran into a nearly impossible problem for future administrations. His behavior has given U.S. allies less reason to trust Washington on future deals or to take U.S. interests into account. He has thrown away a hard-nosed nuclear deal that set a new standard for verification, and he punched a hole in a highly effective web of sanctions and international consensus that made the Iran deal—and future deals like it—possible.

"The JCPOA represents the state of the art of professional multilateral diplomacy. As Trump is now finding out through his difficulties in pinning down a deal with North Korea, verifiable nuclear agreements backed by U.S. allies and adversaries are hard to come by. With every threat Trump tweets and every list of empty promises his administration releases, the Iran deal looks better and better."

Question: "How would the United States think about... engaging [regional actors] without giving them a veto over the process or without getting Iran to balk at the idea?"

Sherman: "The fact is that the Gulf Arab states and Israel were incredibly engaged throughout the negotiating process. I met myself with the ambassadors from the Gulf Arab states and Jordan and others before and after every negotiating round. I met with Israel on a constant basis as well. And when we began the negotiations, the Gulf said, just make sure you only focus on nuclear issues because if you're going to discuss regional issues, we need to be in the room.

"When it looked like we were about to have an agreement and we were approaching our presidential election, I began to hear quite a different message, which was: 'how could you finish all of this and not deal with all the issues in our region?' And I understand that. I understand it politically. I understand it conceptually. And I think that there's no doubt that anything that moves forward will have to have a very complex consulting regime that is part of the process.”

Question: “In 2018, Europe reportedly offered to impose ballistic missile sanctions on Iran, if President Trump remained in the deal. Will the E3 take actions on missiles, if the U.S. reenters the JCPOA?”

Sherman: “I don't know the answer to that question. The Europeans were very close I understand... to an agreement that would have kept the deal in place with some additional pillars, as was the term at the time. And then President Trump, it's my understanding, decided he didn't want those negotiations to go any further because he really, truly just wanted to blow up the JCPOA and didn't want there to be a way out of doing that, which that agreement might have offered. I think that ultimately there are lots of issues that we have to address, including ballistic missiles all over the world, because particularly long-range ballistic missiles are a threat to the United States if they can carry a nuclear weapon. So, there's a lot of nonproliferation and arms control work that has to be done. It's very difficult work. And certainly, there are countries in Europe that are ready to commit to that hard work. And I hope there are countries all over the world who are ready to commit to that hard work.”