In Iran, the attempt to seize the Capitol in Washington on January 6 generated live television coverage, widespread commentary and denunciations by top officials. President Hassan Rouhani said that the unrest reflected the frailty of the American political system. “What we saw in the U.S. last night and today really showed … how floppy and weak Western democracy is, and how weak its foundations are,” he said on January 7.

Officials disparaged President Trump personally for encouraging his followers to act. Foreign Minister Mohammad Javad Zarif called Trump a “rogue president who sought vengeance against his OWN people” in a tweet on January 7.  Rouhani said that Trump had “tainted his country’s reputation and credibility” and “disrupted U.S. relations with the entire world.” He called on the incoming Biden administration to “make amends and return their country to the position that the great nation of America should have.”

Iranian media, including the state television channel IRINN, covered the unprecedented protest live throughout the day, despite the more than eight-hour time difference between Washington and Tehran. Two political commentators on IRINN gloated about the crisis. Iranian social media accounts and online news sites reposted dozens of photographs of protestors breaching the Senate chamber and confronting Capitol Police officers. The hardline Fars News Agency erroneously reported that Mayor Muriel Bowser had declared martial law. (She actually imposed a 12-hour curfew). “Biden and Trump Supporters Punched and Kicked Each Other in Front of the U.S. Congress,” read a front-page headline in Kayhan, a hardline newspaper, on January 7. The following are Iranian official and media reactions to the attempted insurrection.

During a televised address to inaugurate new factories on Jan. 7, 2021

“What we saw in the U.S. last night and today really showed that first how floppy and weak Western democracy is, and how weak its foundations are.”

“We saw how much influence populism has in these countries, despite all the progress in science and industry.”

“We saw that a populist [Donald Trump] came to office and what damage he caused to his own country. He tainted his country’s reputation and credibility. He disrupted U.S. relations with the entire world.”

“You see that a unhealthy person comes and takes power, affecting U.S. relations with the world and undermining the relations of the United States with the entire world and inflicting a lot of damage on our region and Palestine, Syria, Yemen and all regions in the world.”

“I hope this is a lesson for the whole world and for the next rulers of the White House, who will take power in two weeks to come and make amends and return their country to the position that the great nation of America should have.”

“We hope that we can see less of such illiterate people who seek the interests of their own family and personal interests in running a country both in that country and the world, and God willing, we will see a better situation in the region and the world.”

A rogue president who sought vengeance against his OWN people has been doing much worse to our people—and others—in the past 4 years.

What's disturbing is that the same man has the UNCHECKED authority to start a nuclear war; a security concern for the entire int'l community.

Those who succumbed to Trump's lawless bullying for 4 yrs—to protect their skin at OUR people's expense—now condemn his assault on the rule of law.

But still try to use his #EconomicTerrorsm against Iran as “leverage"

If you can't grow a spine, gain foresight—for your own sake.

“In your opinion, what causes the America of the past few decades, which dominated the world by war, coup d’état and influence, to be incapable of achieving its main goals around the world today, and bring them to an unmanageable situation?”

In the Election 2016, #Trump's mental health was questioned. Following #CapitolHill events, some senators demanded his removal under the 25th Amendment of constitution with same reason. What is the response to the ones in #Iran who were about to negotiate with this madman?

“What we have seen over the past two months following the United States’ presidential election has been part of the unaltered image of the U.S. establishment, which has been further unmasked over the past four years with the Trump administration in office.”

“Part of Trump’s domestic legacy is the issue of vote rigging [claims] as well as street unrest and the attack on Congress, which disrupted an official congressional session.”

“Over the past four years, the Trump administration’s destructive and wrong policies have not only increased the United States’ decline but have triggered insecurity as well as political and economic instability around the world.”

“When Trump breached the U.S. commitment and unilaterally withdrew from the JCPOA and other international agreements, and afterwards illegally slapped sanctions on our people through the ‘maximum pressure’ policy and imposed an economic war on them and, in a cowardly act, assassinated general Soleimani, we said repeatedly that he will discredit the U.S. government and put an end to his political life.”

“Those warnings may now be understood better after that shameful day for the U.S.-style democracy in Congress.”

“The Trump administration’s populist policies and their destructive results in the United States and on the international stage should be an object lesson for the new U.S. president, who should make up for the past and not repeat the mistakes of the Trump administration with other methods with regards to pressuring independent countries and withdrawing from international agreements.”

Hossein Dehghan, military advisor to the Supreme Leader and candidate for president

“Tonight, the world is watching the American dream. The designer of all the riots, coups and color revolutions in the world, today its congress is occupied by protesters.

“Hazrat Amir (AS) said: God knows the glory of the abolition of the oppressors.

“I came to know God Almighty by making [sudden] decisions.”

When a populist and unprofessional politician becomes president and refuses to transfer power peacefully!#US_hot_winter#AmericanDemocracy pic.twitter.com/ZA9R3xUPeb

Biden and Trump Supporters Punched and Kicked Each Other in Front of the U.S. Congress 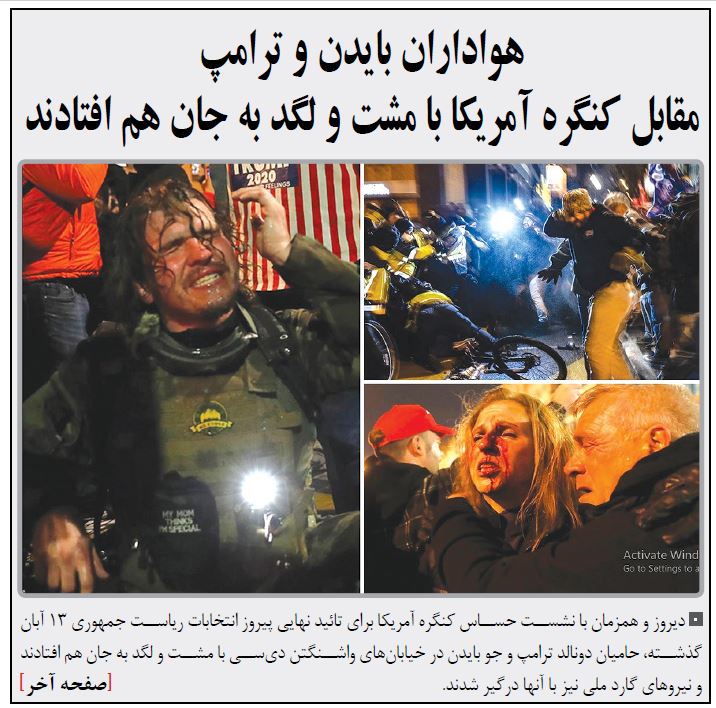 1- Iran Leader: US Mocked by the Entire World

2- Congress Collapses Out of Shame 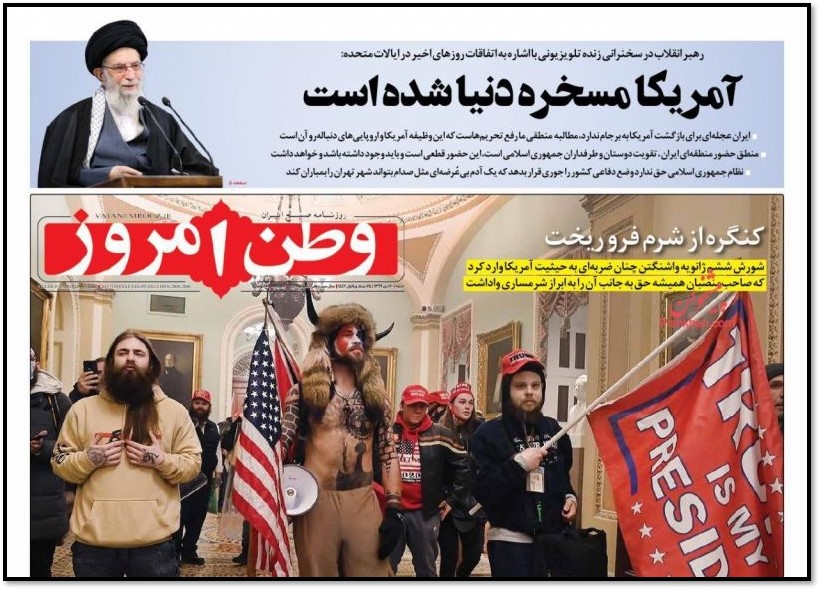 Crack in Congress of Liberal Democracy 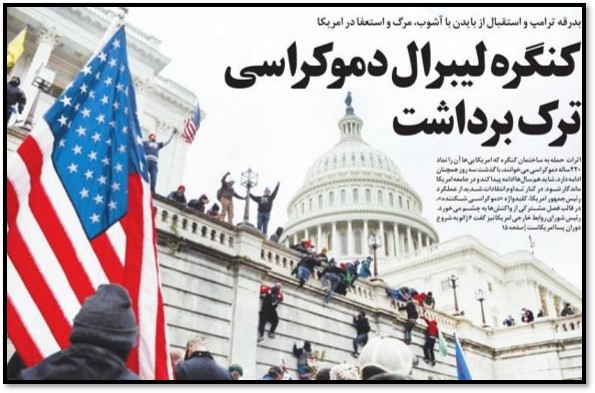 Assault on Bubble of Democracy 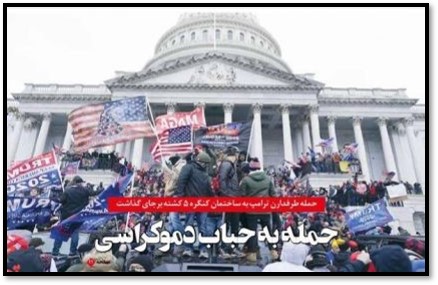 Without interrupting its regular programming, #Iran's rolling news channel IRINN is carrying live footage of the protests outside the #CapitolBuilding and running a breaking news ticker on the protests. pic.twitter.com/cbqedtmMW7