On February 28, Iran rejected the U.S. offer to attend a meeting of the so-called P5+1 countries – Britain, China, France, Germany, Russia and the United States – to chart a diplomatic way forward on Iran’s nuclear program. Foreign Ministry spokesman Saeed Khatibzadeh said that the Biden administration had not set aside President Donald Trump’s so-called maximum pressure policy. “Given the recent moves and positions of the U.S. and the three European countries, the Islamic Republic doesn’t assess the timing of an informal meeting proposed by the EU coordinator as appropriate,” Saaed Khatibzadeh, Iran’s foreign ministry spokesman, said. “The path ahead is very clear: The U.S. should end its illegal and unilateral sanctions and return to its JCPOA [Joint Comprehensive Plan of Action] commitments.”

Iran had initially reacted to the U.S. offer, announced on February 18, by once again demanding that Washington lift all sanctions imposed by the Trump administration between 2018 and 2021 as a precondition to roll back its breaches of the 2015 nuclear deal. “Gestures are fine. But to revive P5+1, US must Act: LIFT sanctions,” Foreign Ministry spokesperson Saeed Khatibzadeh tweeted. “Here is the key sequence: #CommitActMeet.”

Iran began breaching the nuclear deal in July 2019 in tit-for-tat responses to the Trump administration’s withdrawal from the nuclear deal and imposition of hundreds of sanctions. Iran has also been frustrated with European countries for failing to provide the economic benefits promised under the historic agreement. “Our remedial measures are a response to US/E3 violations,” Foreign Minister Mohammad Javad Zarif tweeted on February 18. “Remove the cause if you fear the effect.”

For seventeen months, the breaches had been largely incremental and calibrated, then Mohsen Fakhrizadeh, the father of Iran’s nuclear program, was assassinated, on November 27, 2020. Three days after his death, Iran's parliament enacted legislation demanding that the government immediately increase enriching uranium – from 4.5 percent to 20 percent -- a step that could bring Tehran closer to attaining fuel for a bomb. It would then take at least another year, and possibly two years, to then build a bomb and marry it to delivery system, according to experts.

The new law also set a deadline of February 23 for the United States to lift sanctions--or Iran would halt “snap” or “short-notice” inspections of undeclared sites, a provision of the Additional Protocol. The protocol is a voluntary agreement that a state can enter into with the International Atomic Energy Agency; it gives IAEA inspectors access to sites and facilities that support a country’s nuclear program but do not house nuclear materials. The following are responses from Iranian officials to U.S. moves to jumpstart diplomacy.

Remarks on Feb. 22, 2021: "The Parliament passed a law regarding the nuclear issue and the administration welcomed it. God willing, tomorrow another part of this legislation will be implemented. This law, which is good, should be executed precisely." 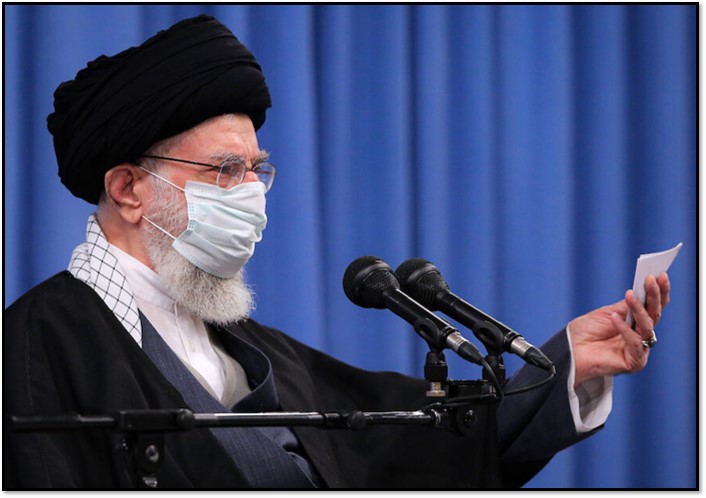 "We are not after nuclear weapons. This is based on Islamic fundamentals and commands that prohibit weapons that are used for killing ordinary people. The one that massacres 220,000 people with nuclear weapons is the U.S."

"Over the past few days, the U.S. and the three European countries have used arrogant, unjust rhetoric regarding Iran. They keep asking why Iran has stopped carrying out its JCPOA commitments, but they don't mention that they never carried out their own commitments."

"Iran is not after nuclear weapons, but its nuclear enrichment will not be limited to 20 percent either. It will enrich uranium to any extent that is necessary for the country. Iran's enrichment level may reach 60 percent to meet the country's needs."

Obliged by law, we halted voluntary implementation of Add'l Protocol.

Fully compatible with JCPOA ¶36 since:
-@POTUS has yet to cease US violation
-E3 continue to fail to meet obligations

Interview with Press TV on Feb. 21, 2021: “Nothing has changed. Biden claims that Trump's policy of maximum pressure was maximum failure... But for all practical purposes, they are pursuing the same policy.”

“The U.S. is addicted to sanctions, bullying, and pressure. But it doesn’t work for a country with millennia of history. We have had a global empire that lasted longer than the United States’ history.”

“Therefore, with Iran pressure does not work, and ‘maximum pressure,’ in their own words, has led to ‘maximum failure.”

The Americans have to “open their eyes, make a sober assessment of the past, not only with Trump, and realize that with this country only respect works.”

“Trump left the [nuclear] agreement hoping that Iran’s government would crumble. Now, he’s gone, and we’re still here,” he said. “I think that’s a good lesson. Seven consecutive US presidents are gone. Every one of them wanted to get us out. All of them are out. We’re still here.”

“All the sanctions must be removed; the United States must gain reentry to the JCPOA. It’s not automatic; it’s not a revolving door.”

There is a path forward, with a logical sequence:#CommitActMeet

As the offending side, US must take corrective measures:
-commit to JCPOA
-effectively fulfill obligations

Iran would reciprocate immediately by reversing its remedial measures.https://t.co/UkREG8n9Ph

US acknowledged Pompeo's claims re Res. 2231 had no legal validity.

US unconditionally & effectively lift all sanctions imposed, re-imposed or re-labeled by Trump.

We will then immediately reverse all remedial measures.

In a cabinet meeting on March 3, 2021: “If we delay the lifting of the sanctions even for an hour, we have violated the rights of the people, and the most important public right is that the sanctions must be lifted and we should all work for this goal.”

“If there is a serious will on the part of the parties, especially the United States, and they fulfil all their obligations and lift the sanctions, Iran will immediately fulfil its obligations.”

“We emphasize to the Europeans that we must maintain the JCPOA, and of course this cannot be done with speeches and slogans, and it is necessary to take practical action.”

“I have emphasized to the European leaders that today the P4+1 has a heavy responsibility and they should know that we are the ones who remained in the JCPOA during the three years of economic war, so they should stop the sanctions and enforce the law.”

In remarks on March 1, 2021: “I am confident that the United States will finally have to kneel down before the Iranian nation and abandon its sanctions.”

“It is our biggest success in history that, as a result of the Iranian nation’s resilience, they admitted their pressure and sanctions have been futile.”

In an interview with Iranian state television on Feb. 20, 2021: “We are studying [E.U. foreign policy chief] Josep Borrell’s proposal to hold an informal meeting of the 4 + 1 [Britain, China, France, Germany and Russia] with the United States and Iran, and we are consulting with our partners, including Russia and China, and we will respond to this proposal in the future.”

“However, we believe a U.S. return to the nuclear accord does not require a meeting and the only way for it is to lift the sanctions.”

Remarks on March 3, 2021: “We have no bilateral talks with the United States, and unless the U.S. corrects its wrong path, there will be no change in Iran’s policies. Look, up to now, almost two months since the Biden administration took office, they have not officially declared their return to the JCPOA, even verbally. This is a historic shame for Mr. Biden, who had set up his presidential campaign in a different way. But in practice, we are seeing a different administration. Nice words have been uttered sporadically here and there, and we have heard these words, but we want action and don’t base our policies on words. In other words, we will reciprocate the other side’s action proportionately. It’s bitter that the JCPOA is being put on the verge of collapse by the U.S. administration and the same people who negotiated it. A historic responsibility will fall on their shoulders, and history will not forget.”

“It is the U.S. that, as the violator of the JCPOA, must return to its commitments if it wants to return to the negotiating table.”

In remarks to the press on Feb. 28, 2021: “There has been no change in America’s positions and actions.”

“The Biden administration has not set aside Trump’s maximum pressure policy, nor has it announced its commitments.”

Given the recent moves and positions of the U.S. and the three European countries, the Islamic Republic doesn’t assess the timing of an informal meeting proposed by the EU coordinator as appropriate.”

“The path ahead is very clear: The U.S. should end its illegal and unilateral sanctions and return to its JCPOA [Joint Comprehensive Plan of Action] commitments.”

“The Islamic Republic of Iran will respond to actions with action, and just as it will return to its JCPOA commitments with the removal of sanctions, it will also answer in kind to all hostile measures and behaviors.”

In remarks to the press on Feb. 21, 2021: “This news is not true as stated and there is no direct dialogue between Iran and the United States in any field.”

“Our priority is the release of Iranian prisoners in the United States.”

[Khatibizadeh was responding to White House National Security Advisor Jake Sullivan, who earlier that day had said the Washington had been in contact with Tehran about American detainees in Iran. Iran said communications had gone through the Swiss, who represent U.S. interests in Tehran.]

Reminder: Because of US withdrawal from JCPOA, there is NO P5+1.

Remember, Trump left the room and tried to blow it up.

Gestures are fine. But to revive P5+1, US must Act: LIFT sanctions.

Here is the key sequence: #CommitActMeet

Remarks to the press on Feb. 20, 2021: “We predict with confidence that diplomatic initiatives will result in a favorable outcome despite the diplomatic wrangling, which are a natural prelude to the return of the parties to their commitments, including the lifting of all sanctions in the near future.”

Remarks to reporters on Feb. 22, 2021: “Our position is that all JCPOA sanctions, plus the 1,600 sanctions imposed by the Trump administration, whether under the name of nuclear, human rights, or any other name, should be lifted.”

Statement on Feb. 22, 2021: Iran’s foreign policy is based on “constructive interaction” with the world. “However, renegotiating an already agreed issue with America is the redline of the establishment and we consider talks on our defense and missile issues non-negotiable.”

“The global arrogance knows that the return or non-return of the United States to the JCPOA has no effect on the resistance of the honorable people of Iran, and their return to the JCPOA without the practical lifting of sanctions is not beneficial, but harmful.”

Address to the U.N.-sponsored Conference on Disarmament on Feb. 23, 2021: “The onus is on the offending party to return, restart and compensate for the damages as well as to reassure that they would not renege again.”

“There is a path forward with a logical sequence as [Foreign] Minister Zarif recently outlined.”