Iran produced at least one of the drones used in the deadly attack on the Mercer Street – a Liberian-flagged oil tanker with ties to Israel – on July 29 and 30, according to U.S. Central Command (CENTCOM). CENTCOM released the findings of its investigation into the drone attack and published photos of debris recovered from the tanker. Forensic analysis confirmed that the drone's components were identical to Iranian unmanned aerial vehicles (UAVs) and that it was loaded with explosives.

On July 29, two kamikaze drones were launched at the Mercer Street while it was floating off the coast of Oman. The drones missed their target and landed in the water. On July 30, a third drone carrying a “military-grade” explosive “rigged to cause injury and destruction” struck the tanker, CENTCOM reported. It created a six-foot diameter hole and damaged the ship interior. Two crewmembers, a Romanian national and a British national, were killed in the attack. The second attack “required calculated and deliberate retargeting” by Iran.

On July 31, a team of explosive experts from the USS Ronald Reagan, an aircraft carrier in the Persian Gulf supporting the U.S. military withdrawal from Afghanistan, boarded the Mercer Street to investigate the attack. They recovered pieces of the third drone, including a part of the wing and internal components. The tanker itself was “within the range of documented Iranian one-way attack UAVs,” U.S. Navy Capt. Bill Urban, the CENTCOM spokesman, said in a statement. The parts were transferred to the Fifth Fleet headquarters in Bahrain and later to a U.S. national laboratory for testing and verification. 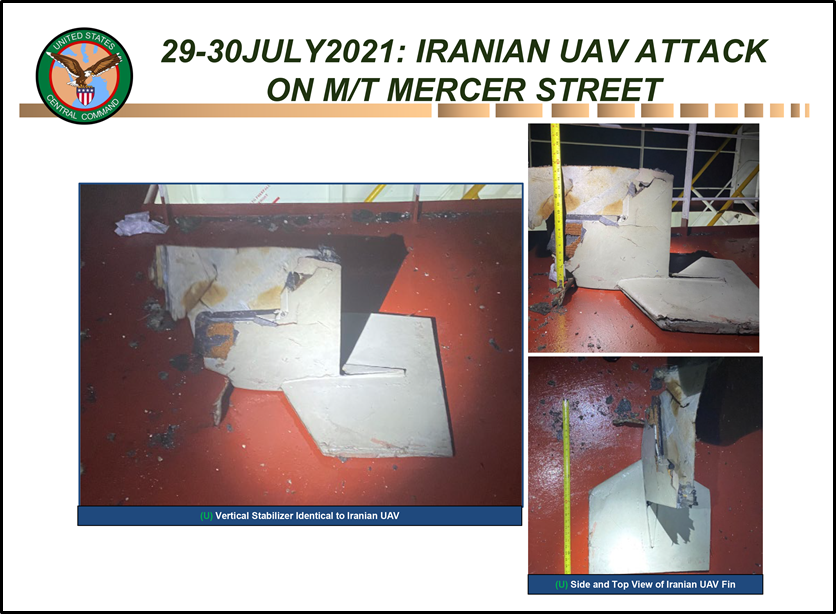 CENTCOM compared, in its report released on August 6, the drone used in the attack to similar “delta-wing” drones – aircraft with wings shaped like a triangle – previously displayed by Iran. The U.S. military published photos showing Iranian delta-wing drones on display an Iranian airshow in May 2014, recovered from an attack against on Saudi Arabia in May 2019, recovered from a crash in Yemen in September 2020, and in flight tests in January 2021 and May 2021.

The Mercer Street was owned by a Japanese company and flew the Liberian flag, but was managed by Zodiac Maritime, a company headed by an Israeli shipping magnate. The Mercer Street was the second vessel connected to Zodiac Maritime to be attacked in a month. On July 3, the CSAV Tyndall, previously owned by Zodiac Maritime, was struck by either a missile or a drone in the Indian Ocean while sailing from Saudi Arabia to the United Arab Emirates. No one was hurt, but the ship suffered minor damage. Israeli security officials reportedly tied Iran to the attack. 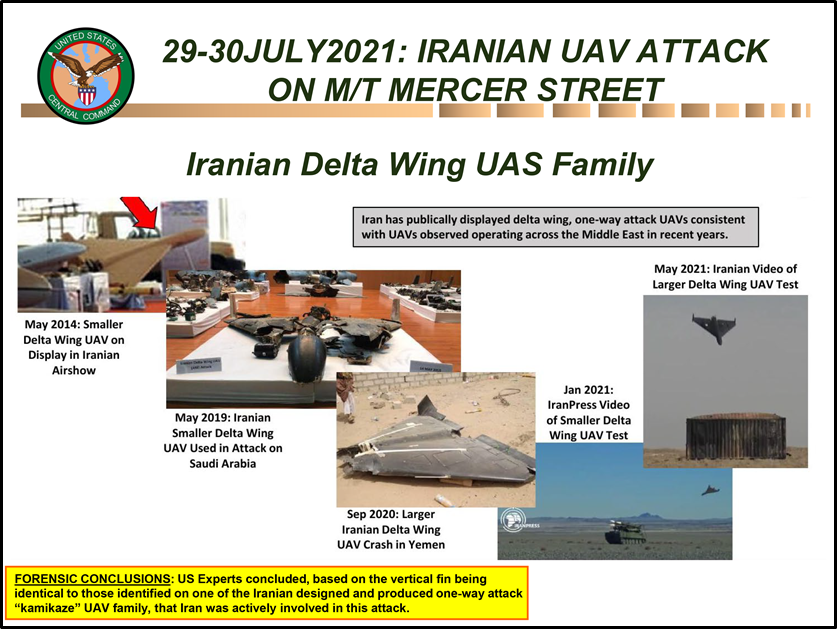 Since 2019, Israel and Iran have reportedly engaged in tit-for-tat attacks on ships owned by or linked to each other. The strike on the Mercer Street was reportedly the first fatal incident. On August 1, U.S., British and Israeli officials charged that Iran was behind the attack on the Mercer Street. Iran denied involvement. On August 6, the foreign ministers of the G7 – the world’s most powerful democracies – condemned Iran for the attack. “All available evidence clearly points to Iran,” they said in a statement. “There is no justification for this attack.” The following is CENTCOM’s statement from the investigation into the Mercer Street drone attack.

“Following the July 30, explosive unmanned aerial vehicle attack on the Motor Tanker (M/T) Mercer Street while transiting international waters off the coast of Oman, an expert explosive investigative team from the USS Ronald Reagan embarked the M/T to examine the evidence and interview the surviving crew members.

“1) The M/T Mercer Street was targeted by two unsuccessful explosive UAV attacks on the evening of July 29. The crew reported the attacks via distress calls on the evening of July 29. Based on crew interviews, the investigative team found credible the reports of the attacks, which impacted the sea near the M/T Mercer Street.  Investigators found small remnants of at least one of the UAVs on Mercer Street that the crew had retrieved from the water, corroborating the reports.

“2) The investigative team determined that the extensive damage to the Mercer Street, documented in the attached slides, was the result of a third UAV attack on July 30.  This UAV was loaded with a military-grade explosive, and caused the death of two crewmembers; the master of the ship, a Romanian citizen, and a United Kingdom national who was part of the security detail.

“3) The explosive detonation following the UAV impact created an approximately 6-foot diameter hole in the topside of the pilot house and badly damaged the interior. Explosive chemical tests were indicative of a Nitrate-based explosive and identified as RDX, indicating the UAV had been rigged to cause injury and destruction.

“4) Explosives experts were able to recover several pieces of this third UAV, including a vertical stabilizer (part of the wing) and internal components which were nearly identical to previously-collected examples from Iranian one-way attack UAVs. The distance from the Iranian coast to the locations of the attacks was within the range of documented Iranian one-way attack UAVs. Following an on-scene analysis, some of the material was transferred to U.S. Fifth Fleet headquarters in Manama, Bahrain and subsequently to a U.S. national laboratory for further testing and verification.

“5) U.K. explosive experts were provided access to the evidence at the Fifth Fleet headquarters. Evidence was shared virtually with Israeli explosive experts. Both partners concurred with the U.S. findings.

“U.S. experts concluded based on the evidence that this UAV was produced in Iran.”

Photo Credit: All photos via Department of Defense (public domain)