Iran’s economy grew by 1.5 percent in fiscal year 2020-2021, despite historically low oil prices, crippling U.S. sanctions and the COVID-19 pandemic, the International Monetary Fund (IMF) reported in April 2021. Iran’s economic growth outperformed most of its neighbors. The economies of Iraq, Saudi Arabia, the United Arab Emirates, Kuwait, Qatar and Oman – oil-exporting countries also on the Persian Gulf – all contracted in 2020, according to the IMF. Only Egypt and Turkey experienced positive growth in 2020. Iran’s economy was projected to continue growing in 2021 and 2022 but potentially at a slower rate than its neighbors. The IMF calculated the fiscal year starting in March 2020 and ending in March 2021. 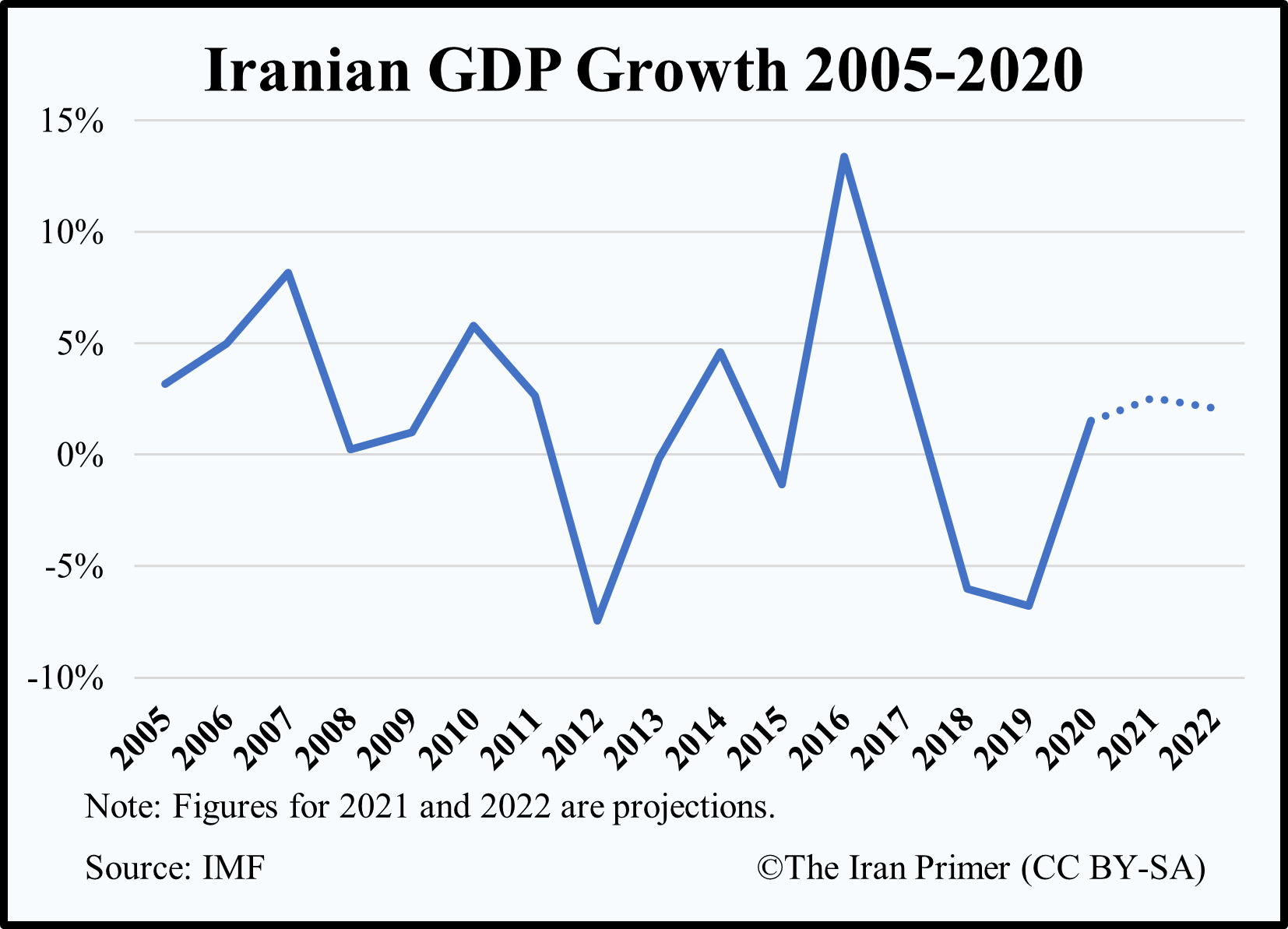 In 2020, the IMF had initially predicted that the Islamic Republic would experience a recession and that the economy would contract by 6.0 percent, partly because oil prices gyrated. Iranian oil sold for at least $44 per barrel in February 2020. In March, the price fell to $14.93 per barrel due to a decline in demand for fuel after countries around the world ordered lockdowns due to the pandemic and industries and travel businesses dependent on oil shuttered. By April 21, Iranian crude was selling for only $11.51, the drop compounded by a shortage of space to store excess oil. In the second half of 2020, however, global oil prices recovered. By August, the price of Iranian heavy crude was hovering around $40 per barrel, close to pre-pandemic prices.

In the second half of 2020, growth was largely driven by manufacturing goods and cars as well as oil and gas. Oil exports doubled between August and September 2020, TankerTrackers reported. In the fourth quarter of 2020, the oil and gas sector grew by 4.9 percent, while manufacturing grew by 3.1 percent, according to the Statistical Center of Iran. “We set the highest record of exports of refined products in the history of the oil industry,” Oil Minister Bijan Zanganeh claimed in January 2021. The following are data from the IMF World Economic Outlook report.

For a decade, the rate of inflation often correlated to sanctions. Inflation soared between 2010 and 2013, when Iran was under pressure from U.S., European and U.N. sanctions, according to IMF data. It rose to 35 percent in 2013. After the Iran nuclear deal was implemented, inflation dropped to about nine percent. It rose again after the Trump administration reimposed sanctions in 2018. In mid-2020, the prices of imported goods increased, partly because borders were closed during the pandemic, which contributed to inflation. The cost of domestic production also increased due to U.S. sanctions, which increased the price of raw materials. Inflation rose to 36.5 percent in 2020. 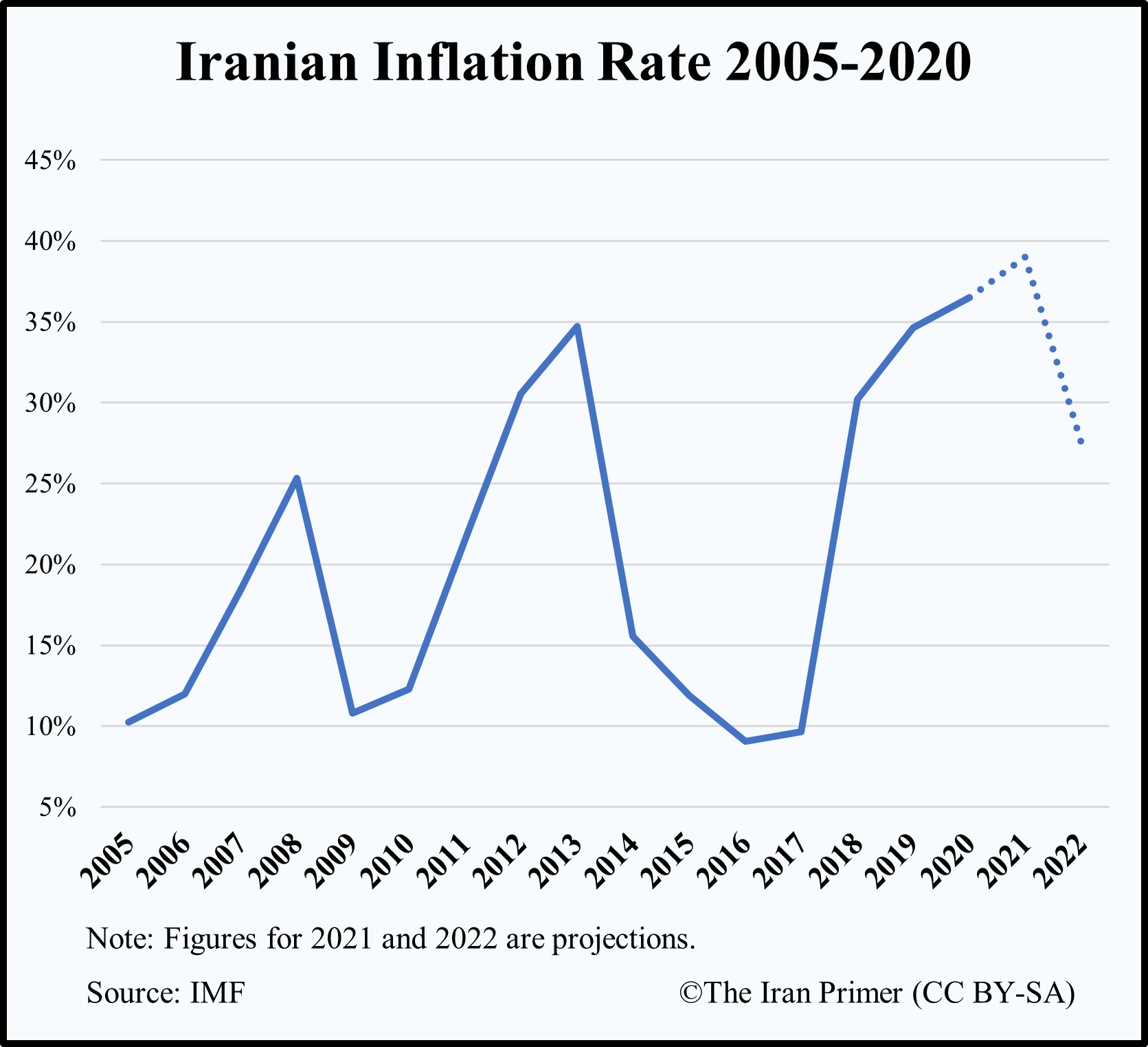 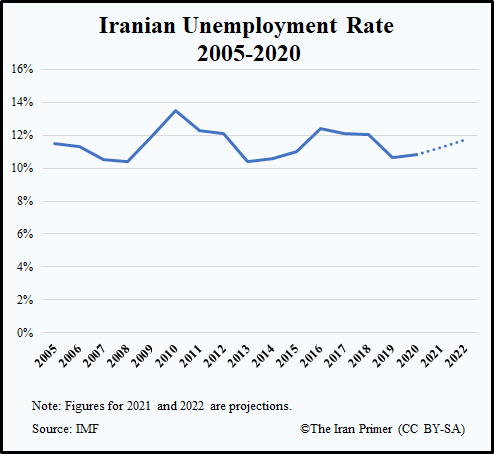