On September 19, Secretary of State Mike Pompeo announced that the United States had reimposed U.N. sanctions on Iran that had been lifted as part of the 2015 nuclear deal, known as the Joint Comprehensive Plan of Action (JCPOA). The five other major powers that signed the original agreement – Britain, China, France, Germany and Russia – rejected the Trump administration’s decision to invoke so-called snapback sanctions.

In a joint statement, the foreign ministers of Britain, France and Germany said the U.S. effort was “incapable of having legal effect” because the Trump administration withdrew from the deal on May 8, 2018. “The United States certainly understands that its assertions are at odds with reality,” said the Russian foreign ministry in a statement. “It is for this reason that the U.S. threatens all the dissenting voices with sanctions and other penalties, just as it always does. It seems that the US foreign policy has run out of any other arguments.” China’s ambassador the U.N. also said the United States lacked the standing to reimpose multilateral sanctions. The following are reactions by major powers to the U.S. move.

Joint statement by the foreign ministers of Britain, France and Germany on September 20: “Today marks 30 days since the US sought to initiate the ‘snapback mechanism’, which allows a participant to the JCPoA to seek the re-imposition of the multilateral sanctions against Iran lifted in 2015 in accordance with resolution 2231, adopted by the UN Security Council.

“France, Germany and the United Kingdom (“the E3”) note that the US ceased to be a participant to the JCPoA following their withdrawal from the deal on 8 May, 2018. Consequently, the purported notification under paragraph 11 of UNSCR 2231 (2015), received from the United States of America and circulated to the UN Security Council Members, is incapable of having legal effect. It flows from this that any decisions and actions which would be taken based on this procedure or on its possible outcome would also be incapable of having any legal effect.

“We remain guided by the objective of upholding the authority and integrity of the United Nations Security Council. The E3 remains committed to fully implementing UNSCR 2231 (2015) by which the JCPoA was endorsed in 2015. We have worked tirelessly to preserve the nuclear agreement and remain committed to do so.”

Joint letter by the British, French and German representatives to the United Nations on September 18: 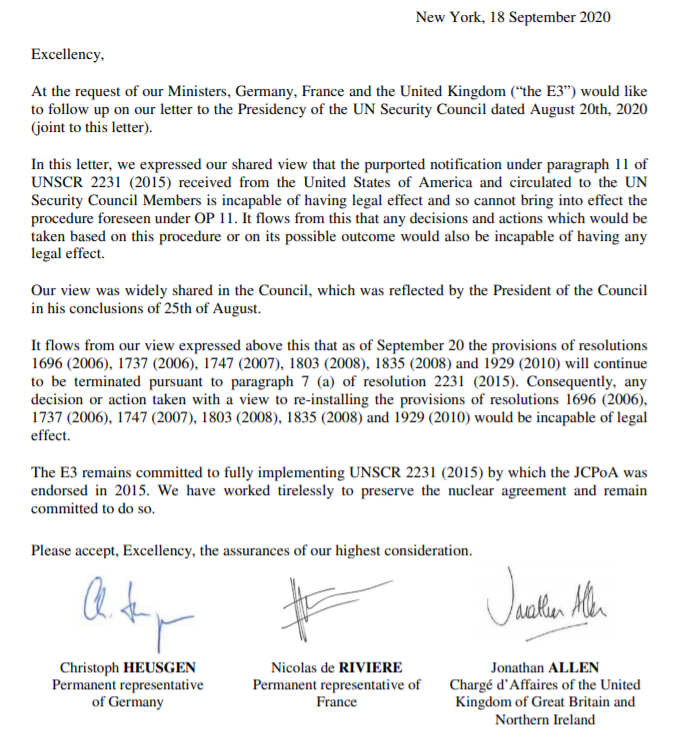 Ministry of Foreign Affairs of the Russian Federation statement on September 20: “The United States continues to mislead the international community by speculating that the UN Security Council has completed procedures to restore the UN Security Council sanctions resolutions on Iran that were terminated after the signing of the Joint Comprehensive Plan of Action on the Iranian nuclear programme (JCPOA) in 2015.

❗ The @UN Security Council has not taken any action to reinstate the foregone #sanctions on #Iran. We hope that our #US colleagues will have the courage to finally look the truth in the eye and stop speaking on behalf of the Security Council. https://t.co/i17PMLZz4l pic.twitter.com/LZb60xaR31

“The United States certainly understands that its assertions are at odds with reality. It is for this reason that the US threatens all the dissenting voices with sanctions and other penalties, just as it always does. It seems that the US foreign policy has run out of any other arguments.

“In fact, the UN Security Council has not taken any action to reinstate the foregone sanctions on Iran. Washington’s moves boil down to dramatic posturing for the sake of subjecting the Security Council to its maximum pressure campaign on Iran and turning this respected institution into a tool at its disposal. This did not work.

“The United States is fully aware of the fact that by withdrawing from the “nuclear deal” in May 2018, restoring unilateral sanctions on Tehran and by seeking to undermine efforts by other countries to follow UN Security Council Resolution 2231, the US cast aside the international norms set forth in the corresponding UN Security Council decisions and the UN Charter. Now Washington is trying to force others to put on augmented reality headsets with a “made in USA” label in order to view the developments around Iran and the JCPOA through this prism. However, the world is not an American video game.

“By engaging in this unbridled behaviour that runs counter to the JCPOA and UN Security Council Resolution 2231, the US is dealing a severe blow to the UN Security Council, and openly ignores its decisions and the international law in general. This is unacceptable not only for Russia, but for other Security Council members as well. It is not surprising that the American side has failed in its gamble to re-impose the previously terminated UN Security Council sanctions against the Islamic Republic of Iran.

“Back in August, an overwhelming majority of UN Security Council members stated their position clearly. They pointed out that the US aspirations were null and void from both the legal and procedural perspectives. In particular, they noted that the letter from US Secretary of State Mike Pompeo dated August 20, on which Washington relies, cannot be viewed as a “notification” within the meaning of UN Security Council Resolution 2231 to launch the process leading to the restoration of the previous sanctions. The open debate on August 25 led to the conclusion that the Security Council was not in a position to take further action based on the US application. The council reaffirmed this position in September. Russia fully shares this view.

“Claiming that the provisions of the resolutions imposing sanctions on Iran have now been reinstated is wishful thinking. We hope that our US colleagues will have the courage to finally look the truth in the eye and stop speaking on behalf of the UN Security Council. The illegitimate actions by the US cannot have any effect in terms of international law on other countries or bind them to curtail their legal cooperation with Iran.

“Efforts to preserve and ensure a steady implementation of the JCPOA will carry on. The UN Security Council Resolution 2231 remains in force, unaltered, and the commitments arising from it have to be fulfilled as originally agreed by all states based on the principle of reciprocity.

“Instead of aggravating the situation, the United States should immediately renounce its course to dismantle the JCPOA and undermine UN Security Council Resolution 2231.”

Russian Representative to International Organizations in Vienna Mikhail Ulyanov in a tweet on September 20:

US is extremely irritated by the fact that practically nobody stands ready to recognise it as a #JCPOA participant capable to trigger snapback. There is noting to complain about. This is an obvious case of miscalculation caused by enormous role of ideology in #US foreign policy.

US seems to be persistent in undermining intl law by imposing its selfish will on the others. Is it the “rules based intl order” where rules are set by limited club of nations that our American colleagues have been ardently defending recently? #snapback #Iran

Another clear proof that US despises intl law and multilateral system of which UN is a cornerstone. Washington would rather pursue its self-attributed role of “world sheriff” imposing justice in its selfish understanding. Pathetic hypocricy discreditable for a great power! 👎🏻 https://t.co/uTehVmazaM

Letter to the United Nations from Russia's U.N. Ambassador Vassily Nebenzia on September 20:

Our letter to #UNSC President and Secrerary-General on latest US announcement on alleged #snapback. Clear position: there is no return of UN Sanctions on #Iran pic.twitter.com/BunM7arwYZ

Press Statement from China’s U.N. Mission on September 20: “On 20 September 2020, Ambassador Zhang Jun wrote a letter to the President of the Security Council and Secretary-General of the UN, expressing opposition to the US unilateral announcement on the return of UN sanctions on Iran on September 19.

“In his letter, Ambassador Zhang Jun said that the US unilaterally withdrew from the JCPOA in May 2018, and is no longer a JCPOA participant. Therefore, it is illegitimate for the US to demand the Security Council invoke the snapback mechanism. In response to the US letter dated 20 August 2020, 13 members of the Security Council wrote to the President of the Council and clearly stated that any decision or action resulting from the US letter is devoid of any legal, political or practical effect. Their view was also reflected by the President in his conclusion on August 25.

Ministry of Foreign Affairs of China on September 21: