Iranian Media on the U.S. Election

In Iran, both hardline and reformist media have provided extensive coverage of the U.S. presidential election but from widely divergent viewpoints. How America votes could have sweeping military, diplomatic and economic impact on the Islamic Republic over the next four years, especially because the two candidates have disparate positions on what the United States should do to contain Tehran’s nuclear program. “Who is better for Iran: Joe Biden or Donald Trump?” read a front-page headline in Ebtekar, a centrist newspaper, on September 23. President Trump withdrew from the 2015 nuclear deal and reimposed economic sanctions in 2018 to squeeze Iran into a broader agreement restricting its missile program, support for militant groups and influence in the Middle East. Former Vice President Biden supported the accord—brokered by the world’s six major powers during the Obama administration—and has pledged to return to it.

In their coverage, conservative and hardline papers sowed doubt about the integrity of the U.S. vote and devoted space to Trump’s claim that there could be widespread fraud in the mail-in voting. Javan, a hardline paper, quoted Trump’s warning in August that “the only way we’re going to lose this election is if the election is rigged.” Hardline papers also speculated that the Supreme Court would rule in Trump’s favor if the outcome was disputed. “He knows that if he’s to bring his dispute with Biden to the Supreme Court, his victory is certain given the high presence of Republicans on the court,” Vatan-e Emrooz reported on September 26.

In editorials, the conservative newspapers reported that the world had lost faith in the U.S. form of democracy. “The message that is being conveyed to the world today from the Democrats and Republicans is the same: the world power, America, is not even capable of holding a sound election,” Vatan-e Emrooz, a conservative paper, reported on August 19. American voters had also lost faith in the vote, papers reported. “New polls show that the American people also do not have confidence in free and fair elections in their country,” Kayhan, a hardline paper, reported on September 21.

Centrist publications focused on Biden’s promised return to steadier diplomacy. “What may make Biden’s victory important for us Iranians, more than anything, is that U.S. policy will become more predictable,” Ebtekar, a centrist newspaper, reported on September 23.

Reformist papers expressed hope that a Biden victory would improve U.S.-Iran relations. “The Democratic presidential candidate claimed that if Iran resumes its commitments, the United States will return” to the nuclear deal, Mardom Salari, a reformist paper, reported on September 12.

Both reformist and centrist media gave Biden the edge after the first presidential debate on September 29. “Based on polls, this debate ended in Biden's favor, but supporters of Trump believe that there is a way to overtake Biden,” Sazandegi, a centrist paper, reported on October 1. The following are selected frontpages from Iranian newspapers.

Biden: I'll Return to the JCPOA
Trump: I'll Make a Deal with Iran in the Span of One Month 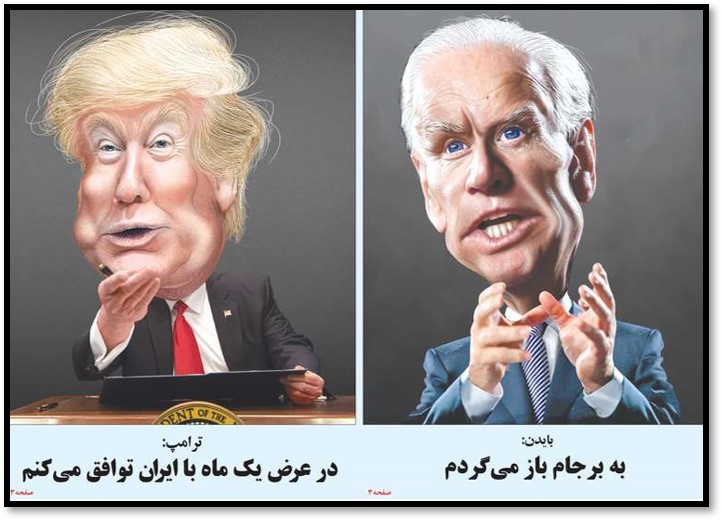 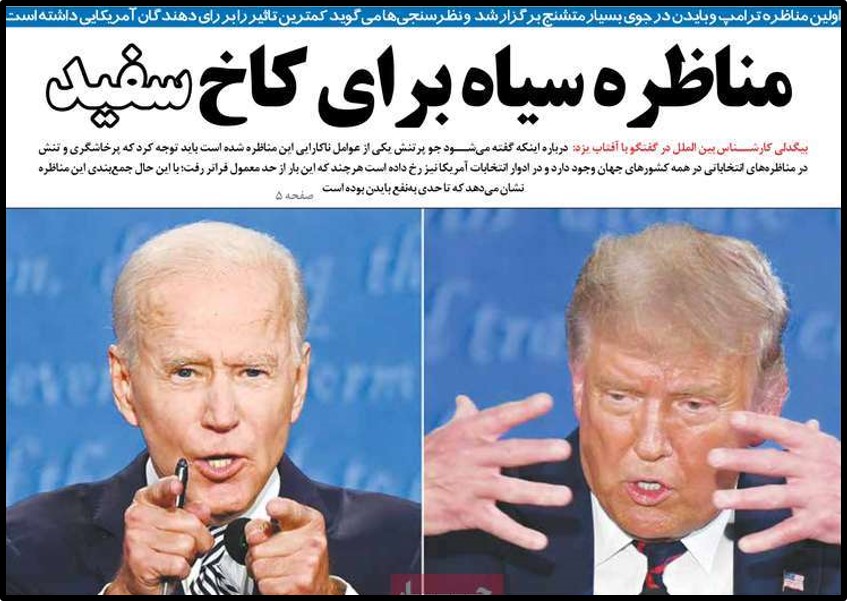 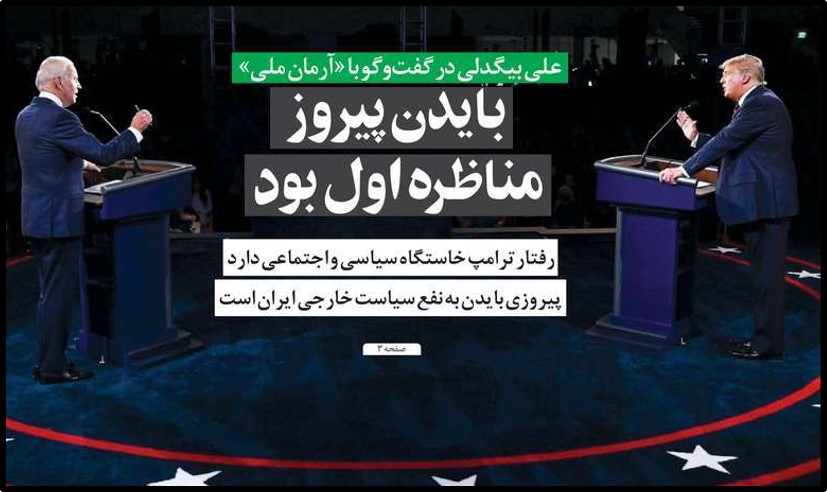 Angry and Wild
Trump and Biden got into a fight in the first debate. Biden told Trump: "Will you shut up, man?" The results of a CNN poll show that 6 out of every 10 viewers of the Tuesday night U.S. presidential debate said that Biden had the best performance in this match. Only 28 percent had this opinion about Trump. 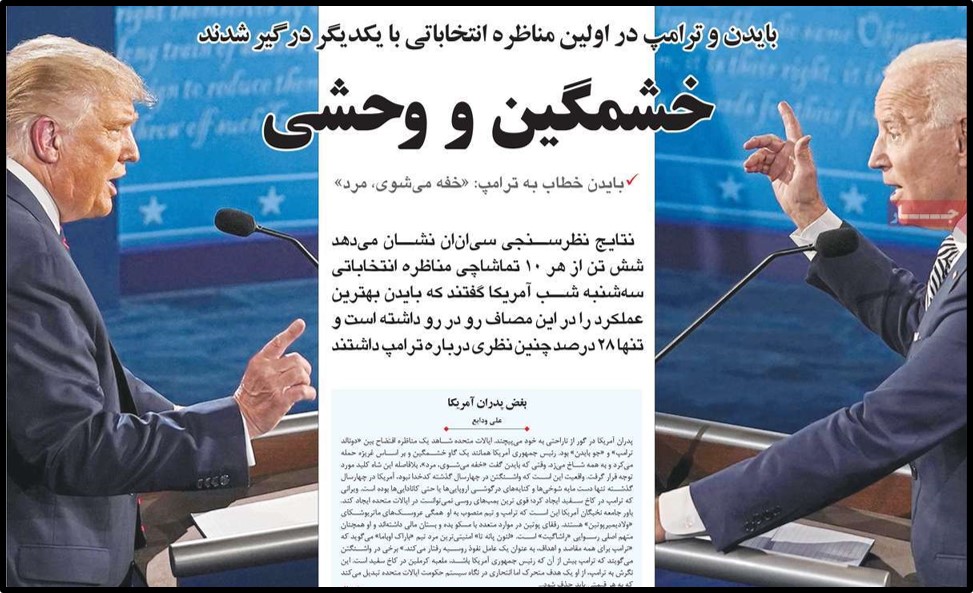 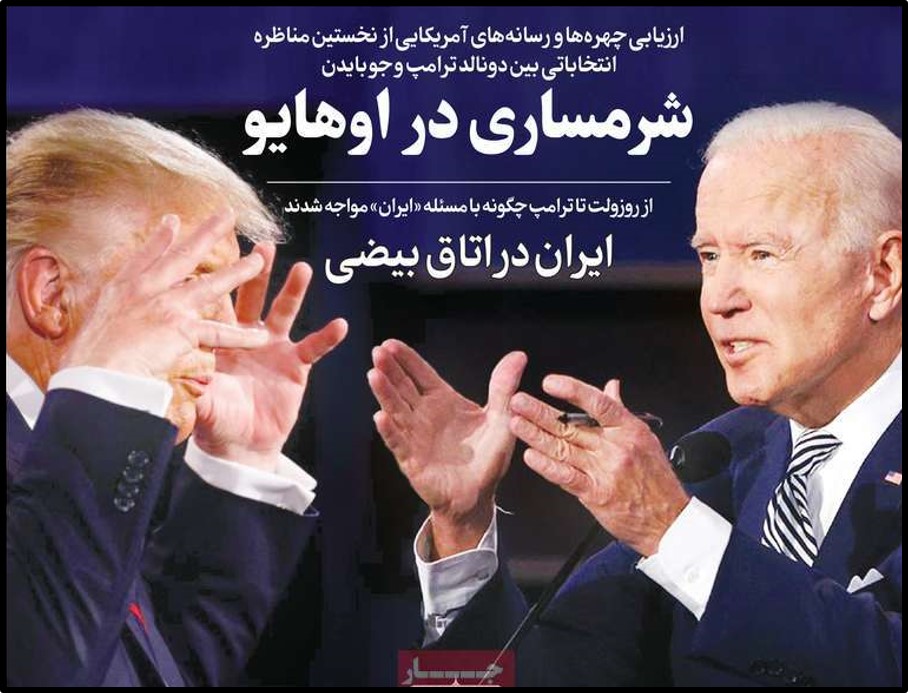 War of the Polls for the Elections
Trump is behind but it's not a definite defeat. 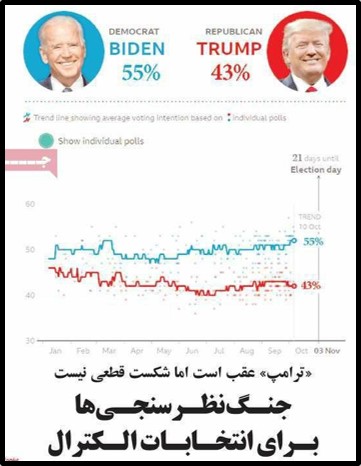 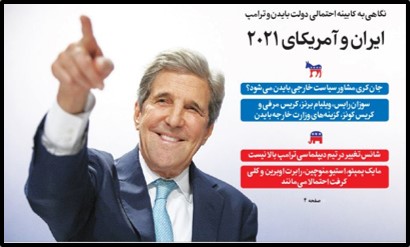 Who is Better for Iran: Joe Biden or Donald Trump?

Fight Club
The first debate between Trump and Biden, the two main nominees for the U.S. presidential election, took place in an atmosphere full of commotion and accusations against each other. Based on polls, this debate ended in Biden's favor, but supporters of Trump believe that there is a way to overtake Biden. 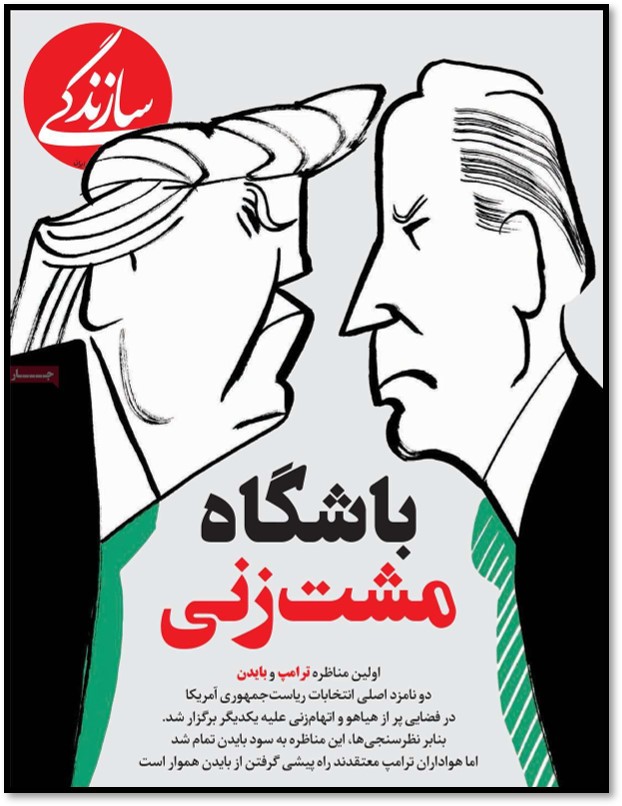 Debate Deadlock in America
Debates in the U.S. have taken on new dimensions. 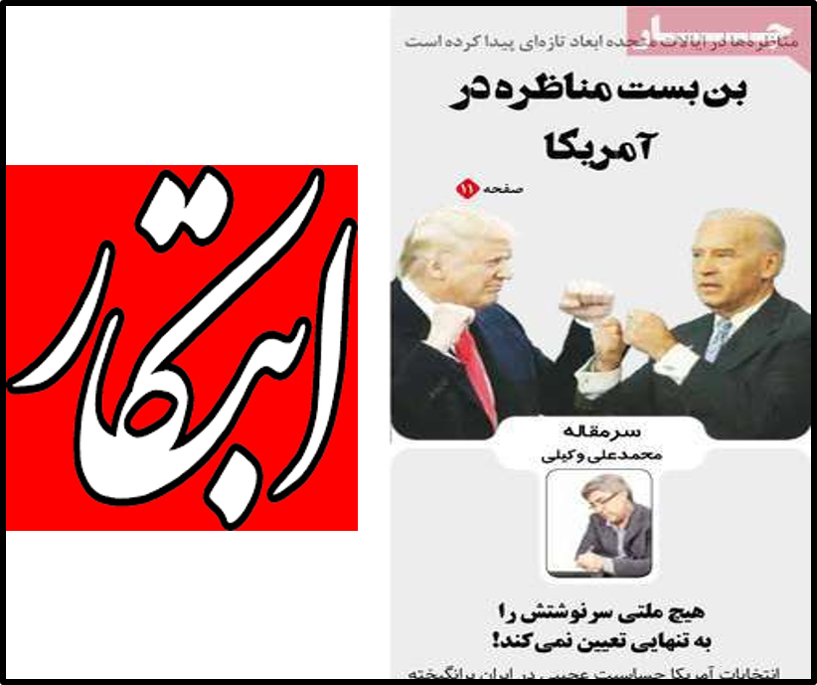 Democrats: If Trump Intends to Cheat, Pour Into the Streets
Trump: The Only Way I Would Lose is Fraud!
With less than three months before the U.S. elections, the two sides, by accusing each other of fraud, paint a scene of instability in the country. 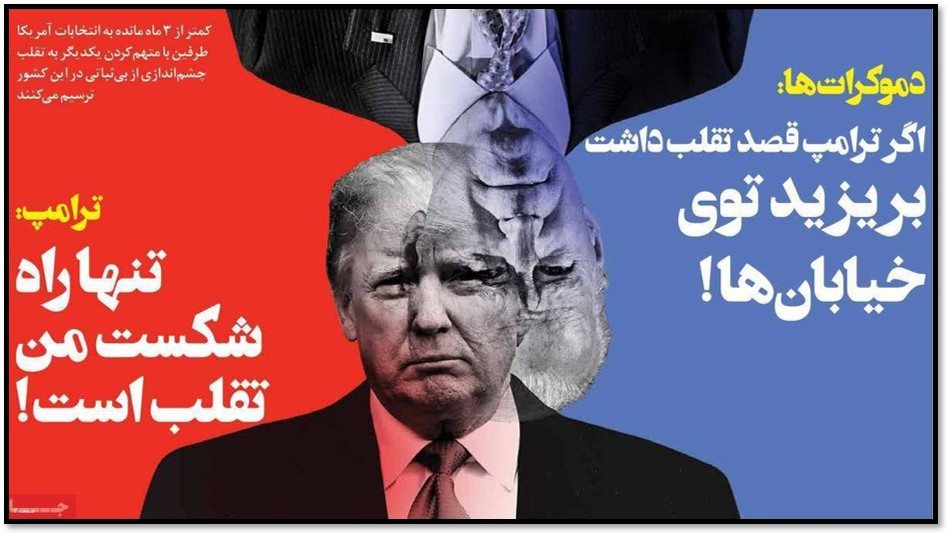 Trump: If I'm Not Re-Elected, It's Been Rigged
Asked if he would resort to fraud to win the presidential election, the U.S. president himself questioned the electoral process, saying that if he loses in November, it's been rigged. 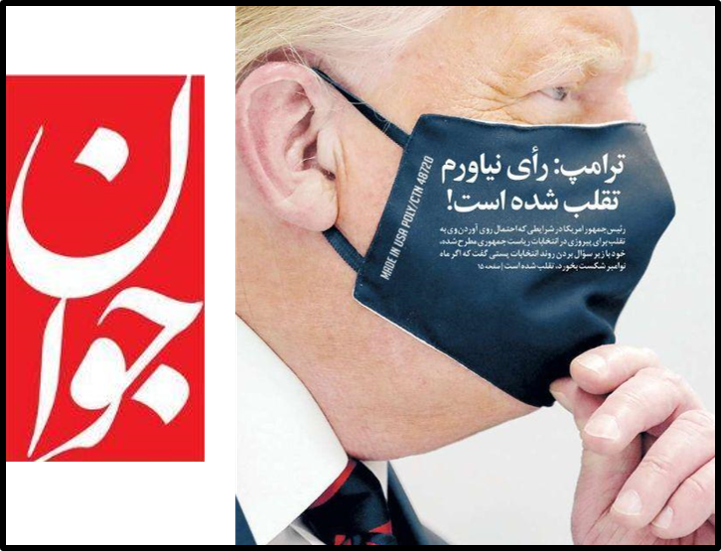 Trump: There Will Be No Power Transition
In response to a question about his commitment to a peaceful transition of power if he loses the election.

Don't Continue the Debates
America's Reputation was Ruined
The first debate between Donald Trump and Joe Biden turned out to be a complete disgrace for the United States because both sides applied the worst language and insulted each other. 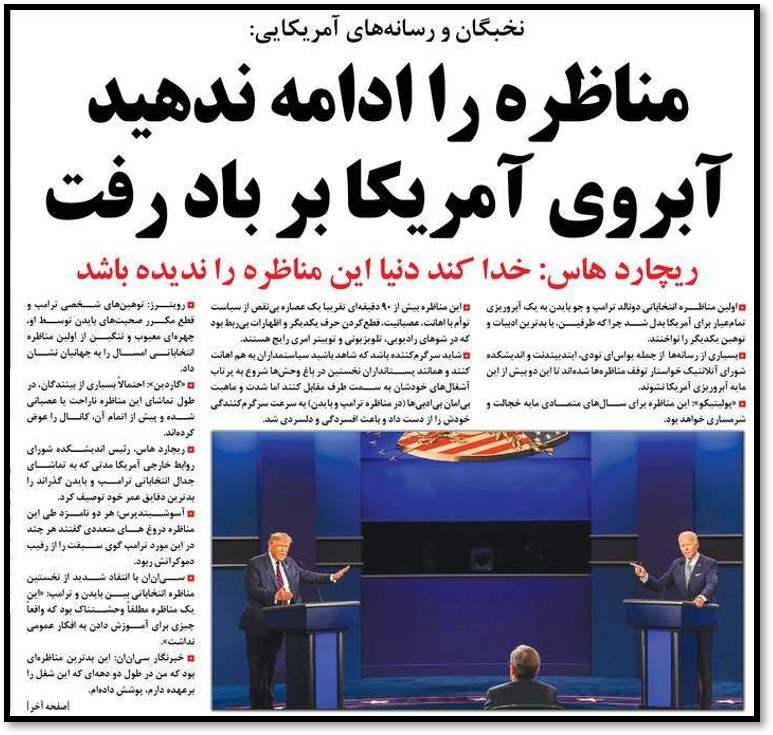 Delirium
Trump's new sanctions and insults against Iran are signs of turmoil in his election campaign. Trump falls in the polls after the Pence-Harris debate. 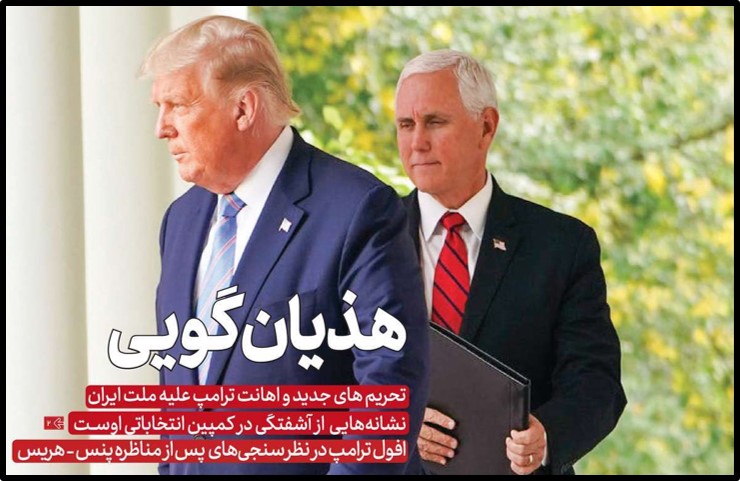 Be Ready for a Civil War in America
The prime minister of Canada announced that the country is preparing itself for a possible U.S. civil war. On the other hand, there was a plot to kidnap Ms. Whitmer, the governor of Michigan, who has a large role in the elections for the Democrats. The fire of an electoral war in the U.S. has been ignited. 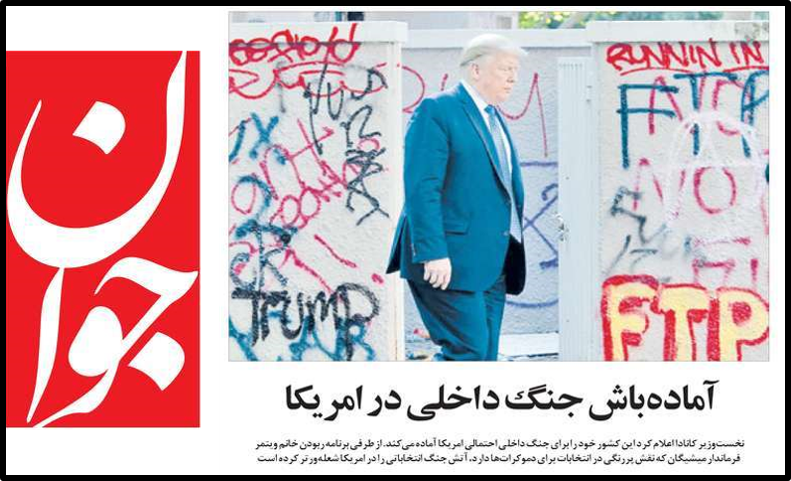 Committee for the Protection of Votes
The Trump campaign intends to enlist 50,000 observers from across America to combat electoral fraud.​ 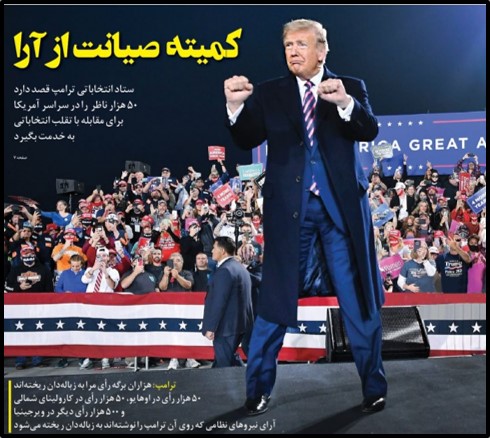