Pompeo in Israel on Iran

On May 13, Secretary of State Mike Pompeo warned that Iran would “foment terror” while the rest of the world grappled with the COVID-19 pandemic. Pompeo blasted the Islamic Republic during a visit to Jerusalem, his first trip abroad since he visited Afghanistan in March. “Even during this pandemic, the Iranians are using the ayatollah regime’s resources to foment terror across the world, even when the people of Iran are struggling so mightily,” he said. Israeli Prime Minister Benjamin Netanyahu praised the Trump administration for its maximum pressure campaign against Tehran, including its push to extend the U.N. arms embargo due to expire in October. 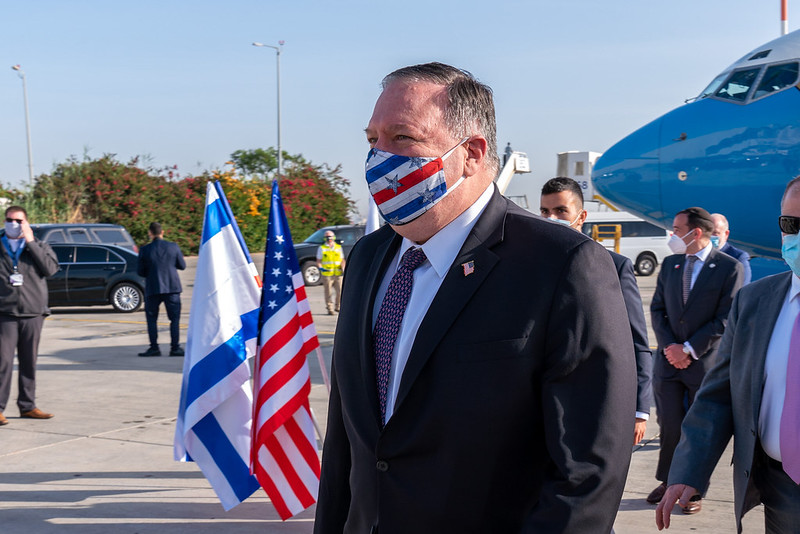 Pompeo’s visit followed reports in the Israeli media that Iran has reduced its military presence in Syria because of economic challenges and Israel’s bombing of Iranian assets. On May 8, David Schenker, the Assistant Secretary for Near Eastern Affairs, said Israeli airstrikes on weaponry and equipment had made Iran’s continued presence in Syria “increasingly costly.” Israel has conducted hundreds of airstrikes in Syria since 2012. Pompeo and Netanyahu also discussed Israel’s plan to annex parts of the West Bank and Israel’s relationship with China. The following are excerpted remarks by State Department officials to reporters.

Equally, we have a lot to talk about.  The first thing is the plague.  The corona plague is something that challenges the entire world, our two countries and everyone else, and we’d like to talk about strengthening our cooperation, our partnerships in battling the coronavirus plague.

The second thing is that there’s something else plaguing our region, which is unremitting Iranian aggression and terror, and I want to express my appreciation for the strong position that the President and you and your administration put forward against Iran – first, by withdrawing from the dangerous Iran deal; second, by taking head on t he masters of Iranian terror; third, by going after, continuing the arms embargo against Iran that has not stopped for a minute its aggressive designs and its aggressive actions against Americans, Israelis, and everyone else in the region.  So I want to express our appreciation for that and also discuss how we can continue in our partnership to combat and confront and roll back Iran’s aggression in the Middle East, in Syria, everywhere else.

The third point is that now we’re about to form a national unity government, tomorrow, I am – I think that this is an opportunity to promote peace and security based on the understandings that I reached with President Trump in my last visit in Washington, in January.

And these are all tremendous challenges and opportunities, and we can do them because we have such a – such a powerful bond that makes the alliance between Israel and the United States stand out, certainly for us but I think for many other countries looking around.  There is an unbreakable bond of values and interests that has kept this alliance together but also kept it growing and growing and growing.  It’s never been stronger.

Tomorrow marks 72 years from the president – the recognition of President Truman of the state of Israel, the young state of Israel, and it also marks two years from another historic decision: the recognition of Jerusalem as Israel’s capital by President Trump.  I think that this brackets the tremendous partnership that we have, the friendship that we have, the great sympathies that the people of Israel and the people of America have with one another.  Your trip at this time is a powerful expression of that, and I want to welcome you in this spirit to Jerusalem.  Thank you, Mike.  Welcome.

POMPEO:  Two years ago today we dedicated the embassy in Jerusalem.  It was pretty remarkable.  It seems like a long time ago; much has happened since then and much in our relationship has continued to grow in those 24 months as well, and I want to thank you for that personally in making that happen.  It’s important for America, it’s important for Israel, it’s important for democracies across the world. …

We’ll certainly talk about the challenges the globe faces with COVID – Israeli technologies, Israeli medical expertise, all of the things that you and I and our teams can work on together.  I know we’ll deliver good outcomes and decrease risk for people all across the world from this global pandemic.  You’re a great partner.  You share information, unlike some other countries that try and obfuscate and hide that information, and we’ll talk about that country, too, some. …

Second, we’ll get a chance, too, to talk about the Vision for Peace.  We’re now some months on from the day that you came to Washington when President Trump announced that Vision for Peace when you were there.  There remains work yet to do, and we need to make progress on that.  I’m looking forward to it.

You spoke thoughtfully and candidly about Iran, as you always have.  President Trump has done the same.  The campaign that we have been part of to reduce the resources that the ayatollah has to inflict harm here in Israel and all across the world has borne fruit, it has been successful, and we’re going to stay at it.  There is still work to do on that file as well.  As you talked about, even during this pandemic the Iranians using the ayatollahs’, the regime’s resources to foment terror across the world even when the people of Iran are struggling so mightily tells you a lot about the soul of those people who lead that country.

SENIOR STATE DEPARTMENT OFFICIAL TWO:  We should dispel the notion that we flew halfway around the world to talk about annexation.  That’s been reported incorrectly. That was not the purpose of the trip. This wasn’t the top line. And then we have other major priorities.  I mean, start off with the Iranian threat, which we tend to sort of ignore it because it’s a constant.

SENIOR STATE DEPARTMENT OFFICIAL ONE:  But it’s actually severe and getting worse on some fronts, and the Iranians continue to make progress on the nuclear front, et cetera.  So this is a growing concern of ours.

QUESTION:  Have there been some incidents lately that kind of increase that urgency about the Iranian threat?

OFFICIAL ONE:  The most obvious thing is that you see things oftentimes blowing up in Syria. What appears to be increased Israeli operational tempo there and broadening its target set.

OFFICIAL ONE:  I didn’t say it was – I said “appears to be.”  If you’ve been following this over a long period of time, it’s increasing.

QUESTION:  Did you guys make any progress on the timeline for the renewal of the arms embargo.

OFFICIAL ONE:  We’re coordinating, we’re telling them what we’re thinking about about different issues.

OFFICIAL TWO:  The snapback stuff is important.  I mean, the Secretary – was it last week when we were at the podium – I mean, he’s made it pretty clear that his focus between now and … It’s getting the Security Council to move on this.  It’s a big priority.

OFFICIAL ONE:  I think for anybody who is out there concerned about Iranian behavior, that the prospect of them being able to purchase – they’re already being able to purchase all these others – avoiding sanctions and having people flout international law.  And if there is not this type of regime, you just imagine how much worse it’s going to be.  And of course, they export of lot of these weapons to their allies and their regional proxies, who, once again, use these weapons to attack member-states in good standing of the United Nations like Saudi Arabia, et cetera. So yes, it’s extremely dangerous.

QUESTION:  Have you guys, with COVID, noticed a significant change in behavior in the region?  I mean, are they hamstrung because of COVID or are they not?

OFFICIAL ONE:  No, you saw the President’s tweet about that we’re going to fill these Iranian boats full of lead and the harassment. This is in the middle of COVID.

OFFICIAL TWO:  Is that what he said?

OFFICIAL ONE:   Well, almost.  I was paraphrasing. But the point is I think the Iranians are still certainly provocative.  Maybe in some places slow down operational tempo a little bit, certain countries where the sort of proxies – there are curfews so it is hard for their proxy militias to go out at night and try and kill Americans.  But they still go, and the threat is still there, and they’re still planning and they’re still shooting.  Their allies in Iraq continue to shoot rockets at U.S. facilities.  We saw this at the BDSC, the Baghdad Support – Diplomatic Support Center, at the airport, for example, pretty recently.  So these things are ongoing.

The Secretary is making this trip because he recognizes the United States and Israel have much to learn from each other as we address current threats, whether those threats stem from a global pandemic or from Iran’s malign regional influence.  The United States and Israel draw on each other’s strengths.  That is true whether we’re mitigating and containing COVID-19 or countering Iranian destabilizing behavior.  We stand side by side with Israel in addressing all threats to the security and prosperity of the American and Israeli peoples.  Our unshakable commitment to Israel’s security is stronger than ever, as is the unbreakable tie between our countries.

I’m not going to break down how much time they’re going to talk about Israel’s borders or the extension of – potential Israeli extension of sovereignty in the West Bank.  I don’t know how much they’re going to talk about that versus the traditional areas of conversation, the issues of common concern – Iran destabilizing behavior in the region, activities in Syria, developments with Hizballah in Lebanon.  There – there’s standard matters that we talk about with Israel as a strategic partner, so it – undoubtedly, it would be a wide-ranging discussion.

QUESTION:  Israeli defense officials have said recently that at least some Iranian forces were leaving Syria, and then some well-informed Israeli analysts said that wasn’t so.  So what’s your view?  Has there been some Iranian withdrawal from Syria?

SCHENKER:  I’m not going to comment on whether there has or there hasn’t, but I would say that Iran has been persistent in its efforts to establish this beachhead basically on Israel’s border and to bring in advanced weaponry and assets targeting Israel and moving equipment, of course, through Syria to Hizballah with this sort of land bridge.  And we see repeatedly, oftentimes with no claims of responsibility, that these assets are being hit with great regularity, just pounded, and it would make sense at a certain point that Iran would want to cut its losses and downsize its presence there just because it’s increasingly costly to them in terms of life and property.  They would be well advised to start using some of this investment in this military infrastructure in Syria and with Hizballah to start spending some of that money on their own people who are suffering terribly from COVID.