Early on March 13, the United States struck five weapon storage facilities belonging to Kataib Hezbollah, the pro-Iranian militia in Iraq linked to the attack on the Camp Taji base that killed two U.S. and one British service members and injured 14 others. “The United States will not tolerate attacks against our people, our interests, or our allies,” Secretary of Defense Dr. Mark T. Esper said. “You don’t get to shoot at our bases and kill and wound Americans and get away with it,” he told reporters.

General Kenneth McKenzie, the head of U.S. Central Command, warned that Iran and its proxies still posed a threat to U.S. forces. “I think the threat remains very high. I think the tensions have actually not gone down,” he said at a news briefing on March 13. “I would caution I would caution Iran and its proxies from attempting a response that would endanger U.S. and coalition forces or our partners.”

The Pentagon did not specify the locations of the Kataib Hezbollah targets. But local sources said facilities in central Iraq were hit. A spokesman for the Popular Mobilization Forces, an umbrella group of Iraqi militias formed to fight ISIS, said that “there have been raids from unknown sources against the area of Jurf al Nasr in Babil province.” Ghazwan al Aysawi, a media relations officer for Karbala Airport, said U.S.-led coalition forces fired three missiles at the facility, which was still under construction, and killed one worker. The Iraqi military said five of its personnel were killed in the U.S. strikes. The United States has attacked Kataib Hezbollah personnel or facilities three times since December 2019.

On March 14, at least 25 rockets hit Camp Taji again. At least three American military personnel and two Iraqi soldiers were injured. “Those who conducted this attack must declare themselves to be dealt with by the law,” said Iraq’s Joint Operations Command in a statement. The military “considers any party that mobilizes and legitimizes these actions as a potential partner.” No group claimed responsibility for the daytime attack. The following is a statement from the Pentagon, a timeline of Kataib Hezbollah attacks and U.S. responses, and a profile of the militia.

Statement by the Department of Defense

These strikes were defensive, proportional, and in direct response to the threat posed by Iranian-backed Shia militia groups (SMG) who continue to attack bases hosting OIR coalition forces.

Yesterday’s attack on Camp Taji killed two U.S. and one U.K. service members and wounded 14 others. It marked the latest in a series of rocket attacks conducted by Iranian-backed SMGs against U.S. and coalition personnel – killing five and wounding dozens more, including Iraqi Security Forces.

“The United States will not tolerate attacks against our people, our interests, or our allies,” Secretary of Defense Dr. Mark T. Esper said. “As we have demonstrated in recent months, we will take any action necessary to protect our forces in Iraq and the region.”

During discussions with senior Iraqi officials, the department re-emphasized its commitment to the force protection of coalition service members and to preventing SMG attacks on coalition forces.

A number of SMGs, including KH, have a strong linkage with Islamic Revolutionary Guard Corps Qods Force and have repeatedly received lethal aid and other support from Iran that they have used to attack coalition forces.

These SMGs and their Iranian supporters must cease their attacks on U.S. and coalition forces or face consequences at a time and place of our choosing.
The U.S. and the coalition remain committed to the lasting defeat of ISIS, and the long-term security and stability of Iraq.

Dec. 29: The United States responded with airstrikes on Kataib Hezbollah positions in western Iraq and eastern Syria. The strikes, which reportedly killed at least 25 militants, targeted weapons depots and command centers that the group had used to attack U.S. forces and allies.

Dec. 31: Supporters of Kataib Hezbollah stormed the U.S. embassy compound in Baghdad to protest the U.S. airstrikes. The gunmen and demonstrators broke into a reception area inside the front gate but did not reach the main embassy buildings. They chanted “Death to America” and threw rocks and Molotov cocktails at the compound. Trump accused Tehran of orchestrating the attack and warned it would pay “a very big price.”

Secretary of Defense Mark Esper announced that the United States would deploy an infantry battalion from the 82nd Airborne Division in response to the attacks.

Jan. 3: President Trump ordered an airstrike on a convey of Iranian and Iraqi military leaders leaving Baghdad airport. The drone attack, launched on January 3 (January 2 US. time), killed seven people including General Qassem Soleimani, the head of the IRGC's elite Qods Force, and Abu Mahdi al Muhandis, a Kataib Hezbollah leader. Muhandis was also the deputy commander of the Popular Mobilization Forces (PMF), an umbrella group of militias formed to fight ISIS. Many PMF militias have received arms, training and funding from Iran. Muhandis had also been the senior commander of Kataib Hezbollah since its founding.

March 11: Some 30 Katyusha rockets were launched at Camp Taji base near Baghdad. More than a dozen landed on the base, wounding 14 and killing two U.S. and one British service members. No group claimed responsibility for the attack, but Iran-backed militias, including Kataib Hezbollah, Kataib Sayyed al Shuhada and Harakat Hezbollah al Nujaba lauded the operation.

Kataib Hezbollah, or Brigades of the Party of God, the 45th brigade of the PMF, dates back to 2004, when the Shiite militias began attacks on the U.S.-led coalition. Five small armed groups united to form this pro-Iran militia in 2007. In 2009, the U.S. State Department designated it a terrorist organization with an “anti-Western establishment and jihadist ideology.” The Treasury Department sanctioned the group and its leader, Abu Mahdi al Muhandis. It was the only Iraqi Shiite militia designated a terrorist organization by U.S. State Department.

After the 2011 U.S. withdrawal from Iraq, Kataib Hezbollah dispatched fighters to defend the Assad regime in Syria at the behest of Soleimani. Kataib Hezbollah joined the PMF and fought the Sunni extremists after ISIS swept through northern Iraq in 2014. Its forces continued to fight in both countries. “I will not shy away from mentioning the support of the Islamic Republic of Iran in terms of weapons, advising, and planning,” its leader, Muhandis said in March 2018. He also publicly thanked Lebanese Hezbollah for training its fighters in Iran.

Doctrine and Goals: Kataib Hezbollah’s overarching goal, as stated on its website, is to set up an Islamic government based on the principle of velayat-e faqih, with Iran as a model. The group has stipulated, however, that it wants to bring about “radical changes” by working within Iraq’s constitution rather than outside it. 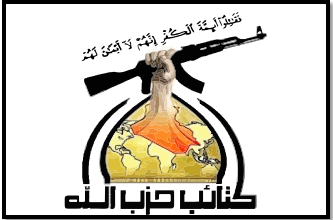 The group looks to Supreme Leader Khamenei as a spiritual guide. His picture often appears on its website. Its promotional materials have featured Shiite motifs, such as Imam Hossein and the Zaynab Mosque and Shrine near Damascus.

Kataib Hezbollah's identification with Iran’s ideology is reflected in its logo, which is similar to the insignia of the IRGC and Hezbollah. A fist holding an AK-47 rises from a map of Iraq rifle underneath a Quranic verse, “Fight the leaders of disbelief, for indeed, there are no oaths [sacred] to them.”

One of Kataib Hezbollah’s main objectives is to stem the influence of Baathists, the United States, and Sunni groups, such as ISIS. It rejected the return of U.S. forces to advise the Iraqi Army on confronting ISIS. It accused the United States of planning to reoccupy Iraq, control its wealth and weaken its Islamic identity. “The enemy of humanity, the U.S., can no longer desecrate Iraqi soil, as the fighters of the Hezbollah Brigades will not allow them to do so,” the group warned in December 2017. “The Iraqi government and Council of Representatives need to make a decisive decision about the presence of U.S. troops who should voluntarily withdraw before we force them to flee from the country.”

Leadership: Born in 1953, Jamal Jaafar Ibrahimi is better known by his nom de guerre Abu Mahdi al Muhandis. Muhandis means “the Engineer,” a reference to his original trade. He has been Kataib Hezbollah's senior commander since its founding.

Muhandis’ initial connection to Iran may have been through his mother, who is reportedly Iranian. He has boasted about his fluency in Farsi, what he calls “the language of the Islamic revolution.”

Muhandis joined the opposition Dawa party. Inspired by Iran’s revolution, he fled Iraq in 1979. He connected with the IRGC in the early 1980s. He headed the Badr Corps, which fought on Iran’s side during the 1980-1998 war against Saddam Hussein’s regime. He was also convicted in absentia--and later sentenced to death —for the 1983 bombing of U.S and French embassies in Kuwait. By the early 2000s, he had obtained Iranian citizenship and passed the leadership of the Badr Corps to Abu Mustafa al Sheibani.

Muhandis returned to Iraq after the 2003 U.S. invasion. He was elected to parliament in 2005 but fled to Iran to avoid U.S. detention for past attacks on U.S. forces. From Iran, he facilitated the supply and training of Shiite militias. Before the creation of Kataib Hezbollah, he arranged for Mahdi Army fighters to Iran for sniper training in 2007.

Muhandis returned to Iraq once again in 2014 and has since become one of the most powerful military leaders. After Prime Minister Abadi took office in September 2014, he tapped Muhandis as the PMF’s deputy commander.

From his years in Iran, Muhandis developed a close relationship with Soleimani, who referred to him on Iranian television as a dear brother and “living martyr.” Muhandis, in turn, said he was a proud soldier of “Haj Qassem.”

Iran's Qasem Soleimani & Iraq's Abu Mahdi Muhandis (Iraq's most powerful men) express admiration & respect for one another. These personal relationships go back decades, underpin and are critical to Iran's influence in the region and gives Iran a distinct edge over its rivals. pic.twitter.com/hXiDlwjMW3

Military: Kataib Hezbollah has been more secretive than other militias, so its size has been difficult to determine. In 2011, the militia was estimated to have 1,000 fighters, according to Iraqi intelligence. By December 2014, it claimed to have 30,000 troops. But a 2016 State Department report said its membership was “estimated as at least 400 individuals.”

Kataib Hezbollah has participated in many major operations against ISIS. It fought in central Ramadi and Karmah as well as Amerli and Mosul in the north. Kataib Hezbollah and the Badr Organization were the two main Shiite groups that fought ISIS in Tal Afar, near Mosul.

On December 27, 2020, Kataib Hezbollah launched rockets at the K1 military base near Kirkuk, which housed U.S. military service members and Iraqi personnel. The attack killed a U.S. civilian contractor and wounded four U.S. service members and two Iraqis. The United States responded with airstrikes two days later. On December 31, the group stormed the U.S. embassy compound to protest the U.S. airstrikes. On January 3, the United States launched an airstrike on a convoy of Iranian and Iraqi military leaders leaving Baghdad airport. General Qassem Soleimani, the head of the IRGC's elite Qods Force, and Abu Mahdi al Muhandis, the leader of Kataib Hezbollah, were among the dead.

On March 13, 2020, the United States struck five weapon storage facilities belonging to Kataib Hezbollah in retaliation for a rocket attack on Camp Taji that killed two U.S. and one British service members.

Political Wing: Kataib Hezbollah is not affiliated with a political party. In February 2018, it announced that its members would not run in the May parliamentary election.