Iran’s prisons became a focal point in the outbreak of the coronavirus since shortly after the first case was reported on February 19. By February 25, cases were reported in at least three prisons— Karaj Prison, Evin Prison and Tehran's Greater Prison, also known as Fashafuyeh. On March 3, Iran’s judiciary announced that it would grant furloughs to 54,000 healthy prisoners to help stem the spread of the virus. Judiciary spokesman Gholamhossein Esmaili said that prisoners with long sentences or those deemed dangerous to the public would not be released. Some prisoners had to pay large bails in exchange for being granted temporary leave.

Separately, Supreme Leader Ayatollah Ali Khamenei agreed to pardon "a large number of inmates" in a honor of Eid al Mab’ath – the anniversary of the day Prophet Muhammad was chosen as God’s messenger, the birthday of Imam Ali – the first Shiite Imam, and Nowruz, the Iranian new year. The judiciary said that the clemency would apply to those sentenced to more than 10 years who had served at least half of their sentences. Men above the age of 70 and women above the age of 60 would be pardoned if they had served at least one-fifth of their sentences.

Iran had been under mounting pressure to act. The Center for Human Rights in Iran, a group based in New York, condemned the regime’s initial response to the prison outbreak. “We’re receiving disturbing reports that Iranian authorities are neglecting their domestic and international legal obligations to protect prisoners from contracting COVID-19 during this health crisis,” Executive Director Hadi Ghaemi said on February 28. “Prison populations are more susceptible to viral outbreaks than the general population because of their confined living conditions.”

Tehran’s Evin Prison had reportedly run out of basic medicine, such as pain relievers and cold tablets. The prison also had a shortage of sanitary products, including disinfectants and bleach, according to the relatives of inmates. On February 28, Sherry Izadi, the wife of detained British-Iranian dual national Anoush Ashoori, said that prisoners “haven’t had access to any doctors for about 6 weeks.”

Several dual nationals detained in Iranian prisons feared for their health. On February 29, Nazanin Zaghari-Ratcliffe, a British-Iranian held in Evin, suspected that she had contracted the virus but said that prison officials had refused to test her or provide her with medical care. “For a long time this has not felt like a normal cold,” she told her friends and family. “These symptoms have lasted almost a week. I know I need to get medicine to get better.”

Richard Ratcliffe last spoke to his wife on Saturday and is desperate for her to be tested for the infection.

He says he has asked the government to press for her to be tested. pic.twitter.com/KBsDAUttsp

Britain urged the Iranian government to protect British-Iranian nationals exposed to the virus. “We call on the Iranian government to immediately allow health professionals into Evin prison to assess the situation of British-Iranian dual nationals,” the Foreign Office said on February 29. On March 3, Iranian prison officials said that they would grant Zaghari-Ratcliffe furlough. On March 9, Zaghari-Ratcliffe's family said that she was informed that her release was not imminent. "Cumulatively the experience is not just cruel and degrading. The cumulative effect – of promising to release and failing to do so, again and again – is a kind of mental torture. That is its design," said a statement released by the Free Nazanin campaign.

But on March 17, Zaghari-Ratcliffe's family said that she had been granted temporary release until April 4. She was reportedly required to wear an ankle monitor and remain within 300 meters of her family's home in Tehran. On March 28, Zaghari-Ratcliffe's husband reported that her furlough had been extended an additional two weeks. He also said that the judiciary was considering granting her clemency, which would need approval from the supreme leader. 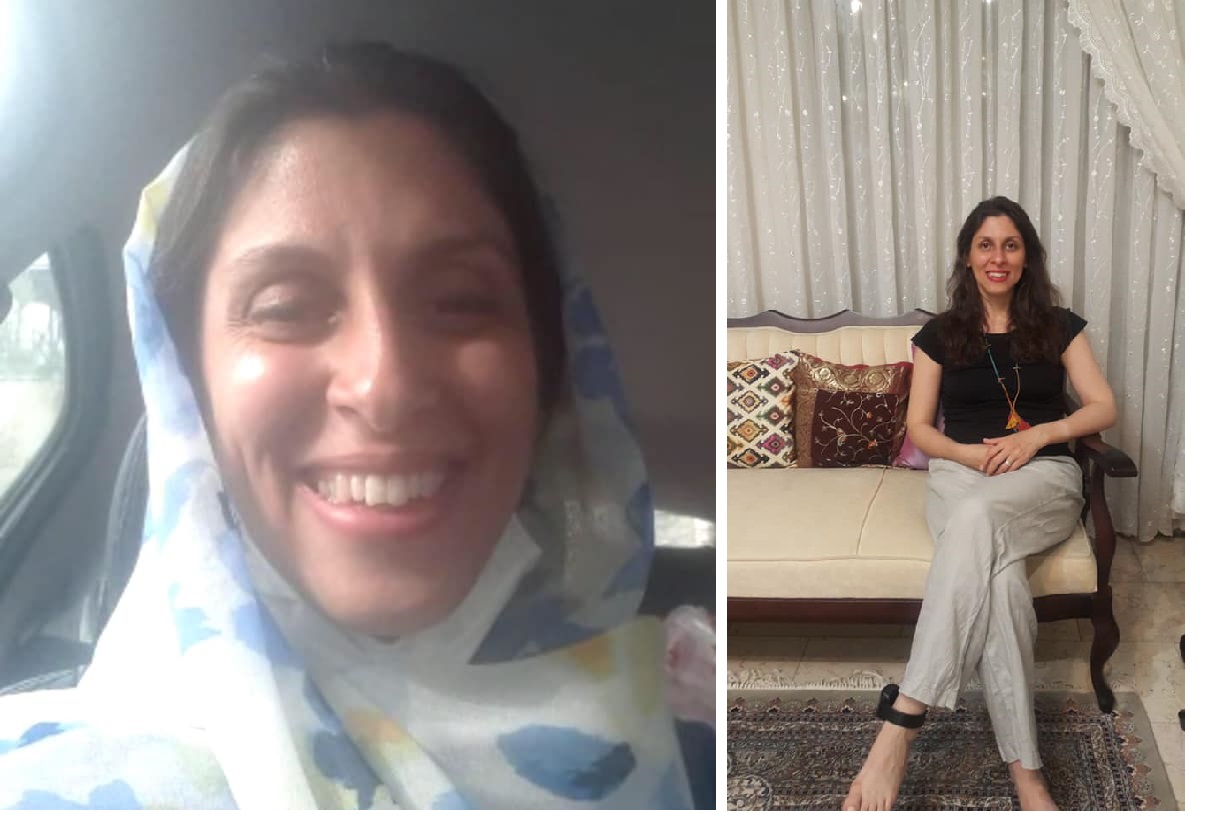 On March 2, the lawyer of Siamak Namazi, an Iranian-American detained in Evin, reported that his client was at “serious risk” of contracting the virus. “To keep Siamak at Evin prison in the midst of a coronavirus outbreak and without access to testing or even basic medicines constitutes cruel, inhuman, or degrading treatment in violation of Iran’s obligations under the Convention Against Torture,” said Jared Genser. On March 17, Genser reported that Namazi's request for furlough had been denied.

On March 10, Secretary of State Mike Pompeo urged Iran to release “all wrongfully detained Americans being held in Iran.” He warned that the United States would hold Iran accountable if any of the American prisoners died from coronavirus, which had spread to at least three Iranian prisons by February 25. “Our response will be decisive,” Pompeo said. Pompeo added that Iran’s decision to grant furloughs to 70,000 prisoners showed “its ability to grant clemency and show mercy.”

On March 17, Pompeo suggested that Iran was considering releasing American detainees. “We’re aware that they are thinking about whether to release them [Americans] or not,” Pompeo said. “We are urging them, as we have done publicly many times, to release every American that is being wrongfully held there as a humanitarian gesture given the risk that is posed to them given what’s taking place inside of Iran.”

On March 19, the U.S. State Department announced that Michael White, a U.S. Navy veteran detained in Iran, was temporarily released from prison on a medical furlough.  His release was facilitated by the Swiss, who represent U.S. interests in Iran. White was required to remain in Iran throughout his furlough. He will undergo a medical exam at the Swiss embassy in Tehran, according to the State Department.

On March 21, France announced that Roland Marchal, a French national detained in Iran on security charges, was released as part of a prisoner swap with Tehran. In return, France agreed to release Jalal Ruhollahnejad, an Iranian engineer arrested for violating U.S. sanctions. In May 2019, France had approved the extradition of Ruhollahnejad to the United States, where he faced charges of attempting to illegally import U.S. technology for military purposes.

On March 24, President Hassan Rouhani announced that Iran would extend furloughs granted to 100,000 prisoners. The return date for inmates was changed from April 3 to April 19.

On March 30, Enayatollah Rahimi, governor of Fars province, said that a riot broke out at Adel Abad Prison in the city of Shiraz. Rahimi said that prisoners "broke cameras and caused other damage in two sections of the prison where violent criminals are kept." A separate riot occurred at Saqqez Prison in Iran’s western Kurdistan province. State media reported that 70 prisoners had escaped during the chaos.

At least 36 prisoners were killed by security forces during protests over sanitary conditions in eight prisons, according to an Amnesty International report on April 9. The report said that live ammunition and tear gas were used against detainees. “It is abhorrent that instead of responding to prisoners’ legitimate demands to be protected from COVID-19, Iranian authorities have yet again resorted to killing people to silence their concerns,” said Diana Eltahawy, Amnesty International’s Deputy Regional Director of Middle East and North Africa.

The following is a list of dual nationals and foreigners detained in Iran:

Michael White: White, a U.S. national, was sentenced to 10 years in prison in March 2019 for insulting the supreme leader and posting a private photograph publicly. He is held at Vakilabad Prison in the city of Mashhad.

Morad Tahbaz: Tahbaz, an Iranian-American environmentalist, was charged with espionage and sentenced to 10 years in prison in November 2019. He is held at Evin Prison in Tehran.

Karan Vafadari: Vafadari, an Iranian-American art dealer, was arrested with his Iranian wife on espionage charges and sentenced to 27 years in prison in January 2018. He is held at Evin Prison.

Baquer Namazi: Namazi, an Iranian-American former UNICEF official, was charged with espionage and sentenced to 10 years in prison in October 2016. He was granted a medical furlough in August 2018.

Siamak Namazi: Namazi, an Iranian-American businessman, was sentenced to 10 years in prison for collaborating with a foreign government. He is being held at Evin Prison.

Kylie Moore-Gilbert: Moore-Gilbert, a dual British-Australian national, was arrested in September 2018 by IRGC intelligence agents on charges of espionage. Her family did not make her arrest public until September 2019, after an appeal on her 10-year prison sentence was denied. Moore-Gilbert is held at Evin Prison.

Anoush Ashoori: Ashoori, a dual Iranian-British national, was sentenced to 10 years in prison in August 2019 for espionage. He is held at Evin Prison.

Kameel Ahmady: Ahmady, an Iranian-British anthropologist, was arrested in August 2019 on espionage charges. He is held in Evin Prison and awaits trial.

Nazanin Zaghari-Ratcliffe: Zaghari-Ratcliffe, a British-Iranian dual citizen, was sentenced to five years imprisonment in September 2016 for plotting to overthrow the government. She is held in Evin Prison.

Negad Nobakht: Nobakht, a British-Iranian dual citizen, was sentenced to seven years in 2014 for “gathering and participation with intent to commit crimes against national security” and “insulting Islamic sanctities.” She is held in Evin Prison.

Kamal Foroughi: Foroughi, a British-Iranian businessman, was sentenced to eight years’ imprisonment on espionage charges in 2013. He is held in Evin Prison.

Fariba Adelkhah: Adelkhah, a French-Iranian anthropology and social sciences researcher, was arrested in June 2019 on espionage charges. She awaits trial in Evin Prison.

Nazak Afshar: Afshar, a French-Iranian dual citizen, was arrested on espionage charges and sentenced to six years in prison in April 2016. She is held in Evin Prison.

Kamran Ghaderi: Ghaderi, an Austrian-Iranian businessman, was sentenced to 10 years in prison in October 2016 for espionage on behalf of the United States. He is held in Evin Prison.

Ahmadreza Jalali:  Jalali, a Swedish-Iranian academic and researcher, was charged with espionage and sentenced to death in February 2017. In August 2019, Jalali was reportedly moved from Evin Prison to solitary confinement in an unknown location.