Iran and the NPT

Iran was one of the original 62 signatories to the Non-Proliferation Treaty (NPT), the most important global treaty on the world’s deadliest weapon. It went into effect in 1970 and has been the standard of nuclear arms control ever since. It banned countries other than United States, Russia, China, Britain, and France from acquiring nuclear weapons. In return, the non-nuclear signatories were permitted to develop peaceful nuclear programs for power generation. By 2020, 190 countries had signed it.

On January 20, 2020, Iran threatened to withdraw from the NPT if European powers refer Iran to the U.N. Security Council over its breaches of the 2015 nuclear deal. “If the Europeans continue their improper behavior or send Iran’s file to the Security Council, we will withdraw from the NPT,” said Foreign Minister Javad Zarif. Britain, France and Germany, co-sponsors of the historic accord, had urged Iran to fully honor its obligations under the deal, known as the Joint Comprehensive Plan of Action (JCPOA). On January 14, the European powers triggered the deal’s dispute resolution mechanism, which could lead the case going to the United Nations—and potentially the re-imposition of U.N. sanctions.

Iran had previously threatened to withdraw from the NPT. “The Islamic Republic’s choices are numerous, and the country’s authorities are considering them ... and leaving NPT is one of them,” Zarif told state media in April 2019, after the United States tightened sanctions on Iran. “There is not much time left until the end of the 60 days ultimatum given by Iran to the Europeans to save the (2015) deal. After that Iran will suspend implementation of the Non-Proliferation Treaty,” said Mojtaba Zolnour, the head Parliament’s nuclear committee, in June 2019.

The JCPOA, concluded in 2015, was based on regulations established in the NPT. In May 2018, President Donald Trump withdrew the United States from the deal and re-imposed U.S. sanctions six months later. The viability of the JCPOA was further challenged in July 2019, when Iran began breaching the deal. Iran made incremental and calibrated moves to pressure European countries to do more to offset the negative impact of U.S. sanctions. The following is a timeline of Iran’s involvement with the NPT. 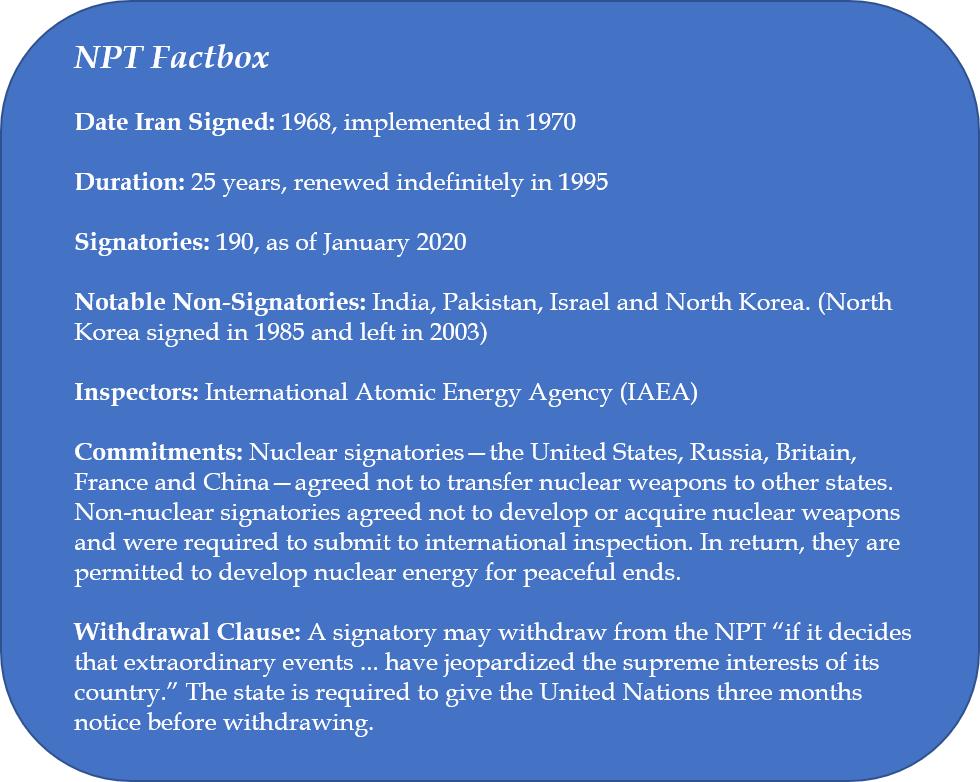 July 1 – Iran signed the Nuclear Non-Proliferation Treaty (NPT) with several nuclear and non-nuclear powers. The nuclear signatories agreed not to transfer nuclear weapons or technology to other states, and non-nuclear parties agreed not to develop or acquire nuclear weapons. The treaty also required all signatories to submit to monitoring by the International Atomic Energy Agency (IAEA). The treaty had a duration of 25 years and would be reviewed every five years.

March 5 – The NPT was implemented with 46 signatories.

May 15 – Iran signed the NPT’s Safeguards Agreement with the IAEA. The safeguards allowed inspections to verify that nuclear enrichment for peaceful nuclear energy is not diverted to nuclear weapons or other nuclear explosive devices.

May 30 – The NPT signatories, comprised of 91 states, held the first conference to assess the treaty’s implementation. The member-states decided to hold a review every five years.

The United States and Iran severed ties after the seizure of the U.S. embassy in Tehran. Iranian nuclear projects were halted, including the U.S. supply of highly enriched uranium for the Tehran Research Reactor.

May 11 – The signatories of the NPT agreed to extend the treaty indefinitely after a review conference in New York. Efforts to renew the agreement were spearheaded by Ambassador Thomas Graham Jr., a senior U.S. diplomat and nuclear negotiator.

May 22 – In the sixth review conference, NPT signatories agreed to a 13-step process toward nuclear disarmament, which included an “unequivocal undertaking by the nuclear-weapon States to accomplish the total elimination of their nuclear arsenals.”

June 19 – The IAEA concluded that Iran had not violated the NPT but said that it should have been more forthcoming about the Natanz uranium enrichment facility and the Arak heavy water production plant. The IAEA later urged Iran to sign and ratify the Additional Protocol to the Safeguards Agreement of the Nuclear Non-Proliferation Treaty, which would provide inspectors with greater access to  nuclear sites on shorter notice.

September 12 – The IAEA Board of Governors passed a resolution demanding that Iran suspend all enrichment activities. Iran was required to declare all uranium-enrichment sites and activities and allow IAEA inspectors to conduct inspections at any location in the country.

October 21 –  Iran agreed to meet the IAEA Board of Governors’ demands. It also agreed to sign Additional Protocol to the Safeguards Agreement of the Nuclear Non-Proliferation Treaty.

Nov. 14 – Iran accepted the Paris accord after negotiations with Britain, France and Germany. The agreement recognized Tehran's rights to pursue nuclear technology for peaceful purposes and reaffirmed its commitment not to acquire nuclear weapons. In return, Iran agreed to temporarily suspend uranium enrichment activities and allow the IAEA to test the sites. The IAEA decided not to refer Iran’s nuclear program to the U.N. Security Council.

Sept. 24 –The IAEA found Iran in noncompliance with the NPT Safeguards Agreement and decided to refer Tehran to the U.N. Security Council for further action. The decision followed Iran’s repeated failure to fully report its nuclear activities. Tehran countered that it might suspend its voluntary implementation of the Additional Protocol that allowed more intrusive and sudden inspections.

Feb. 4 – The IAEA reported Iran to the U.N. Security Council for its non-compliance with the NPT Safeguards Agreement.

July 31 – The U.N. Security Council passed Resolution 1696 demanding that Iran suspend its uranium enrichment activities within one month. No sanctions were imposed but the resolution warned that "appropriate measures" would be taken in the case of Iranian non-compliance. Tehran called the resolution illegal.

Dec. 23 – The U.N. Security Council adopted Resolution 1737, sanctioning Iran for its failure to halt uranium enrichment. The resolution banned the sale of nuclear-related technology to Iran and froze the assets of key individuals and companies related to the nuclear program.

June 9 – The U.N. Security Council adopted Resolution 1929 which tightened proliferation-related sanctions on Iran. It banned Tehran from testing missiles capable of carrying nuclear warheads and imposed an embargo on the transfer of major weapons systems to Iran. Major players in Iran’s energy sector were liable to be sanctioned for supporting nuclear or ballistic missile development.

Nov. 8 – An IAEA report accused Iran continuing nuclear weaponization work since 2003, including a secret project to enrich uranium. It also indicated that there were 8,000 centrifuges installed at Natanz, 6,200 of which were operating. Tehran denied the report and accused the United States of fabricating the evidence.

October 28-29 – Iran held discussions with the IAEA regarding the watchdog’s investigations of nuclear activities that violated the NPT. The parties issued a joint statement committing to "practical measures" that would "strengthen cooperation and dialogue with a view to future resolution of all outstanding issues." Iran and the IAEA agreed to meet again in November.

July 14 –  Iran and six world powers reached a landmark deal in which Iran agreed to curb its nuclear program and provide access to inspectors in exchange for sanctions relief. The agreement, known formally as the Joint Comprehensive Plan of Action (JCPOA), was implemented in January 2016.

May 8 – President Trump announced the U.S. withdrawal from the JCPOA and the reimposition of sanctions on Iran. The other five parties, including Britain, China, France, Germany, and Russia –vowed to uphold the accord. Iran said it would fulfill its obligations if it could reap the economic benefits guaranteed in the deal.

May 24 – An IAEA quarterly report showed that Iran was adhering to all nuclear commitments under the JCPOA.

November – The Trump administration reimposed sweeping sanctions against Tehran that were lifted after the 2015 nuclear deal.

April 28 – Iran warned that it could leave the NPT after the United States tightened sanctions on Iran’s oil and gas industry. “The Islamic Republic’s choices are numerous, and the country’s authorities are considering them ... and leaving NPT (nuclear Non-Proliferation Treaty) is one of them,” Foreign Minister Mohammad Javad Zarif said.

June 17 – Iran said that it would leave the NPT if European powers did not save the 2015 nuclear deal. “There is not much time left until the end of the 60 days ultimatum given by Iran to the Europeans to save the (2015) deal. After that Iran will suspend implementation of the Non-proliferation Treaty,” said Mojtaba Zolnour, head of the nuclear committee of parliament.

January 5 – Iran announced that it would no longer abide by restrictions on uranium enrichment imposed by the JCPOA. Tehran emphasized that all its actions were reversible and that it would return to the deal if sanctions would be lifted and its interests could be guaranteed. Iran said it would continue to cooperate with International Atomic Energy Agency inspectors.

January 14 – Britain, France and Germany triggered the dispute resolution mechanism under the 2015 nuclear deal. It was the strongest action taken by European powers to enforce the agreement. If Iran does not return to compliance, the process could result in the reimposition of U.N. sanctions and ensure that an arms embargo does not expire in October 2020.

Jan. 28 – A group of Iranian lawmakers called for a debate on whether Iran should leave the NPT. A proposal would need to be passed in two readings and then ratified by the Guardian Council to become a law. But the supreme leader has the final say on the nuclear program.