Iranian newspapers widely covered the revelation that the Revolutionary Guards accidentally shot down Ukraine International Airlines Flight 752, killing all 176 people on board. Some of the headlines were mournful while others expressed anger at the government, which denied responsibility for three days before admitting fault. The papers largely refrained from covering anti-government protests sparked by the news, probably due to censorship, but many outlets were critical of the handling of the situation. Reformist newspaper Etemad was the boldest. “Apologize, Resign,” read its front page on January 12. “Being Prosecuted by Public Opinion: 27 Questions on Disastrous Plane Crash,” read one headline in Shahrvand, another reformist paper. The following is a roundup of front pages and headlines with translation from IFP News. 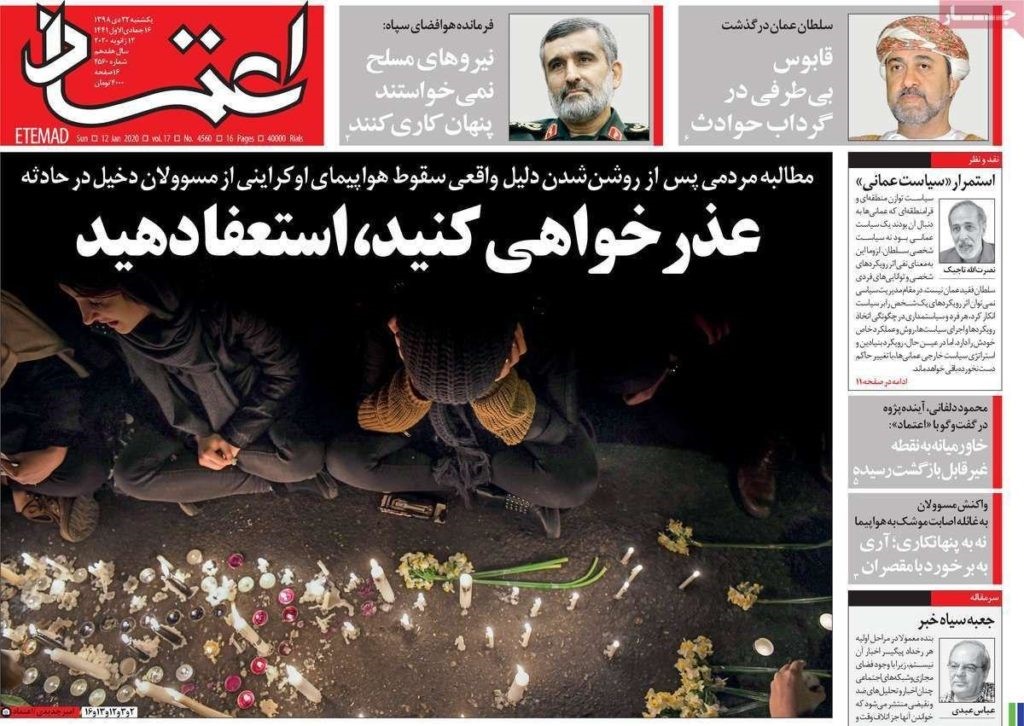 Even More Bitter than Coffee 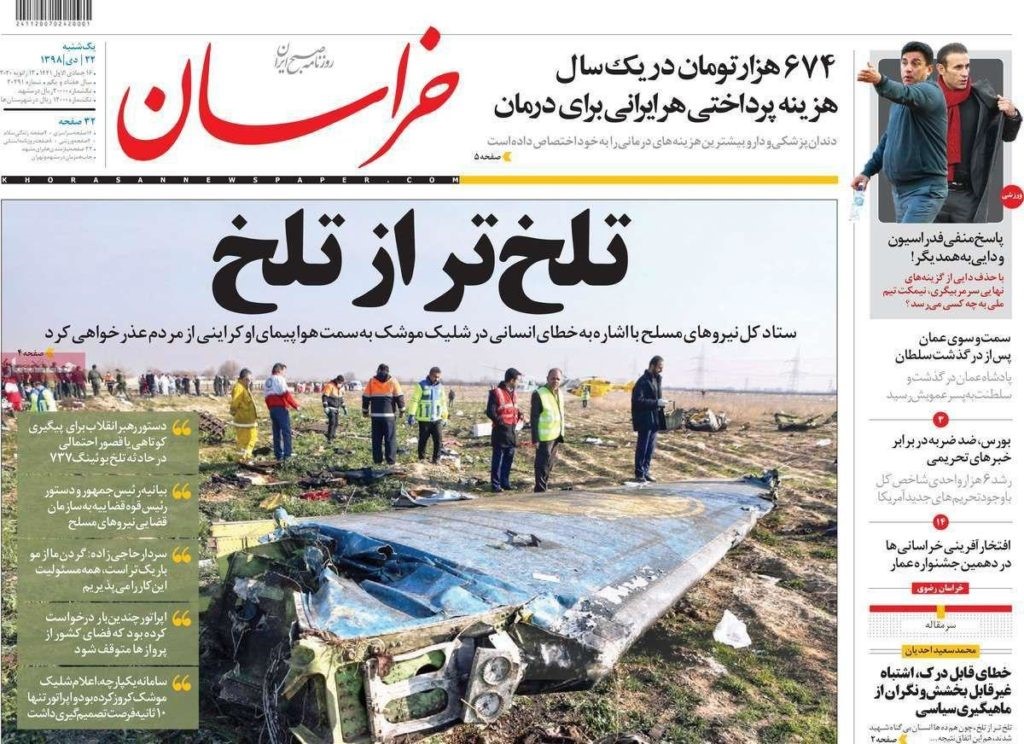 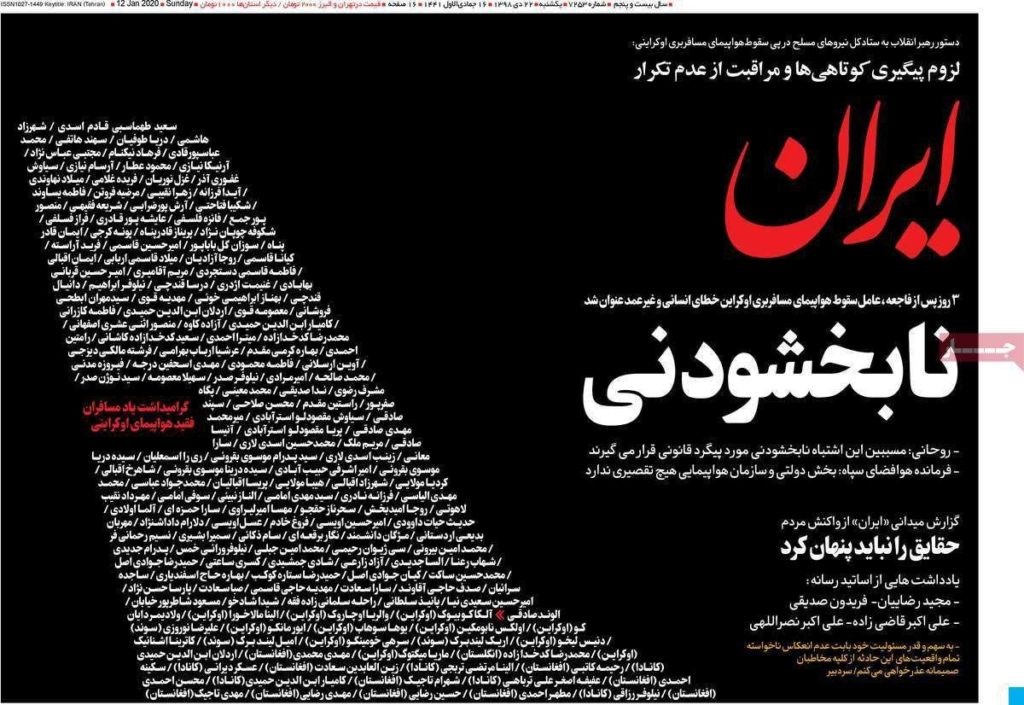 Being Prosecuted by Public Opinion: 27 Questions on Disastrous Plane Crash 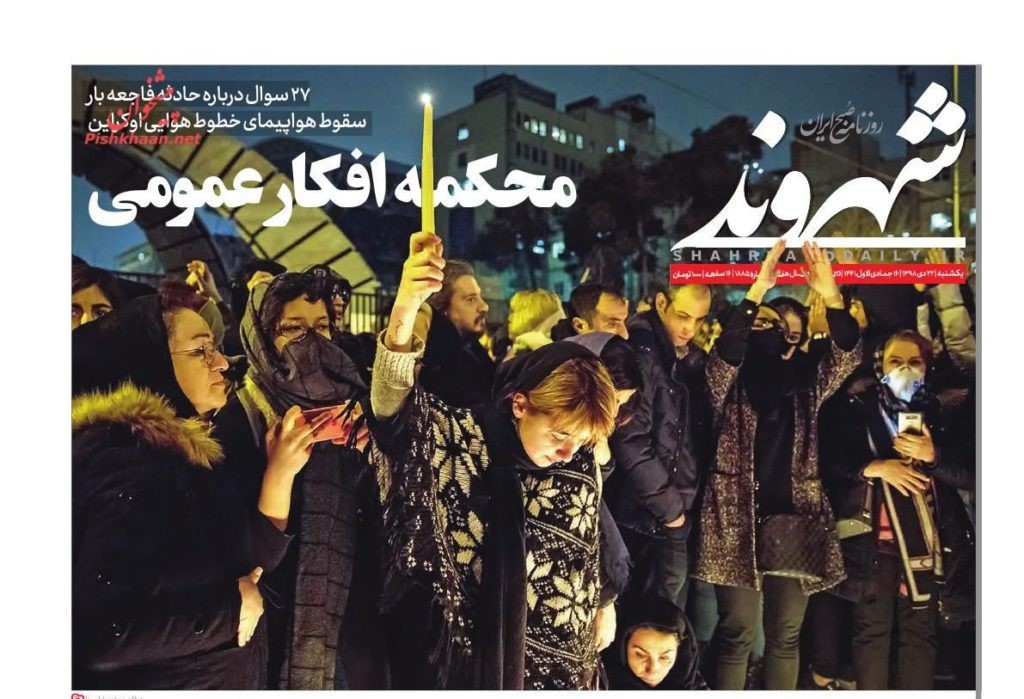 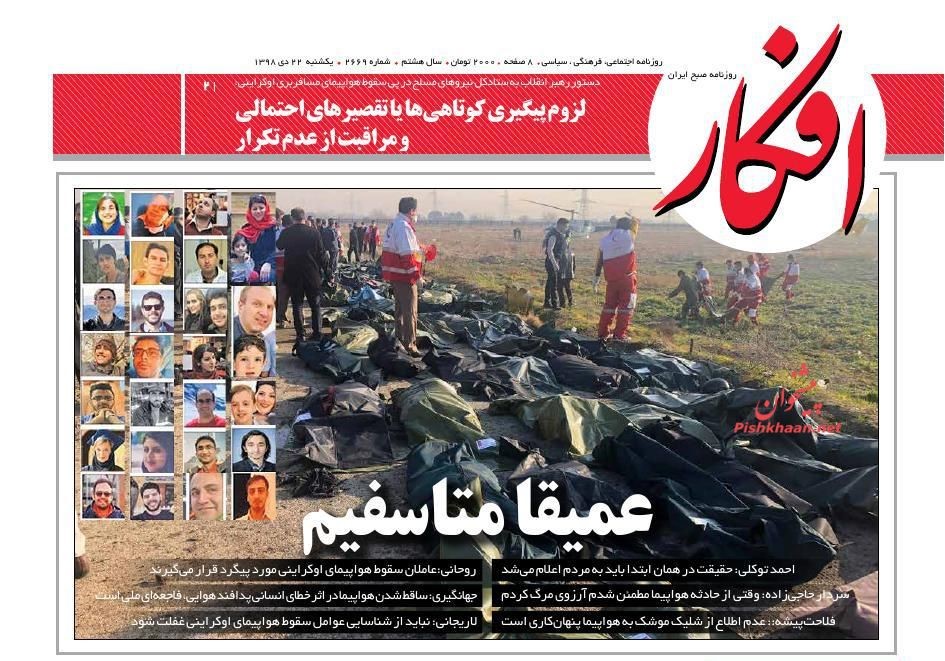 We Can’t Believe It 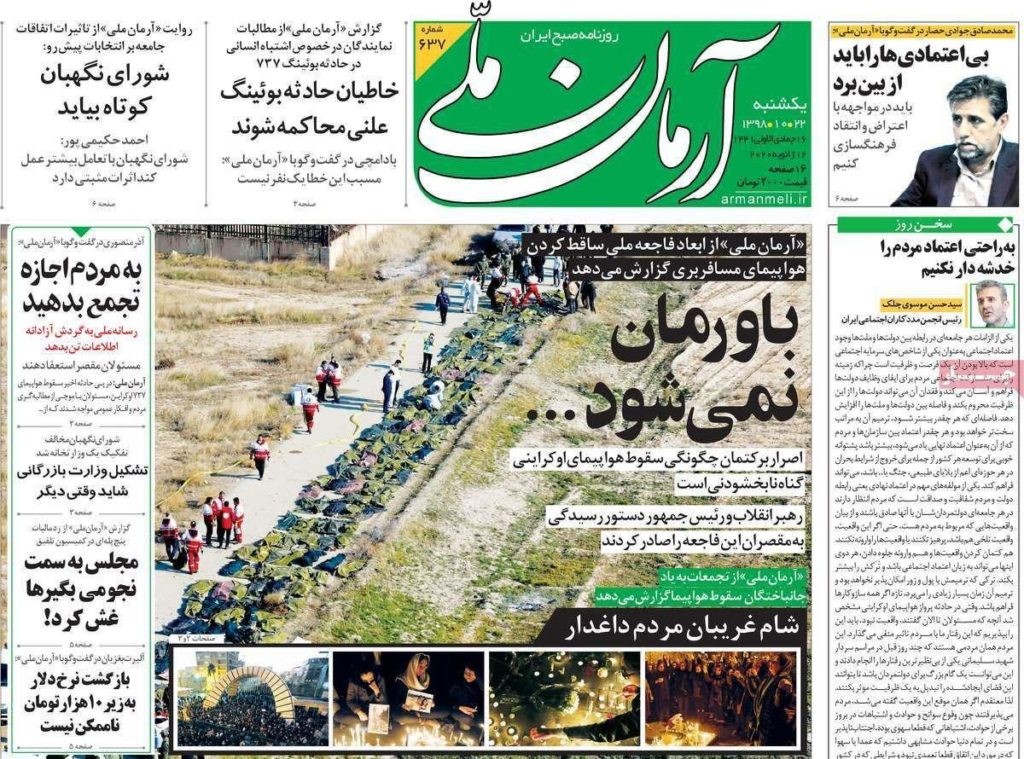 Second Shock of a Crash 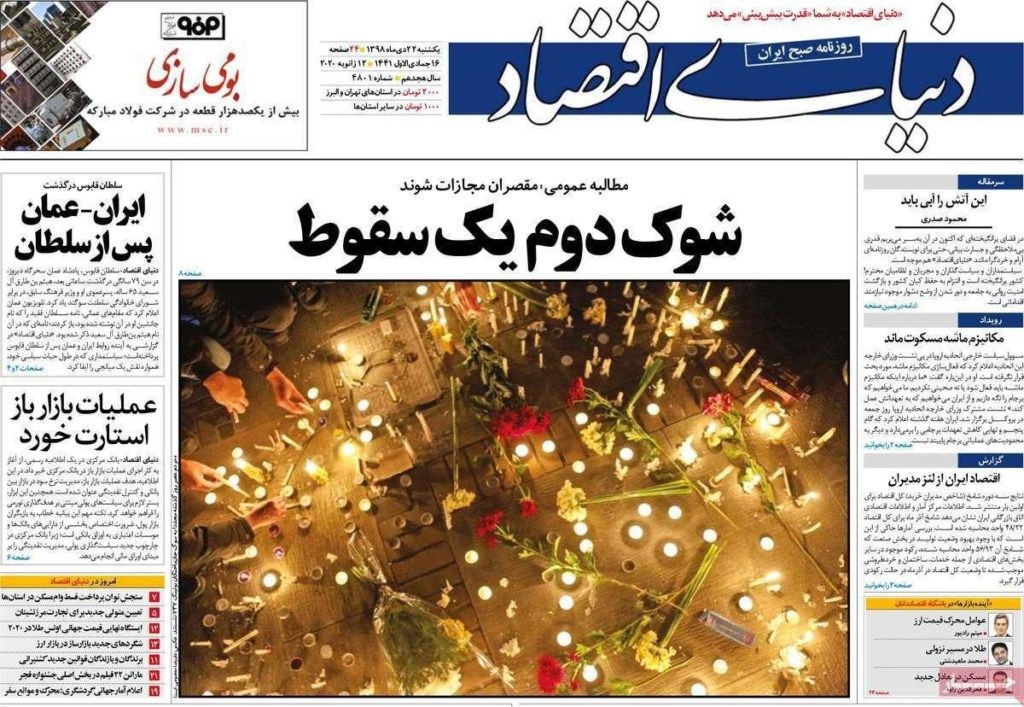 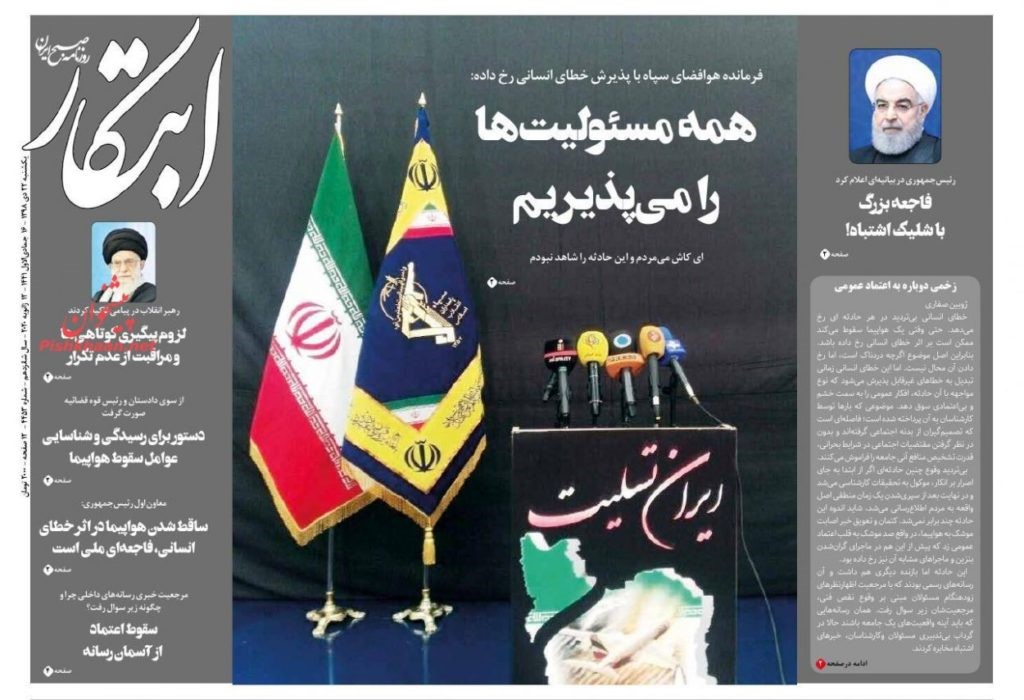 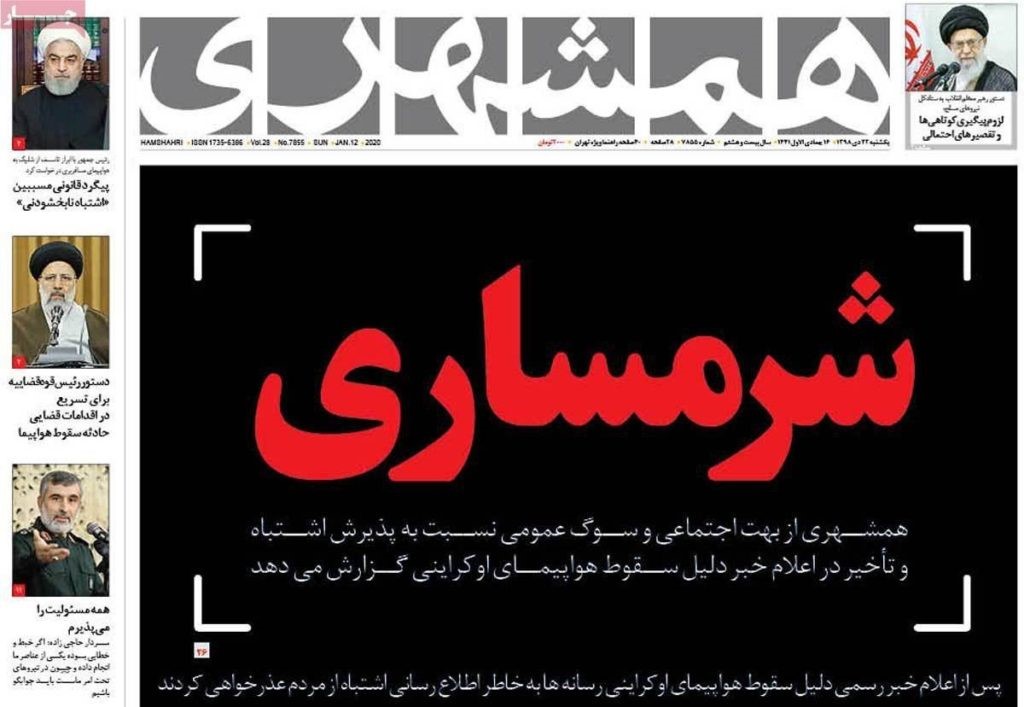 2- IRGC Aerospace Chief: I Wish I Had Died and Wouldn’t See That Incident

3- Zarif: US Adventure Resulted in Human Error behind Plane Crash 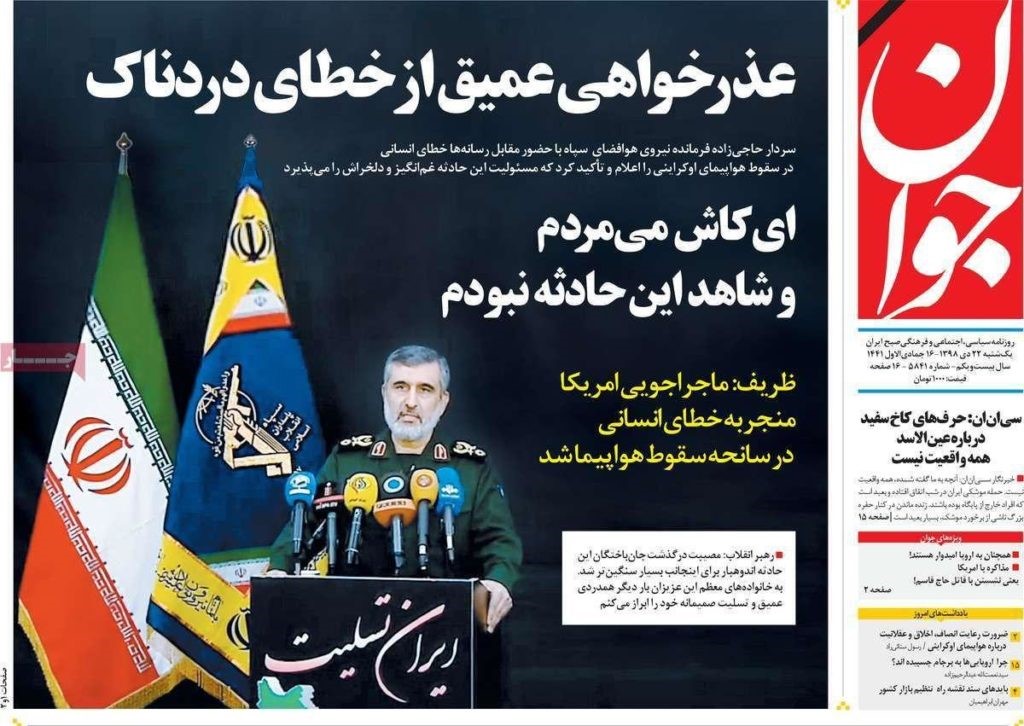 * Boeing 737 Plane Crashed Not for Technical Problem, but by Air Defense Missile 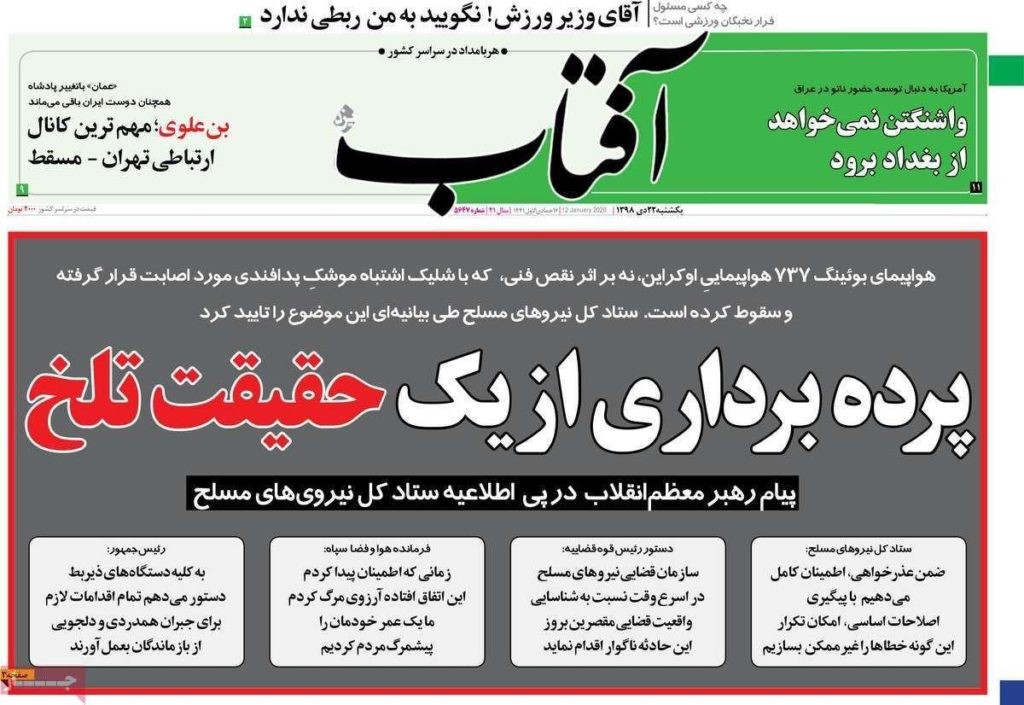 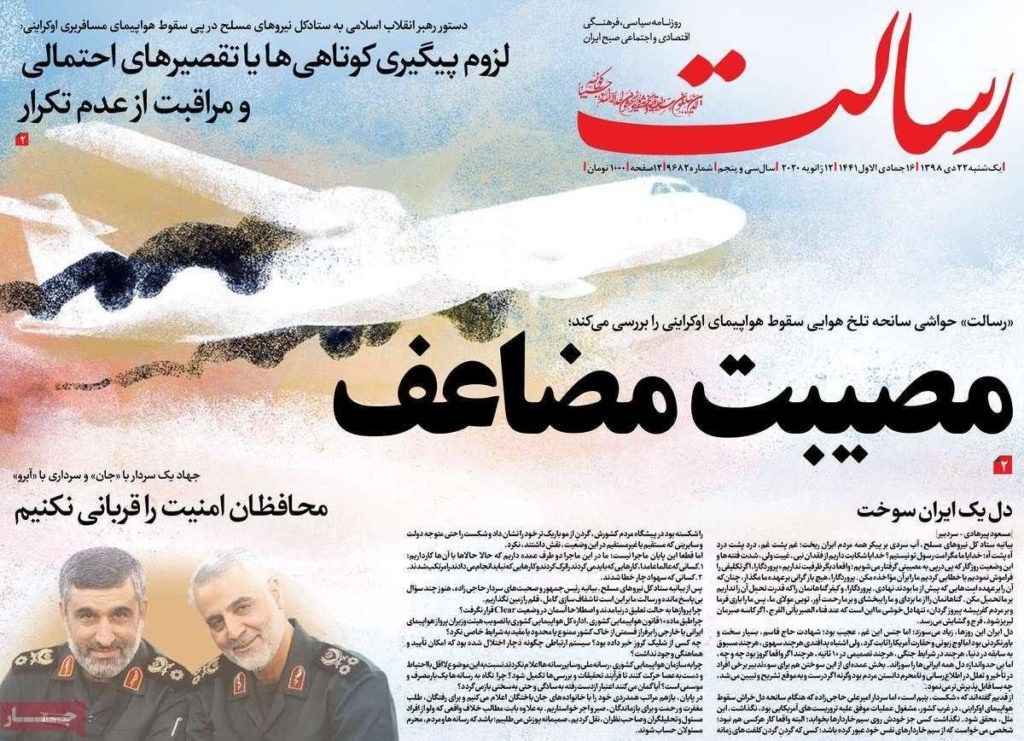 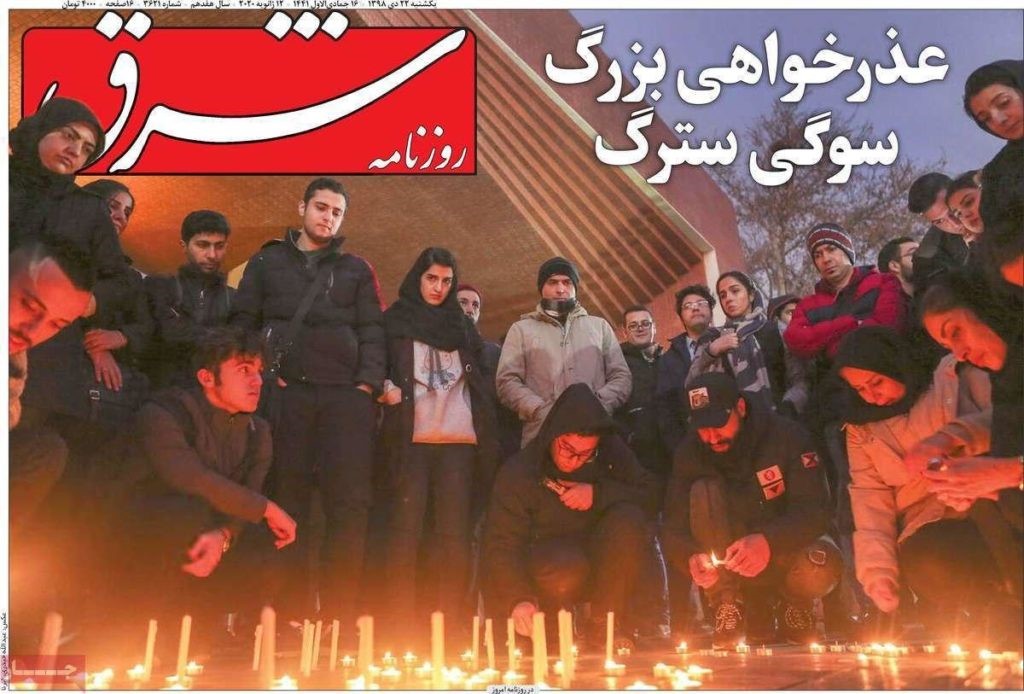 IRGC Chief: I’m Sorrier than Anyone for Crash of Ukraine Plane 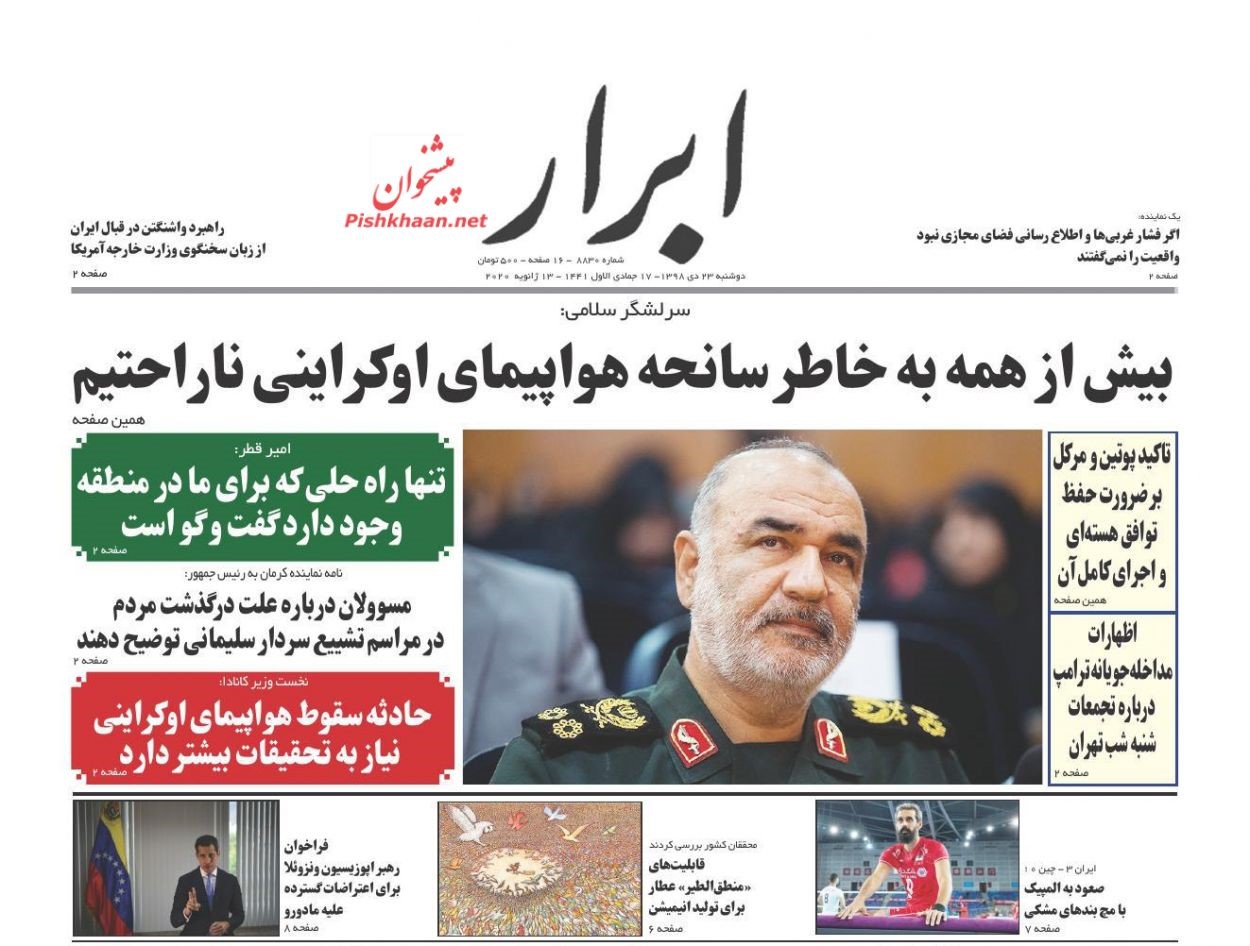 2- Sporadic Protests in Tehran, Some Cities 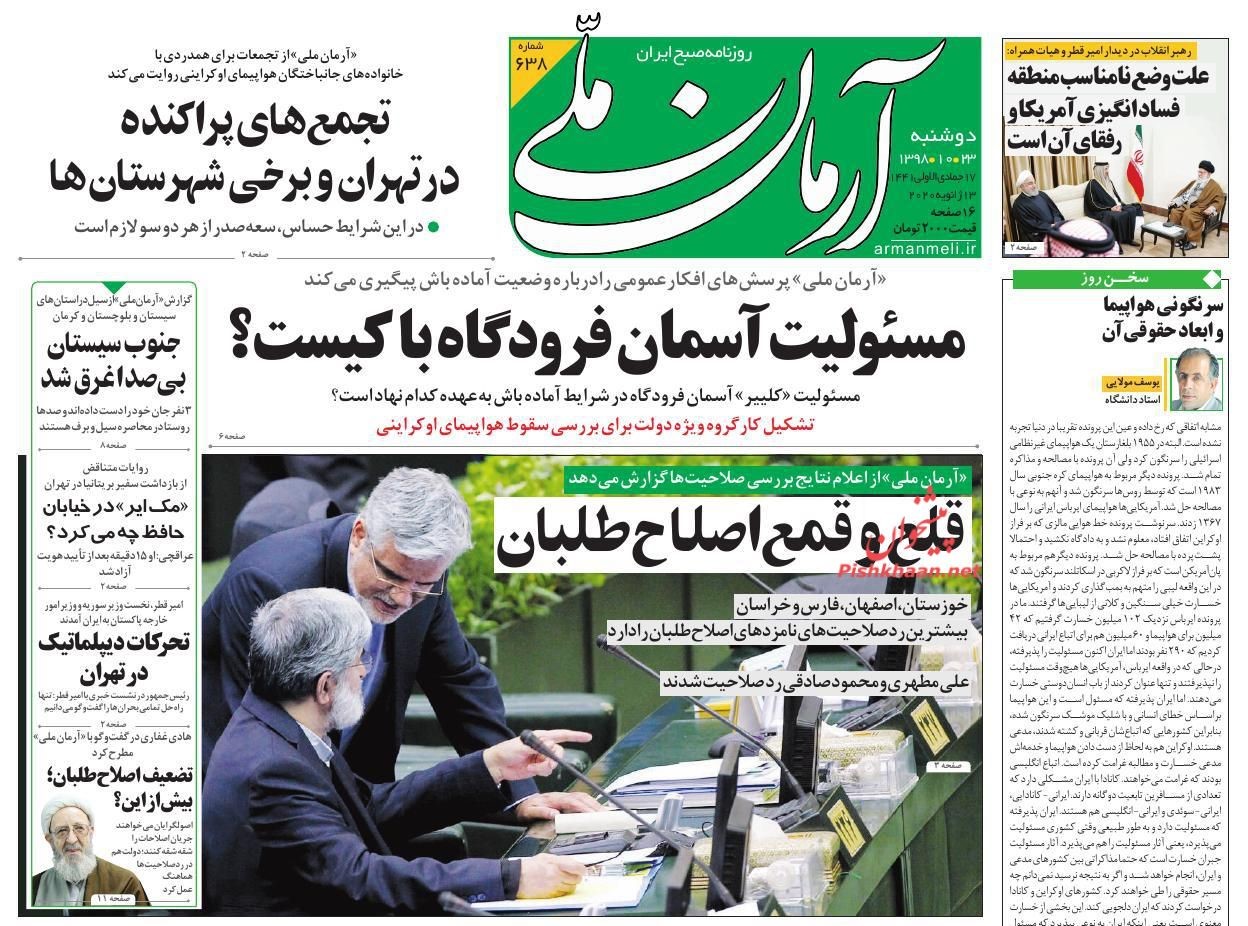 * We Made a Mistake; Some of Our People Died for Our Mistake; but It Was Unintentional; We Apologize and Will Compensate 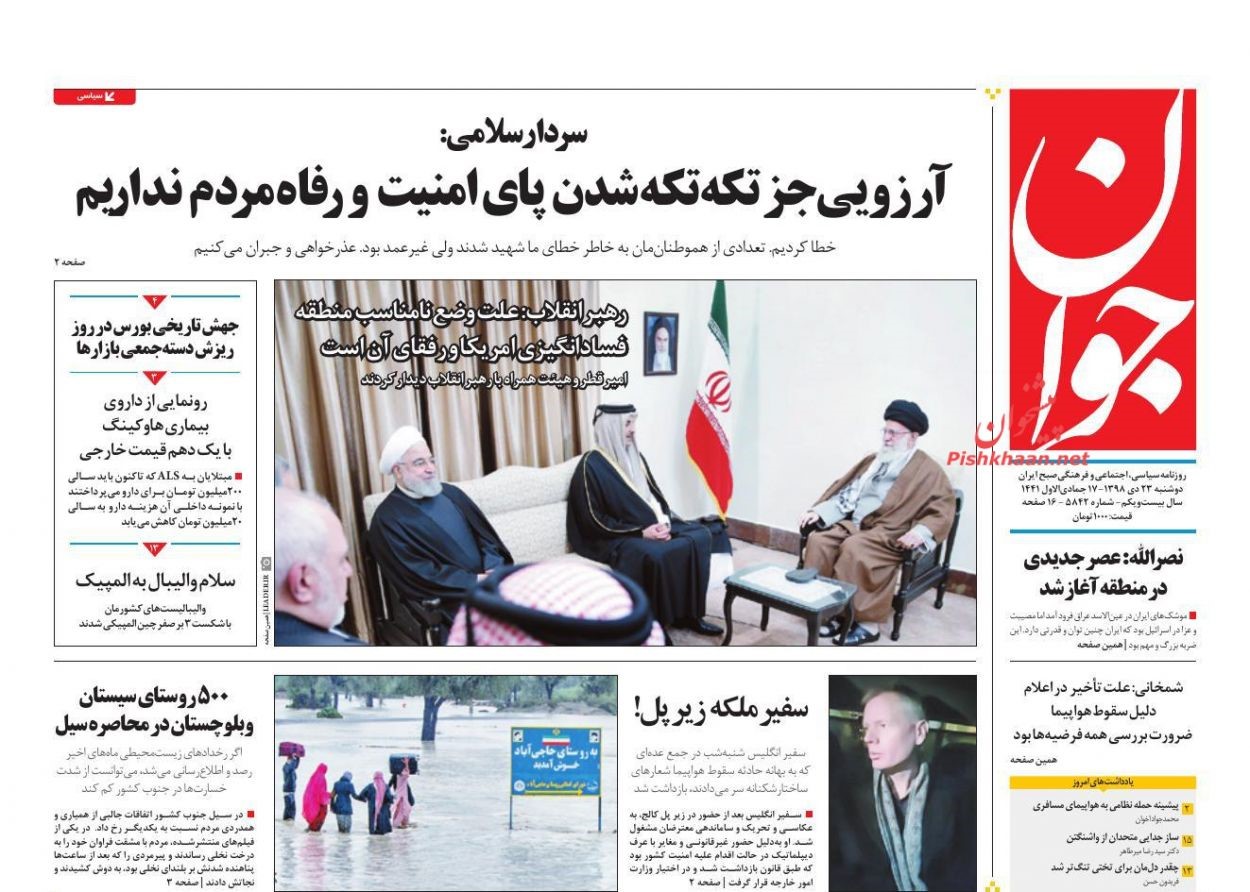 Celebrities Withdrawing from State-Run Fajr Festival One by One

* More than 30 filmmakers, artists and cartoonists said they would not participate in the Fajr festival, Iran’s equivalent of the Oscars, in April. It was an act of protest. "The only way out of the current situation is a crucial decision and straight talking by authorities with the people," they wrote in a statement. 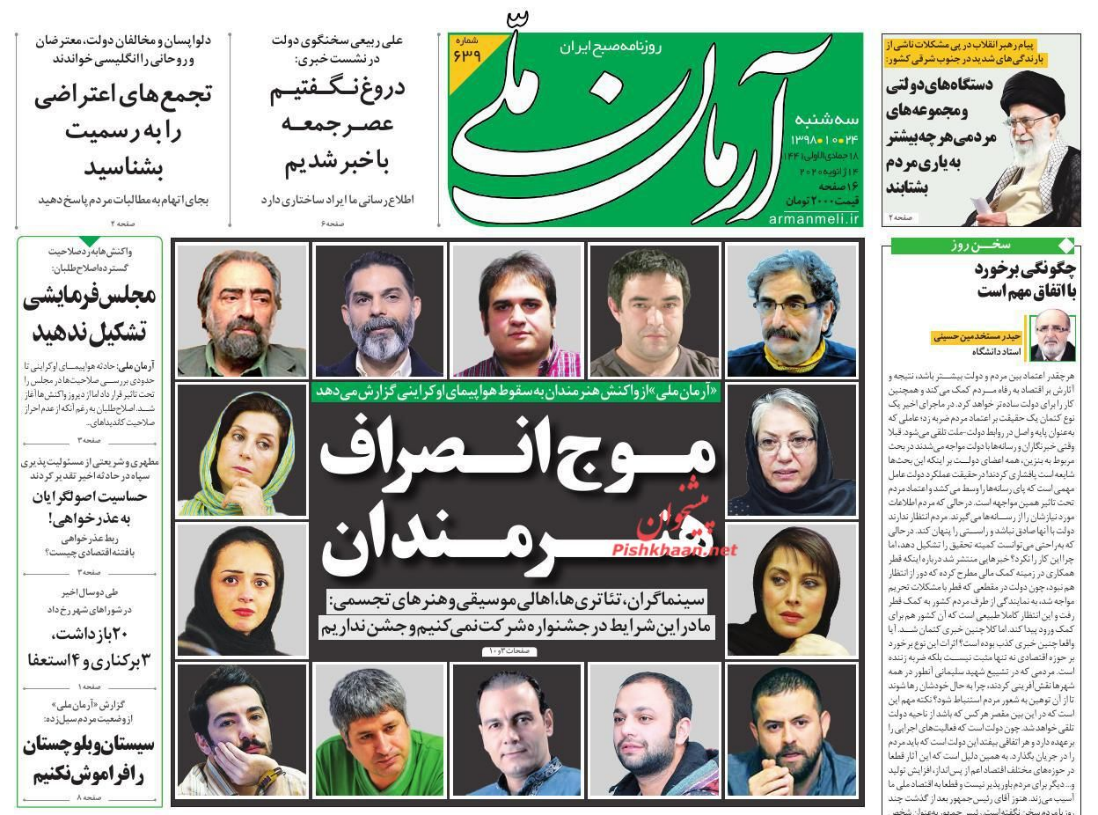