On January 8, Iran fired more than a dozen missiles at two Iraqi military bases housing U.S. troops in retaliation for the U.S. killing of Qassem Soleimani, the head of the elite Qods Force. Iran was quick to claim responsibility for the attack on U.S. forces. But its foreign minister also emphasized that Tehran did not seek war. In a tweet, Mohammad Javad Zarif said the strikes were “proportionate measures in self-defense.”

Iran took & concluded proportionate measures in self-defense under Article 51 of UN Charter targeting base from which cowardly armed attack against our citizens & senior officials were launched.

We do not seek escalation or war, but will defend ourselves against any aggression.

Minutes later, President Trump took to Twitter and implied that the damage to the al Assad and Irbil facilities was not serious.

All is well! Missiles launched from Iran at two military bases located in Iraq. Assessment of casualties & damages taking place now. So far, so good! We have the most powerful and well equipped military anywhere in the world, by far! I will be making a statement tomorrow morning.

The Pentagon did not report any casualties in its initial statement. Iranian television, however, claimed that 80 “American terrorists” were killed and that U.S. helicopters and military equipment were damaged. Iraq said none of its troops were harmed. Iraqi Prime Minister Adil Abdul Mahdi said Iraq received a verbal message just before the attack but was not informed of the exact location or targets. Iraq’s president, Barham Salih, condemned the Iranian missile bombardment and said “Iraq must not be turned into a battleground for the conflicting parties.”

Some U.S. officials thought Iran may have intentionally missed hitting American troops. "We could have done it and we didn't do it," is the message Tehran appeared to send, a State Department official told CNN. An Iranian diplomat told IranWire that Iran deliberately avoided harming U.S. personnel.

On January 16, U.S. Central Command issued an update on the damage. Eleven troops were injured the strike. Several were "treated for concussion symptoms from the blast," and eight transported to Germany or Kuwait for screening. On January 24, the Pentagon said that 34 U.S. service members had suffered traumatic brain injuries during the strike. President Trump had originally claimed that their injuries were “not very serious.” On January 28, the Pentagon increased the number of injured troops to 50. On February 11, the Pentagon announced that 109 service members were treated for traumatic brain injuries. Officials said that 76 of the troops had returned to active duty.

Supreme Leader Ayatollah Ali Khamenei said that Iran’s ultimate goal was to expel U.S. forces from the wider Middle East. “Military action like this is not sufficient. What is important is ending the corrupting presence of America in the region,” he said in a televised speech. As of January 2020, the United States had more than 5,000 troops in Iraq who were part of an international coalition to defeat ISIS. The United States had more than 60,000 troops deployed throughout the wider region, including Afghanistan, which borders Iran.

U.S. Troops in the Region 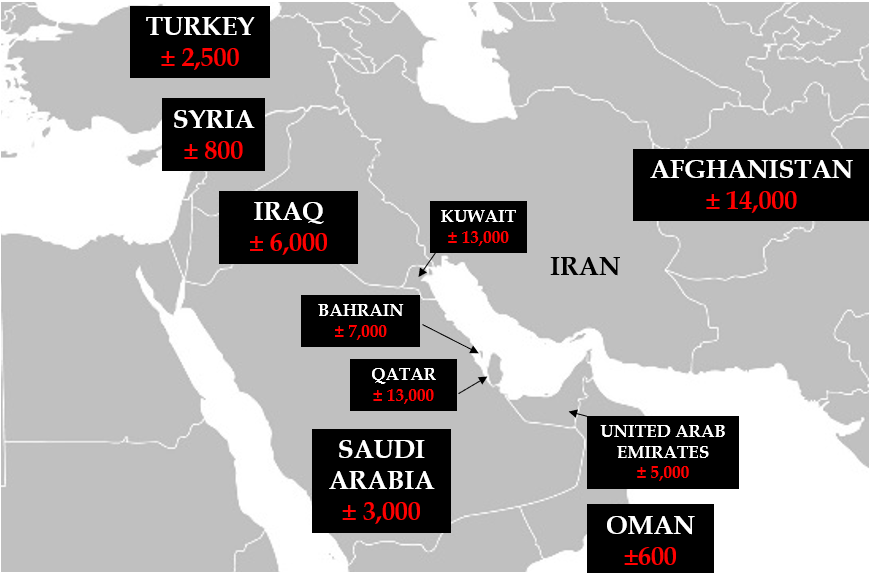 President Trump, in a televised address, said the United States would impose additional economic sanctions on Iran and continue to evaluate other ways to respond to Iran’s attack. He also called on the remaining parties to the 2015 nuclear deal – Britain, China, France, Germany, and Russia – to withdraw from the agreement and work toward a new, more comprehensive one. “We must all work together toward making a deal with Iran that makes the world a safer and more peaceful place,” he added. “The civilized world must send a clear and unified message to the Iranian regime: Your campaign of terror, murder, mayhem will not be tolerated any longer.”

But he also made an overture to negotiate with the Islamic Republic and suggested the two countries could work together on issues of common concern, such as ISIS. “The fact that we have this great military and equipment, however, does not mean we have to use it. We do not want to use it,” he said.

Iranian political and military leaders had pledged to take revenge for the killing of Soleimani, who had played a key role in Iran’s foreign military operations for decades. The secretary of Iran’s Supreme National Security Council, Ali Shamkhani, had warned that Tehran was considering a range of responses. “The Americans should know that until now 13 revenge scenarios have been discussed in the council and even if there is consensus on the weakest scenario carrying it out can be a historic nightmare for the Americans,” he told Fars News Agency on January 7.