At a time of horrific economic pressure resulting from U.S. sanctions, a recession, high inflation, and the mismanagement of its own finances, Iran could ill afford another blow to its stability. Now one has come in the form of a public health crisis caused by the coronavirus. On top of the 19 deaths and 139 infections reported so far—which could be an understatement from underreporting—the disease has shut down schools, universities, and some public spaces, likely sowing fear, political discontent, and mistrust.

The entire Middle East region could soon be affected by Iran’s role as an epicenter of this contagion.

It is difficult to say with precision how calamitous the situation is in Iran. Information regarding the extent of the casualties has entered the political arena, with one official claiming—though not reliably—that the death toll in one city alone, Qom, stands at 50. Even worse, Iranian authorities appear to have mishandled the outbreak. At first, they moved slowly and not very transparently in providing information and disseminating a strategy for confronting the spread of the disease. Thus far they have avoided placing entire cities or regions under quarantine. The lack of reliable medical equipment for early detection has been a bottleneck.

This public health crisis comes on top of other difficulties: U.S. sanctions, which have drastically curtailed Iranian oil exports; a deep economic recession and unemployment rate of close to 11 percent (youth unemployment is 26 percent); high inflation of 37 percent; and being put back recently on the Financial Action Task Force (FATF) blacklist, which has created new pressures in Iran’s foreign currency market. The impact of the coronavirus outbreak could be significant.

Iran’s economy is already in severe recession, with the International Monetary Fund currently projecting a contraction of 9.5 percent for the year 2019/20, which began on March 21, 2019 and ends March 20, 2020. The coronavirus epidemic may now aggravate matters, threatening the projected zero percent growth in 2020/21. The channels would be the following: 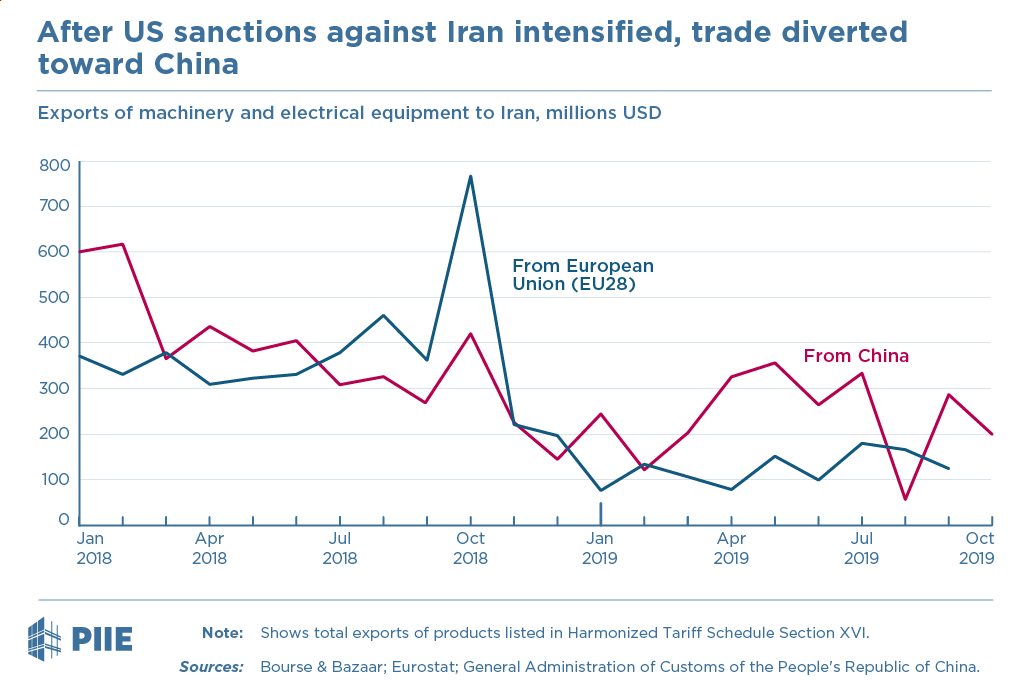 Regarding the broader implications for Iran and the region, public health crises in Iran have a long history. These have included the cholera epidemics of the 19th and earlier 20th centuries, which led to considerable loss of life. Mishandling of outbreaks contributed to significant political changes, including the constitutional revolution of 1905–11 (Afkhami 2019). As reported by Iranian media, the slow reaction by the Iranian government and the bottlenecks created by shortages of medical equipment have already become the focus of social discontent. To the extent that the pandemic becomes more widespread and the discontent with its management spreads, it could easily intensify that discontent, dragging the country through new political upheavals.

But Iran’s problems have a history of morphing into difficulties for others. The Middle East region will certainly be hit by a new round of downward pressure on oil prices on account of a decline in demand for oil by China and elsewhere. These difficulties would be compounded by the coronavirus outbreak in Iran, which could easily spill over to the geopolitics and economics of the already troubled Middle East region and beyond (Mazarei 2020). Interruptions in trade and border closures could easily exacerbate Iran’s already difficult relations with its neighboring countries, especially with Iraq, which relies heavily on trade with Iran, with important costs not only to Iran but also to the Middle East region as a whole. As policymakers around the world grope for ways to hold up the global economy, they now also need to factor in the implications of the coronavirus outbreak in Iran for already difficult economic challenges in the Middle East region.

Adnan Mazarei is a nonresident senior fellow at the Peterson Institute for International Economics.

This article was republished with permission from the Peterson Institute. The original can be found here.