But the United States has alleged that Iran’s space program serves as a cover for developing ballistic missile technology, in violation of U.N. Security Council Resolution 2231. “Each launch, whether failed or not, further allows Iran to gain experience using such technologies that could benefit its missile programs under the guise of a peaceful space program,” Secretary of State Mike Pompeo said on February 11. Iran had failed to put a communications satellite, the Zafar-1, into orbit on February 9. The setback came after three failed launches in 2019.

On February 12, Iran vowed to continue its space program despite international condemnation. “The satellite carriers have nothing to do with the subject of missiles, and constitute a completely non-defensive and non-military issue,” Defense Minister Amir Hatami said. Tehran announced that it would launch a Zafar-2 satellite into space by June 2020.

The following is the full text of the CRS report.

On January 7, 2020, Iran launched 16 short-range ballistic missiles that were fired from three different locations inside the country and hit various targets on two Iraqi military installations housing U.S. troops—Al Asad Air Base and an air base near Erbil in Northern Iraq. Experts argue that the attack served as both Iranian retaliation for the U.S. killing of Iranian’s top military commander, Major General Qasem Soleimani, as well as a warning to the United States against further military action against Iran. No U.S. or allied casualties were reported.

The majority of Iran’s heavy artillery rockets and ballistic missiles are tactical or short-range (less than 500 kilometers). Most of Iran’s ballistic missiles are Scud-B and Scud-C derivatives, with a majority likely being Scud-Cs. Iran has less than 100 SRBM reusable transporter-erectorlaunchers (TELs) and likely has hundreds of SRBMs. Iran views its SRBM capability as necessary for battlefield and tactical military purposes. Iran often test-fires these missiles as part of its military exercises. Iran’s SRBMs could strike U.S. and allied bases in the Gulf region if moved from their operating bases, as well as targets throughout Iraq, but they could not reach Israel.

Iran has grown increasingly self-sufficient in producing SRBMs, but still probably relies on outside sources, such as North Korea, for some key components and materiel. Stricter international enforcement of export controls and broadening missile-related sanctions—which are in place under the Iran nuclear agreement—have reportedly slowed Iran’s efforts.

The Qiam ballistic missile was first tested in August 2010, and continues to be operational. UN Reports and U.S. government reports released in recent years have highlighted escalations in both its use by Iran and transfer to regional forces allied with Iran. The Qiam was launched from Iran targeting ISIL fighters in Syria in June 2017, and modified versions of the SRBM have also been used in Yemen on several occasions in 2018. The Qiam rocket is road-mobile, liquid-fueled, and finless, and it is capable of achieving a range of 800 km.

The Fateh-110 is a solid-fuel, road-mobile battlefield or tactical ballistic missile with a range of about 250-300 km. There may be four versions of the Fateh-110 in service; one is apparently called the Khalij-Fars (“Persian Gulf”).

Iran is developing and producing MRBM capabilities with ranges estimated up to about 2,000 kilometers (some nonU.S. government sources cite slightly higher ranges), sufficient to strike targets throughout the Middle East.

According to the National Air and Space Intelligence Center (NASIC) in 2017, Iran has perhaps fewer than 50 MRBM launchers and an unknown number of associated missiles. Iran continues to develop, test, and build more capable and increasingly accurate MRBMs. Iran argues these missiles constitute an important deterrent and retaliatory force against U.S. and other forces in the region in the event of war. Iran has also constructed an underground network of bunkers and silo-like missile launch facilities, and is seeking improved air defenses, presumably to enhance the survivability of their MRBMs against preemptive attack.

Like the SRBM program, Iran relies to some extent on others, particularly North Korea, for certain key missile components and materials in its MRBM program. Export controls and sanctions have made it increasingly difficult, but not impossible, for Iran to acquire the best of such items, causing Iran to try to exploit weaknesses in existing export and nonproliferation regimes, or to try to find foreign sellers willing to circumvent those laws.

The Shahab-3 is a ballistic missile imported from the DPRK and based on the No-dong 1. The Shahab-3 has been given various names by Iran and others over time. There reportedly have been several different versions of this liquid-fueled missile flight tested with various other modifications made to it, perhaps providing the Shahab-3 with ranges varying from about 800-1,000 km. The missile is reportedly both road-mobile and silo-based. Because the range of the Shahab-3 lies at the low end of an MRBM, Iran has sought to develop, test, and deploy a much longer-range ballistic missile. Iran’s first efforts in extending the range of the Shahab-3 manifested in what some have variously referred to as the Ghadr-1. The Shahab-3 variant is roadmobile, liquid-fueled, and single-stage, and it is believed by some experts to carry a smaller payload and a modified reentry vehicle (RV). Modified Ghadr MRBMs were reportedly tested in March 2016. The Emad, which began being publicized in 2015 as a longer-range MRBM, appears to be a Ghadr variant with a modified RV.

The Sajil (also transliterated Sejil/Sejjil) is a solid-fueled, two-stage, ground-mobile ballistic missile that Iran says has a range of about 2,000 km, according to official U.S. sources. This MRBM was first announced under the name Ashoura in November 2007, but either the missile or the solid propellant motor tested unsuccessfully at the time. Subsequently renamed the Sajil, it was flight tested successfully in November 2008. Additional tests of the Sajil or a modified and apparently more capable version of it, the Sajil-2, took place in May, September, and December 2009. The Sajil-2 has since highlighted significant progress in Iran’s solid-propellant program, which could afford Iran’s missiles reduced response time and risk of detection. 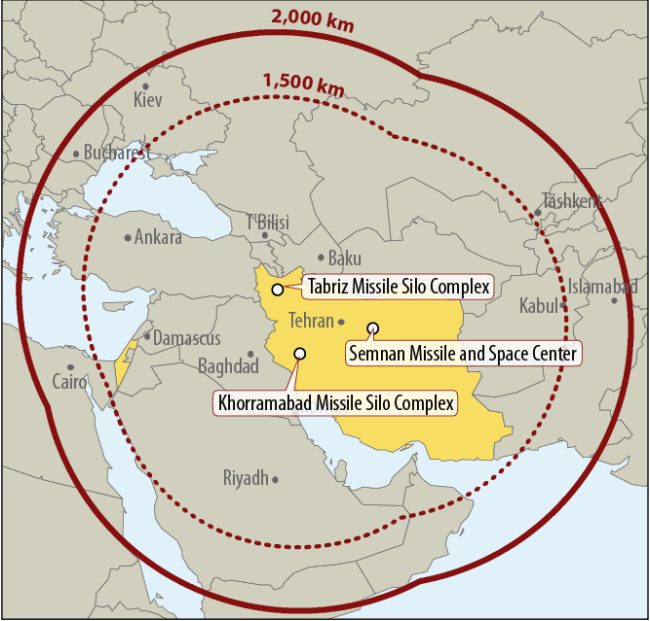 Iran has an ambitious space launch and satellite program and has stated that it plans to use future launches for placing intelligence-gathering satellites into orbit, although proliferation experts assess such a capability is likely a decade or so in the future.

Iran used the Safir SLV to launch the OMID satellite into orbit in February 2008. The Safir SLV used a first stage based on the single-stage Shahab-3 with a specially designed second stage. Iran still develops this liquid-fueled SLV. The Safir is designed to carry a light payload into low-earth orbit and as such is not considered to be capable of providing a long-range nuclear weapons capability. The Safir-1B is the second-generation Safir SLV capable of putting a 60 kilogram payload into low-earth orbit.

A more powerful rocket was displayed as a mockup in 2010 and named the Simorgh, which is designed to carry heavier satellites into orbit using four main engines. Having postponed its first launch for several years, the design may have undergone various modifications. Iranian state media claimed on July 27, 2017, that a Simorgh launched from the Imam Khomeini Space Center, a newly built space complex in southeastern Iran, placed a 250 kilogram satellite into low-earth orbit. Some U.S. media reports at the time indicated the Simorgh exploded shortly after launch and there is no evidence it achieved orbit.

Some have long believed Iran’s space launch program could mask the development of an intercontinental ballistic missile (ICBM) with ranges in excess of 5,500 km that could threaten targets throughout Europe, and even the United States (at least 10,000 km). According to the intelligence community (IC) in 2018, “Tehran’s desire to deter the United States might drive it to field an ICBM. Progress on Iran’s space program, such as the launch of the Simorgh SLV in July 2017, could shorten a pathway to an ICBM because space launch vehicles use similar technologies.”

ICBMs share many similar technologies and processes inherent in a space launch program, but many years ago Iran outlined a long-term dedicated space launch effort (that has since slowed considerably) that is not simply a cover for ICBM development. In addition, no country has developed an ICBM from its space launch technology base; space launch programs have generally developed from military ballistic missile programs.

In 1999, the IC first assessed that Iran could test an ICBM by 2015 if it received sufficient foreign assistance, especially from a country such as China or Russia. CRS assessed in 2012 that it was “increasingly uncertain whether Iran will be able to achieve an ICBM capability by 2015 for several reasons: Iran does not appear to be receiving the degree of foreign support many believe would be necessary; Iran has found it increasingly difficult to acquire certain critical components and materials because of sanctions; and Iran has not demonstrated the kind of flight test program many view as necessary to produce an ICBM.”

Although not representing the IC, Adm. Gortney (Northern Command) seemingly updated the U.S. government assessment, stating on March 10, 2016: “Iran has successfully orbited satellites using its ICBM-class booster as early as this year. In light of these advances we assess Iran may be able to deploy an operational ICBM by 2020 if the regime chooses to do so.”