Six weeks after the first COVID-19 deaths, President Hassan Rouhani said that Iran was successfully containing the outbreak. “Fortunately, the statistics I read last night from all the provinces shows a downward trend in all provinces,” he said at a cabinet meeting on April 1. Rouhani claimed that Iran’s increasingly stricter travel restrictions and social distancing curbed infections without resorting to a stringent lockdown as seen in Wuhan, China, where the disease originated. “Although it was a very difficult task for all of us, these decisions were made for the health and well-being of the people,” Rouhani said. “In total, we have 6,800 ICU (intensive care unit) beds, 4,000 of which are currently occupied, and the rest are empty,” he added. Rouhani’s optimistic tone starkly contrasted with media reports that Iran’s healthcare system was severely overstretched.

Rouhani also lauded his government’s response to the economic fallout. “I would like to tell our deal people that despite sanctions, hardships and problems, we set aside about $10 billion to remove barriers to businesses that were in trouble,” Rouhani said. “Part of that will be in loans, part in grants and part in packages paid to families and people in need.” 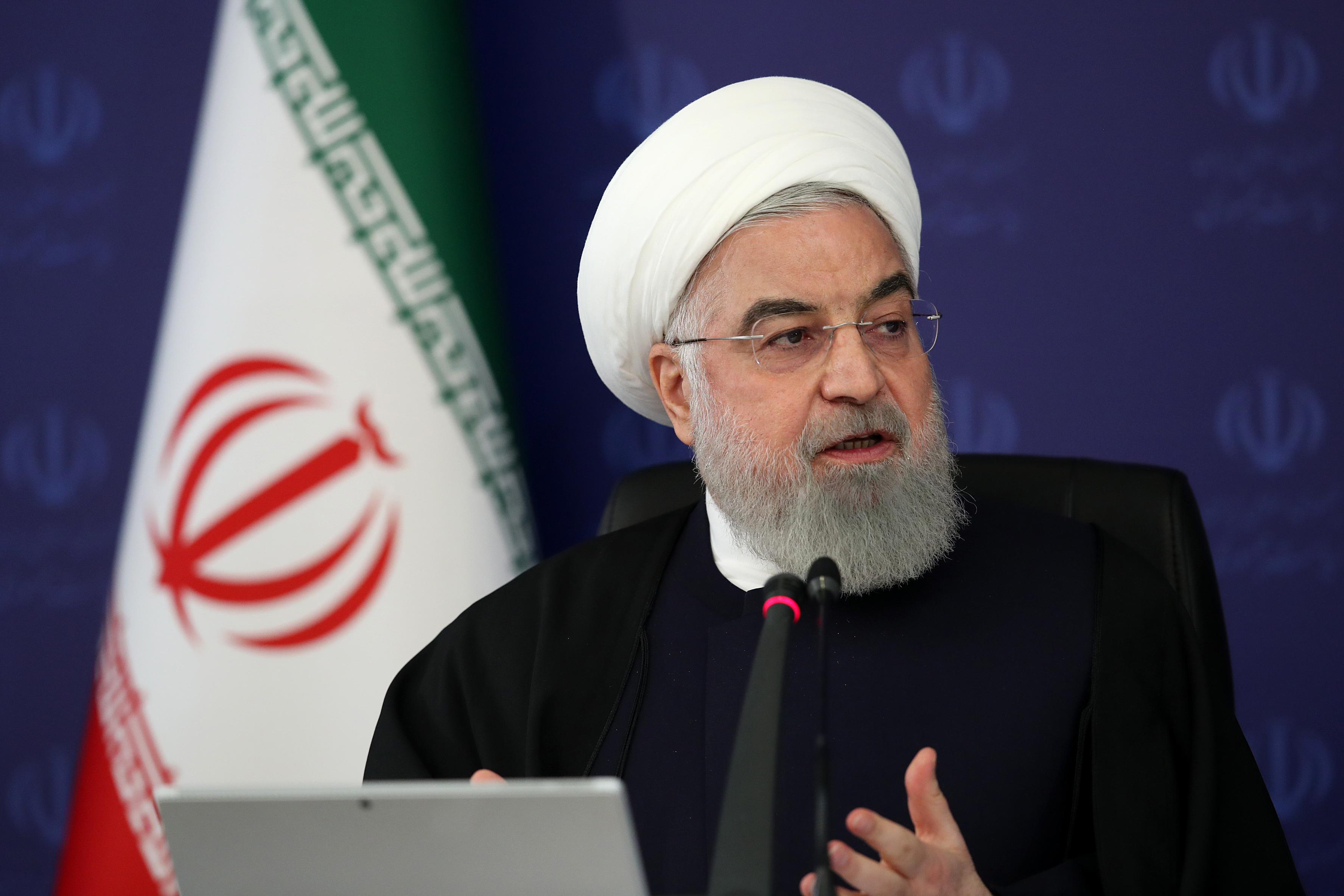 The president also criticized the United States for not easing sanctions on Iran during the crisis. He and other Iranian officials had argued that sanctions were impeding Iran’s ability to procure badly needed medical supplies. “It was the best historic opportunity for Americans to return from their wrong path and once again tell their nation that they are not against the Iranian people,” Rouhani said. “They have always acted against the Iranian nation, but today their animosity towards the Iranian nation is more obvious.” The following is a partial translation of his remarks from Rouhani’s website.

People used to celebrate the last day of Nowruz holidays every year, but this year they chose to stay home and leave going to nature for the future because of their health and well-being, as well as their loved ones.
Again, we should thank our good and dear people for observing all the health protocols, both at the beginning of the year and the Nowruz holidays, and at the end of the Nowruz holidays so far in most of the provinces today.

Fortunately, the statistics I read last night from all the provinces shows a downward trend in all provinces, and it was a great pleasure for me to see that the path our doctors, specialists and people chose was the right path.

Many tourist and entertainment centers were closed. Schools and universities were closed and the authorities' invitation was well received. Today we saw the Minister of Roads and Urban Development announce that people's travel by train decreased by 94 percent, buses by 75 percent, and airplane by 70 percent, and overall travel declined substantially in the first days of Nowruz.

Although it was a very difficult task for all of us, these decisions were made for the health and well-being of the people, and when we saw that we had to be stricter, we made a decision on March 25 to assign the social-security committee to review the matter.

The same day we made the necessary decisions and announced to the public, we started the second phase of Social Distancing program, which was stricter on the people but at the same time the people cooperated and we had a 30 percent reduction in travel.

Different countries have adopted different approaches to this issue. Of course, we used the experience of all countries, but we never limited ourselves to their approach. From the very early days that the virus began, some have been proposing to implement Chinese model of quarantine.

No one in the world liked this model and no one implemented it. It was not implemented in any country and could not be implemented. It was their own model. With their policies and social conditions, they can tell people to seal the door for 15 to 20 days. But this is not possible in Iran and in any other country. So no one followed it, and so did we.
Some people inside the country pushed us to run the Chinese model and we didn't. There was one model that some European countries started in the early days, and some of abandoned it, which was collective security.

They said we do not care if the virus and some people get infected and some go to the hospital, some get well and it doesn't affect anyone, and it goes through a month, two months, some get sick, some die and it passes. This was one way we didn't follow, they continued this way for a while, and they got into trouble with it.

But at the same time, what our experts were looking for from the outset was a program designed for Iran and the Ministry of Health responsible for it, we implemented different program step by step at different stages.

Of course, with each passing day, in the last 12 days, we have taken a new step and made things a little stricter. Our dear people must know that all these actions were for the sake of their health and well-being.

Yesterday we made a decision that might make things a little bit stricter. We decided that anyone who got the virus, himself, his family and his workplace would necessarily have to be informed about it, although it might be in contrast with some instructions. Some of this information is confidential patient information and must not be disclosed elsewhere, but we made the decision yesterday for the sake of public health and are subject to legal penalties if anyone violates it.

Here, I want to tell people an important point. With the help of doctors, nurses, medical staff who had been working since day one and made sacrifices, and saved our people, we took the pessimistic approaches from the first days and mobilized all facilities of the Armed Forces and called on them to bring 4,000 hospital beds, which are all empty, God-willing. This is one of the beautiful display of this work.

In Tehran and big cities, our Armed Forces have worked hard and prepared large resorts with thousands of beds, the beds are so beautifully decorated, but they are left empty with the same beauty.

Although some western countries had more time than we did when we were infected, they were affected 10, 15 days after us and had more time but they were short of beds, respirators and ventilators. They forced their factories to stop everything and start producing ventilators.

They were short of both food and their hospitals have trouble supplying masks. Yesterday a US official said that these N95 masks that nurses and doctors wear will be disinfected at the end of the day and will be used again tomorrow! He was a political official and didn't have much expertise, saying that they would use a mask for up to 20 days because we didn't have a mask to produce.

When the big industrial and promising countries had trouble passing this test and our nation did not, it was because of cohesion, good management, skilled medical staff, precision and diligence, and they all came together and made this good situation happen.

These days, our production sector has done a great job of meeting the needs of both the hospital and the people. At this very cabinet meeting, the minister announced that the production of disinfectants has doubled in the past few days, with the private sector also adding to it.

Mask production in the public sector has quadrupled. Many private sectors are also producing masks themselves.

The hospital mask needed, N95, is sufficiently manufactured in both the private and public sectors.

Ventilators are sufficiently manufactured and provided to hospitals in the country and we have no problems whatsoever, as well as the other protective clothing and gowns our nurses and doctors need, and the diagnostic kit announced today for the laboratory, both private and public sector can produce as much kits as they want and make it available to the labs.

So, a great deal has been done all over the country. We all went hand in hand and we did it.

Since today is the end of the Nowruz holidays, I have to reiterate that since the early days, we have worked to fix the problems of the 10 categories of businesses whose businesses have been affected.

These are either categories that relate to people's travel and leisure, or to other areas such as transportation and all the categories that failed to work at this time, such as restaurants and hotels.

I would like to tell our deal people that despite sanctions, hardships and problems, we set aside about $10 billion to remove barriers to businesses that were in trouble. Part of that will be in loans, part in grants and part in packages paid to families and people in need.

I think our great nation these days has given a very decisive response to all the nonsense that have been propagating for months in their own media, foreign media, satellites and cyberspace, suggesting that the Iranian nation is tired, has fallen back, and the Iranian government and system are ineffective.

Compare Iran today with the advanced countries of the world and see how our country has performed in this test, a strong response was given to the perpetual liars who still continue these lies. They find themselves in a country where they don't have enough hospital beds for their patients, and they do not dare to go out of the media, fearing and lying again and saying inappropriate things about Iran.

The last thing I want to emphasize is the Americans' malignancy. They imposed sanctions on us in this conditions for whatever reason. Their sanctions were wrong, cruel, incorrect and illegal. But still in this particular situation, which themselves know that coronavirus is not specific to one country and the world is almost interconnected, if 10 countries fight against coronavirus but one doesn't, it will be spread twice as much and to twice as many countries. It is a global business.

Unfortunately, the Americans did not learn a lesson in these harsh global conditions, they did not understand what to do. It was a good time, it was a time to apologize for their wrongdoing. This is a humanitarian issue; no one would blame them for retreating. It was the best historic opportunity for Americans to return from their wrong path and once again tell their nation that they are not against the Iranian people. They have always acted against the Iranian nation, but today their animosity towards the Iranian nation is more obvious.

All our doctors, our beloved nurses and all who are working hard have done a great job, and in the coming days, God willing, our work must double. We have to make up. We know that some of the businesses have been in trouble, I hope that God will help us.

Last but not least, authorities should increase price monitoring. Some businesses are closed these days, but the conditions will be over, shops will open and everyone will start work and purchases will be made. These days when pressure has increased a bit and some businesses are closed, others must not be allowed to abuse and raise prices so our people can live their lives in the best possible conditions.

May God help us in this blessed month of Sha'ban and then in the month of Ramadan that we have ahead of us.