As commander of Iran’s elite Qods Force, Qassem Soleimani has become one of the most powerful military leaders in the Middle East. He has reportedly masterminded major military operations, bombings and assassinations since he took over the external operations wing of the Islamic Revolutionary Guard Corps (IRGC) in 1998. 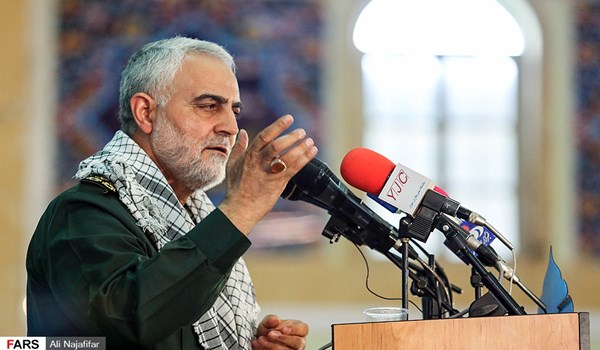 Once described as a “shadow commander,” Soleimani has become more visible—in foreign deployments, public events, even in selfies—as Iran has widened its influence in the Levant and the Gulf. He has appeared with Shiite militias fighting ISIS militants in Iraq and Syria and granted several interviews to Iranian television channels. Soleimani had an Instagram account—with 800,000 followers—until the account was banned in April 2019 after the United States designated the IRGC as a Foreign Terrorist Organization.

Soleimani was born in 1957 in a poor farming village in eastern Iran. He joined the newly formed Revolutionary Guard after the 1979 revolution and spent his twenties serving in the Iran-Iraq war. He was appointed to head the Qods Force in 1998; he has orchestrated Iran’s rise as a regional power ever since. The following are excerpts from public remarks by Soleimani by topic.

“The IRGC has expanded the resistance in terms of both quantity and quality. It has expanded the resistance from a geographical territory of 2,000 square kilometers in southern Lebanon to a territory of half a million square kilometers…America and the Zionist regime concentrate their efforts on stopping this qualitative expansion. The second point is that the IRGC has created territorial continuity for [the different parts] of the resistance. It has connected Iran to Iraq, Iraq to Syria, and Syria to Lebanon.”

“Since the beginning of the Revolution, our victories in all fronts were guaranteed by adherence to Imam Hussein’s culture, and we have won many victories as a result of this path. This front is founded on the reliance on Imam Hussein, the Prophet’s family, and the Imams and their companions.

“Today, you can witness it being reborn every day. Yesterday, it had a branch only in Iran. Today, it has branches in many [locations] as a result of this reliance. Today, Ansar Allah in Yemen are following the path of Imam Hussein and his household. Today, the [Iraqi] PMU is also getting inspiration and the power of resistance from this valuable position.”

“If the world of Islam feels that it possesses a powerful deterrence today, it is due to the existence of two important, strong, and Islamic-based forces created in Lebanon and in Palestine: Hezbollah and Islamic movements like Hamas, the Islamic Jihad, and the rest of the Palestinian Islamic groups.”

“Our nation helped the Iraqi nation to uproot the Baath Party. Our nation uprooted the greatest danger of all – the evil of ISIS and the takfiris. In the words of our leader, this was done in the service of humanity. You saw how helpless the Europeans were in dealing with them. Our nation came to the rescue of the other nations.”

"You saw how Hezbollah, a small organization that was not afraid, an organization that learned from our Imam and our nation not to be afraid, gave such a slap to an enemy armed to the teeth, which poses a danger to the Islamic world. All the Arab countries together could not confront this enemy, but [Hezbollah] defeated it and put it in its place, and today, that enemy does not have the courage to attack any Muslim country.”

On the U.S. role in the Middle East

“But after the 9/11, due to the two heavy military actions the U.S. exercised, about 40  percent of the armed forces in the disposition of the U.S. entered our region; and later gradually as a result of the changes and exchanges done, even reserve and standby forces as well as the national guard got involved. That is to say, approximately over sixty percent of the U.S. Army, including internal and extraterritorial forces were deployed to our region. Therefore, there was a dense presence in a limited area: in Iraq alone, there were more than 150,000 troops, and over 30,000 U.S. militaries were present in Afghanistan.”

“Yet, this excluded the coalition forces which were about 15,000 in Afghanistan. Thus, a 200,000-member, specialized and trained force was present in our region, next to Palestine. This presence naturally provided opportunities for the Zionist Regime. That is, the presence of the U.S. in Iraq was an obstacle to the dynamism of the Syrians in Syria, as well as a threat to the Syrian government, and a threat to Iran.”

“Look at the American forces today. They are more than one million strong. But despite their numbers and their capabilities, they are cowards. When they arrived in Iraq, they brought diapers for their soldiers, so that they could urinate in them when scared. You, on the other hand, have achieved victory with light weapons, Why? Because you are willing to make sacrifices.”

“[Former Israeli Prime Minister Ehud Olmert] said that for the first time all the Arab countries [had reached a consensus]. By all Arab states, he meant the majority of the Arab countries, namely, the Cooperation Council for the Arab States of the Persian Gulf was, in particular, considered. Egypt was also included, and other countries were generally not exceptions…The remarks he made reveal a fact, an important serious reality...the willingness of Arab countries and their discreet announcement of cooperation with the Zionist Regime for obliterating Hezbollah and changing the demography in southern Lebanon”

“Saudi Arabia has foreign currency reserves to the tune of $1,000 billion. But today, there is a powerful movement that is based on Islam, which has confronted this financial power – this bank full of money – and has defeated it. They have operated for four years and have spent billions of dollars against the poor and oppressed [Houthi] Ansar Allah organization, but they are paralyzed, despite all their financial coalitions…

“The influence of Saudi money has infiltrated Pakistan. Along with behind-the-scenes involvement of the Zionist regime and Wahhabism, their goal is to shatter Pakistan to smithereens. The Pakistani army must not let this happen.”

"I've said many times with regard to Egypt... People who seek ties of any kind with America should learn the lesson. It is crystal clear. It is as bright as the sun, as clear as day. The countries under the control of America, America's allies, have surrendered everything to America – their reputation and their dignity.

“Take a look at their situation. They do not suffer from economic sanctions, they have ties with the whole world, America and the West support them... These countries used to have very high standing in the Arab world, and enjoyed the upper hand in the Islamic world too, but today, they are disappearing from the historical scene. They have become like a beggar, running after some tiny rich countries. They are selling out their own islands, their own countries.”

“The U.S. President, in response to statements by our president, made some idiotic comments on Twitter. It is beneath the dignity of the president of the great Islamic country of Iran to respond, so I will respond, as a soldier of our nation. You threaten us with a measure that the world has not seen before.

“First of all, it has been over a year since Trump became U.S. President, but that man's rhetoric is still that of a casino, of a bar. He talks to the world in the style of a bartender or a casino manager. When he talks to China, to Russia, to Europe, or to anyone in the world, one feels that a gambler is talking.”

“Later, based on two circumstances, we concluded that prior to this war, a swift ambush was supposed to be conducted to overturn Hezbollah. Well, this war happened when two important events, one concerning the entire region and another exclusively concerning the Zionist regime were taking place.”