Iran has expanded its military capabilities and is poised to purchase more advanced weapons starting in 2020. Tehran’s “combination of lethal conventional capabilities and proxy forces poses a persistent threat” to U.S. interests and allies in the Middle East, according to a new Defense Intelligence Agency (DIA) report. “In more recent years, with the conflicts in Syria and Iraq, Iran has taken nascent steps toward developing a limited expeditionary capability. Iran’s conventional forces are now in the regional power projection game as well.”

Since 2010, Iran’s ability to import weapons has been constrained by an arms embargo. “Under U.N. Security Council Resolution 2231, Iran is prohibited from procuring most types of conventional weapon systems from abroad,” said senior analyst Christian Saunders. “However, these restrictions are set to expire by October 2020, providing Tehran with the opportunity to acquire some advanced capabilities that have been beyond its reach for decades.”

The DIA assessed that Tehran is likely to field new land-attack cruise missiles, improve its naval surface warfare capabilities, and acquire fourth-generation aircraft and advanced unmanned aerial vehicles. Iran will likely “go after fighters” as “their current air force is dated,” according to the Pentagon. The DIA warned that Iran was “already evaluating and discussing military hardware for purchase primarily from Russia and, to a lesser extent, China.” Iran has shown interest in Russia’s advanced S-400 air defense system.

“Throughout its 40-year history the Islamic Republic of Iran has remained opposed to the United States and our presence in the Middle East.  Iran projects its military power through two different military institutions: the regular forces, or Artesh, and the Islamic Revolutionary Guard Corps, or the IRGC.  These organizations serve two important strategic goals for Iran: first, the survival of the regime; and second, securing a dominant position in the region.

“Iran employs a hybrid approach to warfare using both conventional and unconventional elements.  On the conventional side, Iran's military strategy is primarily based on deterrence and the ability to retaliate against an attacker.  Iran also uses unconventional warfare operations and a network of militant partners and proxies to enable Tehran to advance its interests in the region, as well as attain strategic depth.

“The Iranian military largely relies on three core capabilities: first is ballistic missiles; the second are naval forces capable of threatening navigation in the Persian Gulf and the Strait of Hormuz; and the third is unconventional capabilities including the use of partners and proxies abroad. 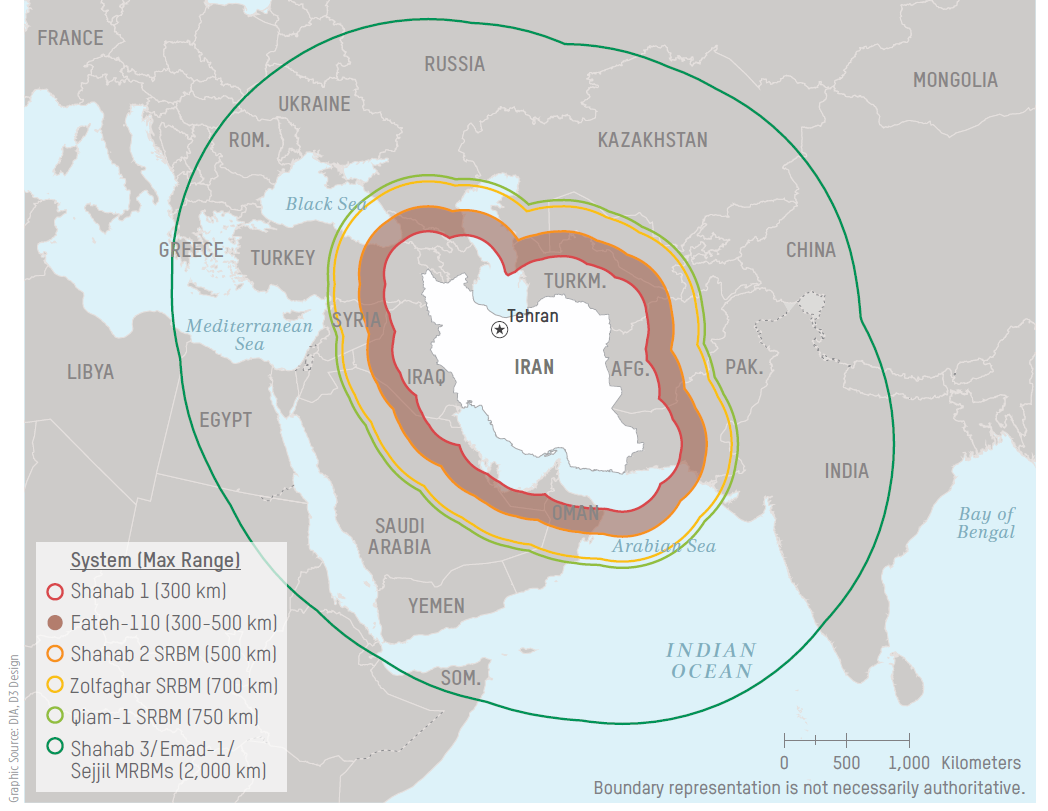 “Iran's use of partners, proxies and unconventional warfare is central to its regional influence and deterrent strategy.  The IRGC Qods Force, Iran's primary tool for unconventional operations, maintains a wide network of non-state partners, proxies and affiliates throughout the region.  Iran provides a range of financial, political, training and material support to groups which would include Hezbollah, Iraqi Shia militant groups, the Houthis in Yemen, some Palestinian groups, the Taliban and Bahraini Shia militants.

“Another point of concern to the United States and our allies is Iran's rapid progress in advancing its UAV capabilities.  Iran sees these as versatile platforms for a variety of missions, including Intelligence, Surveillance and Reconnaissance, or ISR, and air-to-ground strikes and has steadily expanded its UAV inventory.  Iran has deployed various armed and unarmed UAVs to Syria and Iraq for ISR and strike missions.

“Iran is also strengthening its integrated air defense systems through domestic production as well as foreign acquisition.  Iran is fielding more capable domestically developed surface to air missiles and radar systems, and in 2016, acquired the Russian SA-20C air defense system, which provided Iran with its first capability to defend itself against a modern Air Force.

“In the cyber domain, Tehran views cyberspace operations as a safe, low-cost method to collect information and retaliate against perceived threats, and Iran's regime is continuing to improve its cyber capabilities.
“Iran has no nuclear weapons but its nuclear program remains a significant concern for the United States.  Earlier this year, Iran began a counter-U.S. maximum pressure campaign, which has included gradually exceeding some of the nuclear related limits stipulated in the Joint Comprehensive Plan of Action, or JCPOA.  In early July 2019, the IAEA first confirmed that Iran had exceeded some of its JCPOA limits.  Tehran has threatened to continue ceasing other JCPOA commitments unless it released - unless it receives sufficient sanctions relief.

“Iran's military strategy, as I said earlier, is focused on deterrence and is unlikely to change considerably in the near term, but Iran has taken steps towards developing a limited expeditionary capability through its operations in Syria and Iraq.

“The IRGC Qods Force and its network of proxies will remain critical to Iran's military power and Tehran will also improve its conventional forces in seeking new capabilities.  Iran's current modernization plans emphasize a broader range of conventional capabilities than in the past.

“Iran probably will continue to focus on the domestic development of increasingly capable missiles, naval platforms and weapons, and air defenses while it attempts to upgrade some of its deteriorating air and ground capabilities primarily through foreign purchases.

“Under U.N. Security Resolution 2231, Iran is prohibited from procuring most types of conventional weapons systems from abroad.  However, these restrictions are set to expire in October 2020, providing Tehran an opportunity to acquire some advanced capabilities that have been beyond its reach for decades.

“As Tehran expands its capabilities in role as both an unconventional and conventional threat in the Middle East, it is more important than ever that we understand Iran's military power and the threat it poses to our interests, our allies and our security

“Following a significant increase in Iranian defense spending from 2014 to 2018 after the implementation of the JCPOA [2015 nuclear deal], Iran’s security forces have experienced a funding decrease in 2019. Key drivers of this defense budget decrease include the reimposition of U.S. oil and banking sanctions, the depreciation of the Iranian rial, and chronic economic mismanagement.

“Iran’s official defense budget for 2019 is approximately $20.7 billion, roughly 3.8 percent of gross domestic product (GDP), as passed by the Iranian Majles…the decline in funding for 2019 is similar to the decrease following the implementation of multilateral oil and financial sanctions in 2012. Iran’s current defense funding may face further cuts as Iranian oil export revenue continues to decline.”

“Iran will deploy an increasing number of more accurate and lethal theater ballistic missiles, improve its existing missile inventory, and field new LACMs. It will also pursue technical capabilities that could enable it to produce an ICBM.”

“Iran will continue to improve the accuracy and lethality of some of those systems and will pursue the development of new systems, despite continued international counterproliferation efforts and restrictions under UNSCR 2231. Iran is also extending the range of some of its SRBMs to be able to strike targets farther away, filling a capability gap between its MRBMs and older SRBMs.”

“Iran’s more-accurate systems are primarily short range, such as the Fateh-110 SRBM and its derivatives. Iran’s longer-range systems, such as the Shahab 3 MRBM, are generally less accurate. However, Iran is developing MRBMs with greater precision, such as the Emad-1, that improve Iran’s ability to strike distant targets more effectively. Iran could also complicate regional missile defenses by launching large missile salvos.”

“Iran operates a diverse array of SAM and radar systems intended to defend critical sites from attack by a technologically superior air force. Operational since 2017, Iran’s Russian-provided SA-20c long-range SAM system is the most capable component of its integrated air defense system (IADS).”

“The IRGC— designated as an FTO [Foreign Terrorist Organization] by the United States—consists of ground, naval, aerospace, and unconventional components, which in total number about 190,000 personnel. Including the estimated active personnel from Iran’s paramilitary reserve force, the Basij, the IRGC numbers roughly 640,000 personnel.”

“The IRGC runs numerous private companies— most notably the wide-ranging Khatemolanbia (“seal of the prophets”) Construction Headquarters—and exploits its far-reaching political and social influence to raise additional revenue. The IRGC and IRGC-QF can also gain extra income through smuggling and other illicit activities in the region.”

“Iran also distributes funding to its many partners and proxies, expenditures not fully accounted for in the official budget. Between 2012 and 2018, Iran provided more than $16 billion to the Syrian regime, Hizballah, Iraqi Shia militias, the Huthis, and Palestinian groups.”

“Hizballah maintains a stockpile of approximately 120,000– 150,000 rockets, a massive expansion in capability compared with the approximately 13,000 it had available during the 2006 conflict. Hizballah has an estimated 45,000 fighters, divided between as many as 21,000 full-time personnel and a 24,000-person reserve force.”

“During the counter-ISIS campaign, [Iraqi] Shia militias staffed more than 50 PMF brigades under the PMC. There are an estimated 75,000–145,000 mainly Shia fighters active in more than 35 Iraqi militias.”

“Compared to more technologically advanced states, such as the United States, China, and Russia, Tehran’s offensive cyberspace capabilities remain underdeveloped. Although accounts of Iranian hacking first emerged in the early 2000s, state-sponsored cyberspace activities did not appear publicly until 2007. Prompted by the 2010 Stuxnet cyberattack on Iran’s nuclear centrifuges, Iran recognized the need to develop its cyberspace capability as a strategic priority.”

“Tehran claims to have developed sophisticated capabilities, including SLVs [satellite launch vehicles] and communications and remote sensing satellites. Iran’s simple SLVs are only able to launch microsatellites into low Earth orbit and have proven unreliable with few successful satellite launches... Iran initially developed its SLVs as an extension of its ballistic missile program, but it has genuine civilian and military space launch goals.

“Iran has conducted several successful launches of the two-stage Safir SLV since its first attempt in 2008. It has also revealed the larger two-stage Simorgh SLV, which it launched in July 2017 and January 2019 without successfully placing a satellite into orbit.”