U.S.-Iran: History of Overtures and Confrontations

Since the 1979 revolution, Washington and Tehran have gyrated between hostile actions and diplomatic overtures. Relations have never recovered from the seizure of the U.S. Embassy and 52 diplomats. The U.S. attempted military action to end the drama but eventually turned to diplomacy. Since then, the Islamic Republic has been linked, directly or indirectly, to the deaths of hundreds of Americans, while the United States has been responsible for the deaths of hundreds of Iranians. Yet both countries have also dabbled in bold outreach, with mixed results.

In the mid-1980s, the Reagan Administration secretly dispatched top U.S. officials to Tehran to broker an arms-for-hostages swap. But tensions flared when Iran dropped mines in the Persian Gulf and the U.S. Navy disabled eight Iranian navy vessels. In the 1990s, the Clinton Administration linked Tehran’s allies to the Khobar Towers bombing in Saudi Arabia. After Iran’s president offered a “dialogue of civilizations” to bring down “the wall of mistrust,” Washington countered by lifting minor sanctions. In the 2000s, the George W. Bush Administration worked with Tehran to replace the Taliban. But it later labeled Iran one of three countries in an “axis of evil” and challenged its nuclear program. The following chronology summarizes rocky relations over four decades.

1979 – On Jan. 27, five days before his return to Iran, Ayatollah Ruhollah Khomeini wrote President Jimmy Carter, "You will see we are not in any particular animosity with the Americans." Washington urged the Shah’s military to negotiate with Khomeini. On Feb. 14, students seized the U.S. Embassy in Tehran. Khomeini’s foreign minister intervened and ended the crisis within hours.

On Oct. 22, Carter allowed the deposed shah into the United States for cancer treatment. In protest, Iranian students again seized the U.S. Embassy and took 52 Americans hostage on Nov. 4. Ignoring advisors’ recommendations, Khomeini sided with the students. On Nov. 5, Prime Minister Mehdi Bazargan and his cabinet resigned in protest over Khomeini’s decision.

1980-1981 – After a U.S. rescue mission failed, Deputy Secretary of State Warren Christopher began talks with Iran in Algeria to win the hostages’ release. The Algiers Accord ended the hostage crisis on Jan. 20, 1981. The United States agreed to release frozen Iranian assets and not to intervene in Iranian affairs. A court was established in The Hague to adjudicate lawsuits and property claims. In a parting snub to Carter, Iran did not free the hostages until after President Ronald Reagan was inaugurated.

1983-1984 – On April 18, 1983, a suicide bomber killed 63 at the U.S. Embassy in Beirut. On Oct. 23, a suicide bomber attacked the barracks of U.S. Marine peacekeepers, killing 241 Marines, the largest loss of Marine lives in a single incident since Iwo Jima. On Sep. 20, 1984, a third suicide bomber killed 23 at the new U.S. Embassy. The perpetrators of all three were linked to Iran.  The Reagan Administration put Iran on the State Department list of state sponsors of terrorism and withdrew Marine peacekeepers from Lebanon.

1985-1986 – On June 2, 1985, Parliamentary Speaker Akbar Hashemi Rafsanjani proposed restoring relations with the  United States. On Jan. 17, 1986, Reagan authorized secret talks with Iran to free American hostages in Lebanon and promote “moderate” elements in Tehran. Between May 25 and 28, National Security Adviser Robert McFarlane and Lt. Col. Oliver North traveled to Iran to negotiate and deliver arms. On September 19 and 20, Rafsanjani’s nephew visited the White House with a four-point proposal. The United States sent arms to Iran via Israel; Iran in turn funneled funds to the anti-communist Contra guerillas in Nicaragua, which was illegal under U.S. law.

1984-1988 – As the Iran-Iraq War escalated, Iran targeted oil tankers departing from Persian Gulf countries. “Either the Persian Gulf will be safe for all or no one,” Rafsanjani declared in 1984.

On July 24, 1987, the United States began reflagging and escorting Kuwaiti tankers. On Sep. 19, a U.S. helicopter attacked the Iran Ajr, a ship laying mines in the Gulf. Five Iranians were killed. In a U.N. address a day later, President Ali Khamenei condemned the “dangerous presence of American warships” and vowed a response to “this hideous action.”

On Oct. 19, U.S. naval forces destroyed two Iranian oil platforms after Iran attacked a U.S.-flagged Kuwaiti tanker. On April 14, 1988, the USS Samuel B. Roberts, a frigate on tanker-escort duty, was severely damaged by an Iranian mine; 10 sailors were injured. The United States retaliated by sinking or disabling two frigates and six patrol boats – roughly half of the regular Iranian Navy’s operational fleet.

On July 3, the USS Vincennes shot down Iran Air Flight 655, a passenger plane with 290 passengers and crew. U.S. officials claimed that the Vincennes mistook it for a warplane; Iranian leaders denounced the downing as terrorism.

1989 – In his inaugural address, President George H.W. Bush extended a feeler to Iran. “There are today Americans who are held against their will in foreign lands,” he said. “Assistance can be shown here and will be long remembered. Good will begets good will. Good faith can be a spiral that endlessly moves on.” Rafsanjani subsequently intervened to free the remaining U.S. hostages in Lebanon; the last was released in 1991.

1995 – On March 15, Rafsanjani offered a billion-dollar contract to U.S. oil giant Conoco to develop two offshore oil fields; it would have been the largest oil contract ever tendered by Iran. President Bill Clinton blocked the deal in an executive order banning U.S. investment in Iran’s oil industry; the move was partly in response to Congressional pressure. On May 6, Clinton declared a total embargo of U.S.-Iran trade and investment due to Tehran’s nuclear ambitions, sponsorship of terrorism, and hostility to Arab-Israeli peace. Referring to the Conoco offer, Rafsanjani said, "This was a message to the United States, which was not correctly understood. We had a lot of difficulty in this country by inviting an American company to come here with such a project because of public opinion."

1996 – On June 25, terrorists bombed Khobar Towers, a U.S. Air Force housing complex in Saudi Arabia, killing 19. Attorney General John Ashcroft charged that Iran “inspired, supported, and supervised members of Saudi Hezbollah.” The United States later blamed the Revolutionary Guard (IRGC). “The United States has no hostile intentions towards the Islamic Republic of Iran and seeks good relations with your government but we cannot allow the murder of U.S. citizens to pass unaddressed,” Clinton wrote President Mohammad Khatami. Iran’s leaders denied the accusation as “inaccurate and unacceptable.” They instead emphasized that “the Iranian people not only harbor no enmity, but indeed have respect for the great American people.”

1998 – On Jan. 7, Khatami offered a “dialogue of civilizations” to bring down the “wall of mistrust” with the United States. In a message on the Muslim holiday of Eid Al Fitr, Clinton said that the United States “regrets the estrangement of our two nations … I hope that the day will soon come when we can enjoy once again good relations with Iran.” In a subsequent speech, Secretary of State Madeleine Albright urged Iran to negotiate ''a road map leading to normal relations.” The Clinton Administration sought formal talks, but Khatami called for cultural and academic exchanges first.

2000 – On March 17, Albright expressed regret for the U.S. role in the 1953 overthrow of Prime Minister Mohammad Mossadegh. ”It is easy to see now why many Iranians continue to resent this intervention by America in their internal affairs,” she said. Tehran denounced the gesture because Albright’s speech criticized Iran’s domestic policies. The United States also lifted sanctions on carpets, pistachios, and caviar. In the fall, Albright met Foreign Minister Kamal Kharrazi in New York during multilateral talks on Afghanistan. It was the highest-level contact between U.S. and Iranian officials since 1979. 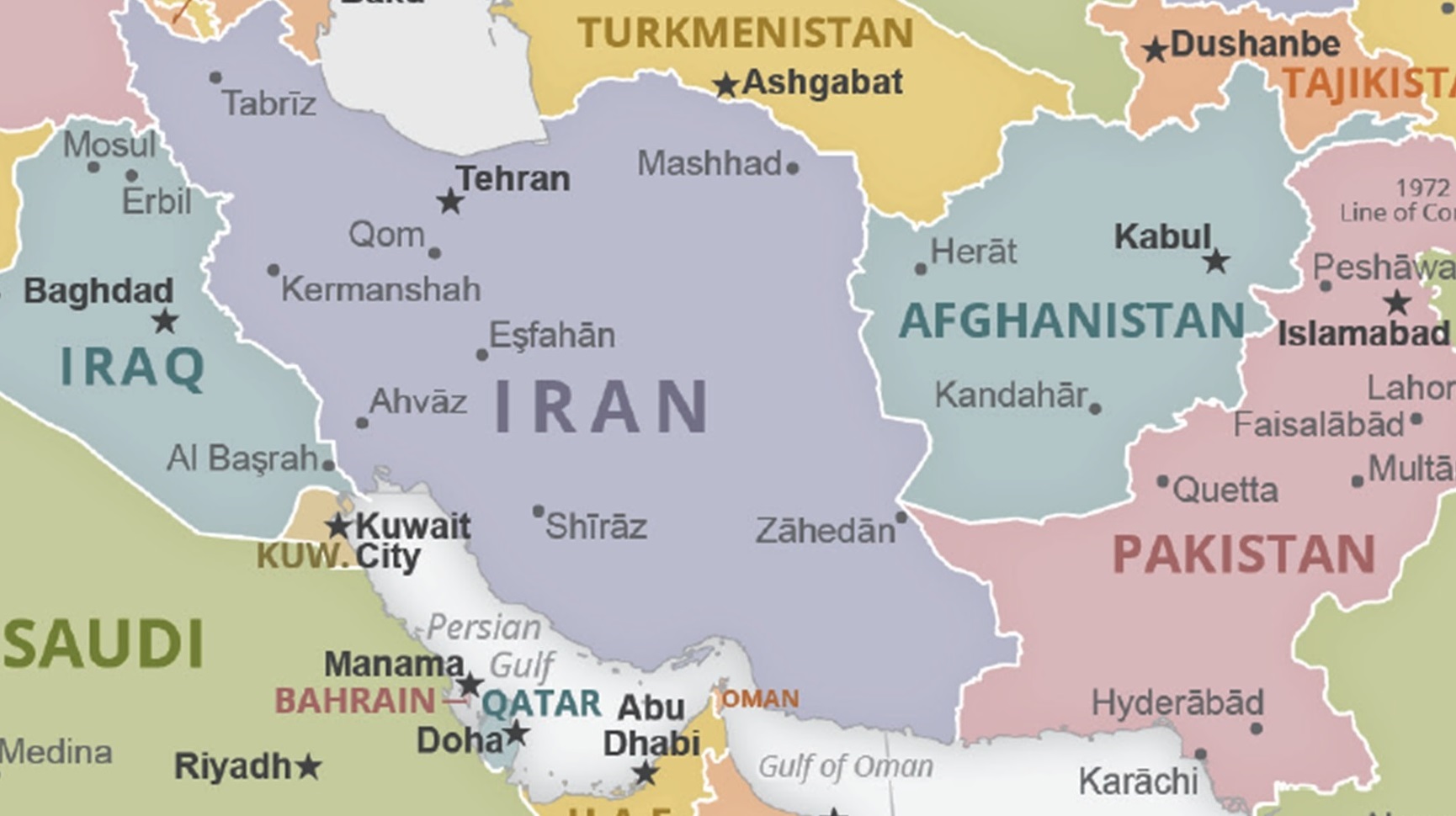 2002 – In his State of the Union address, President George W. Bush named Iran one of three nations in an “axis of evil” that “threaten the peace of the world.” In response, Soleimani called off cooperation with the United States in Afghanistan.

2003 – Through the Swiss, Iran offered Washington a “grand bargain” that encompassed the major diplomatic, economic and security goals of both countries. The Bush Administration ignored the offer.

2003-2011 – In 2004, the U.S. and Iranian ambassadors in Baghdad met twice. For eight years, however, Tehran armed Shiite militias that attacked U.S. troops in Iraq. The United States claimed that Iran was responsible for more than 600 American deaths.

2005 – The United States supported nuclear talks in Paris between Iran and three European governments. After his inauguration, President Mahmoud Ahmadinejad broke off talks on grounds that the demand to stop Iran’s nuclear program was unacceptable.

2006 – Ahmadinejad sent Bush an 18-page letter asking how U.S. foreign policy could be reconciled with the teachings of Jesus Christ. “All prophets speak of peace and tranquility -- based on monotheism, justice and respect for human dignity. Do you not think that if all of us abide by these principles, we can overcome the world's problems? Will you not accept this invitation?” he wrote. The Bush Administration ignored the letter.

2009 – In his inaugural address, President Barack Obama promised U.S. adversaries, “We will extend a hand if you are willing to unclench your fist.” During the Persian New Year (Nowruz) in March, he directly addressed Iranian leaders. “My administration is now committed to diplomacy that addresses the full range of issues before us and to pursuing constructive ties among the United States, Iran and the international community,” he said. Obama also twice wrote Khamenei calling for improved relations. Tehran dismissed the overture. "They give the slogan of change but in practice no change is seen," Khamenei said.

2010 – The Obama Administration rejected a deal that Brazil and Turkey negotiated with Iran to swap enriched uranium for nuclear fuel rods to prevent them from being used to make a bomb.

2013 – On Feb. 2, Vice President Joe Biden announced that the United States was prepared to hold direct talks with Iran on its nuclear program. Khamenei initially rejected the offer, but reversed course after Obama sent a Nowruz message promising a “new relationship” if the nuclear issue was resolved.

On Sep. 26, Secretary of State John Kerry and Foreign Minister Mohammad Javad Zarif met at the U.N. General Assembly, where foreign ministers from the five permanent members of the UN Security Council and Germany agreed to new nuclear diplomacy. The next day, Obama called President Rouhani. It was the first direct communication between U.S. and Iranian presidents since 1979.

2015 – On July 14, Iran and the world’s six major powers announced a deal on Iran’s nuclear program. In the Joint Comprehensive Plan of Action (JCPOA), Tehran agreed to limit various aspects of its nuclear program from 10 to 25 years in exchange for the lifting of nuclear-related sanctions. On July 20, the UN Security Council unanimously adopted Resolution 2231 endorsing the JCPOA.

2018 – On May 8, President Donald Trump withdrew from the JCPOA and re-imposed sanctions on Iran. The International Atomic Energy Organization (IAEA) repeatedly certified that Iran remained in compliance with the deal.

John Prentice Caves III, a research assistant at the U.S. Institute of Peace, assembled this chronology.