Families of Detainees in Iran Appeal to Congress

On March 7, relatives of three Americans detained in Iran appealed to lawmakers and the Trump administration to do more to free their family members. Babak Namazi spoke on behalf of his father, Baquer, and brother, Siamak, who were sentenced to 10 years imprisonment for allegedly collaborating with a “hostile” government. The “situation for my family, and especially my seriously ill father, is critical and swiftly heading towards an irreversible tragedy unless something is done and done urgently,” said Namazi. His ailing 82-year-old father has not received proper medical treatment. The family has said that the charges are unjust, and a U.N. working group concluded that the father and son are being held illegally and in violation of international law. Siamak is a Dubai-based businessman specializing in energy. Baquer is a former provincial governor and UNICEF representative. He most recently headed an umbrella organization of Iranian NGOs.

Hardliners dominate Iran's judiciary, intelligence agencies and security services. President Hassan Rouhani has had limited impact on human rights issues since taking office in 2013. The Revolutionary Guards arrested at least 30 dual nationals from 2015 to 2017, 19 of whom had citizenship in Europe, according to a Reuters investigation. Western governments are limited in their ability to help their citizens because the Iranian government does not recognize dual citizenship. Dual U.S.-Iranian citizens are in a particularly difficult situation. The Swiss government serves as a protecting power for U.S. interests in Iran through its embassy. But the Iranian government will not allow the Swiss to provide protective services for U.S. citizens who are also Iranian nationals.

During the hearing, Christine Levinson, wife of former FBI agent Robert Levinson, expressed frustration over efforts to get her husband back since he went missing in 2007. Levinson was reportedly on an unauthorized CIA mission on Kish Island. In 2010, the family received video evidence that Robert was alive. In 2011, the State Department announced that it had information indicating he was being held in Southwest Asia. “My husband is the longest-held hostage in American history,” Levinson said during the committee hearing. “I feel more could be done. It’s necessary for the Trump administration to make this a priority.” 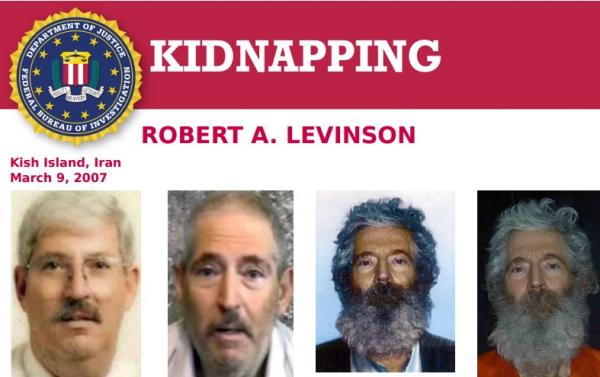 Omar Zakka, son of permanent resident Nizar Zakka, told lawmakers that his father “has been subjected to physical and mental torture.” Nizar was detained on his way to the airport in 2015 after he was reportedly invited by the Iranian government to participate in a conference on entrepreneurship. While accused of having deep ties with the US intelligence and military apparatuses by the Revolutionary Guard Corps, his family has maintained that no such ties exist. “We are tormented by the fear that something will happen to him or has happened to him,” said Zakka.

The following is the testimony of Babak Namazi. More information on dual nationals and foreigners held in Iran can be found here.

Mr. Chairman and distinguished members of the Subcommittee, thank you for inviting me to testify today.

I sit before you in utter desperation and disbelief that over 3.5 years into my family’s indescribable anguish, both my 82-year-old ailing father, Baquer Namazi, and 47-year-old brother, Siamak Namazi, continue to unjustly and cruelly languish in Iran, each with 10 year prison sentences.

For reasons I still do not understand, my innocent family was targeted by Iran’s Islamic Revolutionary Guard Corps and being used as pawns and hostages. Since this nightmare began, my family has faced the evil might and power of the IRGC. It has imposed on us a relentless and sustained campaign of cruelty, pain, suffering, lies and horrors, which continues until today.

The fictional charges my family has been convicted of is “collaboration with hostile government” referring to the United States. The United Nations Working Group on Arbitrary Detention has found my father and brother were both held illegally and in violation of international law, demanding their immediate release. Yet even while convicting my family of collaborating with the U.S. as a “hostile” government, Iran has claimed to the International Court of Justice that the United States is breaching a 1955 Friendship Treaty.

To my shock, Iran has accused my family of most of the problems it faces, including U.S. sanctions, UN sanctions, shortages of oil and petroleum, shortages of medical supply, reduction of the size of the country’s population, and unleashing the Stuxnet virus, among others. Unbelievably, the IRGC has spent enormous resources to propagate these wild conspiracy theories, even producing a multi-part “documentary” broadcast on national Iranian television.

I am here today, however, because it must be emphasized that the situation for my family, and especially my seriously ill father, is critical and swiftly heading towards an irreversible tragedy unless something is done and done urgently. I am here today to implore the Trump Administration, the U.S. Congress, the United Nations, and really anyone at all to help me save the lives of my father and brother.

Since my father’s unjust imprisonment in February 2016, he has been hospitalized eight times, two of which required emergency heart related surgeries including installation of a pacemaker. My father would only be rushed to the hospital by the IRGC when his health reached critical deterioration and often his requests for medical attention were ignored, causing severe harm. My father lost over 20 pounds, was placed for extended periods in solitary confinement, and was subjected to severe psychological torment.

While my father is currently on a restricted temporary medical furlough, his health continues to decline – in fact the rate of deterioration is accelerating daily. Aside from his already weakened heart and related ailments – which continue to deteriorate – he has been recently diagnosed with epilepsy as well as a 70% blockage of main arteries leading to his brain significantly increasing risk of stroke. My father is getting weaker every day and cannot take a few steps without his knees buckling under him and loss of balance.

It seems every day a new ailment unleashes itself on my frail father.

We all live in constant fear that at any moment my father will have his temporary medical furlough revoked and be dragged back to Evin Prison. It is due to this fear that I reluctantly have been keeping a lower profile and drawing less attention to our plight.

But as the only capable family member living in freedom, I must do all I can to save my beloved father and brother. I can no longer keep quiet.

The horrific and painful reality is that my father is dying. He needs proper medical attention outside of Iran and is living on borrowed time. Unless he is allowed to leave urgently I fear our already desperate circumstances will turn tragic. I have begged repeatedly, and do so again, for the Iranian government to allow my sick father to be allowed to leave Iran. We don’t want my father to leave Iran in a coma, or worse, dead.

The situation is also terrible for my innocent brother Siamak, who has been languishing in Evin Prison since October 2015.

Mr. Chairman, going against all values that we stand for as Americans, the prior administration inexplicably and unforgivably left Siamak behind in January 2016 when it brought other American hostages home. At the time, a mere promise made by the Iranians to release my brother within weeks provided license to leave an American behind in the name of the greater good of the nuclear deal.

Well, we know how that horrific miscalculation turned out for my family. Not only was my brother not released, but the IRGC doubled down and also arrested my father who had been lured back to visit my brother -- shattering our lives beyond what we ever could have imagined. I spend a lot of time still wondering how our lives would have been so different today had Siamak not been abandoned in January 2016.

Since his arrest, Siamak has been subjected to severe mistreatment, including physical abuse and the use of tasers. He has been threatened with electric shock, with authorities going so far as to attach wiring to his body. He spent about a year in solitary confinement/isolation without a bed or mattress to sleep on, in addition to many other horrors. It seems that the IRGC is doing all it can to break Siamak’s will, and I have spent countless sleepless nights concerned they are succeeding.

Both my father and Siamak are innocent and are being used as pawns and hostages. My father has spent his entire life serving humanity including decades spent working with UNICEF in the most dangerous parts of the world. Growing up, my brother and I missed having my Dad around terribly, but we understood the importance of his humanitarian mission.

It is because of his impeccable record with UNICEF that the UN Secretary General, UNICEF, and hundreds of UN staff and retirees have privately and publicly reached out to the highest levels of the Iranian government to ask them to release my father on humanitarian grounds. I wish to take a moment to thank the Secretary General, UNICEF Executive Directors (Tony Lake and Henrietta Fore) and the entire UNICEF family for standing firmly beside us from day one and I urge them to continue their efforts.

Siamak similarly followed in my father’s footsteps in serving humanity. In his most recent efforts, Siamak published a detailed report in 2013 that identified the negative effects of U.S. sanctions on life saving medicine and medical equipment reaching the Iranian people.

In part, due to his work, the U.S. government relaxed its rules to allow more lifesaving medicine to reach the Iranian people. Cruelly, such humanitarian advocacy by Siamak were criminalized by the IRGC and the Iranian government.

I have engaged countless Trump Administration officials to advocate for my family. With the recent appointment of the Special Presidential Envoy on Hostage Affairs Robert O’Brien, I am glad there is finally a person responsible for coordinating and leading the efforts to bring home hostages like my family. I am grateful to Robert and his team for working incredibly hard at this.

However, the reality is that more than two years after President Trump’s inauguration, at least to me, it seems that we are not any closer in bringing my family and other hostages home. While I do not understand the politics involved between our country and Iran, what I do know is that whatever has been tried so far has not worked.

I strongly believe that only through direct engagement focused on the humanitarian imperative of bringing home American hostages, will there be a likelihood of success. While a direct dialogue will not guarantee success, in my view, the absence of dialogue will guarantee failure – a failure which would result in my father’s death and my brother’s serving at least 10 years in prison. We cannot afford to spare any efforts.

Finally, I would like to share with you a part of a personal message from my dad to his UNICEF colleagues urging them to continue humanitarian efforts on behalf of the needy. My father sent this message to me as he was being forced back to prison after one of his emergency heart related surgeries:

While the pain of those dearest to me continues to hurt deeply, I am also sorry that with the help of all of you and other great humanitarians that I could not continue to serve our common cause of peace for children, especially in the sorely troubled Middle East region, elimination of poverty through people empowerment, combatting child trafficking and opening space to hear the voices of the poor . . . Sustaining these great causes will be the best reward that can, God willing, be granted to this humble man.

My father and brother have dedicated their lives to the most important causes of humanity. Now, we desperately and urgently need humanity to be a voice for them before it is too late. Please be that voice. Thank you.

More information on dual nationals and foreigners held in Iran can be found here.