On June 20, the State Department released its annual “Trafficking in Persons Report,” which again designated Iran as a Tier 3 country, the lowest ranking possible. “The Government of Iran does not fully meet the minimum standards for the elimination of trafficking and is not making significant efforts to do so,” according to the report. It “continued to force or coerce children and adults to fight for Iranian-led militias operating in Syria, and it provided financial support to militias fighting in armed conflicts in the region that recruited and used child soldiers.” The report also warned that worsening economic and environmental conditions “have significantly exacerbated Iran’s human trafficking problem, particularly for vulnerable communities such as ethnic minority groups, refugee and migrant populations, and women and children.” The following are Iran-related excerpts from the report. 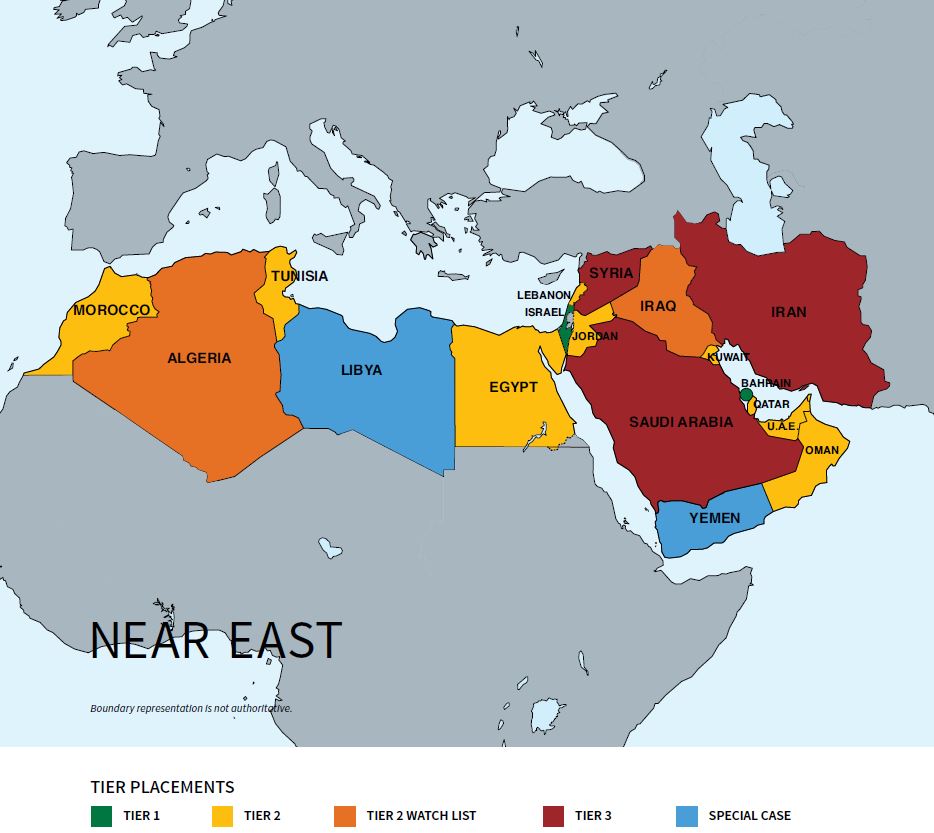 The Government of Iran does not fully meet the minimum standards for the elimination of trafficking and is not making significant efforts to do so; therefore Iran remained on Tier 3. Government officials continued to perpetrate or condone trafficking crimes with impunity both in Iran and overseas and failed to report law enforcement efforts to address the crime. The government continued to force or coerce children and adults to fight for Iranian-led militias operating in Syria, and it provided financial support to militias fighting in armed conflicts in the region that recruited and used child soldiers. In addition, the government failed to identify and protect trafficking victims among vulnerable populations and continued to treat trafficking victims as criminals, including child sex trafficking victims. Victims continued to face severe punishment, including death, for unlawful acts traffickers compelled them to commit, such as commercial sex acts and immigration violations.

While respecting due process, investigate, prosecute, and convict sex trafficking and forced labor perpetrators—particularly complicit government officials—and sentence convicted traffickers to significant prison terms. • Cease the forcible and otherwise illegal recruitment of adults and children for combat in Syria, and cease support for armed militias that recruit and use child soldiers in Iraq, Syria, and Yemen. • Cease punishment of trafficking victims for unlawful acts traffickers compelled them to commit, such as commercial sex acts and illegal immigration. • Institute nationwide procedures to proactively identify trafficking victims, particularly among vulnerable populations such as persons in prostitution, street children, and undocumented migrants. • Offer specialized protection services to victims of all forms of trafficking, including shelter and medical, psycho-social, and legal assistance. • Develop partnerships with civil society and international organizations to combat trafficking and to help provide essential protection services to victims. • Increase transparency of anti-trafficking policies and activities. • Become a party to the 2000 UN TIP Protocol.

The government did not report anti-trafficking law enforcement efforts, and officials continued to perpetrate trafficking crimes with impunity, including sex trafficking of adults and children and the coerced recruitment and use of adults and children in armed conflict in the region. Iranian law did not criminalize all forms of trafficking. A 2004 law criminalized trafficking in persons by means of threat or use of force, coercion, abuse of power, or abuse of a victim’s position of vulnerability for purposes of prostitution, slavery, or forced marriage. The prescribed penalty under this law is up to 10 years’ imprisonment if the trafficking offense involved an adult victim and a penalty of 10 years’ imprisonment if the offense involved a child victim. Both penalties were sufficiently stringent and, with respect to sex trafficking, commensurate with the penalties prescribed for kidnapping. The 2002 Law to Protect Children and Adolescents criminalized buying, selling, and exploiting children; the punishments for such crimes are six months to one year imprisonment and a fine, which were not sufficiently stringent nor commensurate with other serious crimes such as kidnapping. The labor code criminalized forced labor and debt bondage, but the prescribed penalty of a fine and up to one year imprisonment was not sufficiently stringent. Courts accorded legal testimony by women only half the weight accorded to the testimony by men, thereby restricting female trafficking victims’ access to justice. Moreover, female victims of sexual abuse, including sex trafficking victims, faced prosecution for adultery, which is defined as sexual relations outside of marriage and is punishable by death.

The government continued to conflate human trafficking and human smuggling crimes, and efforts to address sex trafficking and forced labor crimes were either nonexistent or not widely publicized. The government did not report providing anti-trafficking training to its officials, and it did not report statistics on investigations, prosecutions, convictions, or sentences of traffickers. There was no evidence the government held complicit officials accountable for trafficking offenses, despite continued reports that officials were widely involved in trafficking crimes. The government condoned or directly facilitated the commercial sex of men, women, and children, including clear cases of sex trafficking, throughout Iran and in neighboring countries. Multiple reports alleged that Iran’s Islamic Revolutionary Guard Corps (IRGC) and the Iranian Basij Resistance Force (Basij), a paramilitary force subordinate to the IRGC, continued to actively recruit and use—through force or coercive means—migrant and refugee children and adults, as well as Iranian children, for combat in IRGC-led and commanded militias in Syria.

As reported over the past five years, human traffickers exploit domestic and foreign victims in Iran, and traffickers exploit victims from Iran abroad. The ongoing worsening of the Iranian economy, as well as serious environmental degradation in Iran, have significantly exacerbated Iran’s human trafficking problem, particularly for vulnerable communities such as ethnic minority groups, refugee and migrant populations, and women and children. Iranian and some foreign women and girls, as well as some men, are highly vulnerable to sex trafficking in Iran. Although prostitution is illegal in Iran, a local NGO estimated in 2017 that prostitution is endemic throughout the country, and reports estimate sex traffickers exploit children as young as 10 years old. The government reportedly condones and, in some cases, directly facilitates the commercial sexual exploitation of adults and children throughout the country; Iranian police, Islamic Revolutionary Guard Corps (ICRGC), Basij, religious clerics, and parents of victims are allegedly involved in or turn a blind eye to sex trafficking crimes. The demand for commercial sex reportedly occurs in large urban centers, including major pilgrimage sites of Qom and Mashhad; reportedly Iranian, Iraqi, Saudi, Bahraini, and Lebanese women in these locations are highly vulnerable to trafficking. Poverty and declining economic opportunities lead some Iranian women to willingly enter prostitution whom traffickers subsequently force or coerce to remain in prostitution. Some Iranian women who seek employment to support their families in Iran, as well as young Iranian women and girls who run away from their homes, are vulnerable to sex trafficking. “Temporary” or “short-term” marriages—known as “sigheh” and for the purpose of commercial sexual exploitation—lasting from one hour to one week are reportedly widespread in Iran and take place in so-called “chastity houses,” massage parlors, and private homes. These arrangements are reportedly tightly controlled and condoned by the state and regarded highly by religious leaders to allow men to sexually exploit female and male Iranian, as well as Chinese, Thai, and other victims, including children. Afghan girls are vulnerable to forced marriage with men living in Iran, which frequently leads to sex trafficking, forced labor, and domestic servitude.

Iranian women, boys, and girls are vulnerable to sex trafficking abroad, including in Afghanistan, Armenia, Georgia, Iraq, the Iraqi Kurdistan Region (IKR), Pakistan, Turkey, and the United Arab Emirates (UAE). In 2018, a prominent Iranian NGO reported a rise in the number of Iranian nationals in prostitution in nightclubs in Tbilisi, Georgia, including some child sex trafficking victims; pimps and madams in Tbilisi reportedly confiscate victims’ passports and physically abuse and threaten victims. The media continued to report in 2018 an increase in young Iranian women in prostitution in Dubai; some of these women are trafficking victims, whose pimps confiscate their passports and threaten them with violence or execution if they return to Iran. Some reports also suggest collusion between pimps in Dubai and Iranian police, the IRGC, and Basij. Consumers of Iranian women in prostitution, including trafficking victims, in Dubai are reportedly nationals from Saudi Arabia, Kuwait, and Qatar. Reports suggest that Iranian women are also vulnerable to sex trafficking in Turkey, particularly in Turkish cities close to the Iranian border. According to IKR press reports, more than 2,000 young Iranian women and girls entered the IKR in 2018, many of whom are victims of sex trafficking in cafes, hotels, and massage centers. Media reports from 2015 and 2016 also noted sex traffickers exploit Iranian girls in brothels in the IKR, especially Sulaimaniya. According to a regional scholar, trafficking rings reportedly use Shiraz, Iran, as a transit point to bring ethnic Azeri girls from Azerbaijan to the UAE for commercial sexual exploitation.

Iranian and Afghan refugee children, street children, and orphans in Iran are highly vulnerable to forced labor. The number of children working in transport, garbage and waste disposal, “dumpster diving,” car washing, brick factories, construction, and the carpet industry reportedly continues to increase; these children experience abuse and withheld wages and may be exposed to infectious diseases. Young Afghan refugee children, mainly boys, are forced to perform cheap labor and domestic work, which often involves debt-related coercion, restriction of movement, nonpayment of wages, and physical or sexual abuse. Children are also highly vulnerable to organized criminal groups that operate child begging rings in Iran. Criminal groups kidnap or purchase and force Iranian and migrant children, especially undocumented Afghan children, to work as beggars and street vendors in cities, including Tehran. These children, who may be as young as three years old, are routinely subjected to physical and sexual abuse and drug addiction. Orphaned children are vulnerable to criminal begging rings that maim or seriously injure the children to gain sympathy from those passing on the street. Poor families “rent” their children by the day to criminal groups that force the children, some as young as five years old, to beg in the street; if the children do not collect a specified amount of money by the end of the day, the groups force children to work in illegal workshops. Reports indicate that organized gangs force some children, including Afghan refugee children, to conduct illegal activities, such as drug trafficking and smuggling of fuel and tobacco.

Foreign workers, Pakistani migrants, and Afghan migrants and refugees are highly vulnerable to forced labor and debt-related coercion in Iran. Organized trafficking groups subject Pakistani men and women migrants in low-skilled employment, such as domestic work and construction, to forced labor using debt-related coercion, restriction of movement, non-payment of wages, and physical or sexual abuse. Increasingly, employers seek adjustable work contracts for registered foreign workers’ where employers deny workers their benefits and coerce them to work overtime, increasing the workers’ vulnerability to forced labor. Traffickers subject Afghan migrants, including children, to forced labor in construction and agriculture in Iran. Trafficking networks smuggle Afghan nationals living in Iran to Europe and force them to work in restaurants to pay off debts incurred by smuggling fees.

Iranian authorities force and coerce Afghan migrants and refugees, including children, as well as some Pakistani migrants and Iranian children, into armed groups in the region. Several credible sources continued to widely report the IRGC and Basij coerced male adult and child Afghans resident in Iran, including boys as young as 13 years old, to fight in the Iranian-led and funded Fatemiyoun Division deployed to Syria. Officials threaten these individuals with arrest and deportation to Afghanistan. Basij also reportedly recruits and trains Iranian children who are deployed to Syria. Sources also indicate the government exploits undocumented and impoverished Pakistani adults living in Iran to fight for the IRGC-led Zaynabiyoun Brigade in Syria. In addition, the Iranian government provides funding to militias operating in Iraq, Asa’ib Ahl al-Haq (AAH) and Harakat Hezbollah al-Nujaba (HHN), which recruit, train, and use child soldiers in combat in Iraq, Syria, and Yemen. According to an Iraq-based source in 2016, the Iranian government also provided funding to the militia Abu Fadhl al-Abbas Brigades, which used children in combat on the front-line in Fallujah, Iraq in 2016.