At least four countries – Iraq, Japan, Oman, and Switzerland – have either served as or offered to be intermediaries between Iran and the United States. U.S.-Iran tensions began building on May 5 after National Security Advisor John Bolton announced the deployment of a carrier strike group and bomber task force to the Middle East “to send a clear and unmistakable message to the Iranian regime that any attack on United States interests or on those of our allies will be met with unrelenting force.” Bolton said the deployment was in response to an increased threat, but he did not offer specifics. Throughout May, Iranian and U.S. officials traded barbs, accusing the other country of aggression.

But on June 2, Secretary of State Mike Pompeo said the United States was ready to negotiate with Iran with no preconditions. “We’re ready to sit down with them. But the American effort to fundamentally reverse the malign activity of this Islamic republic, this revolutionary force, is going to continue,” he said during a joint press conference with his Swiss counterpart, Iganzio Cassis. Switzerland has historically been an intermediary between the United States and Iran. In the absence of formal diplomatic relations between Iran and the United States, the Swiss represent U.S. interests in Tehran. The following is a chronology of diplomacy on U.S.-Iran tensions.

May 15 – Secretary Pompeo spoke with Omani Sultan Qaboos bin Sa'id Al Sa'id about “Iranian threats to the Gulf region” in a telephone call. Oman, located next to the Strait of Hormuz, has historically been an interlocutor between Iran and the United States. 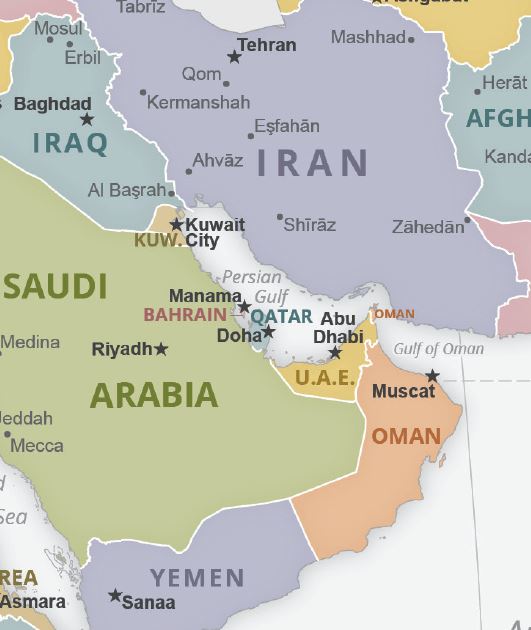 May 16 – President Trump welcomed Swiss President Ueli Maurer to the White House. When asked by the press if the United States was going to war with Iran, Trump responded, “I hope not.” The two were going to discuss “matters such as Switzerland's role in facilitating diplomatic relations and other international issues,” according to a White House statement.

Reporter: "Mr. President, are we going to war with Iran?"

May 24 – Oman’s Foreign Ministry said it was working to ease tensions between Iran and the United States. It tweeted remarks made by Foreign Minister Alawi in an interview with Al-Sharq Al-Wasat. Alawi warned that war “could harm the entire world if it breaks out.”

May 26 – Iraqi Foreign Minister Mohammed al Hakim said his country would like to help deescalate tensions between Iran and the United States. “We are trying to help and to be mediators,” he said at a joint press conference with Iranian Foreign Minister Zarif. Hakim added that Baghdad does not approve of unilateral steps taken by Washington. Zarif called for a non-aggression pact between Iran and the Arab Gulf states.

June 2 – A Japanese paper, the Mainichi Shimbun, reported that Prime Minister Shinzo Abe will meet with Iranian President Hassan Rouhani and Supreme Leader Ayatollah Ali Khamenei in an effort to mediate between Tehran and Washington. Abe was slated to visit Iran from June 12 to 14. Japan, a key U.S. ally, has historically had positive relations with the Islamic Republic. It was a major purchaser of Iranian oil before U.S. sanctions went into effect following Washington’s withdrawal from the nuclear deal in 2018.

Secretary Pompeo, in a press conference with his Swiss counterpart, said the United States was “prepared to engage in a conversation with no preconditions” with Iran. “But the American effort to fundamentally reverse the malign activity of this Islamic republic, this revolutionary force, is going to continue,” he said.

Swiss Foreign Minister Iganzio Cassis said his country would be happy to serve as an intermediary, but not a “mediator,” since that would require requests from Tehran and Washington. “Both parties are now increasing the pressure, and for the rest this is a matter of worry, but we cannot do anything unless we get a mandate from both parties,” he told the press.

June 3 – Secretary Pompeo clarified that that the United States would talk to Iran if it was ready to have a conversation about wide-ranging changes to its domestic and foreign policy. He told Radio Television Suisse:

We want them to cease their nuclear weapons programs and put a permanent halt to them. We want them to stop building up their missile systems in ways that present a threat to places like Switzerland. We want them to cease their terror campaign around the world that has displaced millions of people and killed hundreds of thousands of people. This is what we’re asking from Iran. And so when Iran is ready to have that conversation, a conversation about them seriously engaging as a nation in a normal way, we’re ready to have that conversation. It’ll happen at every level.

Secretary Pompeo canceled a visit to Germany to make an unannounced trip to Iraq. He met with Prime Minister Adil Abd al Mahdi, President Barham Salih and other ranking officials during his roughly four hours in Baghdad. The United States “wanted to let them know about the increased threat stream [from Iran and its proxies] that we had seen and give them a little bit more background on that so they could ensure that they were doing all they could to provide protection for our team,” he told reporters. “The central messages are this: We want to make sure that Iraq is positioned so that the relationship that we've built with them and that our allies in the region have built with them -- allies that range all across the Gulf, who understand that the primary threat in the Middle East is Iran -- remains strong, that those relationships remain strong,” Pompeo added. In his meetings, Pompeo emphasized that Iraq should not depend on Iran for electricity.