In mid-2019, tensions in the Persian Gulf echoed the threat to world oil supplies during the eight-year war between Iran and Iraq in the 1980s. In May and June 2019, maritime security deteriorated after the sabotage of six oil tankers in the Gulf of Oman just beyond the Strait of Hormuz. (See timeline). The price of crude rose, briefly, by nearly four percent. Roughly a third of the world’s seaborne oil exports—or a fifth of all global exports—passes through the strait. In 2018, an average of 21 million barrels of oil passed through the Strait of Hormuz daily.

During the Iran-Iraq war, tankers and other ships also became targets. Between 1984 and 1988, a total of 451 ships were hit in the Gulf. The so-called Tanker War was launched by Iraq’s airstrike on Iran’s Kharg Island oil terminus and several Iranian ships. Two months later, Iran began to target ships ferrying oil for Iraq. Commercial shipping initially declined by 25 percent. By 1987, the height of the war, the amount of oil shipped through the Strait of Hormuz fell to less than 4 million barrels per day—down from more than 7 million bpd in 1984. In 1987, to help protect the world’s oil supplies, the United States launched Operation Ernest Will to reflag and escort Kuwaiti tankers ferrying Iraqi oil. At its height, however, the war disrupted less than 2 percent of shipping through the Persian Gulf. Operation Ernest Will lasted for fourteen months—until a U.N. ceasefire ended the fighting.

The following information includes data, graphics and factoids on the two crises over tanker traffic in the Persian Gulf since the mid-1980s. 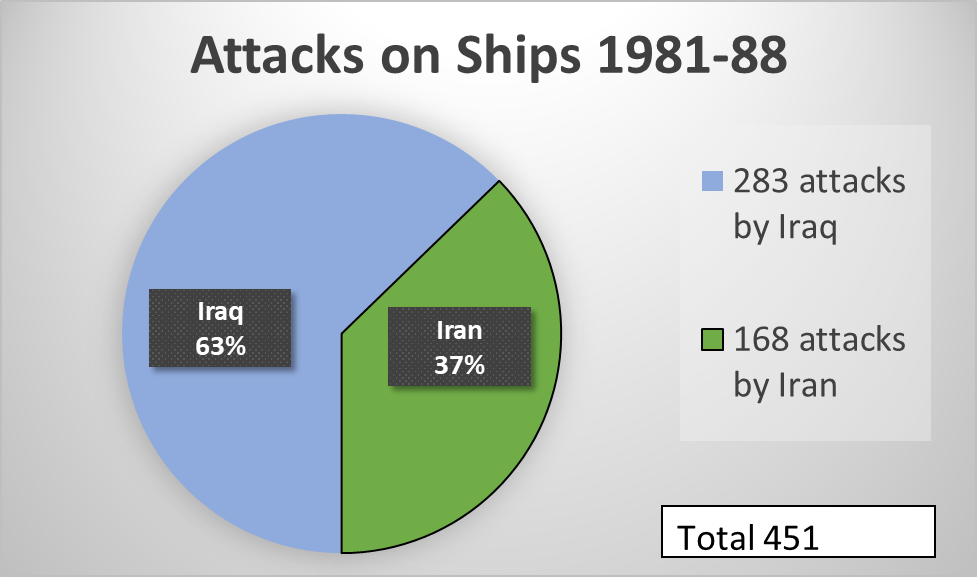 *Iran attacked Iraq’s southern oil terminus early in the war. Between 1981 and 1984, Iraq attacked ships stopping at Iranian ports, mainly at the northern end of the Gulf. In May 1984, the Tanker War erupted in full after Iraq struck Iran’s oil terminus and several tankers at Kharg Island. Iran retaliated by tankers (mainly Kuwaiti) ferrying oil for Iraq. The war continued for four years. 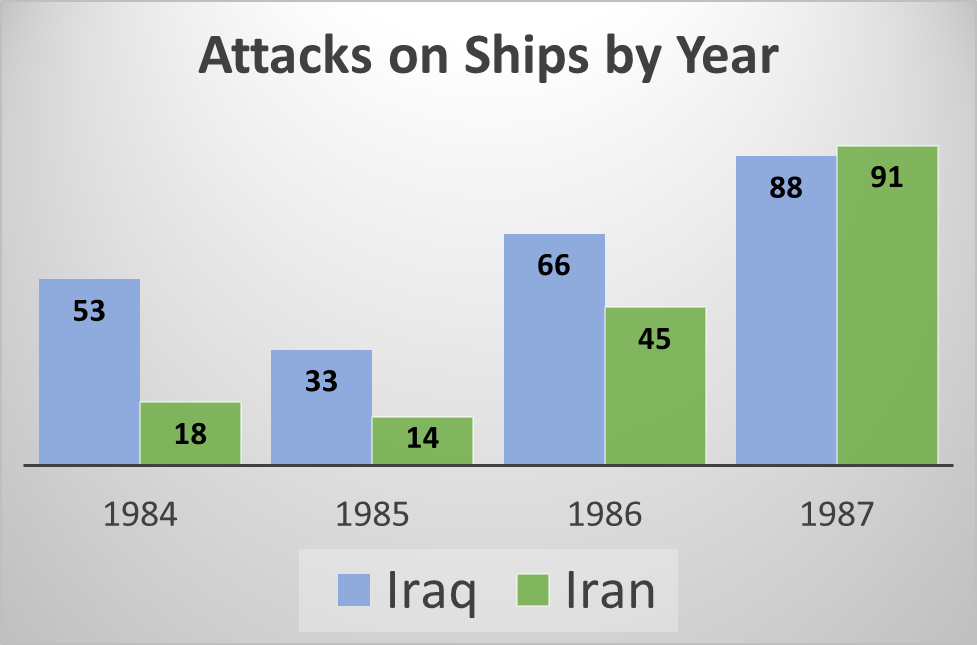 Iran and Iraq differed in what they attacked and how. Iraq attacked Iranian merchant ships, mostly tankers, in the so-called “exclusion zone” declared by Iran, which extended forty miles from its shoreline.

The Tanker War was the longest sustained attack on merchant shipping since World War II. 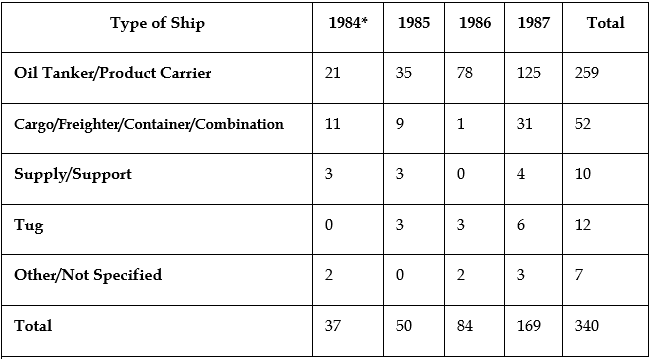 The Tanker War spilled over on ships flagged by at least 38 nations. Ships sailing under the flags of Liberia, Iran, Panama, Cyprus, and Greece suffered the highest number of attacks. The majority of Kuwait’s maritime commerce was shipped under flags of convenience, such as Liberia and Panama.

The United States launched Operation Earnest Will in July 1987 to protect Kuwaiti oil tankers from Iranian attacks in the Persian Gulf. It lasted until September 1988, when a U.N.-brokered ceasefire was declared between Iran and Iraq.

The U.S. military had one deadly encounter with Iraq, at a time the Reagan Administration was supporting the regime of President Saddam Hussein:

On July 19, 2019, the Pentagon announced the launch of Operation Sentinel, a “multinational maritime effort.” It said the goals were “to increase surveillance of and security in key waterways in the Middle East to ensure freedom of navigation in light of recent events in the Arabian Gulf region.” The campaign would escort flagged vessels of participating nations in coordination with European, Asian, and Middle Eastern allies. U.S. Central Command also approved the deployment of 500 troops to Saudi Arabia as “an additional deterrent” to Iran.

On July 22, Britain announced a European-led “maritime protection mission” to safeguard international shipping lanes. It vowed to coordinate with the United States but said its initiative would include European countries not contributing to a U.S.-led force. Germany, for instance, announced that it would not take part in the U.S. mission to avoid an escalation of tensions. France, Italy, and Denmark announced support for the British operation. In late July, a second Royal Navy warship, the HMS Duncan, was deployed to the Gulf.

The Strait of Hormuz is a vital oil chokepoint linking the Gulf of Oman to the Persian Gulf. At its narrowest point, the strait is 21 miles wide, with an international shipping lane of only two miles wide, which forces merchant ships to pass through Iranian and Omani territorial water.

In 1988, the year the war ended, Iran exported an average of 1.8 million bpd through the Strait of Hormuz, while the Arab Gulf countries exported around 5.7 million bpd. 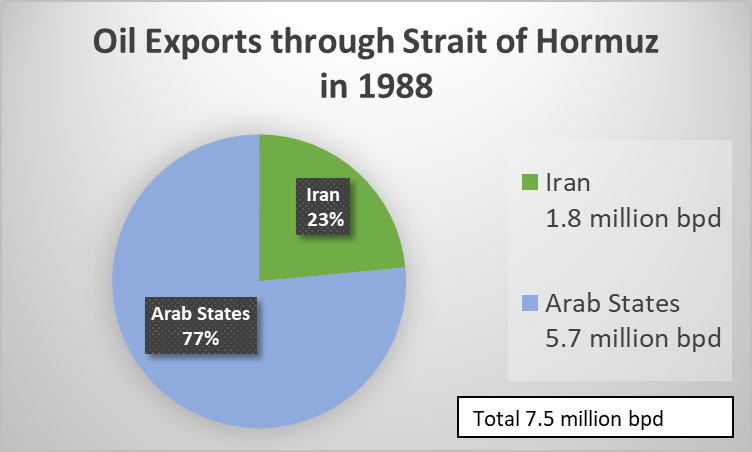 In 2018, Iran exported around 1.85 million bpd through the strait, while the Arab states exported approximately 19.2 million bpd. 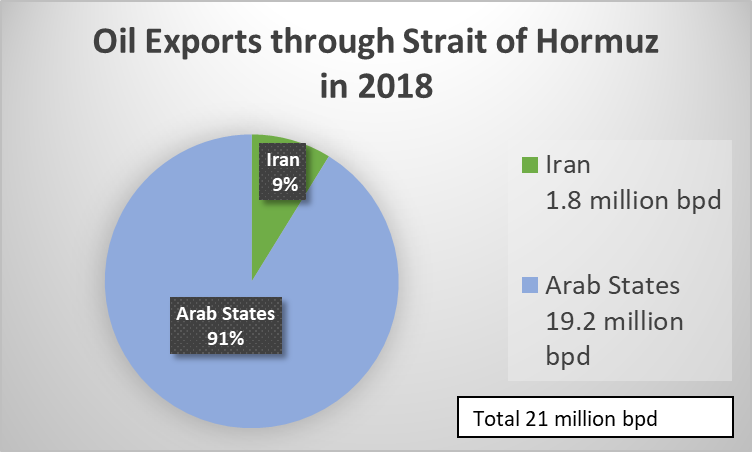 By June 2019, Iranian exports shipped through the Strait of Hormuz dropped to around 300,000 bpd, largely due to U.S. sanctions. In contrast, Arab Gulf states exported approximately 19.2 million bpd through the strait. 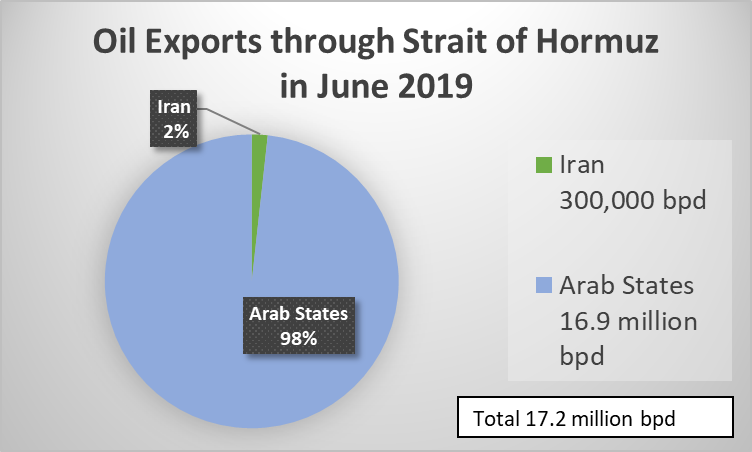