On February 25, Iranian Foreign Minister Mohammad Javad Zarif announced his resignation in an Instagram post. “With good wishes on the occasion of the blessed birth of Her Holiness Fatima Zahra, may the peace of Allah be upon her, the day of mothers and the day of women, I am very thankful for the generosity of the dear and brave people of Iran and its officials over the past 67 months,” he wrote. “I sincerely apologize for my inability to continue my service and for all of the shortcomings during the period of my service. Be happy and proud.”

Zarif has been under intense pressure over four issues, the collapse of the 2015 nuclear deal, new U.S. sanctions, Iran’s imprisonment of dual nationals, and pending legislation over complying with Financial Action Task Force (FATF) regulations. The resignation exposed deep rifts among Iran’s political elite. One specific trigger appeared to be Zarif’s exclusion from the unannounced visit to Tehran of Syrian President Bashar al Assad. Zarif told colleagues that his departure would aid in “restoring the ministry to its legal position in foreign relations.” He called on diplomats to not quit over his resignation. Ali Motahari, a moderate conservative lawmaker, said Zarif’s move was in response to “interventions by unaccountable bodies in foreign affairs.”

The resignation exposed deep rifts among Iran’s political elite. Later on February 25, President Hassan Rouhani lauded Zarif, Oil Minister Bijan Zanganeh and Central Bank head Abdolnasser Hemmati for resisting U.S. pressure in their posts. “Today, the front line against the U.S. are the foreign and oil ministries as well as the Central Bank,” he said at a meeting with Central Bank officials. “Zarif, Hemmati and Zanganeh have stood in the front line.” On February 26, Foreign Ministry spokesman Bahram Qassemi, citing Rouhani’s chief of staff, said the president had not accepted the resignation. More than 150 lawmakers signed a letter urging Rouhani to keep Zarif in his post. 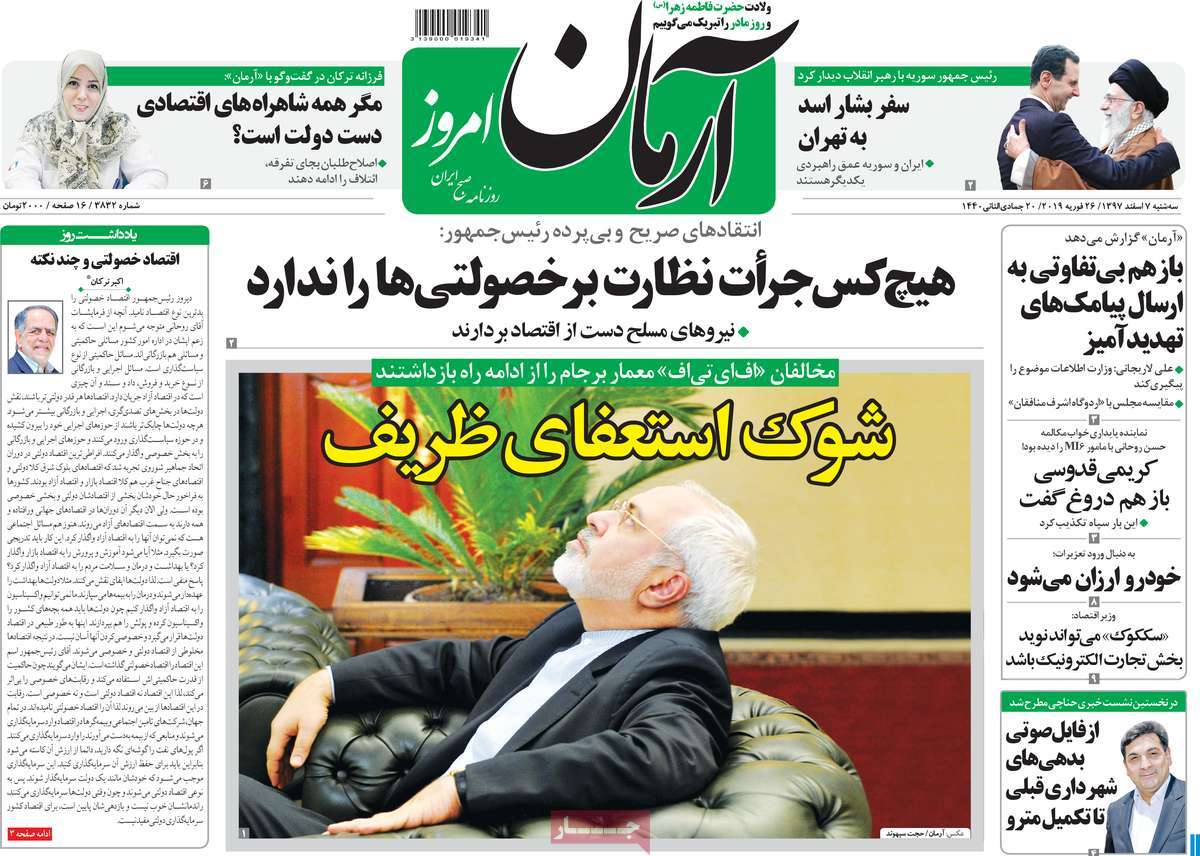 On February 27, Rouhani rejected Zarif’s resignation. “Since you are ‘honest, brave, courageous and pious,’ as the Supreme Leader put it, and since I believe you are at the forefront of resisting the intense pressures of the United States, I consider accepting your resignation against our country’s interests, and I reject it,” he wrote in a letter published on his office’s website. Zarif responded with another Instagram post, thanking Iranians for their support after his initial announcement. “I hope that the Foreign Ministry, with coordination of all and supervision of the supreme leader and the president, will be able to carry out its responsibilities rigorously in the framework of constitution, law and general policies of the system,” he wrote in a caption on top of an Iranian flag. Zarif’s return to work was confirmed when he joined Rouhani to welcome Armenian Prime Minister Nikol Pashinyan to Tehran.

Revolutionary Guards General Qassem Soleimani, commander of the elite Qods Force, also expressed support for Zarif. “Definitely, Zarif is in charge of foreign policy of the Islamic Republic of Iran and he has been always supported by top officials including the supreme leader,” he said, according to the press. Soleimani, who was present at the meeting between President Assad and Supreme Leader Khamenei, said Zarif’s exclusion was unintentional and due to a lack of coordination by Rouhani’s office. Rouhani, however, also was not at the meeting with Khamenei and Assad.

Since 2015, Zarif had been the frequent target of hardliners in Parliament and the press who thought he made too many concessions during negotiations with the world’s six major powers that led to the nuclear agreement, known as the Joint Comprehensive Plan of Action (JCPOA). At the December 2018 Doha Forum, Zarif quipped that he and Secretary of State John Kerry spent more time with each other than with their wives during the two and a half years of direct talks. Zarif’s investment in the JCPOA made him a target when the deal failed to deliver sufficient economic benefits and then began to unravel.

Zarif was increasingly stymied by opponents of two bills that Parliament had approved that would bring Iran into compliance with FATF regulations. One bill would have Iran join the U.N. Convention on Transnational Crime; and the other would allow Iran to join an international convention against the funding of terrorism. The legislation was critical to ensuring Iran would remain connected to the international banking system. The Guardian Council subsequently rejected the bills, which then went to the Expediency Council, the body charged with arbitrating disputes between Parliament and the Guardian Council. With key members absent from the vote, a final Expediency Council ruling was postponed three times.

On February 24, Zarif called for the final decision on the remaining bills to be based on “facts.” Iran has until June 2019 to comply with FATF or the watchdog will require increased supervision of banks in the Islamic Republic. If Iran continues to be considered “high-risk,” global financial institutions are likely to limit their dealings with Iranian banks. The supreme leader has repeatedly said that he does not oppose FATF’s projects, President Rouhani claimed on February 26 in a meeting with Central Bank officials.

Zarif’s resignation came a day after Supreme Leader Ayatollah Ali Khamenei warned against disputes among government officials. “My advice to all of those who have authority, who have official responsibilities, who are in the ranks of the executive, who are in diverse positions of authority, is this: that they distance themselves from dejection and weariness and impatience, that they distance themselves from hopelessness, and know that the work they have goes forward, that they advance the Revolution,” he said in a speech to students.

Zarif warned in an interview that fighting between factions and parties is a “deadly poison” for crafting foreign policy. Jomhuri Eslami newspaper published the article on February 26, but it was apparently conducted before Zarif made his announcement, the previous week according to Fars News Agency.

Zarif made his initial announcement on the anniversary of the birth of Fatimah Zahra, the Prophet Mohammad’s youngest daughter. His two Instagram posts are below, followed by Rouhani’s letter.

In the Name of Allah, the Most Beneficent, the Most Merciful

I read your resignation dated February 25. Your special attention to the position of the foreign ministry and the foreign minister as the highest official responsible for implementing the country’s foreign policy is understandable and accepted by my.

The Ministry of Foreign Affairs is responsible for foreign relations and provides the basis for the realization of national security and interests.

I appreciate your hard work during your term bearing the heavy responsibility of the Ministry of Foreign Affairs in 11th and 12th Governments, and since you are ‘honest, brave, courageous and pious’, as Supreme Leader put it, and since I believe you are at the forefront of resisting the intense pressures of the United States, I consider accepting your resignation against our country’s interests, and I reject it.

I am completely aware of the pressures on the foreign ministry, the government and even the President, who is elected by people. We will remain loyal until the end because of the vow we have made with God and the people, and I am confident that we will overcome this hard stage with God’s help.

The achievements of the foreign ministry, only in the recent months, in confronting the conspiracies of the United States in New York, Vienna, Brussels, the Hague, Warsaw, Munich, etc., and political victories at regional and international levels have been remarkable. The happiness of the sworn enemies of this people, such as the Zionist Regime, over your resignation is the best evidence of the success of Mohammad Javad Zarif, and the biggest reason for the continuation of your work as the “Minister of Foreign Affairs of the Islamic Republic of Iran”. You are trusted by me, the entire Islamic Republic system, and especially the Supreme Leader. Stay on your path with strength, tact, and courage, and God will be alongside its righteous servants.

Hassan Rouhani
President of the Islamic Republic of Iran

The following are international reactions.

We note @JZarif’s resignation. We’ll see if it sticks. Either way, he and @HassanRouhani are just front men for a corrupt religious mafia. We know @khamenei_ir makes all final decisions. Our policy is unchanged—the regime must behave like a normal country and respect its people.

Translation: “Zarif is gone. Good riddance. As long as I am here, Iran will never get nuclear weapons.”