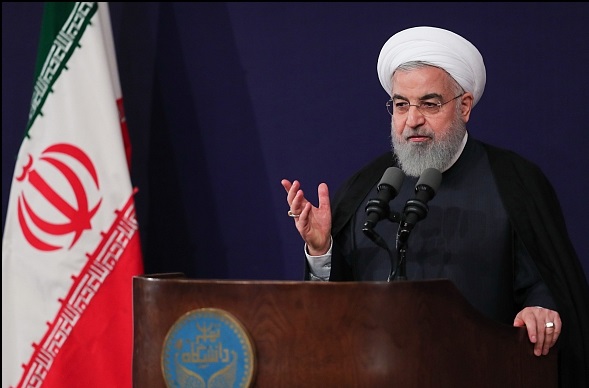 On October 14, President Hassan Rouhani said the Trump administration is the most hostile U.S. administration it has faced in four decades. “Of course, enmities existed, but now, the worst have gathered in the White House,” he said in a speech marking the beginning of the academic year at Tehran University.

Rouhani may have been referring to National Security Advisor John Bolton and Secretary of State Mike Pompeo, both of whom advocated for regime change before taking positions in the Trump administration. In their current positions, however, they have repeatedly emphasized that the administration’s policy is not regime change. “Just to be clear, regime change in Iran is not American policy. But what we want is massive change in the regime’s behavior,” Bolton said in August.

In his speech, Rouhani emphasized that Iranian citizens, especially students and professors, have the right to criticize the government. But he warned that too much criticism is not fruitful. “Some professors send letters to me, which I read and respond [to]; and some voice their opinions in interviews, and I listen to them too; but sometimes, too much salt ruins the food.” Rouhani acknowledged that the short-term outlook for Iran may not be good, but he was optimistic about the future. The following are excerpts from his speech organized by topic.

The United States, the Nuclear Deal

“In the last 40 years of the history of the United States, the current administration is the most vengeful government towards Iran, Iranians and the Islamic Republic. Of course, enmities existed, but now, the worst have gathered in the White House.”

“When they say getting rid of, regime change in their own words, how does regime change happen? Through reducing legitimacy, otherwise a regime doesn’t change.”

“Even those who are very conservative, express regret.”

“You heard the speeches and addressed at the recent meeting of the UNGA (U.N. General Assembly). Mr. Trump even chaired a UNSC (U.N. Security Council) session to get support for its policies against Iran, but all the other 14 members supported the nuclear deal.”

“We will withdraw from the deal whenever we want to. Withdrawal is like destroying a wall, which is very easy. JCPOA (Joint Comprehensive Plan of Action) staying in place or not is not important; what is important is our national interests and national security

“Everyone in the world knows that the United States has lost this legally, politically and when violating international commitments is considered; but we have won.”

“Such an issue that seemed impossible has become possible today, and the European Union has stood against the U.S.”

“Criticizing more than enough can be fruitless, but enough criticism is both fruitful and necessary.”

“Some professors send letters to me, which I read and respond [to]; and some voice their opinions in interviews, and I listen to them too; but sometimes, too much salt ruins the food.”

“There is no doubt about this [that universities should criticize the government]. But I ask them to criticize and question based on enough information about the matter.”

“When we criticize, we should know what condition our country is in. One should consider the age of the person to whom they are advising to exercise; we can’t give everybody a one-size-fits-all program.”

“Disappointment does not solve problems. It is bad to deny and say that there is no problem. Problems exist, but it is not right to say that problems cannot be solved. The short-term future may get worse, but the long-term future will definitely get better. Why would not it get better? Why would not we pass the problems?”