Rouhani: Iran Could Remain in Nuclear Deal If US Withdraws

On May 7, President Hassan Rouhani suggested that Iran could remain in the 2015 nuclear deal even if the United States withdraws. “What we want for the deal is that it's preserved and guaranteed by the non-Americans,” he told officials in Mashhad, the country’s second largest city. Rouhani was referencing the other parties to the 2015 accord — Britain, China, France, Germany, and Russia. He also warned that the United States would become more isolated if it does not fulfill its commitments. “Public opinion and the governments around the world, with the exception of a few countries, will condemn the U.S. and not blame Iran,” he said. The United States will “later regret it and realize that it has made a strategic mistake,” he warned.

President Donald Trump has threatened to withdraw from the accord if the so-called “sunset clauses,” as well as other issues outside the deal, such as Iran’s missile program and regional intervention, cannot be “fixed.” Trump is slated to decide the fate of the Joint Comprehensive Plan of Action (JCPOA) by May 12, when sanctions waivers for Iran are due for renewal. But Iranian officials have rejected outright any changes to the 2015 nuclear deal. “We will not negotiate our defensive weapons with anyone,” Rouhani said in separate remarks on May 6, seeming to allude to his country’s ballistic missile program. The following are excerpted remarks by Rouhani. 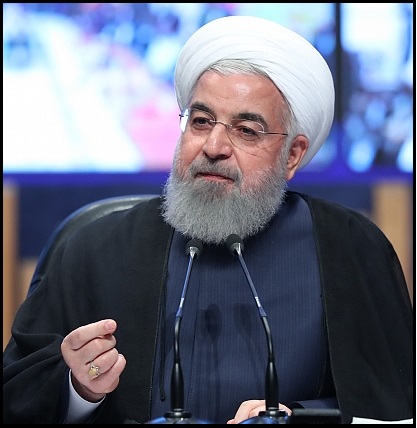 “We have proved to the world that Iranophobia is a lie and conspiracy and that’s Iran's [alleged ambition to] use an atomic bomb is propaganda against the Iranian nation.”

“Trust in foreign relations is relative and never absolute and in today's world, we acted based on a set of principles and reached an agreement which in addition to the negotiating parties, the United Nations endorsed.”

“The main purpose of the U.S. government was to restrict Iran's independence, power and regional influence.”

“They never want any country to be independent and stand on their own feet. This is the reason why they are always upset about Iran's independence, because during a period in the past regime [under the Shah], they used to interfere in all affairs of the country, including the election of the prime minister, but today, they have no place in Iran.”

“If the goal of the US is to not let our country have autonomy and influence in the region, our people will stand against them as in the past 40 years.”

“If today Americans take a step contrary to their commitments, public opinion and the governments around the world, with the exception of a few countries, will condemn the U.S. and not blame Iran.”

“Also, if the U.S. takes a step today, this is the only U.S. action, and it is not a move that the [U.N.] Security Council will support like the past.”

“The public opinion of the Iranian nation always knows that America is acting cruelly against us, but today it's clear that we have been committed and adhered to commitments.”

“People must be sure that we are considering the necessary decisions for different U.S. scenarios and that U.S. will suffer serious damage.”

“In this regard, either what we want from the JCPOA will be provided without the U.S., or if we see what we are want has not been achieved, we will have our plans.”

"If our goals in the JCPOA can be achieved without the United States, that's better. Otherwise, we will make our decision.”

“This problem can never be long-term, and if the United States makes a mistake, it will later regret it and realize that it has made a strategic mistake.”

—May 7, 2018, in a meeting with officials and business leaders of Khorasan Razavi province in Mashhad

“We don't favor war and tension, but [we] will strongly defend our rights.”

“We all tried since 2013 to advance the foreign policy of the Islamic Republic of Iran with the lowest price and dignity. We wanted to tell the world that nuclear sanctions against Iran were wrong and some world powers must retreat from this decision.”

“We took the first step of breaking sanctions in 2013 and continued along that path.”

“After the JCPOA, petrochemicals, selling oil, and insurance went back to their normal state.”

“We have lived up to our obligations in the Joint Comprehensive Plan of Action.”

“It's been for 15 months now that Trump is describing the JCPOA as the worst agreement in the history of the United States.”

“The world praises Iran's commitment and logic, except for the new U.S. administration, the vicious Zionist regime [Israel] and Saudi Arabia.”

“From months ago, the necessary instructions have been issued to the Atomic Energy Organization and economic sectors; we are ready for any decision about the JCPOA.”

“We tell the world explicitly that we will not negotiate our defensive weapons with anyone.”

“It's none of anybody's business what decisions we have made for defending ourselves.”

"The U.S. will not be able to do anything against the Iranian nation."

"If the U.S. exits the JCPOA, it will soon regret it.”

—May 6, 2018, in an address to Sabzevar in Khorasan Razavi province