On June 26, President Hassan Rouhani accused the United States of waging a “psychological, economic and political war” against Iran. “The U.S. cannot defeat our nation, our enemies are not able to get us to their knees,” he said at an annual conference organized by the Judiciary. He blamed “foreign media propaganda” for the devaluation of Iran’s currency, the rial.

Rouhani’s comments came one day after economic hardships sparked protests at Tehran’s Grand Bazaar and in front of parliament. Thousands participated in the demonstration, the largest in the capital since 2012, when international sanctions on Iran were tightened. Riot police used tear gas to disperse the crowd.

Iran’s economic problems have been mounting for several months. In December and January, it witnessed widespread protests over high prices and corruption. Anti-government demonstrations quickly spread to some 75 cities and towns. More than 20 people reportedly died in clashes with security forces and more than a 3,000 were arrested. But Tehran did not witness large demonstrations.

In April, the rial’s value declined rapidly, triggering a race on foreign currency and public panic. The devaluation led to a quick rise in the price of imported consumer goods, making items such as electronics difficult to sell. The U.S. withdrawal from the nuclear deal in May prompted major European and Asian businesses to wind down their business in Iran. The following is a rundown of the latest economic unrest in June.

Iran’s rial a record low against the U.S. dollar on the unofficial foreign exchange market. One dollar was being exchanged for as much as 90,000 rials, compared to some 75,500 just three days prior. The prices of British pounds, Euros and gold coins also spiked. Cell phone sellers at the Aladdin and Charou shopping centers in central Tehran shut down their stores to protest. Protestors reportedly chanted “We don’t want dollars at 100,000 [rials].” Videos circulated widely on social media.

Money traders stopped buying and selling dollars at the black market, according to the Iranian Student News Agency.

Later in the day, Information and Communications Technology Minister Mohammad Javad Azari Jahromi tweeted that he had met with the merchants. “I will try to help provide hard currency for [importing] equipment,” he wrote. “The merchants resumed their normal activity.”

A protest against rising prices and the rial’s devaluation broke out in Tehran’s Grand Bazaar. Videos posted online showed that some merchants closed their stores to join the protest, while those who refused were called cowards by demonstrators.

Thousands took to the streets and marched towards parliament, about 1.25 miles from, the Grand Bazaar.

Demonstrators, in a rare act of defiance, chanted criticism of Supreme Leader Ayatollah Ali Khamenei, who has held the position for nearly three decades.

Protestors also shouted slogans critical of the government’s foreign policy, including supporting the Assad regime in Syria’s civil war, which has cost the regime much blood and treasure.

A video showed a police motorcycle that was reportedly set on fire by protestors. Riot police fired tear gas to disperse the crowd.

Elsewhere in Tehran, protestors called merchants in the Charsou mall to close their shops again.

Protesters also entered the Charsou mall and chanted, “Close it! Close it!” to shopkeepers.

Yesterday, Charsou was one of two malls that became protest areas over the climbing Iranian rial (It was 91,000 to the USD on the black market). pic.twitter.com/refuUaY3S4

Bazaar merchants reportedly went on strike in several other cities, such as Shahriar, Ahvaz, and Qeshm Island in the Strait of Hormuz.

Information and Communications Technology Minister Azari Jahromi published a list of 40 companies who received some 220 million euros ($258 million) from the government at the official exchange rate to import cell phones but sold the products at the black market rate. Most of the companies, however, did not import phones. “Less than one third of it [the currency] was used for the purpose,” he said. Reformist and conservative politicians lauded the minister’s attempt to rein in corruption. Social media activists demanded more transparency.

In a televised speech at a judiciary conference, President Rouhani reassured Iranians that the government could handle the impact of U.S. sanctions and satisfy the public’s needs. The following are excerpted remarks. 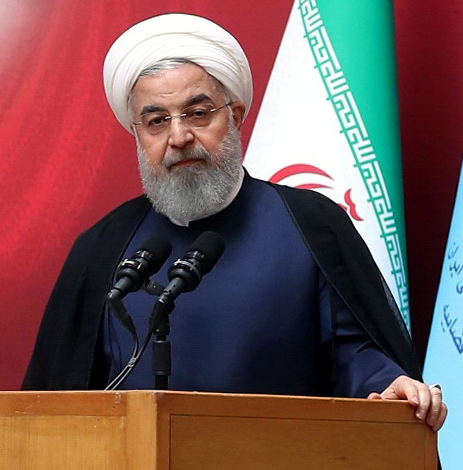 “Today, a great burden is on the shoulders of the three branches and the goal of the United States is to break our nation's trust and hope.”

The “U.S. wants to break our nation down with psychological and economic war.”

The “U.S. failed and is making its unilateral sanctions against Iran a cross-border issue.”

“We took back our right in the global oil market, and these successes have not made the U.S. and Zionists happy.”

“The first attempt of the new U.S. government was to make Iran exit the Joint Comprehensive Plan of Action (JCPOA) to be able to reclaim security issues regarding our nuclear case.”

“They put International Atomic Energy Agency (IAEA) under pressure for reporting against Iran, but our authorities foiled this plot with wisdom and resistance.”

“The United States withdrew from its commitments under the JCPOA with the highest price possible.”

“The great wish of Trump was that we would exit the deal after him.”

“Our income has increased in recent months compared to our expenses.”

“We have no real shortage and the enemies are after making our people worried.”

“We have allocated 1 trillion tomans for supplying water to regions that suffer water shortage.”

“Even in the worst case, I promise that the basic needs of Iranians will be provided. We have enough sugar, wheat, and cooking oil. We have enough foreign currency to inject into the market.”

“Decisive fight against corruption and addressing economic cases swiftly lay the ground for security of investment.”

“Increasing people's trust and hope is the best solution for stability of our system and economy.”

Judiciary Chief Ayatollah Sadegh Amoli Larijani blamed the turbulence in the currency, housing, automobile and gold markets on “economic saboteurs” and Iran’s enemies. “In recent days some tried to shut down the bazaar, but their plot was thwarted by the police,” he said at the judiciary conference.

The government announced that it would tax individuals buying or selling $5,000 or more in foreign currencies to discourage people from exchanging their rials to earn profit.

Supreme Leader Ayatollah Ali Khamenei said the judiciary is responsible for establishing security in the economic arena. “The business, life and livelihood of the people must be secure; the judiciary branch must confront those who disrupt the economic security,” he said during a meeting with judiciary officials.

In some governmental, public and business sectors there exists corruption, but existence of an overall corruption is not accurate, and such a wrong notion should not be injected into public opinion.

Revolutionary Guards General Yahya Rahim Safavi, a senior advisor to Khamenei, said Iranians “must neutralize the plans of the enemy for an economic war and psychological operations.” He said it was a national duty to help the government solve economic problems.

The Iranian government is squandering its citizens’ resources, whether its adventurism in Syria, its support for Hizbollah, Hamas, and the Houthis, or its ambitions for wastefully expanding its nuclear program, it will only add to the suffering of the people of Iran. As I have said before, it should surprise no one that protests continue in Iran. The Iranian people are demanding their leaders share the country’s wealth and respond to their legitimate needs. We condemn the government’s same futile tactics of suppression, imprisonment of protestors, and the denial of Iranians’ frustrations. The people of Iran are tired of the corruption, injustice, and incompetence from their leaders. The world hears their voice.

Those who live in glass houses shouldn't throw stones.