On July 22, President Hassan Rouhani warned President Donald Trump against taking hostile actions toward Iran. “Don’t play with the lion’s tail; you will regret it,” Rouhani said at a meeting of Iranian diplomats. The Islamic Republic’s “enemies must understand well that war with Iran is the mother of all wars and peace with Iran is the mother of all peace.” Rouhani emphasized that his country was not seeking a conflict but would not be intimidated. He dismissed U.S. efforts to halt Iranian oil exports and claimed that Iran has a dominant position in the Persian Gulf and the Strait of Hormuz, where some 20 percent of the world’s exported oil transits. In early July, Rouhani had hinted that Iran could disrupt oil shipments if the United States continued to pressure other countries to stop buying Iranian oil.

President Trump responded to Rouhani in a late-night tweet on July 22.

To Iranian President Rouhani: NEVER, EVER THREATEN THE UNITED STATES AGAIN OR YOU WILL SUFFER CONSEQUENCES THE LIKES OF WHICH FEW THROUGHOUT HISTORY HAVE EVER SUFFERED BEFORE. WE ARE NO LONGER A COUNTRY THAT WILL STAND FOR YOUR DEMENTED WORDS OF VIOLENCE & DEATH. BE CAUTIOUS!

Trump did not elaborate on what the consequences would be of continued threats. On July 23, a reporter asked if he had any concerns about provoking Iran. “None at all,” he said. National Security Advisor John Bolton echoed Trump's warning. “President Trump told me that if Iran does anything at all to the negative, they will pay a price like few countries have ever paid before,” he said. On July 24, Secretary of Defense James Mattis said Trump was “making clear that Iran is on the wrong track.” Mattis told reporters that Iran needs to “shape up and show responsibility” rather than acting “as a revolutionary organization that is intent on exporting terrorism, exporting disruption across the region.” On the same day, Trump said that the United States is “ready to make a real deal with Iran.”

Foreign Minister Mohammad Javad Zarif responded to Trump with his own tweet.

COLOR US UNIMPRESSED: The world heard even harsher bluster a few months ago. And Iranians have heard them —albeit more civilized ones—for 40 yrs. We’ve been around for millennia & seen fall of empires, incl our own, which lasted more than the life of some countries. BE CAUTIOUS!

Rouhani’s threatening language was not out of the ordinary. For decades, Iranian officials have condemned U.S. policies. Excerpted remarks from Rouhani's initial speech are below, followed by reactions to Trump's tweet by Iranian officials. 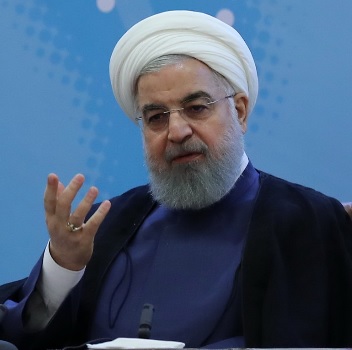 “The current U.S. administration is fighting the world and its own national interests at the same time.”

“The current U.S. President is both a threat and an opportunity.”

“The Iranian nation stood up to the puppet dictator [the Shah] for its freedom and independence.”

“There is nobody more interventionist than the U.S. against the Iranian revolution and people.”

“Overthrow, disintegration, boycott, and weakening are the main U.S. policies against the Islamic Republic of Iran.”

“During the Holy Defense years (the 1980-1988 war with Iraq), they [Americans] mobilized the entire world, except a few countries, against the Iranian nation, and they failed to achieve their goals".

“The enemy failed in its conspiracy to break and disintegrate Iran, the third conspiracy was imposing sanctions under the pretext of nuclear activity.”

“Whenever Europe was approaching an agreement with us, the White House didn't let them.”

“The Joint Comprehensive Plan of Action [JCPOA] signaled the failure of a 12-year plot against Iran's nuclear technology.”

“What the U.S. always does is conspiracy against Iran and the great Iranian nation.”

“Iran's strategic depth stretches in east to the subcontinent, in the west to the Mediterranean, in the south to the Red Sea, and in the north to the Caucasus.”

“The nature of Iranian culture is peace-seeking and helping neighboring countries against killers.”

“We rooted out ISIS and saved the peoples of the region, and we are proud of ourselves for that.”

“You supplied ISIS killers with weapons and money and now you claim advocacy of human rights?”

“Iran's influence in the region is historical and based on its civilizations.”

“We defeated terrorists at the expense of our young people's blood.”

“The JCPOA was a unanimous decision made by all pillars of our system.”

“The first goal of the U.S. was to make us violate the nuclear deal.”

“They incited the IAEA [International Atomic Energy Agency], but they failed again.”

“The third unsuccessful step of the U.S. was to convince Europe to change the deal. Trump tried a lot, but in the end, he had to exit the deal alone.”

“The United States opposes the whole world against the JCPOA.”

“The U.S. is now making a miscalculation by putting pressure on the Iranian nation to tire them and turn them into a rioting people.”

“The isolated U.S. mustn't be allowed to gain power again.”

“We are the land of science and wisdom, and we seek a good relationship with the world.”

“In the new situation, we are seeking to reform our relations with Saudi Arabia, the UAE [United Arab Emirates] and Bahrain.”

“The motto of ‘Neither the East nor the West’ has contradictions with what the East and the West do.”

“Our relations with Russia are based on neighborliness and mutual interests.”

“Anybody who knows a little politics doesn't say he will stop Iran's oil export.”

“We have a lot of straits; Hormuz is just one of them.”

“Mr. Trump! We are the people of dignity and guarantor of security of the waterway of the region throughout the history. Don't play with the lion's tail; you will regret it.”

“You declare war against the Iranian nation and at the same time speak of support?”

“Know your words and their consequences.”

“Today, speaking with U.S. has no meaning except surrender and the end of people's achievements.”

To Iranian President Rouhani: NEVER, EVER THREATEN THE UNITED STATES AGAIN OR YOU WILL SUFFER CONSEQUENCES THE LIKES OF WHICH FEW THROUGHOUT HISTORY HAVE EVER SUFFERED BEFORE. WE ARE NO LONGER A COUNTRY THAT WILL STAND FOR YOUR DEMENTED WORDS OF VIOLENCE & DEATH. BE CAUTIOUS!

COLOR US UNIMPRESSED: The world heard even harsher bluster a few months ago. And Iranians have heard them —albeit more civilized ones—for 40 yrs. We’ve been around for millennia & seen fall of empires, incl our own, which lasted more than the life of some countries. BE CAUTIOUS!

You, who has more than 50,000 troops under the blade of Iran and threatens [it] crazily. You need to be careful.

Speaker of the Parliament Ali Larijani

“The comments he made were undiplomatic and demagogic.”

“Trump needs to pick advisers who know Iran, know where it is located, what its history was, what ups and downs it has had, what a nation the Iranians are, and how they respond to hegemony and invasion of aliens.”

“The United States must know that the modern world and era is not an age of hegemony, bullying, consolidation, and unidirectional thinking anymore.”

“The United States must keep its limits and recognize its position at this point of time. It must also make greater efforts to understand the place and role of Iran.”

Trump and Rouhani “express themselves through speeches since diplomatic channels are closed.”

Unlike North Korea, “Iran never moved toward a nuclear bomb.”

“Iran is angry since Trump responded to Tehran’s engagement in diplomacy by pulling the U.S. out of the nuclear deal.”

There were “baseless comments and empty threats [made by] some U.S. leaders.”

“There is no need for us to respond to any nonsensical comment and answer them.”

“We should respond to them with action.”

“The Iranian nation's steadfastness, unity, integrity, and disregarding of their threats and plots, and choosing the path of resisting and attempting to foil the enemies' plots are the most powerful response to the cheap remarks of US rulers."

“The Iranian nation has opposed U.S. rulers' stubbornness and mistreatment in all fields since the beginning, choosing the path of resistance and steadfastness.”

“In addition to its attempts inside the country, the government has started legal and international measures, one of which is filing a lawsuit against the U.S. in the International Court of Justice.”

“U.S. sanctions are inconsistent with [U.N.] resolutions and their previous commitments and it is Iran's right to file lawsuit against the United States with international judicial organs, and the Iranian government has filed a complaint with The Hague.”

“The ICJ explicitly told the U.S. that they have no right to do anything until Iran's complaint is looked into. ICJ also warned the U.S. Secretary of State that he should be careful about his plans and actions in this regard. This is a warning to the U.S. by the world's highest legal reference.”

“Filing a complaint with the ICJ was the legal action. In the political field, this resistance continues and the fact that today an overwhelming majority of the countries around the world are calling U.S. actions incorrect or condemning it, or at least voicing regret, are signs of this resistance.”

“In its attempts to foil the conspiracies of the U.S., if the government considers feels necessary, it will add fresh members to its group and with regard to this fact, today it was decided that Dr. Hemmati be the new Governor of the Central Bank, and I offer him my congratulations for receiving the cabinet's vote of confidence.”

“In the banking field, we need to work harder and cooperate with the world, and despite U.S. conspiracies, our central bank has made good efforts in this regard.”

—July 25, 2018, during a cabinet meeting, according to the Associated Press and a press release

BREAKING: Gen. #Soleimani: If the US begins a war, Iran is the one that will finish it. You know such a war would mean the destruction of all your assets. IRGC Quds Force is your match. The Red Sea no longer safe for Americans.#تنگه_را_میبندیم pic.twitter.com/1vnPswZD7L

“We are closer to you than what you think. You should know that I am your foe. The Quds Force alone and not all the [Iranian] Armed Forces is enough to be your rival [in any confrontation]. You are aware of Iran's power in asymmetric war.”

“I, as a soldier, respond to Trump. Mr. Trump! How do you dare to threaten us?”

“You [the United States] did everything you could against Iran in the past 20 years, but victory belonged to the Iranian nation.”

“Ask the ex-commander of your forces in Iraq who he sent to me to ask me to open a window of opportunity by using my influence to stop attacks by Iraqi resistance forces on the U.S. soldiers so that they could withdraw from Iraq?”

“You should know that there is not even a single night that we don't think of destroying you.”

“We are so close to you in places that you might not even think of. Come to us! We are waiting for you. You know that this war (against Iran) means destruction of all of your possibilities. You may start the war, but we decide when it should end.”

“Do not threaten us with killing. We are thirsty for martyrdom and annihilation of arrogant powers.”

“There was a time when the U.S. enjoyed some awe, when its naval fleet started a voyage, a state would collapse, but today you have pinned hope on the MKO [Mujahedin-e Khalq] that has been buried in the wasteland of the history. Have you really pinned hope on a wandering woman that you take from one TV channel to another? Is that all your power?”