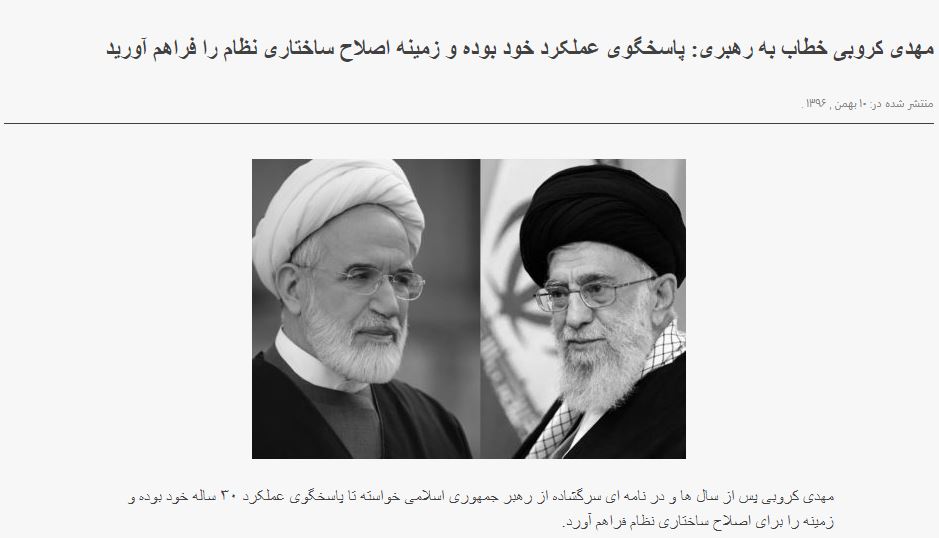 On January 29, opposition leader Mehdi Karroubi issued rare criticism of Supreme Leader Ayatollah Ali Khamenei in an open letter. “You have been Iran’s top leader for three decades, but still speak like an opposition,” wrote Karroubi in the letter published by Saham News, the official website of his reformist political party. The 80-year-old cleric and former parliamentary speaker, along with Mir Hossein Mousavi and wife Zahra Rahnavard, have been under house arrest since 2011 for their roles in the opposition Green Movement. Karroubi and Mousavi ran for president against incumbent Mahmoud Ahmadinejad in the 2009 election. The two became symbolic leaders of the Iranians who staged mass protests to dispute the results. Hardliners labeled them “traitors” and “seditionists.”

In 2016, Karroubi wrote an open letter to President Rouhani pleading to be formally charged and tried. “I want you to ask the despotic regime to grant me a public trial based on Article 168 of the constitution,” he wrote. “It will show which side continues in the path of the revolution and is honorable.”

In his latest letter, Karroubi rebuked elites for corruption and mismanaging the economy while 10 million Iranians live in poverty. He chided Khamenei for allowing the Revolutionary Guards to become heavily involved in the economy. Karroubi wrote that his house arrest was the price he has been paying for objecting to the Guards’ interference in the economy and politics.

From his 7+ year house arrest, Iranian opposition leader Mehdi Karroubi has written to SL @khamenei_ir demanding that he hold himself accountable to the people. https://t.co/XqOfEYdWbx pic.twitter.com/cWByX6SL0h

Criticizing Khamenei, Iran’s most powerful official, is a bold and potentially dangerous move. As supreme leader, he has either direct or indirect control over the executive, legislative and judicial branches of government, as well as the military and media. But Karroubi felt compelled to act after protests broke out across Iran in December 2017 and January 2018 in response to high prices, unemployment and government corruption.

Karoubi’s son says despite worries the family expressed to his 80 year old father about his health in result of 7 years of house arrest [and consequences of another critical letter to the leader] he insisted that it’s his religious duty & responsibility to the people to act. https://t.co/i2fjxgcQ1L

The following are excerpts from the letter translated by Reuters, Radio Farda and Middle East Online.

“You have been Iran’s top leader for three decades, but still speak like an opposition.”

“During the last three decades, you have eliminated the main revolutionary forces to implement your own policies, and now you should face the results of that.”

Allowing the Revolutionary Guards to become heavily involved in the economy “has tarnished the reputation of this revolutionary body and drowned it in massive corruption.”

“More than 50 percent of the country's wealth is in the hands of state bodies over which there is no supervision... Poverty and unemployment are plaguing the country.”

“Under such conditions [where 10 out of 80 million Iranians live in absolute poverty], it is natural that the lower classes, who were the grassroot supporters of the Islamic Revolution, will turn into a gunpowder barrel.”

“I urge you, before it is too late, to open the way to structural reforms of the system.”

The recent protests were inevitable given the depth of “injustice, corruption and discrimination.”

“The system is going downhill to such an extent that it feels endangered by a few thousand people demonstrating.”

“Instead of repeating accusations of links with the enemy and instead of harsh confrontation, listen to them.”

The Assembly of Experts, clerics and scholars tasked with overseeing and appointing the supreme leader, has turned into a “ceremonial council that only praises the Leader.”

“The political behavior of some of IRGC commanders has brought about political instability and created a despotism that has deprived the nation of its political rights and has put an end to the idea of the regime being a republic.”