Kevan Harris, Assistant Professor in the Department of Sociology at the University of California-Los Angeles, and Daniel Tavana, a PhD Candidate in the Department of Politics at Princeton University, have collaborated on a groundbreaking initiative focused on the political behavior and socio-economic relations of Iranians. The Iran Social Survey (ISS) is a multi-year, telephone survey research project. The first wave of data was collected in late 2016 and included a national sample of about 5,000 people.

The first brief focuses on how Iranians engage with the political process. “We find low levels of identification with national-level political factions, considerable heterogeneity in citizen preferences for presidential and parliamentary candidates, and divergence in where citizens receive information about politics,” wrote Harris and Tavana. The following are key findings from the report.

Men (61.8%) also report a slightly higher level of interest in politics compared to women (49.9%). Respondents from higher socio-economic status households, defined as those who are more educated and report higher levels of monthly household income, are also more likely to be interested in politics. 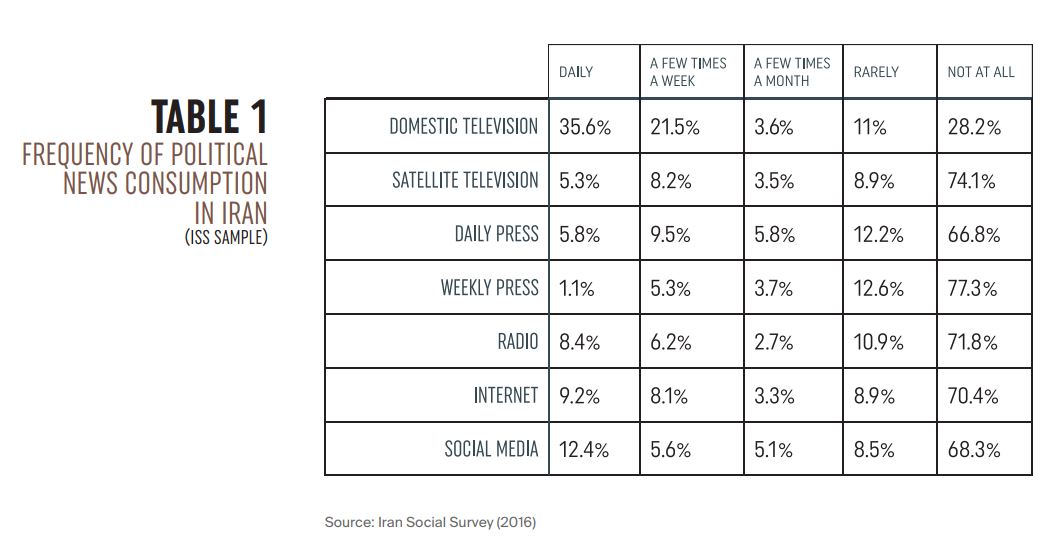 ISS respondents were also asked about the extent to which they support different political factions, as well as their ratings of prominent Iranian political leaders. Formal political parties have been inactive since the dissolution of the Islamic Republic Party (IRP) in 1987. In addition, many opposition parties were banned earlier, soon after the 1979 Islamic Revolution.

Following the IRP’s dissolution, national elites coalesce into what are colloquially referred to as “factions” during elections. These factions are comprised of networks of politicians and a small number of members of different civic and clerical associations. Factional competition intensifies during elections, but the extent of sustained citizen support for national-level factions has been difficult to assess.

In a sense, elections are the moments where factions, and the associations supporting them, function as “party” organizations. In the weeks prior to the 2016 Majles elections, these factions coalesced into several, often overlapping, lists for the purpose of supporting candidates for parliament. Liste Omid, or Hope List, was backed by leaders from the “Reformist” and “Moderate” factions, including incumbent President Hassan Rouhani. Etelaf-e Bozorge Osulgarayan, or Grand Principlist Coalition, was backed by Principlist (Conservative) leaders.

The fluidity of these groups, as well as the constantly evolving boundaries of elite competition, complicate efforts to measure what those who study political behavior refer to as partisanship. The ISS aims to measure the evolution in citizen preferences for changing Iranian factions over time. Respondents were asked: “Do you usually think of yourself as close [nazdik] to any particular political faction?” Those who responded negatively were asked, “Do you feel yourself a little closer to one of the political factions?” Those who did were asked: “Which faction do you feel yourself closest to?” Overall, 6.0% of Iranians identify as Reformist, 4.5% as Principlist, 1.1% as Moderate, and 1.1% with other factions.

Reported turnout rates among ISS respondents are consistent with those produced by Islamic Republic’s Ministry of Interior. In the ISS sample, 66.5% of eligible respondents voted in the Majles election. Of the respondents who were eligible to vote in a run-off, 49.5% voted in the second round. For the Assembly of Experts election, 61.7% voted.

Fluctuations between and within national-level factional cleavages, as well as the amorphous character of elite competition over time, may explain why few ISS respondents report feeling close to any single faction.

Many of the tried and tested survey strategies for measuring electoral behavior in other countries do not work in the Iranian context.

There is considerable heterogeneity, and a substantial degree of vote switching, across Presidential and Majles elections.

Campaigns in the Islamic Republic of Iran are short, but volatile and unpredictable.

The intensity and volatility of these campaign periods generate considerable citizen interest in the electoral process.

Despite stable citizen interest in the electoral process and high turnout, most Iranians decide who they will vote for during the campaign period.

Contrary to many of the images we see of mostly young Iranians at Reformist rallies, those under the age of 35 were slightly less likely to attend a campaign event in 2016 when compared to older age cohorts.