Iran’s Troubled Economy, By the Numbers

Iran’s economy was a key driver of the protests that erupted on December 28. Tens of thousands took to the streets to express their frustration with rising prices, unemployment, the gap between rich and poor, and corruption. The 2015 nuclear deal, which included sanctions relief, has not yielded significant benefits for the average Iranian.

President Hassan Rouhani acknowledged that the government must respond to core grievances. “Criticism about all affairs of the country is the right of the people,” he said a cabinet meeting on December 31, 2017. “It is true that steps have been taken, but the decline in people's purchasing power since five to six years ago has not yet been completely compensated; people have problems and these problems must be solved.” 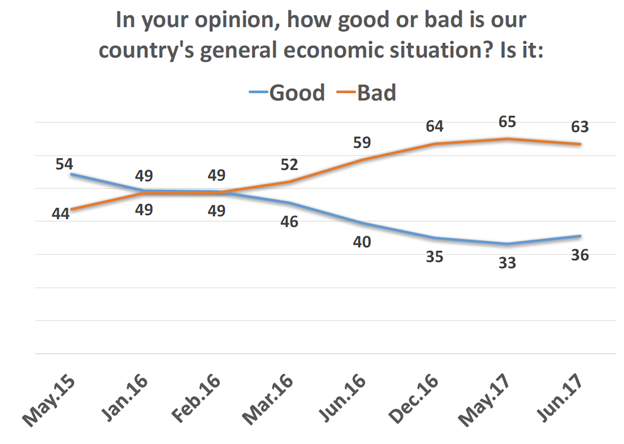 Source: Center for International and Security Studies at Maryland (CISSM) and IranPoll

The following is a rundown of key economic indicators. 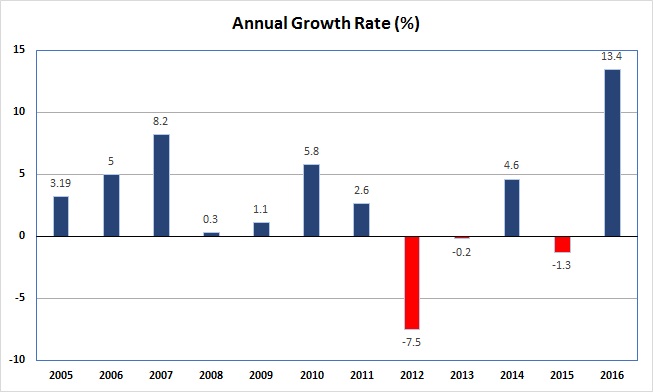 The nuclear deal triggered substantial growth in 2016, primarily in the oil and gas industry. The economy grew by 13.4 percent, a strong improvement from 2015, when it contracted by 1.3 percent, according to the World Bank.

But Iran did not receive the anticipated foreign investment. For foreign companies, investing in the Islamic Republic requires significant due diligence. U.S. and European sanctions for human rights abuses and support for extremist groups remain in place. Running afoul of sanctions can cost billions of dollars in fines and damage reputations.

The government also has been slow to enact financial sector reforms to attract more business. “Despite recent improvements in the business environment, Iran needs to reduce red tape, reform state-owned enterprises and improve transparency about corporate beneficial ownership to attract investment and develop the private sector,” the International Monetary Fund said in December 2017. It has projected a more modest GDP growth rate of 4.2 percent for the 2017/2018 fiscal year. 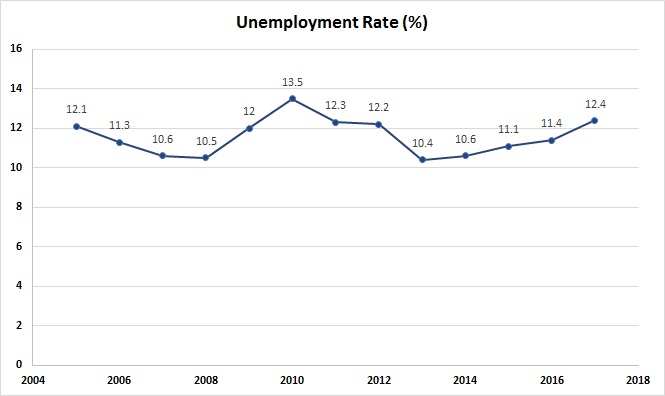 Since the nuclear deal was signed in 2015, economic growth has not translated into significant job creation. Unemployment in 2017 was 12.4 percent, up from 11 percent the year before, according to the Ministry of Economic Affairs and Finance. Unemployment in some cities is as high as 60 percent, according to Interior Minister Abdol-Reza Rahmani Fazli. The situation is likely worse than reported because the government considers anyone who works for an hour a week as employed. 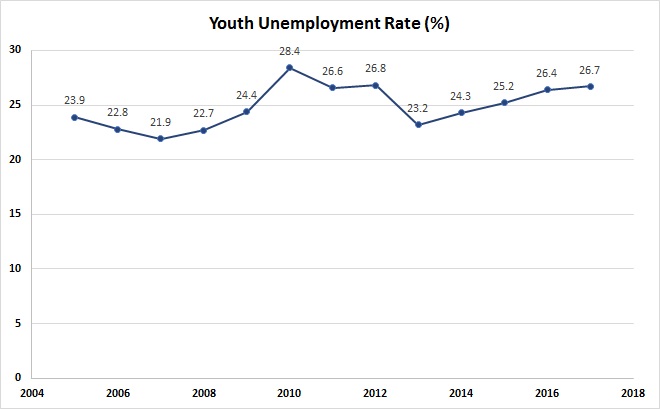 The oil sector, the biggest part of Iran’s economy, is not labor-intensive, so increased oil sales has not produced a proportionate number of new jobs. The labor market has generally not expanded to keep pace with the youth bulge. More than half of Iran’s population is under age 30. Youth unemployment, between the ages of 15 to 24, was approximately 26.7 percent in 2017, according to the International Labour Organization. 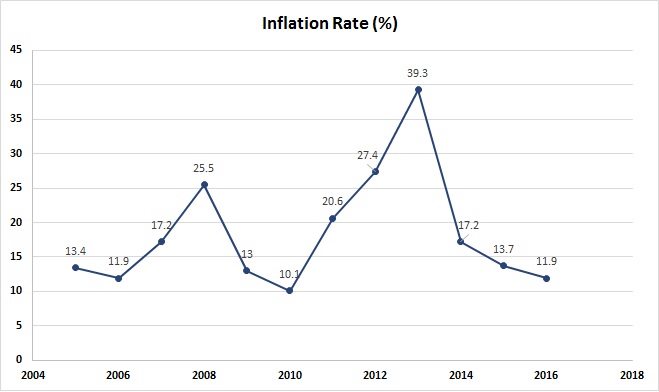 During his first term, Rouhani curbed inflation. When he took office in 2013, inflation had reached nearly 40 percent. By 2016, it was down to 11 percent, according to the Central Bank of Iran. Prices, however, have continued to rise. 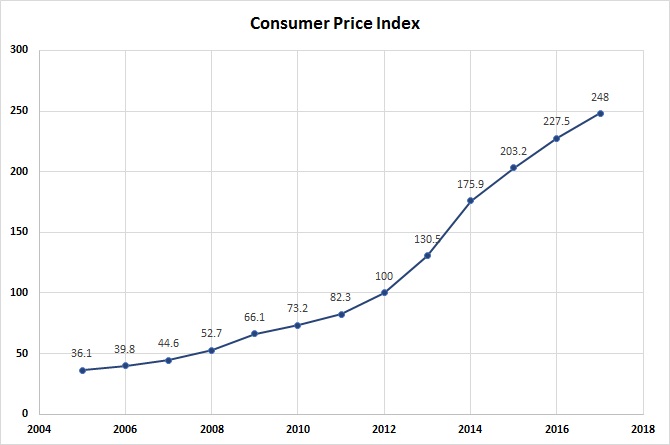 The cost of living for Iranians has steadily increased over the last decade, as indicated by the consumer price index (CPI). CPI is the most widely used measure of inflation, and is sometimes used as an indicator for effectiveness of a government’s economic policy, according the U.S. Bureau of Labor and Statistics. An increase in CPI means that a household has to spend more in order to maintain the same standard of living. This can be good for governments, but is mostly bad for households. 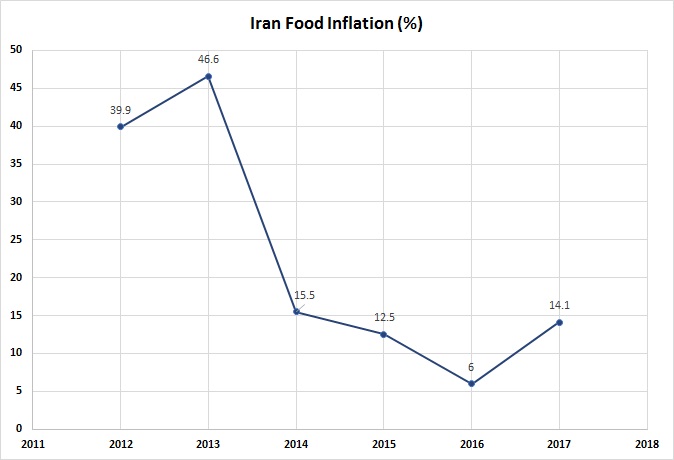 Food inflation has fluctuated over the last five years, but spiked in 2017. The cost of food increased 13.9 percent in November alone, according to Trading Economics. A recent surge in egg and poultry prices reportedly played a role in sparking the initial protests in December 2017.

The IMF ranked Iran’s GDP PPP (purchasing power parity) as the world’s 18th largest in its October 2017 report. PPP recalculates the value of a country’s goods and services as if they were being sold at U.S. prices, making it easier to compare economies. 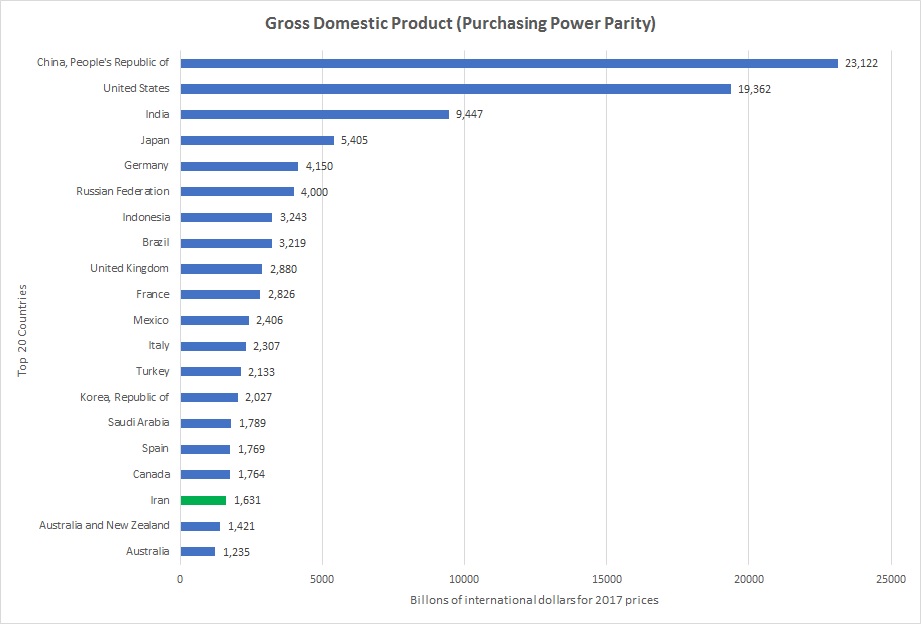