Khamenei: No War and No Talks with U.S.

On August 13, Supreme Leader Ayatollah Ali Khamenei rejected President Donald Trump’s offer of unconditional talks. He said the U.S. withdrawal from the 2015 nuclear deal was “clear proof” that Washington cannot be trusted. Khamenei gave several reasons for why Iran would not negotiate with the United States.

Why do we not negotiate with the U.S.? pic.twitter.com/4LDBfDjRw1

Khamenei also addressed widespread public concern over worsening economic conditions. “When the value of Iranian rial falls in such a manner, it is the daily-paid laborer who is left with nothing to live on,” he acknowledged. Khamenei said that government mismanagement was more detrimental than U.S. sanctions. “The committers of economic corruption are to be seriously confronted, with no compromise,” he warned. The following are excerpted remarks from his speech at Hussayniyeh of the late revolutionary leader Ayatollah Ruhollah Khomeini in Tehran. 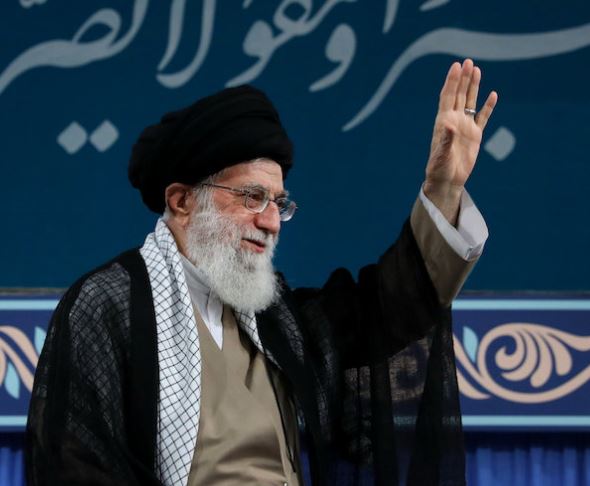 “The U.S. has become more blatant and ruder in their rhetoric over the past few months. Previously they were not so observant of diplomatic etiquette in their speech either; however, they have become ruder towards all nations.”

“The example of it is that during the last week, the Saudis committed two crimes: attacking a hospital and attacking a school bus with 40 or 50 innocent children on board. Do you have eight or nine-year-olds at home? This is a dramatic tragedy. It truly breaks one’s heart.”

“The news shook the global conscience. But how did the U.S. react? Instead of condemning the crime, the U.S. said, “We have strategic relations with Saudi Arabia.” Is this not [a sign of] shamelessness? What the U.S. president did to two or three thousand children by separating them from their parents, putting them in cages because they were immigrants is an unprecedented crime in history!”

“Recently, the U.S. officials have been talking blatantly about us. Beside sanctions, they talk about war and negotiations. Of course they do not openly talk about wars, but they intent to imply that there is a ghost of war that would scare the Iranian nation or scare those who fear.”

“They may not understand lots of things, but they probably do understand what the outcome of invading Iran would feel like [referring to the failed Operation Eagle Claw in 1980].”

Recently, U.S. officials have been talking blatantly about us. Beside sanctions, they are talking about war and negotiations. In this regard, let me say a few words to the people: THERE WILL BE NO WAR, NOR WILL WE NEGOTIATE WITH THE U.S..

Why do we not negotiate with the U.S.? pic.twitter.com/4LDBfDjRw1

#JCPOA was an obvious example of what negotiations with the United States would bear. We can enter a risky negotiation with the U.S. only when we have reached achieved the desired level of power in economy, politics and culture, so that U.S.'s pressures &uproars won't affect us.

Even if we ever—impossible as it is—negotiated with the U.S., it would never ever be with the current U.S. administration.

Unlike what some assume, U.S.'s offer of negotiation is not a new issue and it has been repeated over and over during the past 40 years, receiving a negative response from Iran.

Even Reagan, the then President of the U.S.—who was more powerful than the recent presidents—secretly sent McFarlane to Tehran for negotiations but he had to return after 24 hours without any outcome.

No war will occur as, like before, we will never initiate a war; U.S. won't launch a war either because they know that it would 100% end to their detriment; this is because Islamic Republic and Iranian nation have proved that any transgressor will be stricken a bigger blow.

A stupid man tells the Iranian nation that 'your government spends your money on Syria'. This is while his boss-- the U.S. president-- has admitted he spent 7 trillion dollars in the Middle East without gaining anything in return!

“The Islamic Republic can negotiate with the U.S. only when it reaches the favorable power and sovereignty that would nullify U.S.’s pressures and domineering efforts; when those efforts have no effect on Iran. Today this is not the case. Thus, I will ban negotiations with the U.S. just as Imam [Khomeini] did.”

On Economic Issues and Corruption

“Scholars and many officials believe that the problem rises from within the country. The problem of gold coins and foreign currency unfolded due to negligence and mismanagement. People from all walks of life can feel the livelihood problems today. A group of the people are truly under extreme pressure. The inflammation rate in food and housing as well as other financial problems put pressure on the people.”

“Reduction of the value of national currency is a problem of the present economic situation. When the value of Iranian Rial falls in such a manner, it is the daily-paid laborer who is left with nothing to live on.”

Today's livelihood problems do not emerge from outside; they are internal. If actions are taken more efficiently, more prudently, more swiftly and more firmly, #sanctions cannot have much effect and they can be resisted. pic.twitter.com/Yyl9mz2oT9

“Those who commit corruption must be punished. When corruption and convicts of corruption are opposed, some may start to protest.”

“Some years ago, I wrote a letter to the heads of the three branches of power, indicating that corruption is like a seven-head dragon that needs to be totally obliterated. Know that economic convicts are going to be seriously confronted, with no compromise.”

“Some of the convicts might be sentenced to capital punishment, and some to imprisonment. I have reiterated, that encountering must be done justly, with appropriate meticulousness.”

“I have always been combating corruptions and convicts of corruption, and I still hold to my belief. But some go too far in their remarks, calling all as corrupts, by referring to the term systematic corruption; this is not true. It is true that even a little corruption is too much; but going to extremes is problematic in every aspect.”

“Supervision entities must be present with strength and awareness; the parliament (Majlis), the Judiciary Branch, and all the devout people should feel responsible and act vigorously. Any path leading to corruption must be shut down. In the matter of foreign currency and gold coins, if corruption was opposed, corruption would be blocked.”