The majority of Americans think the United States should participate in an agreement with Iran that lifts some sanctions in exchange for strict limits on its nuclear program, according to a new survey from The Chicago Council on Global Affairs. Notably, public opinion has remained consistent from 2016 to 2017 regarding the Iran deal.
Overall, 62 percent of respondents said that nuclear proliferation, from friendly or unfriendly countries, is a critical threat. Some 60 percent thought the United States should continue to honor the Iran deal, helping to deter the threat of nuclear proliferation. Respondents were also asked to self-identify politically as well as how favorably they view President Trump. Nearly three quarters of Democrats wanted to participate in a deal with Iran as opposed to 48 percent of Republicans and 58 percent of Independents. Some 44 percent of Trump’s core supporters, those who said they had a “very favorable” opinion of him, thought the United States should not withdraw from the deal.
The survey was conducted June 27- July 19, 2017 with a sample of 2,020 adults representative of every state and Washington, DC drawn from the 2017 Chicago Council Survey of the American public on foreign policy conducted by GfK Custom Research’s large-scale, nationwide online research panel. The margin of error is +/- 2.4 percent. The following are key results. 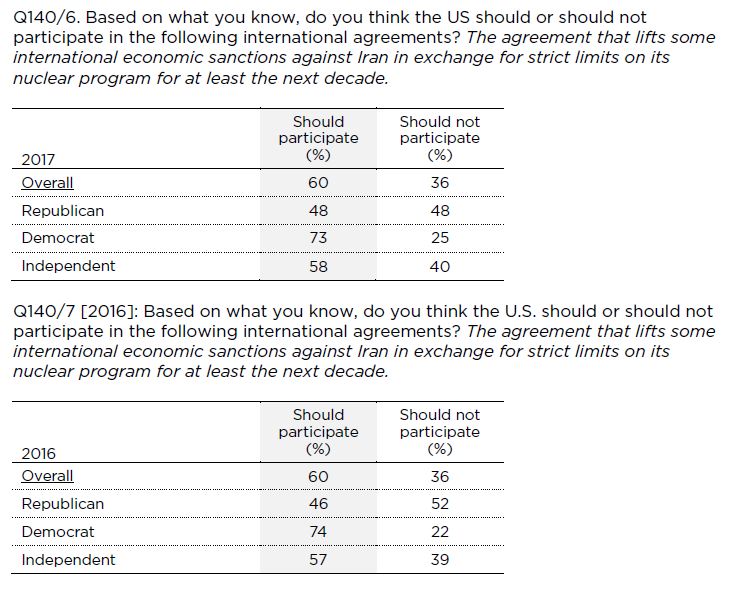